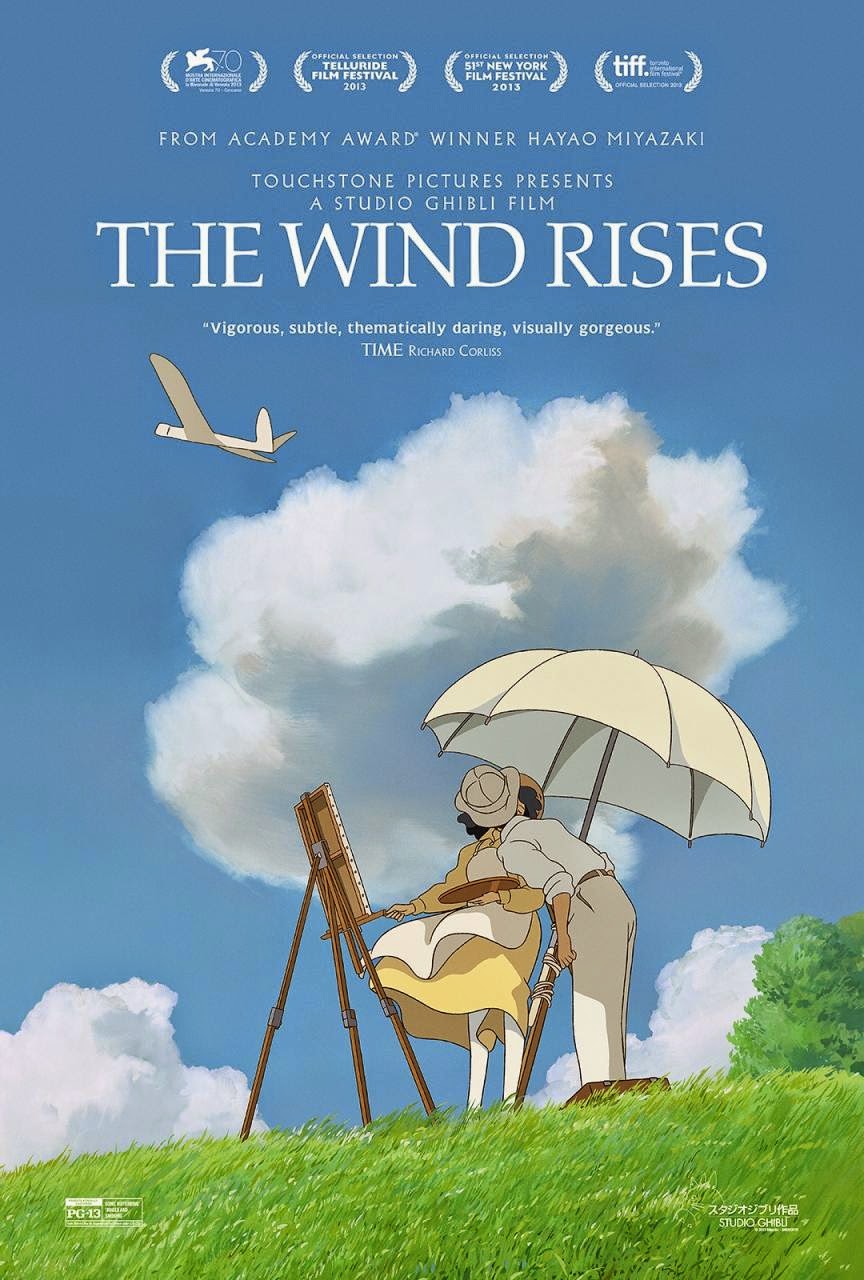 For the past three decades, Hayao Miyazaki has been viewed as the world's premiere animator. He proved to us that animation can’t be just dismissed as a genre for ‘kids.’ John Lasseter, one of the revered founders of Pixar and a film-maker, who revolutionized the animation movies, once said: “At Pixar, when we have a problem, we often take a Laserdiscs of one of Mr. Miyazaki’s films and look at a scene for a shot of inspiration. And it always works!” Later, the founders of Pixar, after taking over the Disney's animation department, cut out a deal to dub Miyazaki’s classic anime (voices were lent by established Hollywood actors) and release them in North American theaters. Miyazaki’s anime are famous for its lyrical details. He has bestowed us epic fantasies, children classics filled with warm humanity, humor and weird menageries. Miyazaki exquisitely blended Japanese mythologies with the themes like environmentalism, pacifism and feminism. His movies are both for pre-school and the mature.

The artistically incontestable Miyazaki has announced his retirement after making the elegiac historical fantasy “The Wind Rises” (2013). So, if this truly his retirement, then this anime feature represents an end of an era. “The Wind Rises” definitely won't appeal to kids (like “Totoro”, Spirited Away” or “Ponyo”), since this is a languidly paced biography of an aeronautical engineer. Rather than a mythical landscape, Miyazaki has chosen the most recognizable 20th century Japan for his tale. However, there is no doubt that this is yet another astounding work, loaded with unforgettable images and hidden meanings. 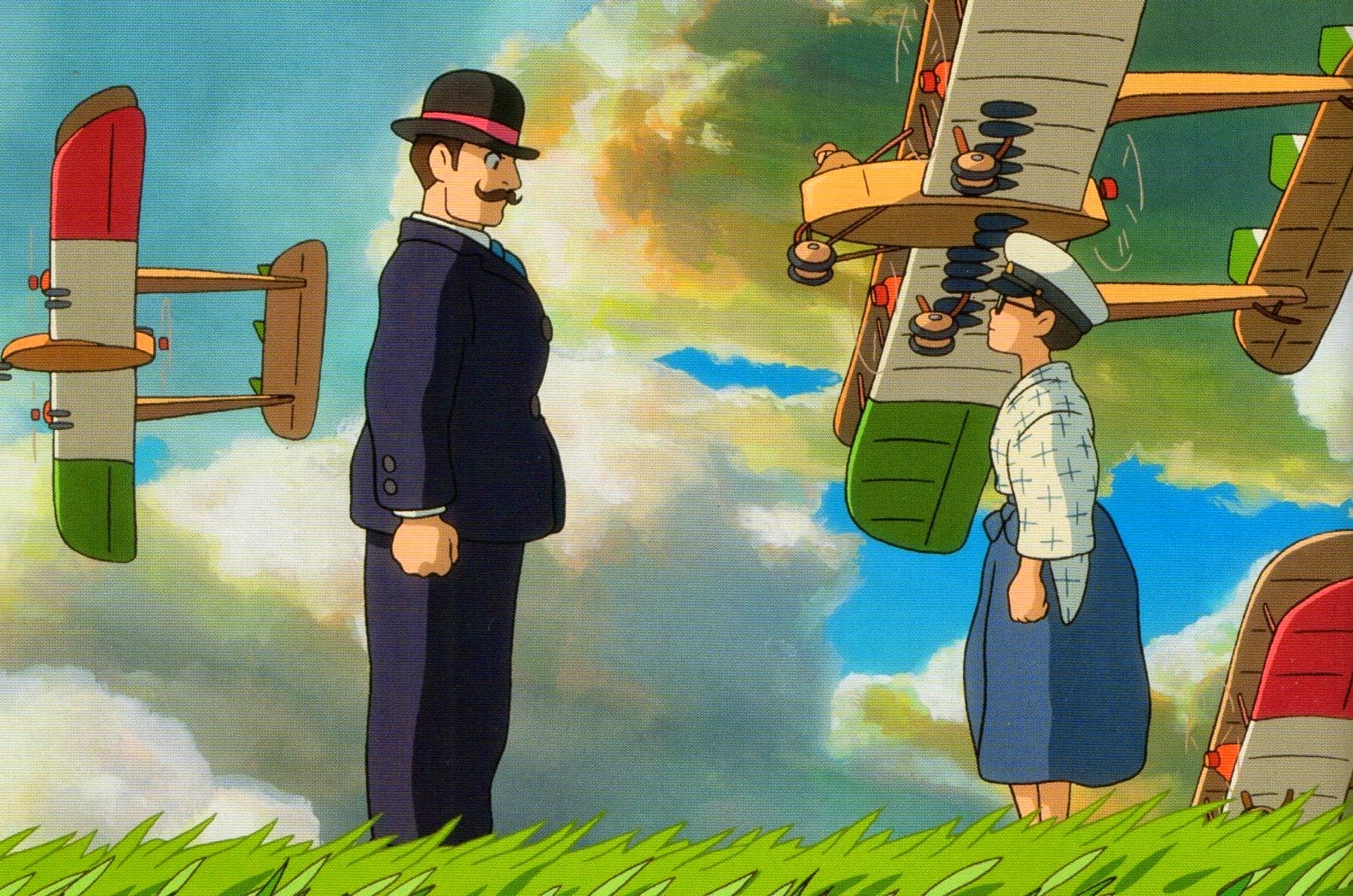 The film is set from a time toward the end of World War I to the end of World War II. When we first see the bespectacled boy, Jiro, he dreams about flight. He constantly sketches planes, pores over the designs in English-language aeronautical magazines, and in the dreams, he communicates with his hero – the Italian aeronautical engineer Gianni Caproni. Jiro’s chief flying machine designs are inspired by the curve of a mackerel bone. As a cultured young man, Jiro travels to Tokyo to find employment. In the train journey, he discusses French poetry with Nahoko, a pretty train passenger. He later saves her from the 1923 Great Kanto Earthquake.


The subplot traces their romance as they eventually get reacquainted (and she becomes his wife). The central story concentrates on the darker time of Japanese history as Jiro and his fellow engineer Honjo travel to Germany, to see how Germans are building warplanes. Jiro eventually builds the ‘Zero Fighter Plane.’ Jiro doesn’t want to craft a weapon of destruction, but he chooses not to wrestle with his conscience, but dedicates himself to making the fastest and most advanced planes possible. He also has to deal with a personal tragedy. 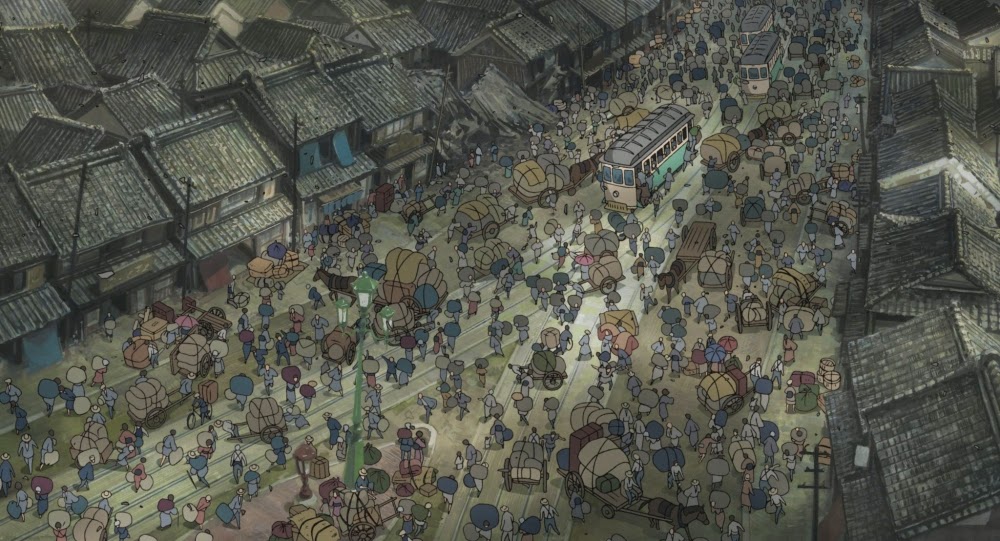 Miyazaki has faced a lot of criticisms for his portrayal of Jiro Hirokoshi. Jiro’s lightweight fighter plane, Mitsubishi Zero enabled many victories for Japan in World War II (including the Pearl Harbor attack). The Japanese right-wingers blamed Miyazaki for portraying Horikoshi as a man plagued by doubts and grievous premonitions. Other critics accused Miyazaki of downplaying the evil. They questioned the purity of Jiro’s dreams and stated that this film tries to whitewash the Japanese atrocities. However, Miyazaki stated that he never intended to make a political movie ("I wanted to portray a devoted individual who pursed his dream head on", Miyazaki said in an interview). If you look closely, the film is not about warfare; it’s about a young man, living his dream, even though it comes at a heavy price. Miyazaki, a pacifist, has given profound statements that regret his country’s aggression during the Second World War. He has criticized the current Japanese government for the debate on increasing the militarization. So, through “The Wind Rises”, Miyazaki tries to show how a young man’s dream could be transformed by the politics and put to use for a deadly purpose. 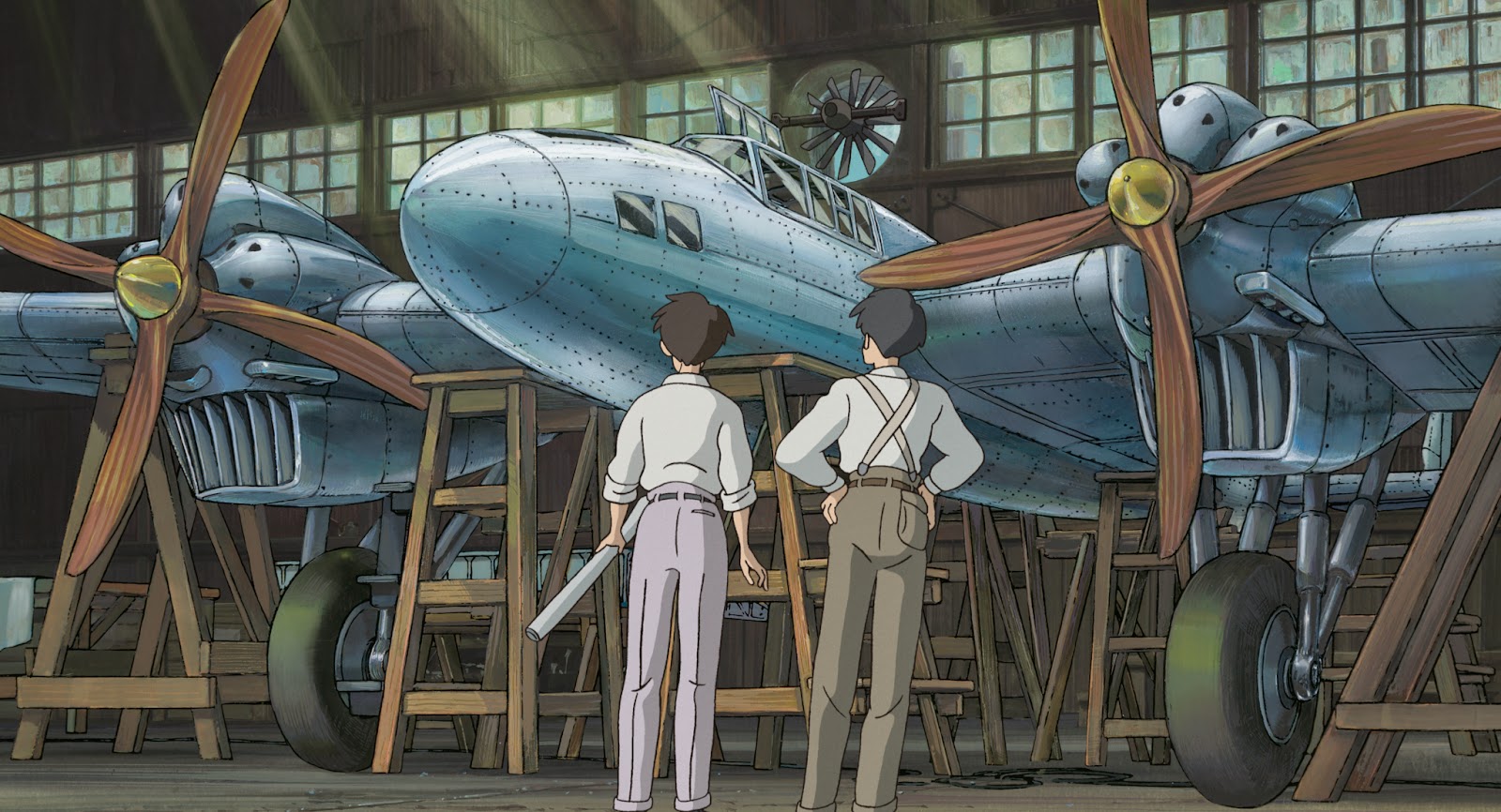 Miyazaki also ponders over the individual guilt of a scientist or an artist. In one of the dream sequences, Miyazaki’s and Jiro’s personal hero, Caproni says that airplanes are not instruments of war or ways of making money but “beautiful dreams.” However, Caproni, who also built warplanes for his fascist government – says he’d rather live in a world with pyramids (greatest wonder, but built by slaves, to honor tyrant kings). These words metaphorically state that every great human endeavor, more or less, had a bloodbath behind it. In the end, it is clear that Both – Jiro and Caproni --  were unhappy about the way their countries used their genius.


Though Jiro has been the Miyazaki’s titular subject, a lot of things are completely fictionalized. The main addition to Jiro’s life is the fictional character of Nahoko. The charming romantic re-connection and the melancholy moments that follows comes from the work of Tatsuo Hori, a writer of the pre-World War II era (one of his novel is titled “The Wind Rises”). There are also certain personal connections between Hirokoshi and Miyazaki: Katsuji -- Miyazaki’s father -- managed a munitions factory that made parts for the Zero fighter planes. Miyazaki’s mother suffered from tuberculosis like the fictional character Nahoko. Both the dreamers seem to have shared this paradoxical view: fighter planes are beautiful, but war is bad. 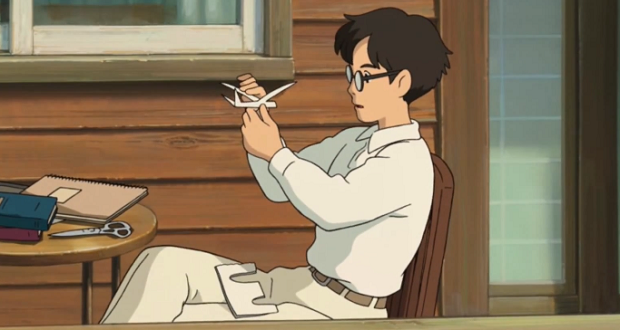 Miyazaki finely embraces the hand-drawn style, which is frowned upon by many viewers like a black-and-white movie. But, “The Wind Rises” and other Miyazaki films possess an amazing collection of details and artistry that couldn’t sometimes achieved by computer generated animation. These rich hand-drawn images never lessen our ability to relate to the characters. Miyazaki, once again, takes us through breath-taking landscapes, especially the agrarian Japan of 1920’s. The Great Kanto earthquake and the ensuing fire are conveyed through jaw-dropping visuals. 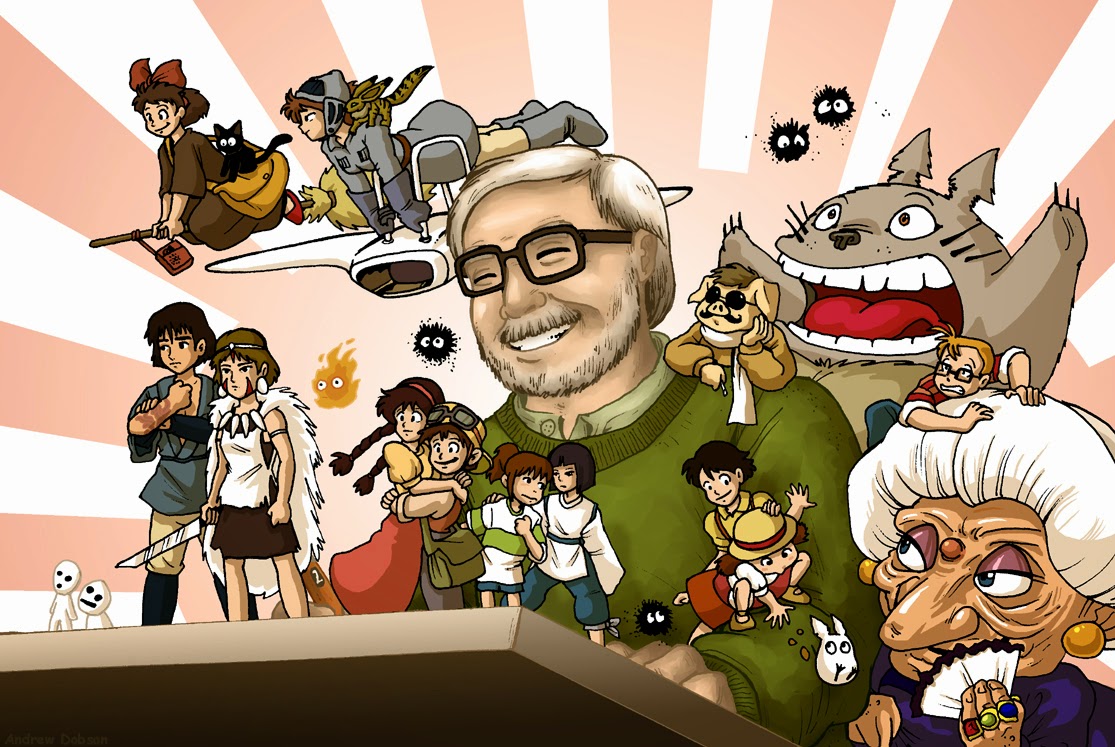 Hayao Miyazaki’s “The Wind Rises” (126 minutes) may not get absolute affections of people like his previous fantasy classics. However, his genius and artistry haven’t diminished a bit, as he once again deals with a complicated story and idea. This conflicted moral fable is truly a great farewell gift to all the movie-lovers.

I have never watched animation for adults. Other than the brief one in Kill Bill which is brilliantly depicted. Something that was an eye opener for me, in the way animation could be used. Will definitely try to watch this one..

@ themoonstone, thanks for the comment. The Japanese animes are more matured than the Hollywood counterpart. Animes have served as an inspiration for many innovative Hollywood sci-fi. Miyazaki blends in mysticism along with contemporary themes. Even a children movie made by him is more thoughtful.