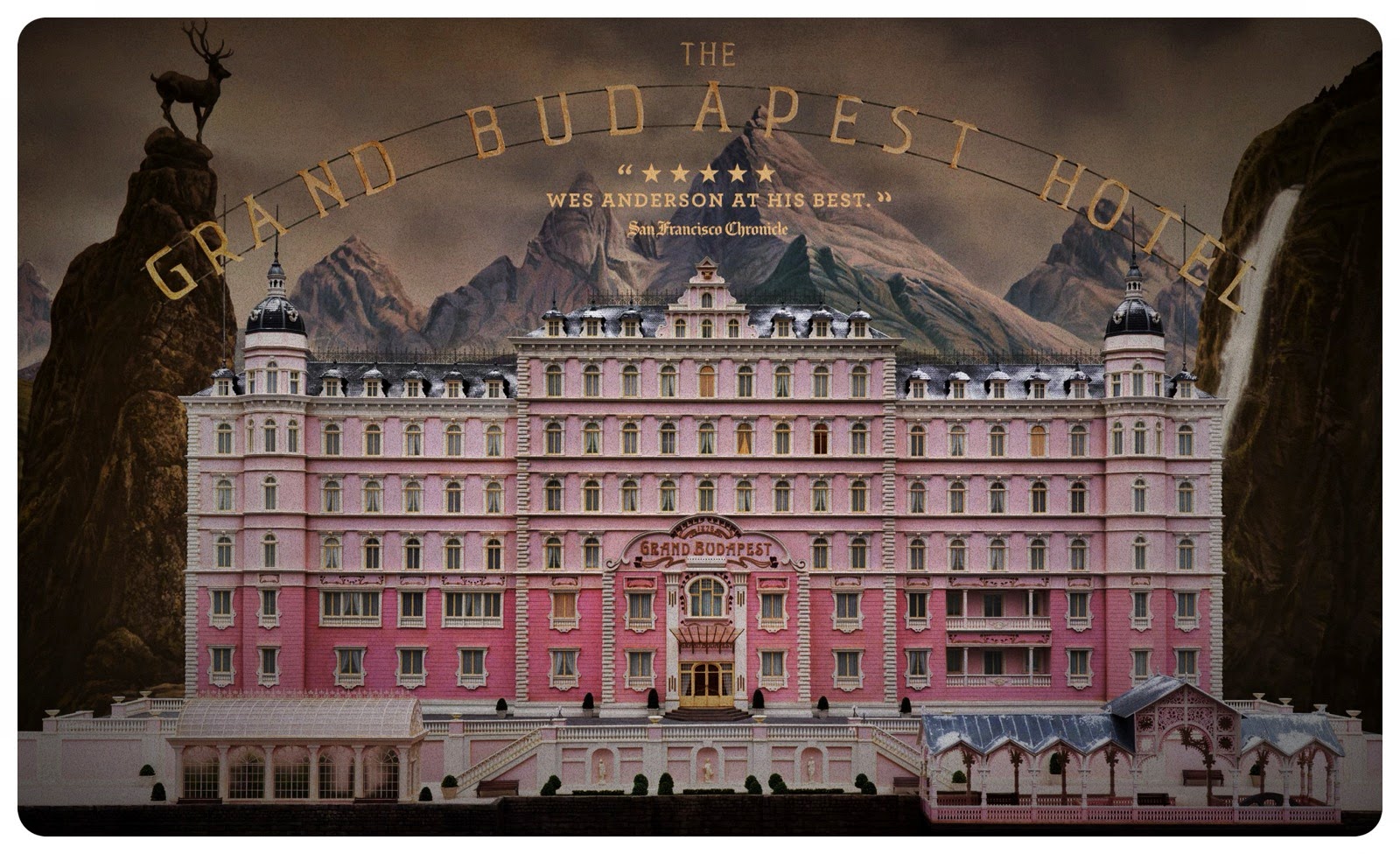 ‘Crimson carpets, pink walls, deep-purple blue jackets, bow-tied pink boxes of macaroons, cross-sectional doll houses, perfectly-balanced framing, cartoonish absurdity and witty dialogues that flies so fast’ – these are the essential ingredients for a film made by our generation’s whimsical director ‘Wes Anderson.’ Thematically too, you could point out a Wes Anderson movie. Nostalgia, loneliness and a disapproval of unbridled authority are some of his main themes. Al though the elements and themes are familiar, certain things makes me anticipate a Wes Anderson movie: he takes us for a ride through his great imagination; the way he closely weaves the fakery of his tightly sealed worlds with the mixture of comedy and drama; the way he delivers unexpected punch lines and visual puns; and the endless panache he exhibits. Of course, all these same reasons could be said by those who hate Wes Anderson’s films.

“The Grand Budapest Hotel” (2014), the master craftsman’s latest styling deals with a waning of historical memory. Once again Anderson shows no pretense to realism, but his familial pathos doesn’t derail the film in any way. The plot is nestled into different time frames and unpacked like a ‘Russian doll.’ A young girl in the present pays a tribute to the statue of dead author and opens his book titled ‘The Grand Budapest Hotel’; then the plot shifts to 1985, where the said author (Tom Wilkinson) narrates that the story inside the book is true; then the story shifts back further to 1968, where the author’s middle-aged self (Jude Law) takes a trip to Republic of Zubrowka and stays on half-derelict Grand Budapest Hotel. There he meets the infamous millionaire Zero Moustafa (F. Murray Abraham), who has forfeited much of his fortune to the authorities in return for keeping the hotel. 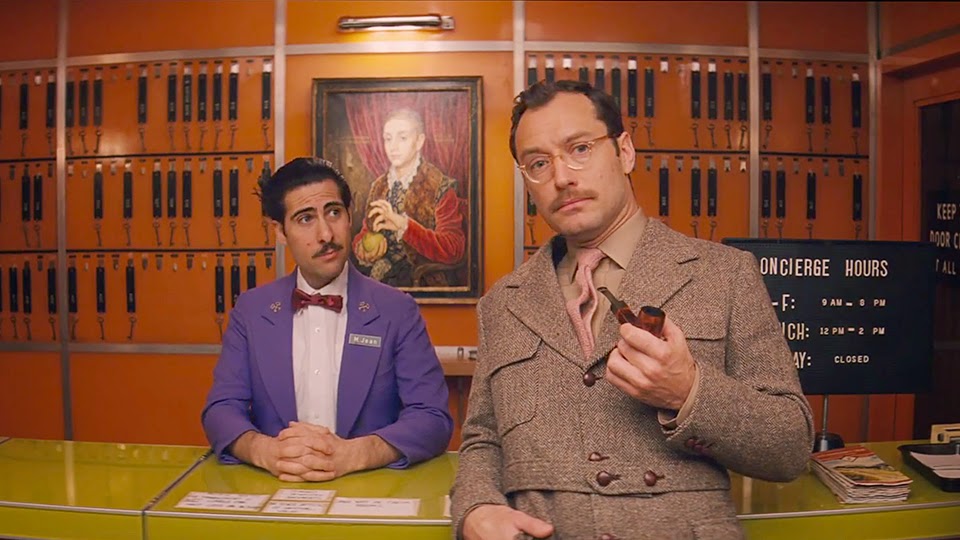 The plot once again shifts to an earlier time, when Moustafa tells his tale to the author over a long dinner in an empty dining room. Moustafa recounts the year (1932) he came to work at the hotel as an orphaned teenage lobby boy named Zero (Tony Revolori). At that time, the hotel was an eponymous five-star hotel, managed by legendary concierge Monsieur Gustave H. (Ralph ­Fiennes). Gustave ‘takes care’ of the hotel’s wealthy aging female clients. His favorite client is octogenarian Madame D. (Tilda Swinton). When Madame D is murdered, Gustave and Zero embark on a series of adventures that even accommodates ski chase and prison break. There’s also a budding romance between Zero and pastry Chef Agatha (Saoirse Ronan). And, in the background, we could feel the darkness of fascism descending upon Europe as rude-men in uniforms stomp the grounds, exhibiting no patience for civility. 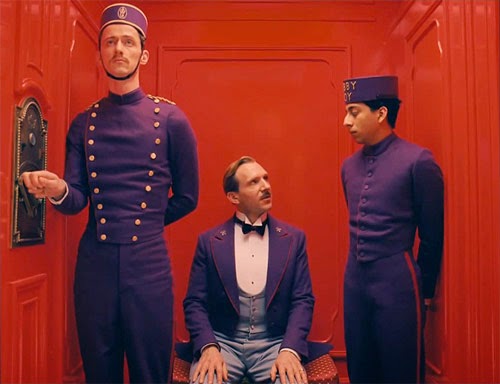 Anderson and his cinematographer Robert D. Yeoman have used different camera aspect ratios to indicate the passage of time. All the meticulously arranged images are a visual treat and also a comic delight. One of my favorite shot is the one, where Agatha and Zero ride on the merry-go-round. Zero gives Agatha a poetry book and there’s a close-up of her face in slow motion, which was such a stunning shot. As usual, the production design is impeccable. The mountainside hotel reached by a railway car is a dollhouse, but vistas expand once when we are inside the hotel’s lobby. The lobby, in the 1930’s is full of dreamy colors, but in the later years the colors turns shabby and diminished. The luxury of the spa, in the 30’s, later turns into a drab Eastern bloc facility laden with instructional signs.

Director Anderson passes a great tribute to the cinema of past by tipping his hat to genres such as prison drama, caper movie, war romance, screw-ball comedy and road movie. Gustave’s prison escape scenario with a tattooed Harvey Keitel owes a lot to Robert Bresson’s “A Man Escaped.” Anderson careens from one zany act to the other, but a melancholic undertone keeps up the movie’s spirit without making it silly.  Anderson places the primary part of the film in a historical time, where there is a sort of high-flown civility. Gustave flaunts this civility as he gets devoured by an insatiable, cannibalistic barbarism. The director perfectly uses the comic hyper-reality to look over the damaged textures of history rather than acknowledging the long painful 20th century European history in a veritable manner. At some point in the film, Murray Abraham’s Moustafa admires Grand Budapest, calling its current state as ‘ruin.’ It expresses how every generation’s notions of civilization differ. Similarly, Gustave laments about the degradation of civility, which could also be spoken across generations for many decades. 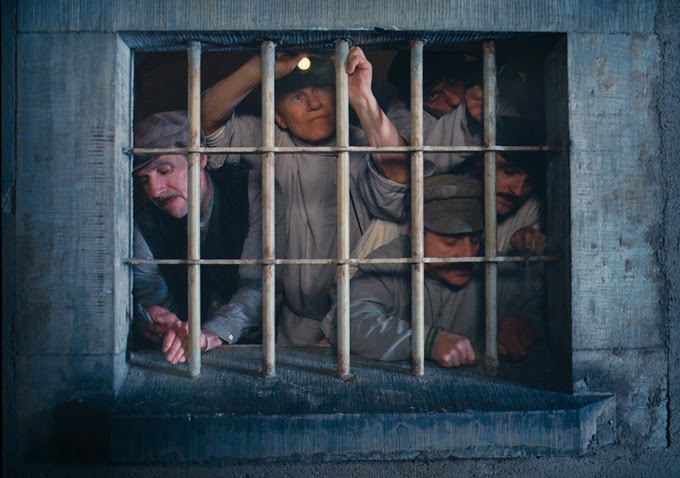 After playing many heavy characters in the last decade, it is good to see Ralph Fiennes showing his talent for playing dead-pan comic roles. He delivers all his curt lines with a British verbose authority.  Fiennes’ Gustave possesses all the character traits of Anderson’s, but he doesn’t come across as monotonous (similar to Gene Hackman in Anderson’s “Royal Tenenbaums”). The pathos and frustration exhibited by Fiennes grounds the movie, never allowing the zaniness to lift it off. The movie is filled the sundry guest turns that lends enough power to the proceedings. Edward Norton’s sensitive military commander, Willem Dafoe’s grim-faced assassin, Adrien Brody, Jeff Goldblum, Harvey Keitel, Matthieu Amalric, Bob Balaban, Lea Seydoux, Bill Murray, Jason Schwartzmann and Owen Wilson are part of pop-up cameos that have been a source of pleasure in Anderson’s movies.
“The Grand Budapest Hotel” is the grandest treats of one of the most creative minds making movies today. It confronts the troubled patches of history with an unexpected, intoxicating energy.

Ralph Fiennes is once again at his best, wonderful watch.

I enjoyed reading your review almost as much as I enjoyed watching the brilliant Wes Anderson film. And, you have summed it up pretty well but not without pointing out several important details about Wes Anderson's singular filmmaking style. The comparison to the Robert Bresson film is quite apt. Great work!!!

P.S. Here's the link to my review:

@ Murtaza Ali, Thank you. You are right, I have missed out many details about Anderson's film-making style. However, I am looking to write a separate article about Wes Anderson's quirky directing style.