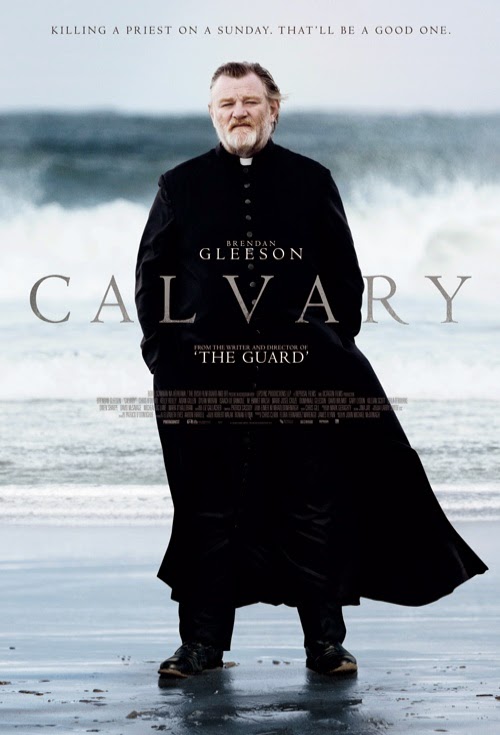 The McDonagh brothers, with two films apiece have become one of the interesting Irish directors. Martin McDonagh’s “In Bruges” and “Seven Psychopaths” were darkly funny, clever tales. John Michael McDonagh made his debut with an entertaining comedy “The Guard”, although it was a bit of a shaggy dog story. But, his recent film “Calvary” (2014) has taken everyone by surprise, since the trailer only promised another rollicking comedy, set in small Irish town. However, the movie is much darker than what was promised. It explores how difficult it is to retain faith in a world that seems to be filled with world-weary, unethical or corrupt men/women. The persistent of faith was a theme that was wonderfully inquired, previously by one of the masterful film-maker Robert Bresson. In fact, John McDonagh, himself has described his feature as “basically Bresson’s ‘Diary of a Country Priest’ with a few jokes thrown in”.

The movie starts in the darkness of a confession box as Father James Lavelle (Brendan Gleeson) hears: “I first tasted semen when I was 7 years old” from the other side. The unseen man goes on to explain how he has repeatedly raped by a priest over the course of five years. The unseen man also says that there is no point in killing the bad priest (the pedophile has also died) and so he has decided to kill a good priest aka Father James, since it would be much more shocking. The man gives Father James a week to put his affairs in order, before taking the fall on next Sunday. Father is left shaken, but uncertain about how he should deal this matter. At first, he thinks that he knows the identity of the killer, but certain confrontations make him unsure. 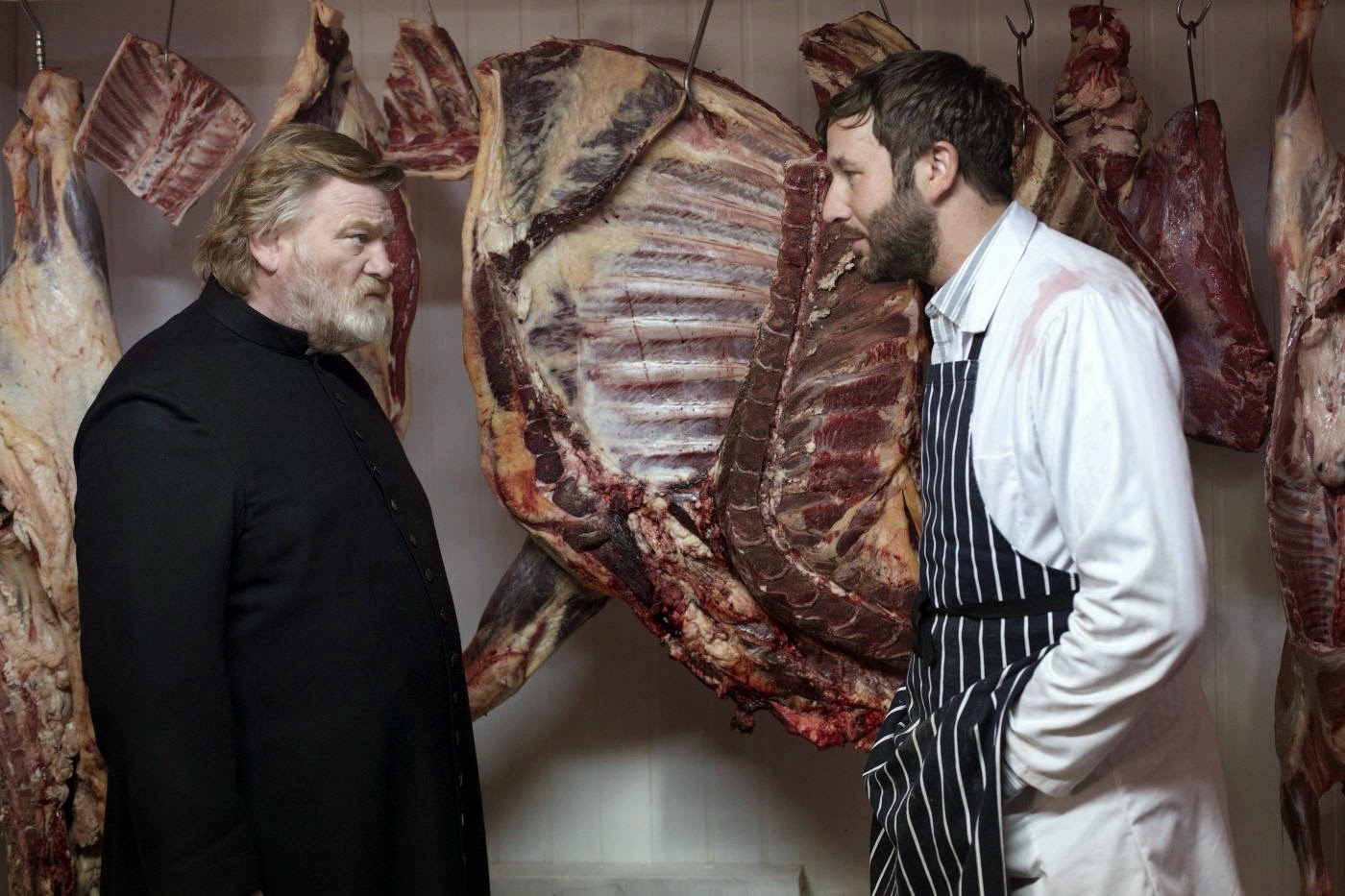 The coastal village Irish community is populated by people bursting with resentment at the church. They treat Father James like a mortal enemy. Father at least wants to tend to his flock in the remaining seven days. He meets a butcher (Chris O’Dowd), who is suspected of beating his wife, Veronica (Orla O'Rourke). The butcher points the finger at his wife’s immigrant lover (Isaach De Bankole). The butcher also adds in a relieving manner that he is happy about his wife finding a lover, because now he is free from her pestering.

Then the priest meets a variety of eccentric, tormented characters: a sinister police chief (Gary Lydon), who sarcastically comments about the church; a impish doctor (Aidan Gillen), a atheist, who only sees extreme suffering at the local hospital; a wealthy, corrupted banker Fitzgerald  (Dylan Moran), whose riches have only brought sorrow; a sex-starved young man (Killian Scott), who wants to join the army to feed his violent impulses; and a old American writer (M. Emmet Walsh), who demands a Walther PPK from the priest, in order to end life on his own terms. The intensity heightens when Father James’ trouble daughter Fiona (Kelly Reilly) appears after a failed suicide attempt. We get to know about Father James’ past life. He is a widower, who has adopted priesthood, abandoning his own daughter. He is also a heavy drinker and brawler, and struggles to restrain his personal demons. 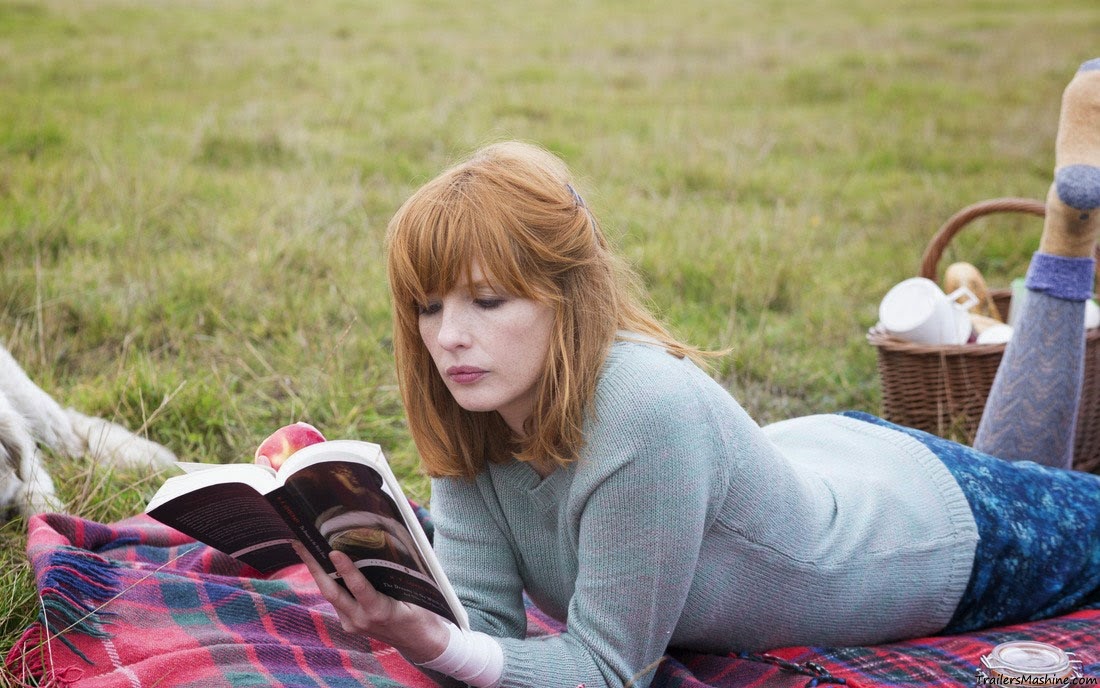 “Calvary” is not ‘who is gonna do it’ thriller. It is a moving drama about religious faith. The father isn’t determined to save his life or to find out the identity of wannabe killer. At every chance and at every confrontation he tries to make at least a little difference to these people’s troubled lives. McDonagh’s wise cracking dialogue repeatedly discloses smart one-liners, but at the same time you could detect the righteous anger, which transforms the movie from being a foul-mouthed comedy to a devastating passion play. The script doesn’t categorize the characters into ‘saints’ and ‘sinners’. They are just portrayed as human beings, encrusted with loneliness and superiority. Some might complain that most of the characters are one dimensional, with only one personality trait. But, I felt the characters were deliberately written like that, especially considering the limited time frame of the film. Also, McDonagh, through these characters has only tried to bring out the contemporary problems faced by church: sexual abuse, sexual dysfunction, greed and anachronism. 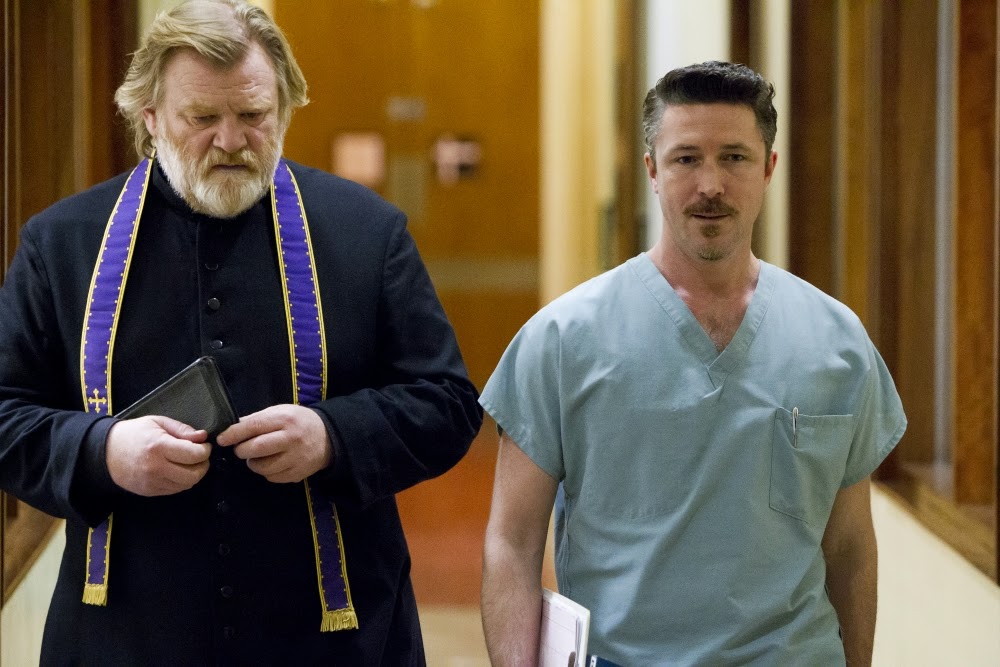 There are lots of ‘easy to decode’ biblical references in McDonagh’s script. The movie – and the priest’s desolate journey – takes place over seven days; the title comes from the small hill outside Jerusalem where Jesus was slain; Father James takes the fall for the sins of bad priests and corrupted men. In my opinion, two scenes stood out – one for its tenderness and other for its toughness: the beach side conversation between Father James and his daughter, who was still angry at him for his abandonment of her; the story of a deaf, dumb and blind child, which the doctor tells to priest. It was a cruel metaphor aimed at the priest to tell how he is trapped inside the idea of religion.
Brendan Gleeson’s Father James character was etched out in a complex manner than the other ones. Masterful surrealistic director Luis Bunuel has constantly excoriated Catholicism and its priests in his movies. McDonagh takes such route, but in the end he makes us feel for Father James. He infuses grace and poignancy into the character and Gleeson never hits a false note. Gleeson marvelously chokes-up his emotions as he takes a mental beating in most of the scenes. The bitter questions that hang over the film couldn’t have been vividly brought to life by another leading actor. 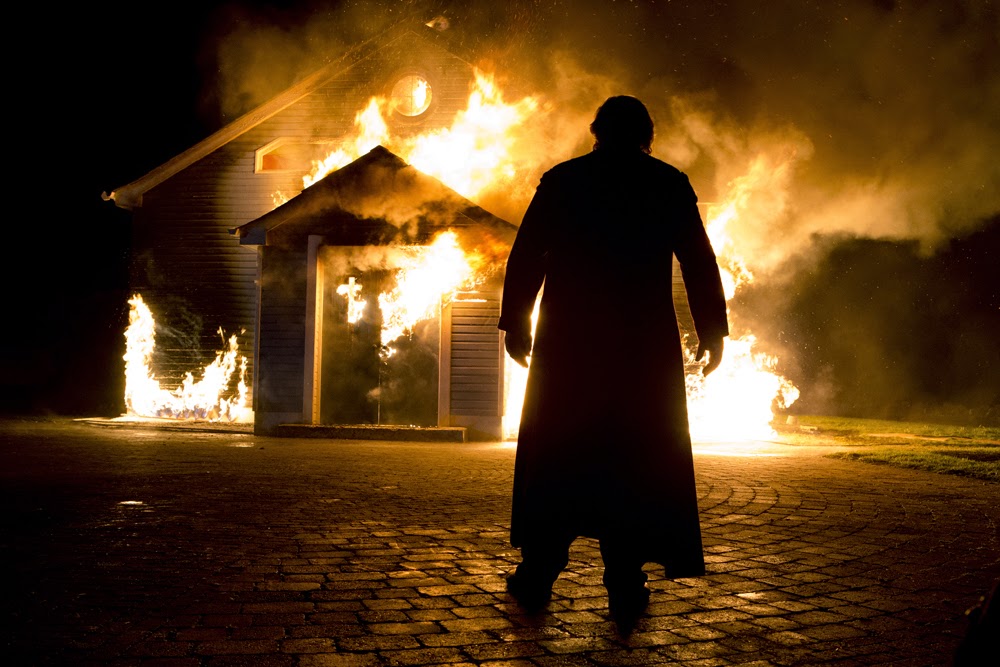 Michael McDonagh’s “Calvary” makes clear how the Church’s countless abuses will continue to take out more human lives. He seriously inquires on faith and what it means to certain kinds of person, without ever condemning religion, on the whole.

“You still have good priests who are being vilified just by the clothes they wear. That paranoia is there and it will always be there. But that doesn’t take away the fact that there are individuals trying to do good work. The reason they go into the priesthood is because they want to help other human beings.”
--- Director John Michael McDonagh [in an Interview]