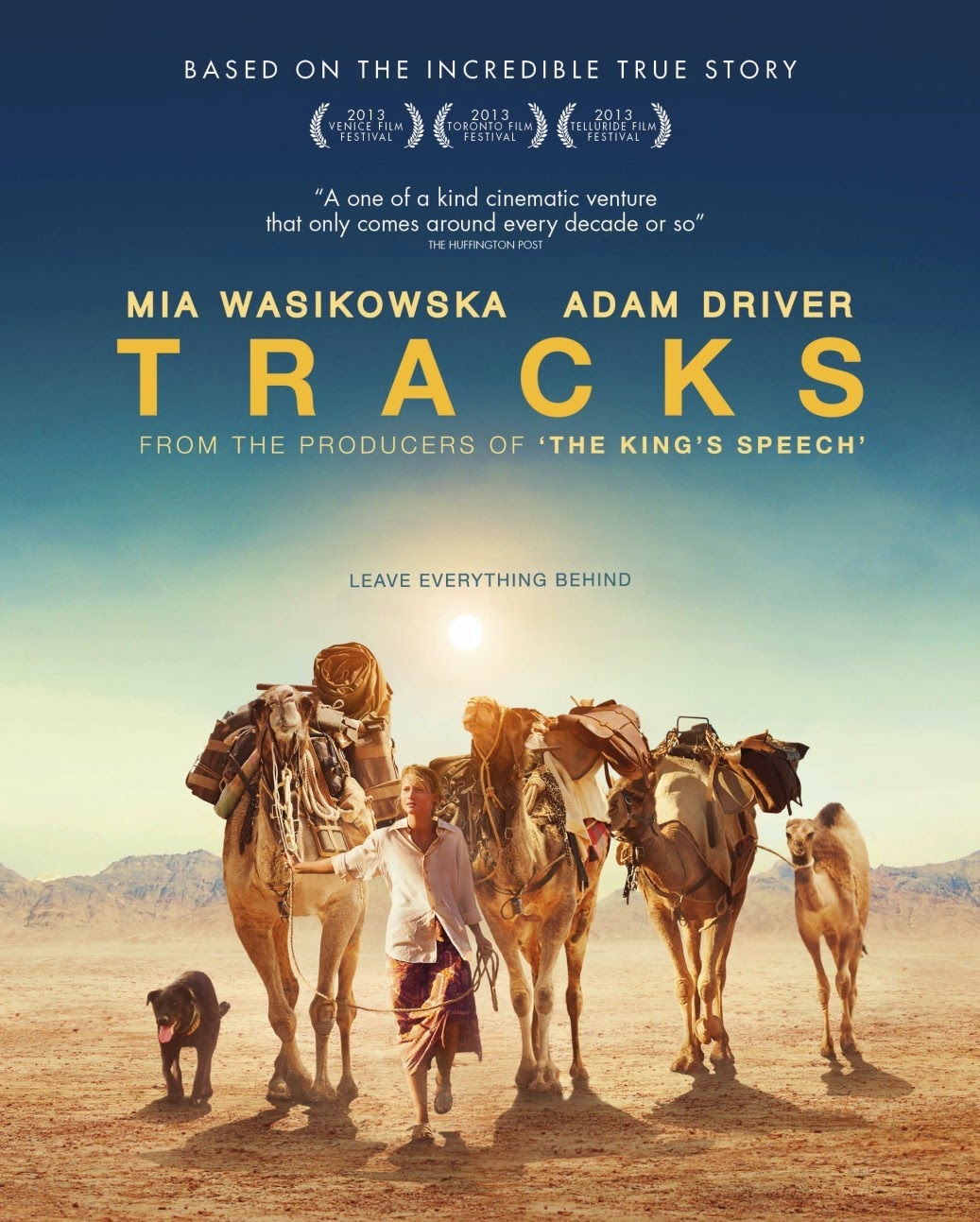 In 1976, 27 year old Robyn Davidson – an adventurer -- arrived in Alice Springs and set about to start her trek of 1,700 miles across the harsh Australian desert. Davidson was accompanied by four camels and a black Labrador. She wrote about her remarkable journey in National Geographic in 1977 (Robyn was 27 years old), and because of overwhelming response, she later expanded it into a best-selling book (released in 1980). Director John Curran’s “Tracks” (2013) is based on this Davidson book, and retells the astonishing nine-month walk of the restless young woman. The film is visually majestic and also captures the heart of an atypical explorer.

“Tracks” was planned in the early 90’s with Julia Roberts in the central role. But, the project never came together as various directors and producers came and went. However, the two decade prolonged development stage of the project has together a creative team, capable of capturing Australia’s national psyche. The film starts with 27 year old Robyn (Mia Wasikwoska) arriving in Alice Springs in 1976. Her attempt to co-exist with the local community goes futile, as she encounters racism and sexism day-to-day. After few more disappointments, she joins in a camel farm, where the genial, seasoned herder teaches Robyn the arts of camel wrangling and breaking. Friends and family members are less supportive about her endeavor. 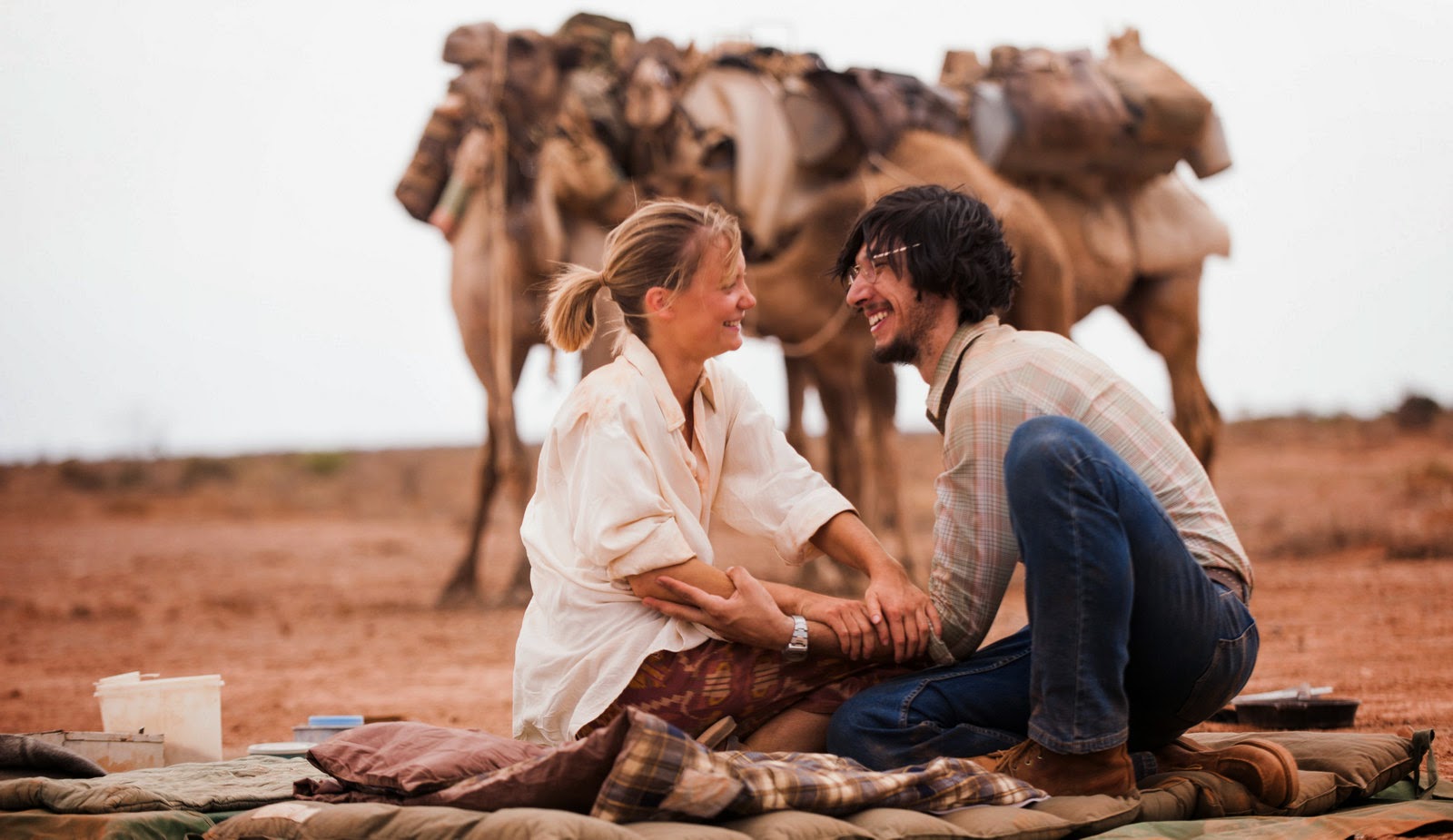 Robyn hates the company of others, but bears or tries to bear the company of American photographer Rick Smolan (Adam Driver), who secures funding from National Geographic, for the arduous 1700 mile trip. In 1977, she gathers the four camels and the dog, Diggity, and after saying goodbyes to sister and dad, Robyn sets out on the harsh terrain. Her quest for solitude is little interrupted by Rick, who according to The National Geographic deal would meet Robyn at a series of pre-arranged points on the journey. She clearly hates Rick’s intrusions and runs away from anyone who calls her “camel lady”, as Robyn itself confesses that nice people confound her, and she finds it easier to deal with pigs. Although Robyn finds humans as an inconvenience, she develops an uncomplicated friendship with an Aboriginal elder, Mr. Eddy (Rolley Mintuma), who guides Robyn through Aborigines’ sacred sites.

Wasikowska continues her impressive choice of roles as she once again breaks away from playing sullen teenager, and gives a multi-faceted performance. The central character would have only come across as a spoilt teenager, if it was played by any other unreserved actress. Although the landscapes and camera work (supremely captured by Mandy Walker) are haunting, it does tend to get a little repetitive and dull. Adam Driver’s presence in those dull phases infuses life. His neurotic, good-natured line deliveries don’t turn the journey into a tedious exercise. The way Robyn treats Rick is also something you rarely encounter in films (since gender norms for this sort of onscreen relationship is absolutely reversed). The four camels --Dookie, Bubs, Zelly and Goliath (actually 19 camels were used during production) – and the dog’s screen presence must be specially mentioned, since their stoic gazes are thoroughly captivating.

Director Curran didn’t reduce Robyn’s stubborn refusal of male assistance, within a strictly feminist reading. Female empowerment might be one of Davidson’s quests, as the reasons for the journey, till the end, remains as a mystery. It could be matter of therapy, as flashbacks perpetually reveals about the trauma, she experienced after her mother’s death. She might be exhausted by the human company or maybe she’s just an obstinate being. Although, “Tracks” pales in comparison with Nicolas Roeg’s classic, “Walkabout” (1971) and Peter Weir’s “Picnic At Hanging Rock” (1975), it certainly embodies some of those movies’ spiritual aura and surrealistic evocation. 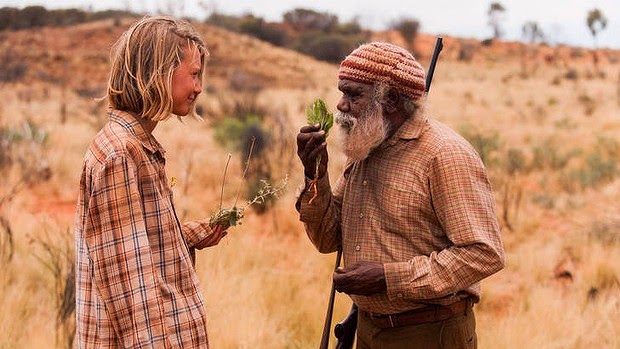 The lack of tension in the proceedings might irk the mainstream cinema viewers, but Davidson must be appreciated for maintaining the understated nature. He never exaggerates the troubles faced by Robyn and the relatively scant dialogues give a deeply immersive meditative experience. Cinematographer Mandy Walker was said to be chosen by Curran after seeing her stupendous outback location shots in Baz Luhrmann’s “Australia”. The dusty orange palettes bring aridness to the viewer. All the aerial shots are graceful. One of my favorite aerial shot happens when Robyn and her camels enter the white sand, leaving foot prints that resembles ink blots.

The pace of “Tracks” (110 minutes) might put some people off; nevertheless, it’s a well-acted, captivating travel movie about self-discovery and unrelenting nature.

Tracks -- IMDb
at July 05, 2014
Email ThisBlogThis!Share to TwitterShare to FacebookShare to Pinterest
Labels: Based on True Story, Films from 'Down Under', Road Movie

My wanderlust is fading, now I need a dose of this film