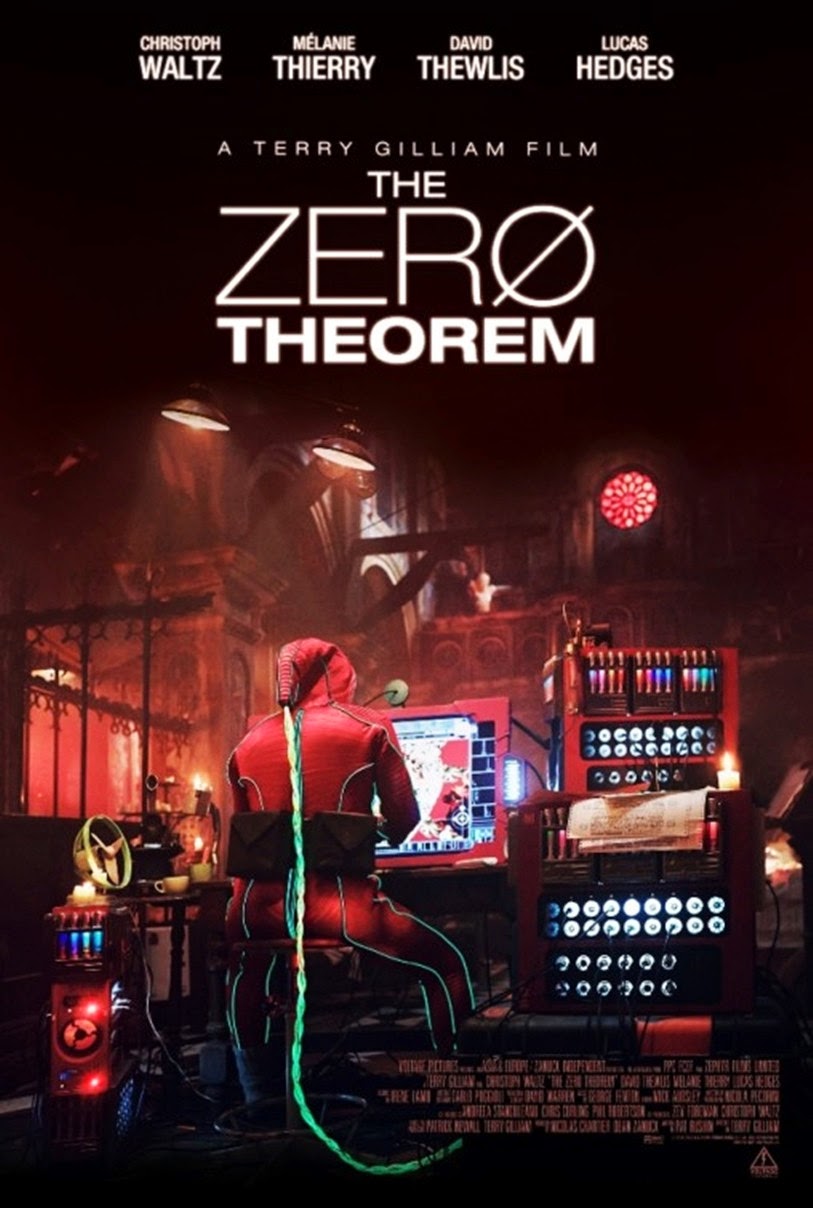 For the past two decades, wackily imaginative film-maker Terry Gilliam is going through a tough phase. His famous dream project “The Man who Killed Do Quixote” ran into several tribulations and from then on never made it to a green light. Gilliam’s movies, after the start of the 21st century, became increasingly muddled and at times unwatchable (“Brothers Grimm”, “Tideland” and “The Imaginarium of Doctor Parnassus”). Although these movies had a great cast, it eventually became a tedious exercise. Fortunately, Gilliam’s latest “The Zero Theorem” (2013) instills some faith as it possesses some of his stylistic hallmarks. “Zero Theorem” is definitely not a superior return to form as the ideas remain half-cooked, but this mid-level return to form is admirably ambitious and quite enjoyable.

The movie is set in the distant, tech-obsessed future similar to Gilliam’s “Brazil” and “Twelve Monkeys”. It starts with a very bald naked man, sitting in his home – an abandoned church – in front of console, crunching entities and eagerly waiting for a phone call. The bald naked man is Qohen Leth (Christoph Waltz), a depressed number-cruncher. Qohen has lost the ability to taste, feel and hates to go outside for work. Qohen works for a vast corporation named ‘ManCorp’ He repeatedly asks his supervisor Joby (David Thewlis) to allow him to work at home. Qohen also believes that the phone call will explain the meaning of his distressing existence. 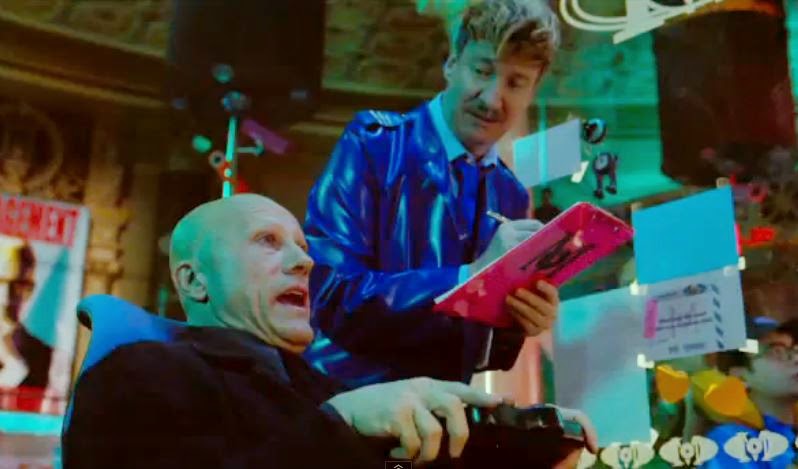 Qohen is eventually allowed to work at home, but in exchange, his boss Mr. Management (Matt Damon) challenges him to solve a complicated, mysterious equation called ‘Zero Theorem.’ Many others have gone crazy by trying to prove this theorem. After working for a year, Qohen finds it hard to prove the theorem and comes close to become insane. But, he is redeemed by a charming, seductive employee Bainsley (Melanie Thierry). She pops around and persuades him to wear a virtual reality suit to join with her in an erotic online encounter. The boss sends his quirky teenage son Bob (Lucas Hedges) to help Qohen to get back on schedule. 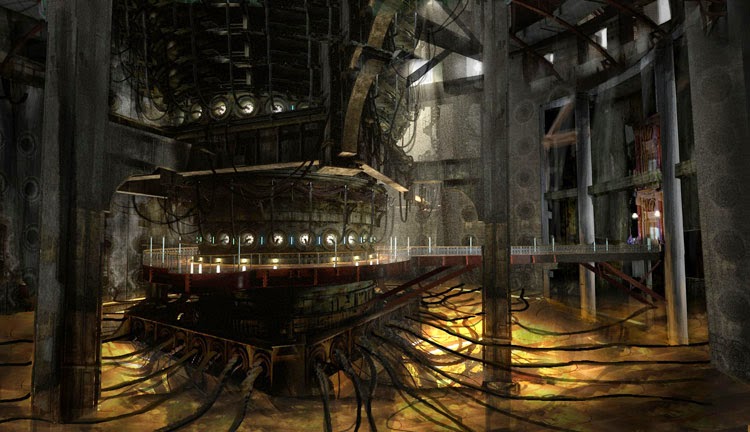 Director Gilliam, as always, takes the contemporary technological absurdities to construct a excitingly ridiculous yet horrific future. The high-decibel talking street signs; the candy colored streets littered with weirdly dressed people; the slot-machine like work station; people listening to iPad-like device in a party; a virtual reality sex site – all these visions, although doesn’t possess the brilliance of “Brazil”, it has some ragged charm. All the initial eccentricities don’t help the viewer to settle fully into the film. However, when Qohen retreats into his church/home, things settle down and themes about religion, love and free will are delicately laid. The majority of the film had to be filmed in a set because of budgetary reasons, which eventually has worked in favor of Gilliam.


“Zero Theorem” mostly deals with fear of death and humans’ nihilistic attitude. Although, Gilliam haven’t expanded on his wonderful ideas (especially the ending was very abrupt), he has boiled down basic philosophical questions about human existence into relatable series of sequences. Christoph Waltz as Qohen exhibits the mannerisms of a bullied kid – always expecting a beating. He transforms from being a madman to a warm person, who even stops referring himself in third person. The supporting is equally strong, especially Hedges, who provides quite a relief from the clogged ideas. 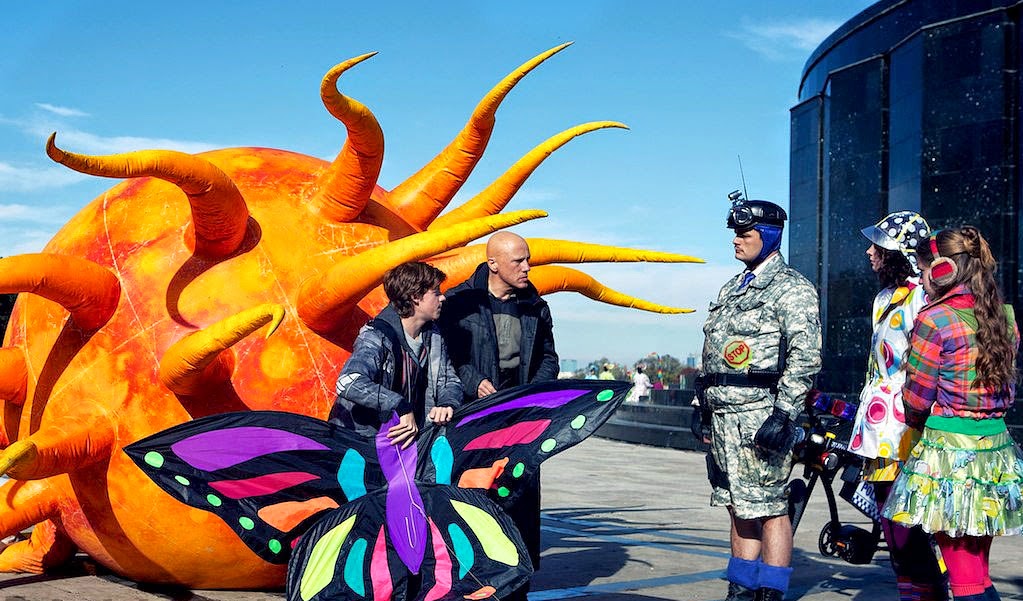 “The Zero Theorem” (105 minutes) is not a robust return to form for Terry Gilliam, but it is his most stylistic and layered film in the last two decades. His dark dystopian vision manages to express something powerful and thought-provoking.

Interesting collection of movies. I love watching bizarre stuff too, makes me wonder about the crazy creators behind it and how much faith one would have to involve others in his imagination and conclude it

@ Neha, thanks for the comment. None of the great on-screen performer could match a difficult creative director, in terms of eccentricity and sheer craziness