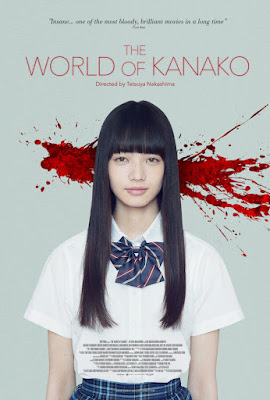 Japanese film-maker Tetsuya Nakashima’s films are laced with hyper-stylized aesthetics and intense editing to give us some kind of visceral punch, even when we can’t fully fathom the events unfolding on-screen. His previous films “Kamikaze Girls” (2004) and “Memories of Mastsuko” (2006) concocted drastic and crazy developments in the narrative, although our empathy for the central characters never wavered. With “Confession” (the director’s best film), Nakashima’s exuberance & vigor was channeled into a more refined, slow-burning narrative. However, in “The World of Kanako” (2014), the Japanese director once again takes the pedal-to-metal narrative approach and amplifies his pulpy sensibilities to give us an atypical revenge drama. Hysteric cuts, extreme violence and nihilistic attitude could be encountered at every turn and so once can’t tolerate the film, if they are averted by any one of those elements.

The protagonist in “The World of Kanako” Akikazu (Koji Yakusho) reminds us of Harvey Keitel’s “Bad Lieutenant” character, who bludgeons and growls at anybody on his path. He is an ex-detective, whose mind is driven by alcohol and drugs. Akikazu’s wife (Asuka Kurosawa) has divorced him after beating her secret lover to pulp. The film starts with gruesome murders of three youngsters in a supermarket and the man who reported the murders was Akikazu. Considering the former detective’s putrefied mind, he is also considered as a suspect. Later, Akikazu’s ex-wife calls him in despair, telling about the disappearance of their teenage daughter Kanako (Nana Komatsu). Akikazu doesn’t even remember how his daughter’s face and have no good memories about her. We also know that his humanity has been totally compromised, but still the old detective instinct drives him like a rabid dog to go search for Kanako. Akikazu’s quest takes us through rancid criminal underworld, but what we really learn is what an empty-shelled, monstrous pair, the father and daughter could be. 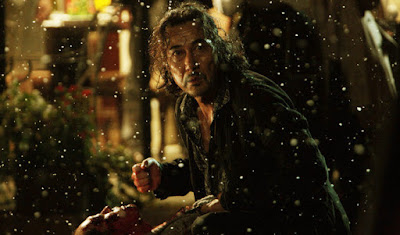 In an interview, director Nakashima states “the human feelings of hate and love are not always so far apart”. That statement is often reflected through Nakashima’s characters. The buried emotion of love makes his characters to act in different hateful ways. “Confessions” sharply explored how the rejection of love leads to unbridled hate and how love could drive us to do despicable things. In “Kanako”, the words ‘love’ and ‘kill’ are repeatedly juxtaposed to showcase the cycle of love and hate. Like fellow Japanese film-maker Sion Sono, Nakashima often offers an acidic take on moral decaying of modern Japan. The narrative delves into the emotionless nature of an older generation alongside the progressive sociopath tendencies of younger generation. In “Kamikaze Girls”, Momoko recites “Humans are born alone, live alone and die alone”, a statement from a 17 year old girl who never had a meaningful human interaction in her life. In “Memories of Matsuko”, the protagonist remembers how as a little girl she would make ‘funny face’, since that is the only thing that made her emotionally rigid father to smile. Matsuko makes the same ‘funny face’ as an adult to her scum of a boyfriend and gets beatings. 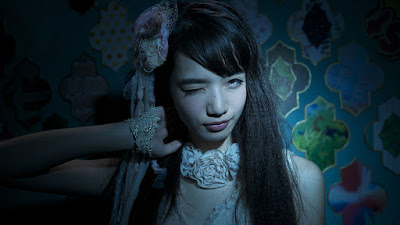 In “Kanako” too, there are recurrent references to emotionless parents, placed at both ends of socioeconomic spectrum. Akikazu comes across a dirty, drug addict mother, who don’t know her son’s whereabouts and he also encounters a wealthy hit-man, who doesn’t care a bit about the wailing of his little boy. This casual parental negligence itself is exhibited as some sort of drug, plaguing the contemporary Japanese society. Narrative wise, “Kanako” seems like re-shuffling of the events written in “Confessions”. Revenge, bullying, dangerously manipulative teenager, innocent angst-ridden boy and over caring mother are few of the strands that may thematically connect both these films. But, unlike “Confession”, “Kanako” is less restrained in terms of story telling and hyper-stylized in terms of visuals. The aggressive editing and time jumps in Nakashima’s previous film helped to add a profound depth to the characters, whereas in this film the motley imagery makes the characters a bit ludicrous. The story of bullied boy (played by Hiroya Shimizu) takes up a large chunk of the plot to gradually reveal us the duality of Kanako, but the boy’s character is written in a way that never makes us empathize with his plight. 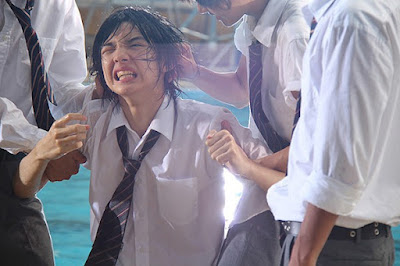 Nevertheless, the biggest flaw that keeps away “Kanako” from reaching the greatness of “Confessions” is the wantonly nihilistic attitude. The portrayal of criminal underworld verges on exploitation and the unrelenting violence in those sequences numbs our sense to a point, where the inherent social commentary is obliterated. We could certainly understand the Nakashima’s visual nods to Seijun Suzuki’s “Branded to Kill” & “Tokyo Drifter”, but the cheerful sense of moral abandon, prevalent in the scene, shies away from adding any depth to the proceedings. The existential musings and post-modernist approach of Nakashima would have been benefited more by a Lynchian approach. The absence of law officials could be understood as the director’s way of intensifying the moral decay nature of the society, but the snickering, lolly-pop chewing detective embodies the cartoonish characteristics which makes the societal remarks little blunt or pointless. Still, if the movies don’t go totally off rails, it is due to wild performance of Yakusho. He plays the ultimate bastard character who exhibits a vulnerability and sadness, even when his misogyny and disaffection goes into unnerving territory. Komatsu as the sociopath teen offers a grounded performance, although everything around her is so over-the-top.

“The World of Kanako” (118 minutes) relentlessly assaults viewer’s psyche to offer a meaningful as well as dizzying movie experience. It is the kind of distressing film that declares oblivion as human’s only fate.

The World of Kanako aka Kawaki -- IMDb
at February 07, 2016
Email ThisBlogThis!Share to TwitterShare to FacebookShare to Pinterest
Labels: Hard-Hitting Movies, Japanese Cinema, Thriller