A Passionate Kiss and a Stomped Face 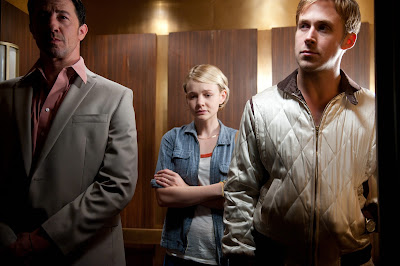 
The first time I saw Nicolas Winding Refn’s “Drive” (2011), it made me search for praise-worthy words: Elegiac existential, enigmatic, violent, meditative, sensual, tacit, subtle, artistic action. But, still “Drive” isn’t the kind of film whose mood couldn’t be inferred by a few set of adjectives. The neo-noir plot of the film is very familiar. The ‘Driver’ protagonist (played by Ryan Gosling) has no name, and although the narrative has a grounded realism, the ‘Driver’ pretty much comes off as a mythological character, who operates alone, with a set of rules. Despite his emotional blank state, the ‘Driver’ finds some solace in meeting beautiful apartment neighbor Irene (Carey Mulligan) and her little son Benicio. Irene’s husband Standard Gabriel (Oscar Isaac) is in prison and once he gets out, the little poetic phase of Driver’s life gets eroded and he transforms to be the person, he was meant to be.

There’s a long list of inspirations in the design of ‘Driver’ character. Alain Delon’s Jef Costello in Jean-Pierre Melville’s “Le Samourai” (1967) and Ryan O’Neal’s titular character in Walter Hill’s “The Driver” (1978) are the two significant characters that comes to my mind (Refn had also compared the protagonist with “Shane” and characters played by John Wayne). There are also tributes to the visual style of Martin Scorsese and Michael Mann (especially “Thief”). But, still Nicolas Winding Refn’s highly-stylized images don’t come across as a sloppy pastiche of homages. It fills us with the fascination of having experienced a real evocative art. And, every movie would have a scene where its themes are perfectly etched out; a scene which works as the heart of a movie; a scene that keeps on playing in our mind, long after we have witnessed it. Director Refn infuses such excellence in “Drive’s” romantic as well as most violent ‘elevator’ sequence.

Refn is fascinated by character transformations. His 2008 film “Bronson’s” -- about Britain’s most violent prisoner -- central theme revolved around a  psychotic individual, transforming to what he was meant to be. Similarly, in the elevator scene in ‘Drive’, the driver makes the full transition from one mode to another. The Driver often wears a scorpion jacket, which very much denotes his persona – loner & protector. Gosling’s driver protects the innocents to exorcise his own inner demons. He is ready to sacrifice himself for all the goodness of love. The warm color tones while he drives Irene and her son in the first half is gradually replaced by him driving lonely in the darker world like a nocturnal being. And, these accumulated darkness in the second-half of film, culminates inside the elevator, bringing out the driver’s purely psychotic behavior.

The elevator in ‘Drive’ could be seen as a bridge that connects his outer world persona with that of his personal space, which in the narrative time was filled with innocence and love. The sequence begins in the apartment hallway, where driver tells Irene about the heist-gone-wrong. He also tells about his thought of running away with Irene and her son, taking up the money from heist. She slaps him and the driver stands looking down. A faint squeak of an elevator door opening is heard. It fills us with sense of looking through a confined world where things tend to change. A third person is inside the elevator, standing with a reluctant pose. Irene enters and driver follows her into the elevator. Two low-angle shot sets the scene inside the elevator to convey the feeling that the two men are looking at each other closely. Then Refn, slowly cuts to show us a gun stashed inside the third guy’s (who is obviously is a hit man) suit jacket (this could be taken as POV shot). 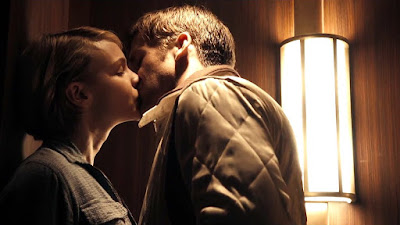 As the driver learns of this man’s intention, we once again see a brief  low-angle shot, where for few seconds the driver contemplates on his next move. And then comes out the beautiful side-on view of the elevator, where driver and Irene are behind the hit-man. Lighting changes, music changes and sequence attains a slow motion, indicating of a change in atmosphere. Its like ‘the driver’ and ‘Irene’ are enshrouded in a separate world from that of hit-man. Driver gracefully pushes Irene into the corner and slowly leans into kiss her. The lights in elevator dims as the driver passionately kisses her for quite a while. This lingering kiss seems to have stopped the time. This private romantic moment tells us that the driver is about to cross a line from which he won’t be able to return. As they slowly pull away from each other, music fades out and lights become bright. Suddenly, the slow motion transforms to normal frame rate and the driver jumps into action. Irene backs away into one corner of the elevator as he slams the hit-man’s head into the elevator walls. The shared intimacy (kiss of goodbye), within a blink of an eye, transforms to violent clash, which further enters into the gruesome territory as we see the hit-man being pushed into the ground. 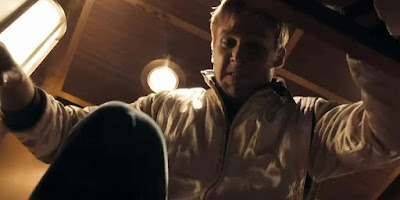 A mid-shot of ‘driver’ shows him stomping on hit-man’s head. Once, twice, thrice and the stomping continues as terrified Irene cowers in the background. By the 12th stomp, the bones in hit-man’s face start to break and by the end of 17th stomping and after 15 seconds (source: “The Sounds of Violence” from slate.com), we hear squishy sound as blood splatters across the frame. The elevator door slides open at that point, and horrified Irene flees into the garage. What follows up is a mid-shot of driver from behind as he gradually turns to face Irene and a medium long-shot of Irene standing at the center of frame, hard to believe that the guys’ effort to save the loved ones would make him to do such a thing. Nevertheless, there is not a single dialogue uttered in this scene (the sequence lasts for nearly three minutes), and it finally cuts to scorpion jacket of ‘Driver’. The heavy breathing of driver makes the ‘scorpion’ look like a convulsing living being, and yeah, the ‘scorpion lives’ transforming him to reach his fate.

This stupendous elevator was originally planned to take place in the garage. Irene and driver would go to the parking lot and the hit-man would come to shoot at her. And, the driver would push her into safety. It was unbelievably conventional and Refn says that it was his editor Matt Newman, who suggested for a change of location (a week before the shooting). The editor also pointed out the elevator shoot-out scene in Takeshi Kitano film (end shootout sequence in “Hana-bi”). Director Refn was then taken up with the idea of showcasing ultimate love and ultra-violence, both paced like visual poetry. The switch-over to violence represents the driver’s necessity to embrace the darker side to protect Irene.So, the change from lover to psychotic or the kiss to violent stomping never comes across unrealistic. The build-up to the ‘elevator’ scene was impeccable and so the pay-off has an emotionally engaging and disturbing effect on us.

When Refn was asked why the violence and excess of it in his film is so pointed, he replied “I guess art is an act of violence, in a way. It's an emotional outpouring, and I don't really know ... I think that violence in the cinema is necessarily a fetish. Emotionally, our artistic expression consists of sex or violence. It all boils down to those two pure emotions that we have. But where erotica or sexuality is not fantasy, because most of us do it, violence, on the other hand, is fetish, is fantasy. There is sexuality to violence that I find very intoxicating. But I think that that's what turns me on.”

The Sound of Violence -- Slate

at February 17, 2016
Email ThisBlogThis!Share to TwitterShare to FacebookShare to Pinterest
Labels: Movie Essay