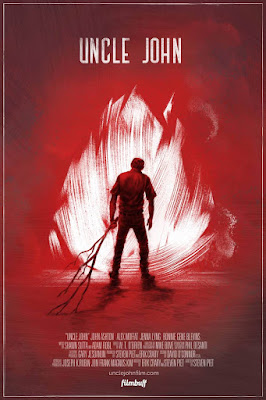 First time film-maker Steven Piet’s low-key American indie thriller “Uncle John” (2015) opens with a murder. The murderer seems like an older gentleman, who after the act of murdering painstakingly builds up a bonfire, throws the corpse into the flames and later buries the ashes. The dead man is named Dutch, a religious zealot, who might have had something to confess to old man John (John Ashton) about John’s long-dead sister Dede. Although John is up to no good when we first see him, he seems like an affable small town guy as we see him chatting up with other senior-citizen pals in a diner. He is a carpenter and owns a decent-sized property amidst the farmlands of Illinois. So, the question remains is ‘why?’, but writers Piet and Erik Cary aren’t interested in accommodating their plot into a ‘thriller’ label. The writing is so nuanced here that it includes another parallel narrative, which organically meets up with ‘Uncle John’s’ afflictions at one point.

The parallel story involves John’s nephew Ben (Alex Moffat), who is in Chicago (few hours away from John’s place) working as a designer of TV commercials for a small company. The first question viewers might have after witnessing Ben’s simple lifestyle is that ‘what’s it have to do with the creepy and painful run-ins of John?’ Yeah, the two stories seem totally unrelated, especially when a New York girl Kate (Jenna Lyng) joins the company at the managerial level. The first thing Ben does after looking at beautiful Kate is checking her Facebook account, which offers snippets of her life that is entirely pleasant. The nature of their working gradually brings them closer, but both don’t act on their feelings, keeping up the friendly working relationship. Back in the small town, Dutch’s baleful younger brother Danny (Ronnie Gene Blevins) is stalking John to learn the reason behind his brother’s disappearance. Of course, Ben & Kate meets John in a tensed situation, but everything here is so naturalistic and understated that our attention doesn’t often wavers to think about the word ‘predictability’. 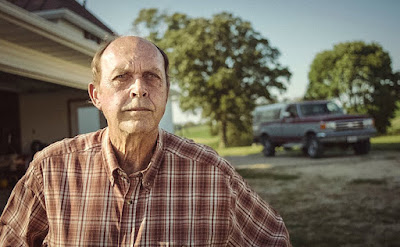 The plot or sequence descriptions of “Uncle John” couldn’t really convey the uneasy feelings plus the tangible emotions generated by the narrative. Even though nothing overly dramatic happens in John’s story-line, a tensed vibe is maintained throughout which reminds us of Coen brothers’ movies (for eg., “No Country for Old Men”). Of course, one can’t compare the mastery of Coen brothers to that of the visuals we see in “Uncle John”. But, still this indie seems like a fitting nod to their moody works. Steven Piet’s movie is never about the destination point. There is no point A or a point B, and so viewers expecting a edge-of-the-seat narrative with a simple explanation in the epilogue would be grossly disappointed. “Uncle John” is more about observing the lives of two polarizing figures who share a common past. Ben and Kate’s past are vaguely outlined, but their restrained emotions and lighter compliments make us root for them. The romantic track doesn’t have the usual sugar-coated feature. Yet, the presence of this romance could have served as risky to the narrative because the lack of dexterity in writing those scenes could have certainly ruined John’s story-line too. There are minor flaws in the love story, diffused with many filler shots, but the quality of direction and acting makes us to overlook those.

Despite the superbly written naturalistic small talks between characters, the script wouldn’t have generated the enough impact, if not for director Piet subtle staging of each sequence. Be it the gossiping talk in the diner or the languid conversation between Ben & Kate, Piet’s frames pleasantly lingers on to catch the characters’ reactions or even their silences. Again, for those seeking a thriller, these are the moments that may infuse boredom, but for me this minimalism gave an immersive experience. From an aesthetic viewpoint, “Uncle John” might be compared with recent acclaimed indie flicks like “Blue Ruin” or “Shotgun Stories”. And, there’s certain similarities with those small town indie noirs, but the way Mr. Piet draws out the delicate aspects of the on-screen characters to make “Uncle John” very much its own movie.

The central theme of the movie deals with an age-old, universal saying of ‘how people aren’t exactly what they seem’. The whole religious lecture at the start, recited by Dutch, impeccably sets up the events of the plot. I haven’t fully understood the deep religious context prevalent in the script, but the capacity of violence within John (who is seen by his neighbors as a guy who wouldn’t even hurt a fly) indicates the evil that lurks with in all of us mortal men. The lack of epiphany in John’s heart as he strangles the man with gas can appeared like a discourse. One of my favorite sequences in the film comes toward the ending, when Piet beautifully juxtaposes or inter-cuts love-making with an act of murder.  John Ashton as the uncle certainly adds a lot to the film’s moody tone. From “Beverly Hills”, “Midnight Run” to “Gone Baby Gone” often plays minor characters as notorious law officers. But, here as John, he imbues enough ambiguity to make us care for him as well as to wonder what infamous thing he is going to do next. Alex Moffat and Jenna Lyng casual flirtations are magnetic and engaging. It is not easy to capture in words, the subtle liveliness these two bring to their respective characters. Special mention must go to the excellent, minimalist eerie score by composers Adam Robl and Shawn Sutta.

“Uncle John” (113 minutes) is a simple, realistic moody thriller which may entrance those looking for something different and nuanced.