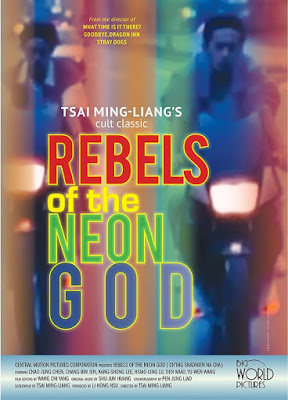 Taiwanese auteur Tsai Ming-liang has told the story of one man, Hsiao-Kang (always played to perfection by Lee Kang-sheng) in his ten feature films. Deteriorating urban settings is his recurring cinematic landscape, while his characters remain silent & dislocated and seemed to have been relegated to fringes of society or fallen through the cracks of it. Tsai’s works (or the so-called narrative) contemplates upon the same themes like urban isolation, failure to communicate and failure to realize sexual desires. Tsai’s visual staple often includes water: heavily pours in the form of rain or trickles, splashes and gurgles through filthy sewers and flooded floors. Few minutes into his movie, you can clearly understand that Tsai isn’t so intent on telling a story. He is so fascinated in showcasing his lonesome characters’ small life experiences and sensations that we are often left to watch the silent souls perform their routine activities like eating, smoking, bathing, gazing, etc. And all the episodically visualized, unique work started back with his feature-film debut “Rebels of the Neon God” (“Qing shao nian nuo zha”, 1992). ‘Rebels…..’ is Tsai’s easily accessible film because there’s a semblance of a narrative and lot of camera movements. It’s also my opinion that the auteur’s work can be perfectly savored by watching life of Hsiao-Kang in chronological order – starting with ‘Rebels……’ (however, it is not necessary since his works also operates as stand-alone features).

New York Times Critic A.O. Scott stated that “Rebels of the Neon God marks the start of one of the modern cinema’s great careers”. He couldn’t have been more right. Tsai’s study of Taipei teenagers snaking through arcade games, roller skate rinks, night markets, seedy motels and tutorial centers works as an impeccable rebuttal statement to romanticized coming-of-age movies, where pop-culture influences are often evoked to pay homages. In the debut-feature, Tsai deconstructs the references of pop-culture with a remarkable clarity that all the youthful proclivities seem to be the end result of perpetual isolation in urban landscapes. Tsai’s vision, of course, isn’t limited to youth; he also explores the soul-sucking side of globalization; futile future plans of older generation and their emotional confusion; and the universal frustration of not getting acknowledged (this themes is very much relevant now, because don’t we sometimes become crazy over few ‘likes’ and ‘unanswered messages’?). 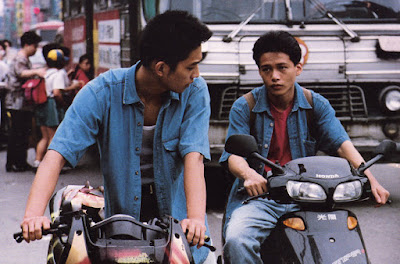 The film opens with an image that seems to tell a lot about arduous city life. A pair of youngsters gets into phone booth to escape from the torrential downpour. But these guys are not fleeing from the deluge of desolated life; they are also surviving by breaking into the payphone to get loose changes. The troubled youths are Ah-Tze (Chen Chao-jung) and Ah-Bing (Jen Chang-bin), who seems to have no other interest beyond committing petty crimes and playing arcade games. They also try to be iconic cool guy by riding in macho motorbikes. When we first see Hsiao-Kang (Lee Kang-sheng) he stabs a cockroach with his compass point and then throws it out of his window. Alas, the cockroach seems to have surfaced on the other side of his glass window pane. Now, he tries to swat the cockroach and hits it so hard that the glass pane breaks, injuring his arm. He goes to bathroom to wash off the blood from his hands and mother asks Hsiao-Kang “Do you have nothing better to do with yourself?” These simple sequences might seem insignificant, but it pretty much points out the characters’ nature and the path they are going to traverse through. 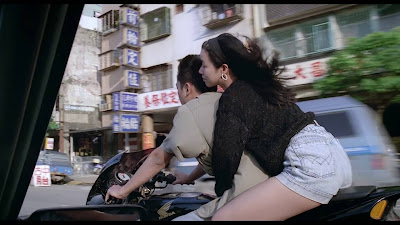 Hsiao-Kang is a very silent student, enrolled for a course at a tutorial school and drives a small scooter. His working class parents (father, a taxi driver) are so bothered by their son’s minimal social skills and lack of ambition. Mother visits a local priestess, who has told that Hsiao-Kang might be reincarnation of legendary god Norcha (the god who had troubled relationship with his father). Ah-Tze lives in a bedraggled apartment with his older brother (whose face we never see), where he often tries to plug up the leaking drain. He masturbates to the sound of his brother having sex with a girl named Ah-kuei (Wang Yu-wen). Soon, Ah-kuei joins the thieiving duo in their nighttime journey through malls, restaurants and arcade. While riding in the taxi with his father, Hsiao-Kang sees Ah-tze and Ah-kuei on the cool motorbike. For the young tutorial-course-studying guy, Ah-tze seems to be the cool, independent guy with a girlfriend. Later, at a traffic signal, due to minor altercation Ah-tze vandalizes the taxi of Hsiao Kang’s father. Now, the silent boy decides to become vengeful god 'Norcha' and wreak havoc upon the motorbike dude. Of course, this simple pursuit is delicately realized through neo-realistic grit and artistic panache. 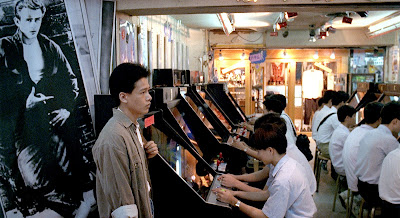 Film-maker Tsai pays homage to Nicolas Ray’s classic teenager movie “Rebel without a Cause” (Hsiao-Kang looks at James Deen poster hanging at video arcade store), but “Rebels of Neon God” is something more than a genre piece. He subtly showcases the contrasts between two youths, although he isn’t so intent on making both his characters sympathetic. The motivation behind Hsiao-kang’s unnerving aggression is never clearly explained (does he feel jealous over Ah-kuei?) nor the shaky familial background or the socioeconomic condition of Ah-tze. As Tsai tells in an interview: “I am not passionate about ‘storytelling’. I approach movies more in the prosaic, poetic way”. And, there’s a lot of poetry and profound metaphors beneath what looks like a simple despair of youths. All of the standout moments in Tsai’s works are visual. A cigarette butt, beer can and a sandal float in the leaked drain, inside Ah-tze’s apartment’, and gradually the water recede, leaving those objects at the same space. I can’t exactly figure out the liquid metaphor here, but it appears to symbolize the daily lives of those three youngsters, filled with pop-culture excesses. Another excellent visual moment happens when Ah-tze kisses Ah-kuei in an unrefined manner at the sleazy motel sofa. On the TV next to them, a woman artfully embraces a man in a commercial, which acutely broods upon the contrast between romanticized and real images. If at times the film-makers’ characters tend to speak up their thoughts, it may be to realize (unusual) sexual thoughts (Ah-ping asks Ah-tze to seat Ak-kuei between them at the movie screening to ‘enjoy smelling her’) or pleasures. 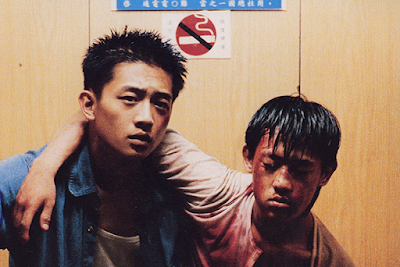 The ‘no-cause’ journey of the movie’s rebels is a bit different from Nicolas Ray’s 1955 classic. Although the film’s title may refer to Hsiao-kang mother’s belief in the reincarnated mythological god ‘Norcha’, the titular god is evoked through the glowing images of neon light arcades. Tsai makes us observe the pious worship of these neon figures by youngsters in public spaces. Those spaces become everyone’s springboard to unload fantasy-driven violence. Gradually, the emptiness perpetuated by the Western Culture’s digitized objects becomes the central point. The fantasy violence of the games is mixed with ancient beliefs in Hsiao-kang’s quest for revenge. As always, the inspired real action or the unreal, button-pressing games, both never fills the void haunting them. Take the scene, when Hsiao-kang hoots and dances at his hotel bed in underwear after fulfilling his revenge. He eventually hits his head, falls on the bed and slowly the sullen look returns. Tsai consistently employs long shots to see nothing romantic about the actions of Hsiao-kang or Ah-tze. Film-makers often tend to see masculinity and violence through a romanticized lens or depict its aftermath on others. But, in Tsai’s works, small acts of violence and showcase of masculinity hollows out the perpetrator as much as the victim. This adamant approach to characterization and visuals may slightly veer Tsai’s films towards parody or pomposity, although there’s enough naturalistic context and thoughtful aesthetics to nullify such tiny imperfections.

“Rebels of the Neon God” (102 minutes) is a subtle, profound and distanced observation of urban alienation, broken love and youthful malaise. The delicacy with which the modern cinematic master Tsai Ming-liang mounts his visuals demands a patient and contemplative mindset from cinephiles.

Rebels of the Neon God -- IMDb