Buzzard [2014] – A Subtle and Enthralling Study of a Reprobate 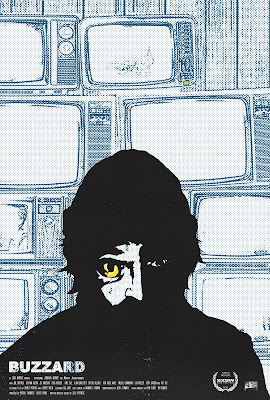 Joshua Burge plays the role of angry young slacker, Marty Jackitansky, in Indie film-maker Joel Potrykus’ second feature film “Buzzard” (2014). He is thought of as Polish but he’s White Russian. He is tall, skinny, has large eyes, soft mouth and sleek cheekbones. His emotional stillness is as cartoonishly handsome as Buster Keaton’s facial features. When we first meet Burge as Jackitansky, his emotionless face is in the middle of the frame, thinking that he is five steps ahead of people in the system. What Jackitansky does next is hilarious, although it doesn’t make us like him. Marty closes his $250 checking account at the bank, and immediately asks the staff to open a new checking account for the sole purpose of luring in $50 advantage the bank offers. Marty’s relative joyless existence is punctuated by such little scams, where the aim is to just show the middle finger to ‘The Man’. But, Marty isn’t a subtext-armored ‘Tyler Durden’ to be an intelligent scammer; he is just so caught up with his own sense of awesomeness that he is unaware of things reaching a nightmarish, threshold point.

“Buzzard” may delight some and disappoint a lot. Its minimalist depiction of middle-class, affixed to the middle part of America, or its unconventional take on slacker sub-genre might make a few to see it with a appreciative glance, but even them could be averted by the increasingly volatile down-ward spiral of Marty. It is funny, but not a comedy. It is about a paranoid, unethical young man, but this guy doesn’t provide rhetoric statements to make the viewers understand his actions. “Buzzard” is simply a character study about a man, who is hard to like, but also harder to dismiss. Despite all his embittered and intimidating looks, there is a vulnerability to Marty Jackitansky that kept me observing him, even when he crams up spaghetti & meatballs (food spilling onto a hotel bath-robe) or when he relentlessly unloads abuse on friend/co-worker Derek. 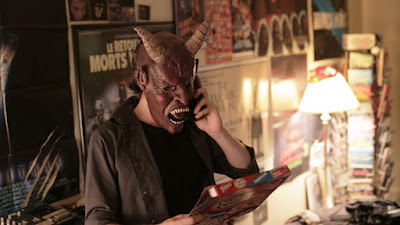 Marty is forced to be on the fringes of a cubicle culture. He is a permanent temp at Mortgage Company, earning $9.50 an hour. Unlike his work buddy Derek (Potrykus), Marty isn’t interested in waiting to be a permanent employee with full work benefits. He may know that such permanence is impossible in the crisis-ridden middle-class society of America. So, he takes three-hour breaks, doesn’t care about being the ‘employee of month’ and works to develop his small criminal enterprise. In the opening scene, he rips off $50 from his own mortgage firm and then we see Marty ordering up unnecessary office supplies, only to sell it back at the store for refunds. All these nickel-and-dime hustling by Marty isn’t also used in drinks or drugs. He is just maintaining his collection of comics and death-metal music. His drab room is decorated with horror or exploitation film posters (from “Wicker Man” to “Leviathan”) and he is prideful about his Nintendo-glove re-designed to be a Freddy Kreuger metal blade finger-tips. 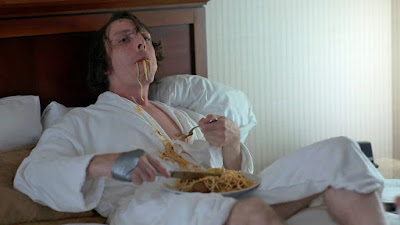 The straight-faced conviction and relentless pursuit of little scams by Jackitansky reminds us of Robert Bresson’s doomed con-man in “Pickpocket” (1959). We know what would happen, when the firm’s manager places a pile of undelivered checks on Marty’s desk. But, he is so joyous that he had figured out something so imaginative to cheat the intended recipients of returned tax refunds. The dubious scheme is quickly discovered, and a panicked Marty literally backs off to a basement (Derek’s dwelling, also known as ‘The Party Zone’). When he clumsily lies to his mother “I don’t ever act like that anymore. I’m happy now. Everyone likes me”, we can’t help but feel a little for him. Marty’s paranoia then makes him to run off to the bedraggled, economically distressed streets of Detroit.


Like the bird of prey in the movie’s title, the protagonist preys upon smaller beings, placed at societal rungs. Director Potrykus keeps his shots closer to Joshua’s face, when the scams are successful. Gradually, as Marty’s methods are found out or even when he himself is scammed upon, the frames take in the surroundings, indicating the threshold for humiliation. When Marty’s paranoia and nervousness upsurges the camera frames too get a little shakier and the cuts become more jarring and sudden. Portykus’ characterization of the protagonist could be deemed as morally empty or simply as sociopath, but I think that there’s enough hints to view Marty as a youngster trying to get by with little money. He uses promotional codes for phones; he has free coupons for ‘Hot Pockets’; he picks up egg-sandwiches from the trash can to swindle for a new one; after a real injury at home, he fakes one at office to gain worker’s compensation (since there are no health insurance for temps). These little moments works as a commentary about the society Marty lives in, where his hilariously pathetic scams and Travis Bickle like downfall seems to have a meaning. But, Potrykus never makes such moments didactic to serve the single purpose of socioeconomic criticism. 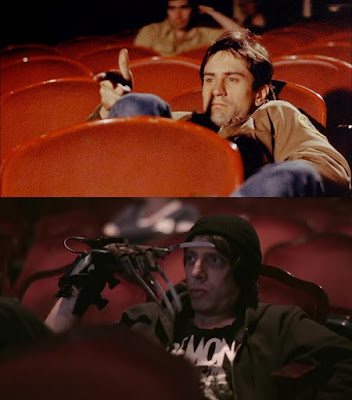 Joshua Burge imbues enough compassion into the odious characteristics of Marty to keep it engaging. We know that Marty’s self-destruction is inevitable and even pointless, but nothing comes off as false due to stoic performance of Joshua. As balding, ordinary, homo-phobic Derek, Potrykus steals all the scenes he is in. Derek’s failure to accomplish his dream of designing a ‘Party Zone’ looks both farcical as well as relatable. The most compelling sequences in “Buzzard” comes toward the ending, where ‘Chekhov’s gun’ principle is fulfilled and Marty runs with heavy metal music on head-phones (a shot-to-shot homage to Leos Carax’ “Mauvais sang” aka “Bad Blood” (1986); source: IMDb trivia page). The joy of escape could be seen, but the camera gradually fixes its gaze on Marty’s arms & legs, indicating that there isn’t going to be change, although the background rapidly changes in those moments. Eventually, he stands in front of a store’s video screen like a cornered prey. Did ‘reality’ catch-up with Marty in that final, contemplative frame? Or did his delusions transcend the stages of ‘reality’? Whatever it is, it was interesting and compelling to watch this guy .


“Buzzard” (97 minutes) is an atrocious and raw, yet bewitching character study of a dispirited slacker. The minimalist indie stagings plus the calm, introspective quality may not satisfy those expecting a funny, roller-coaster ride.