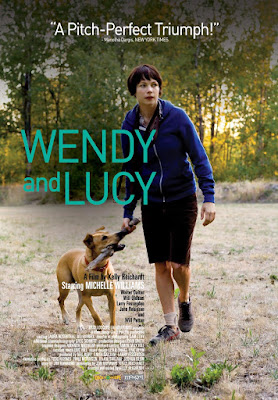 Vittorio De Sica, the leading figure of Italian Neorealist movement, in 1952 made one of his masterpiece feature-films “Umberto D”, which was about an old government pensioner, dwelling in a cheap room with his dog, in post-war impoverished Italy. The film impeccably focused on the everyday reality of a person hanging on the edges of a society that could be indifferent, cruel as well as humane. American indie film-maker Kelly Reichardt’s“Wendy and Lucy” (2008), adapted from Jonathan Raymond’s short story, seems like the descendant of that timeless movie. Although “Wendy and Lucy” couldn’t be classified as the most outstanding work like De Sica’s film, it perfectly works as a resonant, little mood piece which isn’t burdened with a plot.

If you are intent on watching movies based only on story line, then Reichardt’s film could be described like this: Wendy (Michelle Williams), a young drifter with her dog Lucy, sets out to Alaska in her car. En route in Oregon, the car breaks down and the dog gets lost, and so the young girl spends her time rooting out those problems. Some may guffaw at the plot and some may think that nothing much happens in the movie. But, I felt that “Wendy and Lucy” is one of the well-crafted indie films in recent times that crisply observe the reality of small cruelties and fleeting kindness. We could read in plenty of socioeconomic and political perspective from the film (it was especially made during financial destitute period of our generation), but the moving aspect here is the well grounded humane perspective. Humans’ basic need for love and connection is absolutely condensed into the narrative’s social commentaries and it is all done, without a single frame of manipulative melodrama. 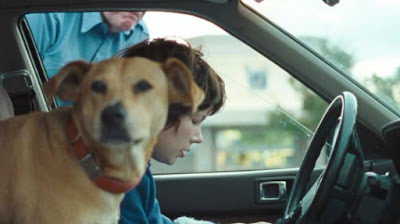 Director Kelly Reichardt first gained festival circuit attention for her 2006 low-key, camping trip movie “Old Joy” (although my favorite of Reichardt’s work is “Meek’s Cutoff” (2010), an enigmatic anti-western). Reichardt, with her minimal imagery always focuses on the little things, which gradually forms into bits to what we call as ‘life’. Rather than driving us towards a set of emotions, she is more content to let us find our own way through the nuanced characterizations. By stripping dramatic high-points from the plot, director Reichardt makes us to look beyond what’s happening on-screen and to relate with the sense of place and subsequent human interactions. The lack of striking emotional quality in the film may easily make us to categorize it as ‘art film’, which many would relate with words ‘boring’ and ‘slow-moving’. However, I took in all these little moments “Wendy and Lucy” and it all left me with a great emotional weight. I felt compassion, coldness and yearning without the director and writer blatantly trying to make me feel those emotions. 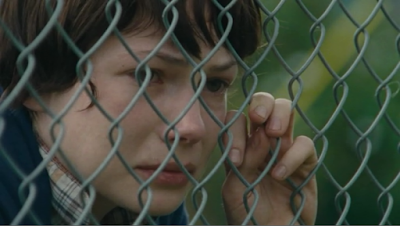 The defeat and desperation that came with the economic downturn is subtly ingrained in Reichadt’s visuals: can-collecting homeless; brain-sick wanderers; train-hopping exuberant youngsters; and marginally employed old men capture the range of suffering and humiliation. The frames are fixed and keenly take in small and telling details. The meticulously maintained expense notebook, fogged mirror of the rest-room, the smug store clerk picked up by his parents, the ‘all-is-business’ attitude of mechanic shop owner patiently indicates at the humanity or the lack of it, around Wendy. And, as in classic neo-realist tradition, “Wendy and Lucy” becomes rich in character and mood because of the central performance. The profound level of nuance, Michelle Williams exhibit may not have brought her any big awards, but the way she downplays the emotions of frustration and despair works more like a fascinating poem rather than being outwardly persuasive. She never asks for our pity; she isn’t the hard-minded, philosophical person like Christopher McCandless in “Into the Wild” (2007), but as Williams tip-toes around all of Wendy’s tribulations, she gains our empathy as well as respect. That doesn’t mean that Wendy is championed in this narrative. We also learn about her estrangement (with sister) and left to think about the foremost little flaw (which sets up the entire catastrophe).  The other genial, understated performance comes from Wally Dalton as the security guard.


“Wendy and Lucy” (80 minutes) is a beautiful, heart-breaking film that goes for profound emotions and conscientious details rather than taking the easy way of sentimentality. Wendy doesn’t do much, but what she goes through gave me an ultimately rewarding experience.