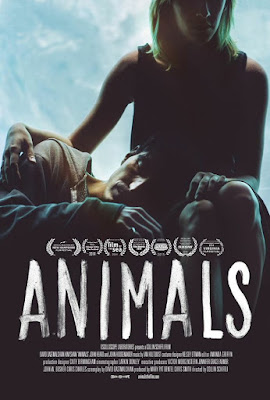 Director Colin Schiffli’s feature-film debut and actor David Dastmalchian first movie script “Animals” (2014) is a story of partnership in addiction. In the narrative, we often see caged animals living in a zoo, which draws parallels for the self-imposed cage, the film’s protagonists have brought on themselves due to their animalistic urges to stay ‘high’ on a daily basis. It is a bit flashy, not-so-subtle metaphor, but such metaphorical highlighting along with best central performances offer something unique, in what could be otherwise seen as a ‘commonplace’ narrative. “Animals” doesn’t possess the surrealistic, queasy tone of “Requiem of Dream” or a trenchant portrait as in “Christiane F”, but the authentic, perpetuating self-destruction of drug addicts are portrayed in a heartfelt manner. The other stronger aspect of the film is its limited narrative time frame and the limited running time.

When the movie opens, Jude (David Dastmalchian) and Bobbie (Kim Shaw) aren’t in the jovial phase of shooting-up together. They are already pushed into a beat-up sedan, their own island of pleasure. Jude and Bobbie’s routine have become cheerless, since they face day-to-day struggles to feed off the addiction ‘animal’ inside them. And, once the duo steps out of that pleasure island into the vast Chicago locale, all that remains is a vast ocean of uncertainty, where their needs could make them do anything. The couples steal music CDs, rip off suburban men looking for sexual favors and pull off few other con-artist schemes. At one circumstance, Jude muses “You know we were born in the best of circumstances”, but despite that statement, “Animals” for the most part isn’t the self-pitying, didactic drug addict movie. It neither glamorizes (imbuing hippiness) nor criminalizes the characters’ behavior; it rather hangs in the middle and simply observes as their world fall apart. 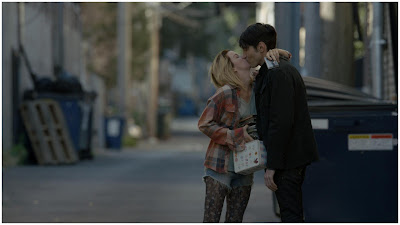 The dark, deep eyes plus a wary smile made David the perfect candidate to play minor bad guy roles in “The Dark Knight” & “Prisoners”, but as a scriptwriter he instills enough nuance and soul to his character Jude. The charming conversations with Bobbie and desperation due to addiction are well written and director Collin Schiffli has wonderfully captured those emotions with fluidity. The rawness when sticking the needles and the genuineness of couple’s love is what makes us care for the characters, although the plot on the outset looks so mundane. As viewers, we know these people have fallen despite their intelligence and fine upbringing; we ought to despise their confinement within the fringes of society. But, still Jude and Bobbie remain empathetic and vulnerable since at some level, we can relate to their tangible emotions.

The drug sessions are filmed in an explicit, hard-hitting way. However, the harassment, beatings, and relapsing phase in the film’s third act gives a ‘been-there, seen-that’ feeling. Those sequences don’t add any distinction to the addiction narrative, although the devotion with which David and Shaw plays their characters keeps us intrigued. It is the actors’ tenderness that transcends the scenario and avoids didactism to a point. The most poetic part of the film is definitely its ending. Like Bobbie, we also believe that Jude is going to break into methadone cabinet. But, the dip in the cool means that these ‘animals’ confined to a form of cage have finally become free. Did Jude kick-up his habit (it doesn’t seem so he will)? Did Bobbie go to her mom instead of starting the drug cycle? We can’t say for sure. Nevertheless, in the days, when the lovers were away from each other, they have made choices that didn’t push them into cyclical activities to feed the ‘inner-animal’ (Bobbie cancelled her date, talked with her estranged mom; while Jude went through the program). Does the act of swimming in the pool a gift from Jude? A parting gift, where he as an act of selflessness wants to let her go? To lead a better life where he doesn’t want to drag her down with old habits? Again we would never know, but it fills us with a fine, overwhelming sensation. 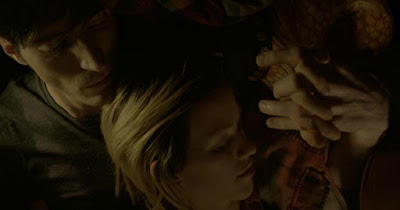 “Animals” (86 minutes) haven’t totally transformed the drug-addiction narrative elements. Yet, thanks to good performances and ambiguous writing, it remains psychologically complex, where no easy reprieves are found.