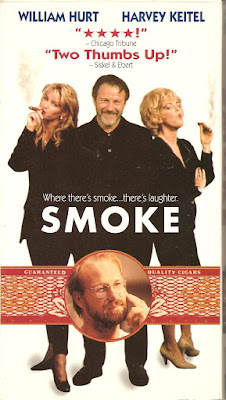 Aren’t our lives like smoke that dissipates, leaving bittersweet aftertaste on the memories of those we love/loved or got acquainted with?  In that way, great movies could also be compared with smoke, leaving traces of pleasure to savor for all our lives. Similarly, Wayne Wang’s “Smoke” (1995) posesses the unhurried pace of a good life and uses the hook of a narrative to ponder over the mysteries of human condition, which subsequently leaves a strange and fascinating after taste in our mind & heart.  “You’ll never get it if you don’t slow down, friend” says a central character in the film and that pretty much comes off like a warning to those expecting a hastened drama with nicely dressed-up resolutions. “Smoke” is an episodic, contemplative and amazingly vibrant movie about strange coincidences and inexplicable changes.

Written by novelist Paul Auster and set in the early 90’s Brooklyn, the film follows a formula used in Robert Altman’s “Shortcuts” (1993). However, the tangible emotions injected into the script by deft direction and an excellent ensemble doesn’t make it a derivation. The inherent gentle nature of the film also brings to our mind the movies of masterful film-makers Yasujiro Ozu & Wim Wenders. In “Smoke”, the central place that brings together the seemingly random characters is a cigar store, situated at a corner of the Brooklyn neighborhood, managed for 14 years by Auggie Wren (Harvey Keitel). Auggie is natural born story teller and loves to converse with his customers, while selling them quality cigars. Paul Benjamin (William Hurt) works as a storyteller. He is a novelist, whose life is filled with despair after the death of his beloved wife in a random shoot-out. In an earlier sequence, Auggie shows his good, friendly customer Paul his life’s work: a massive collection of photographs neatly stacked in albums, and all are taken outside his shop at the same time (8:00 am), every day for the past 14 years. 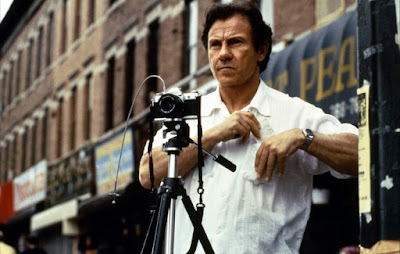 Paul hurries through the album, saying ‘it’s all the same’. Auggie replies that aforementioned, beautiful line “You’ll never get it, if you don’t slow down”. Now, Paul slows down and sees his dead wife, walking to work, in one of the photographs. He cries over and something is changed within him in that little moment and strange meeting. Paul is also saved from a traffic accident by a 17 year old drifter Thomas aka Rashid Cole (Harold Perrineau). He offers the young man a lemonade and that if Rashid wants, he can stay at his place for a day or two. Rashid is one the quest to track down his father, Cyrus Cole (Forest Whitaker), who was long presumed to be dead. He finds his father running a run-down garage and asks for work. When Cyrus asks for Rashid’s name, he says ‘Paul Benjamin’. One day, out of the blue, Auggie’s ex-girlfriend (Stockard Channing) meets him at the shop to seek his help to save her drug-addict daughter (Ashley Judd), who may be Auggie’s daughter too. Describing the character nature or lives of these people with words, may not make us to forge an emotional bond with them, but the adorable low-key performances along with a humanistic script really offers a touching experience. 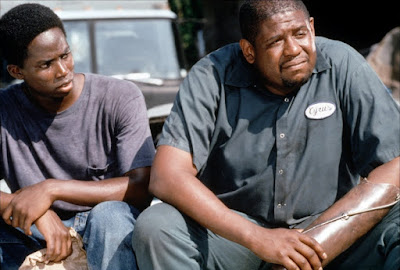 Much of the dramatic events in the characters’ life happens off-screen or seems to have happened in the past, and so there’s no plot to speak of. Like when Paul slows down and appreciates Auggie’s collections for what it is, we would accept the movie’s beauty by not searching for narrative trajectory. Of course, not all of the situations or characters keep on giving us the resplendent feeling. There are quite a few contrived, melodramatic or idling sequences, but for the most part of running time, the events aren’t forced or remain totally unnatural. Director Wayne Wang and Paul Auster had worked in harmony to bring out their unified vision in realizing each of the simple sequences. If the excellent cast brings the extraordinary emotional catharsis in the many occasions, it is Wang and Auster, who makes us to genuinely feel for characters and to relate with their pains & dilemmas.

Two stories serve as bookend in “Smoke’s” narrative. The one at the opening is told by Paul to Auggie about a  English man, who had tried to weigh the smoke from a cigarette; and the story at end is told by Auggie to Paul, which is a Christmas story involving a thief, a old blind grandmother, a missing wallet and a stolen camera. And, if the first is about elusive nature of life and the things we miss in life (but can’t say what it is), then the last one (delivered in a brilliant monologue by Keitel) is about mysteries of chance meeting or the necessary lies we tell ourselves to make something out of life. Whatever, these two stories are about it celebrates the power of storytelling. In some manner, the stories told by the characters might be neat concoction of lies, but still they reveal some deeper truths about the human condition. Paul Auster’s script ruminates on how our past experiences and thoughts like smoke becomes immaterial wisps, floating around us. It also talks about the impermanent nature of human lives. Auggie’s camera is fixed at a place and captures people day-to-day. It may seem nothing on a outward glance, but a closer look reveals a lot. The photographs become a witness of life moving by before our very own eyes. Eventually, “Smoke” is about celebrating the little moments and small coincidences, which may bring out huge changes in our lives.

“Smoke” (108 minutes) is a subtle and finely textured study of a community and its people. It emphasizes on the significance of story telling and the strength of being connected with fellow human beings.