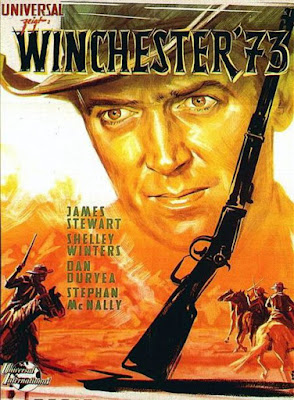 It would have been thought of as an unusual choice to make James Stewart play a frontier protagonist in Western genre. Although Stewart has been in quite a few crime films before the start of 1950 (for eg, “Rope”), he is best known or personified for his desperate and honorable lead characters (“It’s a Wonderful Life”, “The Shop Around the Corner”, “Mr. Smith Goes to Washington”, etc).  In Anthony Mann’s noirish Western “Winchester ’73” (1950), Stewart played a character that was more furious, cynical and even ruthless unlike his previous roles. Over the next five years, Stewart and director Mann collaborated for seven more films, of which four belongs to Western genre (Stewart knew Mann from his early theater days).

Before the making of “Winchester ’73”, Mann was predominantly known as a noir director (“Side Street”, “T-Men”). His well stylized films featured strong villains, malevolent surroundings and anguished heroes. By 1950, when director Mann made his leap into frontier movies, his features resonated with the same noir sensibilities, and also withheld rich, complex psychological undertones, which transcended certain Western genre trappings. As always, Mann’s protagonist, Lin McAdam in “Winchester ‘73” is an intelligent man who unrelentingly pursues for justice, even if he has to traverse through dark psychological disputes. The central plot of the film involves guns and Native Americans like many routine frontier movies of the era revolved around. There are also easily identifiable archetypal sub-genres in the plot – revenge and chase movie. But, still Mann’s directorial style maturely probes into his characters’ subconscious unlike other gung-ho, gun-crazy flicks. 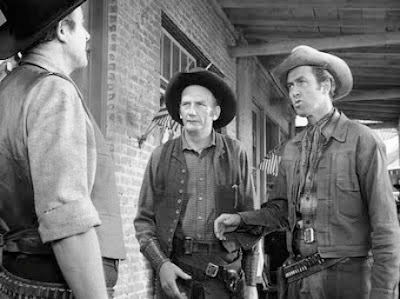 The movie opens with typical wide-shot, where two tiny figures are seen riding along a ridge. Nevertheless, as the story line progresses, things become more claustrophobic and profound. The two riding men – Lin McAdam (James Stewart) and High-Spade (Millard Mitchell) -- reach Dodge City and the long view of the streets indicates that it is a city extending in all directions. It is 1876 and the day of ‘Big Centennial Celebration’. The duo has come for the sharp-shooting contest as well as to look out for Lin’s arch-enemy, a shady guy named Dutch Henry Brown (Stephen McNally). The first prize for the winner is a much coveted 1873 ‘One-of-a-Thousand’ Winchester rifle (famously known as ‘gun that won the west’; US President Grant had one). The local sheriff Wyatt Earp (Will Geer) shows the two men around the town, before confiscating their guns, an ingrained local law applicable for all. 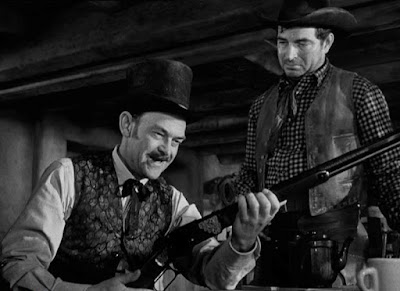 Lin walks into a bar looking out for Dutch. He sees Dutch and Dutch sees Lin, and as a reflex response the gun-less men attempt to draw their guns. The whole of Lin’s dispute with Dutch isn’t revealed, but there’s a talk of Dutch ‘shooting a man in the back’. It all looks like an age-old contrivance, but there is a fine visual control and diffusion of tense moments that we don’t concentrate much on the familiarity. The contest ensues and both Lin & Dutch repeatedly hit on the bull’s eye, vying for the Winchester. Eventually Lin wins the rifle, but Dutch’s obsession for the object drives him to steal it from Lin. Later, Dutch is aced by gun trader in a card game, who claims the Winchester. The gun trader meets a bad end, and so a trail starts, where we observe the desired rifle going through the hands of a young woman Lola (Shelley Winters), her fiance Steve and a psychotic outlaw Waco Johnny Dean (Dan Duryea). The characters who encounter the rifle are awestruck and it also brings out bad luck & dark desires.

Without any doubt, we could call this film an ostensible tale. And, there are also plenty of loose descriptions like “All white men are thieves. In peace, they steal our land; in war, they steal our woman”, “An Indian would sell his soul to own one [Winchester]”. These anticipated aspects of the movie, under the hands of another director, certainly wouldn’t have charged into thematic depths. But, director Mann regardless of the predictability factor sets up each sequence that burns with a fierce intensity and makes it up as a skillful character study.  Borden Chase’ script amply arranges the forward motion of narrative, although it is Mann who had masterly weaved an atmosphere of claustrophobia and tautness. 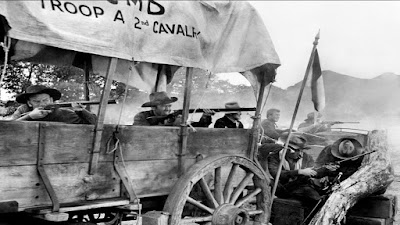 Mann’s vision of old west totally lacks the romanticized elements. His protagonist becomes increasingly pragmatic and his quest takes darker notes. Love, one of the quintessential aspects in Westerns, is either absent or remains in a twisted form. The love between siblings has eroded; Lola’s love for Steve or vice-versa is questionable, right from the first time we see them. With Steve’s act of cowardice, the elemental romance is fully exhausted. Mann is also fascinated by observing consequences of a human action as well as human reactions. During the quest, High-Spade questions Lin McAdam on ‘whether he is beginning to like the vengeful mission or whether the dead would have liked it’. High-Spade also asks “What happens when the hunt is over?” These mature questions contemplating the aftermath and the past usually have no place in Westerns that are always defined by its macho principles. Shelley Winters’ Lola too rises above the usual dispensable woman characters of this genre. Her nonchalant looks after getting abducted by Waco subtly hints at her futile past in the frontier. 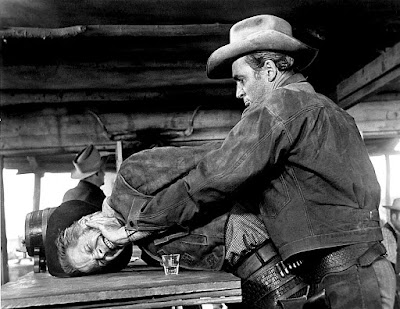 Director Mann is also at his best, when crafting those boisterous action sequences. The battle between the army and Native Americans plus the final hill-side gun fight are loaded with a bewitching, gritty tone. James Stewart shines at one of his earlier darker characters. He is convincingly menacing when twisting the arm of Waco Dean and he perfectly imbues sadness to his actions. Mann, despite all his noir sensibilities, might seem to indicate at a happier ending, but the final shot of the perfect rifle and the fade out to a black screen makes us question on whether Lin would really have a sense of happiness in his life.

“Winchester ’73” (92 minutes) is a classic Western that diffuses psychological overtones into what we would otherwise call as a ‘simple, gun-crazy genre’. It set the bar for other innumerable, mature takes on Old West.