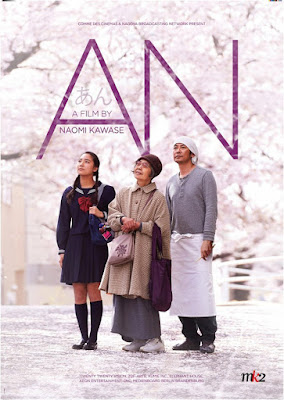 Japanese film-maker Naomi Kawase’s works often inspire extreme reactions from the viewers. Her introspective, poetic and very personal feature films were either praised as ‘awe-inspiring’ or ripped apart as ‘awful’. Nevertheless, her film have garnered honors and award in many film festivals, including Cannes (she served as Jury in Cannes alongside Speilberg when “Blue is the Warmest Color” was selected for ‘Palme d’Or’). She is one of my favorite modern Japanese film-maker and with “An” (aka “Sweet Red Bean Paste”, 2015) Kawase has directed her most accessible and unusually warm crowd-pleaser. “An”, based on the delicate novel by Durian Sukegawa (Kawase’s long time associate), opened last year Cannes’ ‘Un Certain Regard’ section. “An” also marks the first time for Kawase, in her two decade film-making career, to have chosen a material of another writer to adapt & direct. The plot of the movie pretty much has everything to be transformed into a standard ‘feel-good’ movie, but director Kawase’s contemplative stance gives us a more profound, bittersweet experience. It is about three simple souls finding their contentment in life, but the way it’s presented & performed urges us to make a thorough introspection.

The movie opens on one of the often repeated, symbolic meaning offering, Japanese setting: Cherry Blossom. The flourishing and the vanishing of blossom is a fitting reminder of our own mortality. In one such booming day, 76 year old Tokue (Kirin Kiki) sees the small dorayaki shop (a popular Japanese confectionery) and its sign requesting for ‘part-time help’. The shop’s chef and manager is the sad & reluctant middle-aged Sentaro (Masatoshi Nagase). His predominant customers are giggling school girls. When Torue asks for the part-time work, he gently rejects, doubting her ability to handle the physical strain. The next time she visits the shop, the old lady leaves with him the incredible sample of ‘an’. The red bean paste or ‘an’ is the soul of ‘dorayaki’, which Sentaro gets from a bulk order. Soon, Tokue arrives at the shop early in the morning and shows unbelievable attention & live for every single ingredient to prepare the bean paste. Sentaro’s soulless routine is disrupted by gentle Tokue’s lively presence. 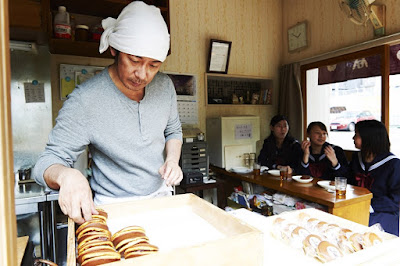 The elderly Tokue, despite all her inner emotional pains, moves like a bundle of energy. There’s heartiness in the way she greets birds, trees and people. She is content be under the warm sun and shining moon. Tokue’s culinary talents make customers of all age to flock the shop. Through Tokue’s sweet paste, Sentaro sees a way out of his heavy debt. There’s also the charming school girl Wakana (Kyara Uchida – Kiki’s grandchild), who is a regular customer for Sentaro and he often gives her the ‘rejects’ to take it to home. Wakana lives with her single, inattentive mother and kind of sees Sentaro as the ‘father figure’. Wakana is also enamored by Tokue’s culinary skill as well as her spiritual perspectives. As the lonely souls of Sentaro and Wakana learn to behold the wonders of nature and live in the present, the diseased thought of the society scrutinizes Tokue’s disease. The banishment Tokue faced all her life comes back with full strength.

“An” is as light-hearted as the pancakes Sentaro make and as sentimental as the bean paste carefully made by Tokue. And, yes it also gets a little didactic towards the end, but it never veers into melodrama or soap-opera. Director/writer Kawase’s impeccable meditative pauses and musings add a layer of weight and context. Although, Kawase’s story is built on delightful gastronomical premise, her trademark themes are very much present in it. At its core, “An” turns out be a tale of people understanding and embracing the communion between nature and human (director’s pet theme: “I don’t see myself as someone who lives in the nature but someone who’s only living because of the nature”, said Kawase in an interview). While Kawase’s shots of yellow sky, sun-shine filtered through branches, cherry blossoms and changing seasons reflects her favorite imagery, she also finds a robust human core in portraying the relationship between Sentaro and Tokue. Kawase’s precise direction effectively helps in the film’s second-half, when it moves away from the ‘feel-good’ path and starts encompassing or revoking the characters’ personal histories. Some may find the tonal change in the later half (to bittersweet) to be deviating, but I felt Kawase has perfectly & unsentimentally zeroed-in on the themes of social ostracism. There’s couple of monologues that manipulate our tear-ducts, but we can’t also ignore the positively infectious wisdom in those passages.

Tokue, Sentaro and Wakano, who represent the three different generations, lack a vital figure in their life – child, mother and father respectively. But, thankfully “An” doesn’t take the cliched path by making these characters co-exist as one happy family in the end. The film simply reminds us to look into ourselves and understand our place in this beautiful (and vile too) world. Tokue passes on this significant wisdom to the afflicted middle-aged man and young girl, and in passing out this wisdom, she feels a comfort too. The film has a rarely heard sociopolitical side, which the director brings out without a note of exploitation. The narrative implicitly indicts the way Japan had cruelly alienated its people, afflicted by leprosy (and other disfiguring diseases). Tokue’s admiring quality in talking & laughing with nature and its beings takes a new meaning, when we find out about her ‘pariah’ status (Tokue lives in the quarantined compound from her girlhood). Earlier, in the cooking session, when Tokue communicates with beans, it just seemed like a silly exercise to make the character likeable, but in the end upon reflection those earlier moments pervades in our mind with a lyrical effect. After getting to know about her seclusion, Tokue’s happy relationship with natural world looked divine.

The three central performances are as spectacular as Kawase’s visual treatment. 72 year Kirin Kiki (“Still Walking”) approaches her character with empathy and intuition. The whole presence of her brings a warmth and sweetness or sadness to the proceedings that all Kawase needs to show is little restraint in framing her. Kiki is pretty much the cherry blossom impersonated – a symbol of love, joy and spiritual awareness. Hearing Kiki’s soothing voice during the final monologue easily manipulated by tear-ducts, but the film’s most genuine tear-jerking moment is visualized with pure silence. Take the scene when Tokue understands that her presence in the shop isn’t going to bring the customers. She sadly looks and briefly smiles, when every possible customer passes by the shop. Sentaro asks her to ‘take the day off’ and a moment of epiphany flashes through Tokue’s face that’s very painful to watch. In that small moment, Kiki conveys Tokue’s apprehension of how all the good thigs have come to an end. She slowly removes her apron, puts on the overcoat, takes the bag and with a smile says ‘see you later’. As Sentaro observes her from the shop window, we see Tokue saying goodbye (she waves her hand) to the cherry tree and the birds. It’s hard to withhold the tears when Tokue moves away from the frame. Partly because that bitter-sweet face of Kiki reminded me of my affectionate grandmother and partly because of the way Tokue handles the sadness and finds a beauty to wave her hands at. Mastatoshi as Sentaro also shows superb restraint.

If we can understand our connection with the natural world; if we can learn to value ourselves and not try to fix a target to be someone or try to achieve someone’s idea of happiness, then living would no longer be a struggle. That’s the simple wisdom, Kawase conveys in “An” (113 minutes) through profound visuals and relatable emotions.

at May 20, 2016
Email ThisBlogThis!Share to TwitterShare to FacebookShare to Pinterest
Labels: Family Drama, Japanese Cinema