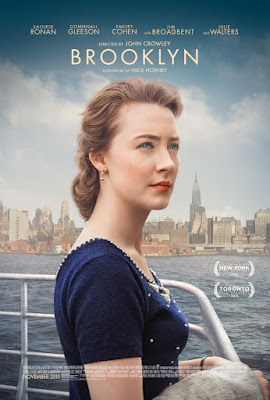 I always have unceasing questions about life or my existence that pushes me to think of the term 'realist'. When all my unstoppable questions meet an immovable personal tragedy, I gradually become the skeptic of higher range. A healthy amount of skepticism is necessary to survive in this world, but the skepticism I am talking about gives a tsunami of doubtful feelings, which eventually has the danger of making me retreat into a cocoon. But, I often encounter people who are the precise opposite of me; people who wade through life carrying abundant nutrients for soul: hope and self-respect. Sometimes they too devolve into worst forms of narcissism and make me think that they are not much of a realist. However, those people help me reinstate hope, when coping with life’s quiet emptiness. I don’t know if I am right, but I now think that in life there are no perfect happy beginnings or endings. A luminous light shines through, when grasping in the dark to untangle from life’s complications. We may never find a solution for those complications, but the vital thing is to be ready to face that light; to cherish it in our memory for it may provide a path through this darkness. John Crowley’s “Brooklyn” (2015) might be referenced as a triangle love story of a simple, beautiful Irish girl. But, that’s not the right description. “Brooklyn” is about a person, learning to treasure that ‘light’ while confronting a life of hardships and scorching dilemma. She not only allows the hopeful luminescence to slip through her life’s complications, but elegantly shares it with a soulmate.

Based on Colm Toibin’s novel, “Brooklyn” was adapted to screen by another novelist Nick Hornby. On the outset, this story has everything to veer into a formulaic territory: an impoverished town during World War II; the journey of an immigrant; the search for American dream; predictable romances; death of a loved one and so on. But, the emotionally attuned sense of direction & writing plus the surefooted lead performance from Saoirse Ronan makes it one of the most emotionally affecting movies of recent times. “Brooklyn” is pretty much a fairy tale in its depiction of geography and immigrant experience, although through the Irish girl’s emotional journey, we are able to grasp intimate epiphanies which could be interrelated with our own existence. The movie begins on a bleak early morning, where our heroine Eilis Lacey (Saoirse Ronan) is frowned upon in God’s abode, and ends on a street pavement in one fine morning, where Eilis is all ready to receive and give love. 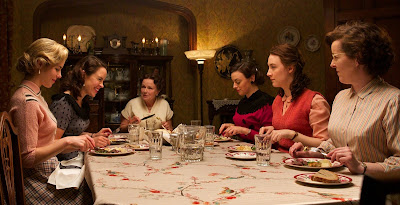 Eilis has grown up in hard times of World War II in an impoverished province Enniscorthy, situated in the south-east of Ireland. Although, it is early 50’s, the economical depression of the nation keeps everyone on the edge. Eilis is underemployed at a local bakery store, owned by a stinging crone Miss Kelly (Brid Brennan). Eilis lives with her widowed mother and caring elder sister Rose (Fiona Glascott), who works in a book-keeping office. Although Rose is bogged down by familial and economical pressures, she wants her sister to live the dream. With the help of local Parish, Rose gets sponsorship for Eilis to move to Brooklyn. She stays at a Catholic boarding house, run by well-meaning matron Ms. Kehoe (Julie Waters), and occupied by clucking, but amiable young girls. Eilis finds a job attending customers at supermarket store ‘Bertocci’s’. However, a bout of homesickness hits her as she is unable to intermingle freely with the happy go lucky persons of this big city. The letter from sister makes Eilis to shut herself from human contact. Father Flood (Jim Broadbent), who had placed Eilis in the boarding house and found the job tries to reinstate some kind of normalcy and hope in her life. 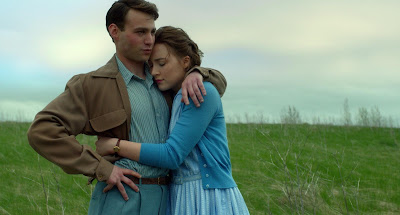 Father Flood offers comforting words about homesickness: “It will make you feel wretched, and then it will move onto somebody else”. Father pays tuition for Eilis to learn book-keeping to envision a career that isn’t pertained to departmental store. Soon, Eilis also finds a person who brightens her mood. She meets a nice, and little clumsy Italian plumber Tony Fiorello (Emory Cohen) at a dance hall. He doesn’t sweep her off her feat because they both are level-headed in contemplating the possibility of romance. There’s an air of authenticity to the way they speak to each other that we yearn for them to fall in love. Eilis is unsure whether she loves Tony, although she appreciates his companionship. But, love transforms her or may be the transformation makes Eilis to perceive what love is. She even begins to assert herself as a sexual being. Nevertheless, a tragedy occurs which demands the girl to make one heart-wrenching decision after another. The problems and the outcomes might seem simple & maudlin but there’s a profundity here that makes each nuanced expressions an arrow, piercing our heart. 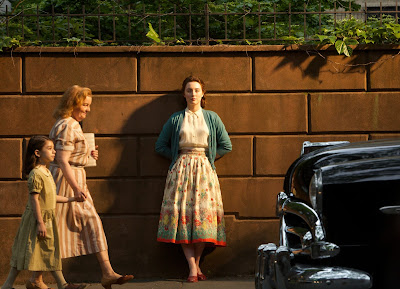 Much of the joy in experiencing “Brooklyn” lies on how much we see ourselves in the emotional trajectory of Eilis Lacey. You can call her as a dull girl with little imagination to be a protagonist. But, I think she is dull and not perfect like every one of us. Although I and the character of Eilis are separated by gender, geography, time, and reality, I am able to sense and understand her inner anguish & dilemmas. The beauty of Nick Hornby’s script (and may be Toibin’s novel too) is making us feel that it could be our own life story. We all might have felt deluge of homesickness, promising love, the yearning to belong to a place, and the conflict between making a selfish and sacrificial decision. A lot of viewers might have stopped feeling for Eilis when she kind of falls for Jim Farell (Domhnall Gleeson). There is a hesitance within Eilis when she falls for Tony, but no so much when she laughs with Jim. It makes us doubt her selfishness (although it is understandable). If you see Eilis’ story as a weightless object floating through space, then Hornby, Crowley and Ronan work together to imbue a gravitational pull and depth to this object. All you had to do is let yourself pulled in by the story and patiently peel back its layers to understand about love and life. While analyzing Eilis’ alleged hesitance in NY chapter when Tony proposes love, we need to realize that she is a miserable, homesick girl, who never had the taken big life decisions. Eilis arrives at Brooklyn because Rose makes her believe that a better life awaits her; she remains as a passive character when talking with lady on the boat and in the boarding house.

Eilis never sees the subtle control and manipulation, others place upon her. Of course, love is a subtle form of manipulation, which can positively affect us. It is love that shows her path of hope to break free from passiveness and to understand the nether side of manipulation and control placed on her life. When she comes back to Ireland, Eilis’mother basically shoehorns her to fill in Rose’s place. The promise she had made for love allows ascertaining this subtle manipulation. However, Eilis likes the attention she gets on her homeland. Among the inexperienced peers, she attains uniqueness.  She can actively see through the affectionate gestures of Jim. But, it isn’t about Eilis choosing Tony or Jim; it is about her choosing the right kind of life she wants. If Eilis in the ‘Brooklyn’ part of story shown to withhold a clear perception of love, then the whole of ‘Irish’ act would become obsolete. It is the uncertainty about choosing the right love and life that lends us empathy in perceiving Eilis. The active, free choice she makes at the end might come off as preordained, happy ending in some other romantic movie, but here it is genuine and even tear-jerking. May be Eilis should have been honest to Jim or at least with her wrecked mother. But, then how many of us are always honest in our youthful life, while waltzing through landmine of inner conflicts? In movies, love is thought to be a proven scientific theory. It’s not a set of formulas which says ‘If you do all this, you will get this result’. The success of love or life is based on the series of difficult choices & sacrifices, one has to make freely from deep inside once heart. “Brooklyn”, within its fairy-tale atmosphere and ideas, realistically broods upon love that survives on top of societal expectations and conventions. 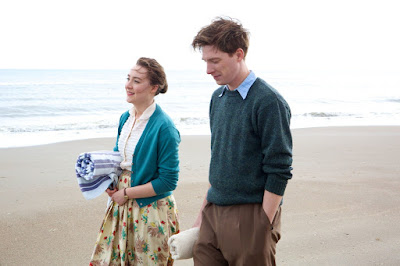 There’s a wonderful interpretation made in an article, published in ‘screenprism.com’ which alluded that the entire love story and its conflicts is a metaphor for ‘immigrant experience’ ('How the love story in "Brooklyn" a metaphor for immigrant experience'). The underlying theme in Eilis’ inner conflict is choosing between love in home and away from home. This theme is crisply explained by the author of article. The film also touches upon humans’ desire to belong to a place. When we gain as much as wisdom and worldly experience as possible away from home and then return back, the place we called ‘home’ will look different. We might gain solace and respect, but the old life at home becomes an elusive thing. When Eilis walks on the beach with Jim, she says "I wish it had been like this before I went. Before Rose died”. It’s the paradox every modern individual, going away from home in search of a job faces. All we need learn is how kindness and love could make turn any place into home.  That’s another beautiful thing about the film; it isn’t designed to be an one kind of story. The absence of moralizing approach or absence from spewing out a prescribed path for success or happiness makes us feel at home.

Socioeconomic & sociopolitical conditions of Brooklyn or Ireland are sensibly avoided because this is very much a personal story. The US war in Korea is never mentioned and economic depression plus the class-based oppression in Ireland are only mentioned in passing. Brooding over those topics would have only added extra melodrama, and no way place a role or adds depth to Eilis’ decisions. Director Crowley and cinematographer Yves Belanger draw upon an impressive & deeply nostalgic 50’s settings. Of all their lyrical frames, my most favorite one is the final visuals when Eilis stands under warm sunlight, waiting for Tony. It is not just an image that provides relief for the movie viewers; it’s an image that reassures us about true love; it’s an image thriving with life. As Eilias, Saoirse Ronan has given her best performance yet. The close-ups of her face resembles that of a renaissance era painting, allowing us to catch even the smallest of expressions passing through the face. Emory Cohen is also splendid as Tony, whose evocation of’ James Dean’ kind tenderness & vulnerability is a marvel to behold.

“Brooklyn” (111 minutes) is an amazingly restrained and profound personal story that feels congruent to our times and thought process. It is the kind of film, where a simple advice in a dance class (“Secret is to as though you know what you’re doing”) while calmly contemplated could very well seem like a vital life lesson.

at May 12, 2016
Email ThisBlogThis!Share to TwitterShare to FacebookShare to Pinterest
Labels: British Cinema, Romantic Cinema