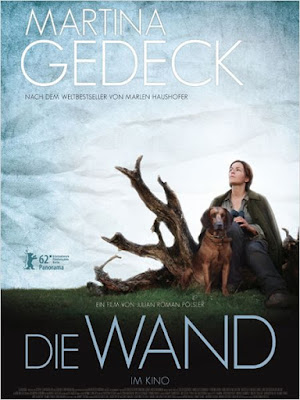 “I went to the woods because I wished to live deliberately, to front only the essential facts of life, and see if could not learn what it had to teach, and not, when I came to die, discover that I had not lived” says the American philosopher & naturalist Henry David Thoreau, when he made an experiment of simple living at Walden pond. Thoreau’s social experiment and spiritual discovery, as elucidated in “Walden” gives us an instant to escape for an idyllic land of solitude. In this digital age, we might have had a fleeting desire to distance ourselves from material pleasures and to find, communicate with our inner self. It is said that only in solitude our inner freedom can grow. But, even if we attain that level of freedom, will it be a destination or just another milestone in life, making us to contemplate ‘what next?’ In Julian Polsler’s Austrian-German production “The Wall” (aka ‘Die Wand’, 2012) a middle-aged, unnamed woman begins a journey of solitude and freedom in a Walden-like environment. The only trouble is that she can’t go back to the society to seek some form of connection. That luxury is cut off from her because she is trapped inside an invisible wall, doomed to live alone in the resplendent Austrian Alps.

Based on the 1963 novel by Austrian novelist Marlen Haushofer, Julian Polsler’s movie is rife with symbolism and screams for metaphorical readings. It never offers conventional narrative delights and reflects on the human condition for an extended period of time that may irk viewers, expecting some kind of resolution. Those who are interested with the themes of isolation, memory, and human’s relation to time & nature could connect with the glacially paced narrative. The visual tone is consistent and the stunning landscapes are a delight to behold. Martina Gedeck’s (“The Lives of Others”) performance as the disconnected is riveting. However, the script and direction falters in the latter part of the woman’s emotional journey. The abundant explanations given in the voice-over do truly elucidate upon the woman’s feelings about isolation, but something blocks us off from really connecting to those expressed feelings. I’d have had a more cathartic experience, if director Polsler had more imaginatively used the silence and less of the redundant words.

The film is mostly narrated in flashbacks as the unnamed woman in a remote alpine hunting lodge, writes on few bits of paper to recollect the strange incidents that has trapped as well as offered her a freedom. On one fine day in May, Gedeck’s nameless woman arrives with an older couple to the hinterlands, exuding postcard beauty, for a weekend. An upbeat song plays in the radio, which was written by the film’s director (thanks to the user who noted it in the IMDb discussion boards) and the song’s English title as noted in the end credits is ‘Freedom is a Journey’. So, as the car cruises through the open road, it’s alluded that she is going to have all the liberty, available in the world. But, when we see the disoriented look in the face of woman, writing the journal by diving into old memories, we wonder ‘Is this how true freedom looks like?’ The elderly couple, who had brought her to the lodge set off to a nearby village, leaving their beloved dog Luchs.

In the morning, she is surprised to see that the couple hasn’t returned yet, and so decides to visit the village. The dog runs before her and at the turn she hears the dog, yelping in pain, as if it has hit something. Everything looks as usual, but at one point in the narrow road, she is blocked off by an invisible wall. With confused looks, she tries to reach her neighbor’s cottage, but once again the invisible wall halts her and the cottage’s occupants remain inanimate, frozen in an immovable realm. As the woman can’t find a way out of this strange confinement, she arms herself with hope and learns to live alone in the wilderness. The beguiling Alps winds up its clock, while she cultivates, harvests, hunts, chops wood, and ruminates upon her feelings, human nature and nature. Although, the woman is shunned from human connection, she is bestowed with the companionship of a pregnant cow, a stray cat and the loyal friend Luchs.


I haven’t read the original novel, but the existential dimensions of the narrative is somewhere between Stephen King and Kafka. The film moves best when the woman like Robinson Crusoe wanders through the mountains, connoting inexplicable situation. The philosophical musings about the animal and human self within her is well etched. She has the moral qualms about hunting & killing for food. When she hunts a deer, she can’t get rid of the disgust (the haunting shot of dying deer stays with us long after the movie’s end), and that same human feeling stops the woman from shooting a beautiful fox. As the nameless woman says in the journal that it would be better if she stop thinking like a human being. Like all of us, she too is bestowed with memory, fear, grief, mercy, and other humane feelings. But, does it stop or burdens the human race to gain the ultimate freedom or an ideal sense of solitude? Similar kind of questions hangs in that brooding atmosphere, which has haunted our sages for all the ages. 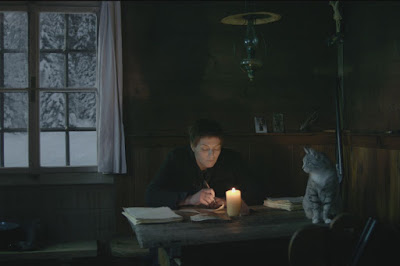 It is also important to ask the questions of ‘why’ & ‘what’ regarding the sudden rise of an invisible wall. There’s no reference to sci-fi or mystery in the narrative and so it’s good to not expect a tidied-up resolution. Is her existence, a metaphor for the loneliness of our very own beautiful earth? Is her lonely existence, an exploration of depression and abandonment? Does her existence is symbolization for the microcosm of humanity? Is it about the ‘walls’ we erect around ourselves to ironically search for ‘freedom’? Or is it about our desire for seeking something ‘meaningful’ in life, but our inability to express that ‘meaningful’ thing'? We can interpret it any way (and I would have definitely failed to rise many questions) and each path would provide an abundance food for thought. In the tale, we see the positive force in the little pleasures life throws at us. A supper after a hard day’s work, a birth of life, warm sunlight brushing our face, lying on the soft bed of grass, the loyal companionship of dog, the bleating of a cow is what gives the woman a much-needed solace. Seen from this perspective, the message is clear. While we desperately cling on for a meaning, confront darkness, and seek unavailable pleasures, love provides the ultimate relief. But, then we can never escape from the dark, empty side of humanity. The woman learns (in the end) about the pains, a fellow human life is capable of imparting. As the savage man hacks at the woman’s beloved companions, it becomes a symbol for the nether side of being human – a stark desire to destroy all our small victories & simple pleasures.


Director Julian Polsler imbues a bitter-sweet quality in framing the beautiful stillness of nature. He patiently allows setting in the appeal and anxiety of such a scenario. But, the isolation of the woman doesn’t fully settle into our heart & mind. The journal manuscript is ponderous, but those words aren’t accompanied by imaginative or magnetic visuals to pull ourselves in. The manuscript reading type of narrative is a good device for a novel, but in the visual medium it tires us after a period of time. Gedeck’s raw and steely performance is also affected by tiring narrative course. However, the fine philosophical questions even this partly good narrative poses at us would definitely kindle the urge to search and read the classic book.

“The Wall” (108 minutes) is a fine introspective tale of loneliness, depression and the manifold uncertainties we encounter in life. Some of the ineffectual narrative strands, however, hold off the film from being the masterpiece it could have been.

at May 17, 2016
Email ThisBlogThis!Share to TwitterShare to FacebookShare to Pinterest
Labels: Existential Movies, Survival Films