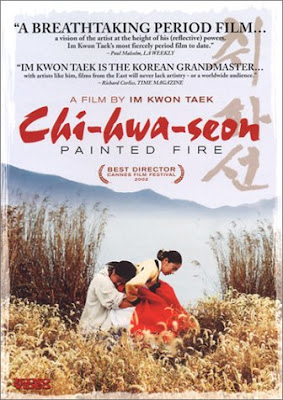 ‘Hey, it’s just art! Why do these artists drive themselves to a point of madness in order to create a mere piece of art? Isn’t art easy for those who have really got the talent?’ These are the questions and thoughts I once had and continue to hear from others. If there are great artist in this world, who can produce a majestic art and be satisfied with it, then you should envy those personalities. Most of the artists unceasingly self-criticizes & doubts their work, irrespective of the acclaim they receive. Their agony and inner-struggle takes a break only when they strive to germinate a satisfying art. The minute a artist finishes his work – be it a painter, writer, sculptor or a film-maker – an emptiness seeps into their heart and the all encompassing talent becomes an all consuming force. An art might bring us solace, energy and hope, but an artist, more often feels like walking on a tightrope. Korean film-maker Im Kwon-Taek’s visually and thematically rich “Painted Fire” (aka “Chi-hwa-seon”, 2002) chronicles the life of one such celebrated artist ‘Jang Seung-ub’, whose illustrious artistic fire paved way to powerful paintings, while also created hollering inner demons.

Movies about painters often take two different kinds of approach by either showcasing the artists’ tortured & visionary sides or depict the artist’ significance from the perspective of tumultuous era they lived in. While films like “Pollock”, “Lust for Life” belongs to the first approach, a masterpiece likeTarkovsky’s “Andrei Rublev” belongs to the later. In “Painted Fire”, director Im Kwon-taek derives elements from both the approaches: it’s a focused character study of the painter, who hailed from a poor background; and through his social class, the film perceives the volatile times of Korea. The result is slightly confusing since the script includes five decades of the painters’ life alongside the chaos of 19th century Korea, from the peasants’ revolt to the invasion threat of Japanese. But, what makes “Painted Fire” a must watch, despite the perplexing jump in timelines, are the alluring visuals and Choi Min-shik’s zestful, fiery performance. 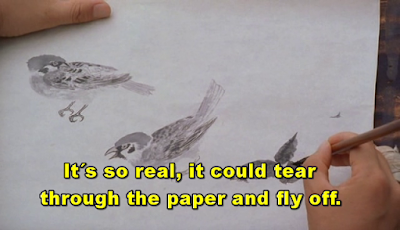 “Painted Fire” opens on the abode of some high-ranking Korean official in the 1880s, when the Koreans rebelled against corrupt government and foreign invasions. Sitting at the official’s grand house, Jang Seung-ub deeply contemplates as a long, white paper lies in front of him. An audience has calmly gathered around him, eager to see what his inner soul is going to express on the paper. He gradually starts drawing mountains, trees, birds and flowers. His deft movement of hands makes it seem so simple. The end product as usual amazes the rich personalities. Jang Seung-ub paints with such a desire that his representation of tree rustling with breeze instills a euphoric feeling on the people gazing at it (“It emanates divine strength as if ghosts were dancing around it”, says a man). While his artistic expression enamored people, his words tinged with slight arrogance & sarcasm, extracts polarizing reaction from the same people.  This opening sets up a stage to further explore how the celebrated painter’s genius spawns the inner torment and vice-versa. The sociopolitical chaos of Korea also instigates the painter’s cyclical emotions. 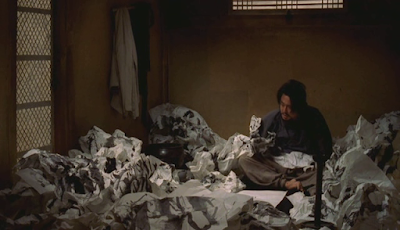 Jang Seung-ub was an orphan, who was saved from being beaten to death by master Kim Byung-moon (Ahn Sung-ki), a patron of arts. The master was the first one to witness the boy’s fire of genius and he sends teenager Jang to work as apprentice for one of the Korean painter. After the artists’ death, Jang is sent to study at the house of a Chinese nobleman, where he is attracted towards the master’s ailing sister (Son Ye-jin). He has one or two interactions with her, but it is soon shown that there is no possibilities of a romantic relationship between them (due to Jang’s class status). Later, Jang stuns the aristocrats by impeccably copying an old Chinese master’s painting, which he has seen only one time. His copies of Chinese drawings become very popular and soon Jang embarks on a journey to create original works. Jang was given a prestigious pen name ‘Oh-won’ and his original works boasts deceptively simple, lush landscapes, but the paintings’ startling clarity possessed the noblemen. But Jang neither cared about the acclaim nor agreed to fit his artistic expression into a set of rules. He vehemently tried to not be a prisoner of his spectator’s expectations. In those beleaguered times, Jang found exuberance through carnality and drinks. The fire within draws in beautiful woman to him and also chucks them out. And, all he could give the women (apart from sexual pleasure) is a token of his creative spirit (a painting). Even when Jang gets a chance to be a part of Royal Painting Bureau, his rebellious spirit forces him to escape from the Royal Chamber to spend some time with friends at a run-down tavern. 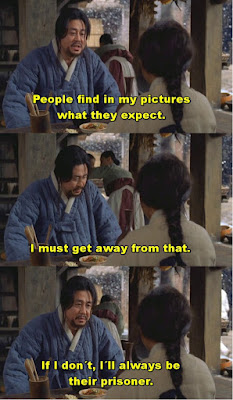 Veteran Korean director Im Kwon-taek is one of the very active and legendary figures of Korean cinema, who is dubbed as ‘father of Korean cinema’. “Painted Fire” (the director’s 95th film) was my first Kwon-taek film, for which he shared the ‘best director’ award at 2002 Cannes film festival (along with Paul Thomas Anderson for ‘Punch-Drunk Love’). As a prolific studio film-maker, Im made various genre films, starting from early 1960’s. He has admitted that he saw movies as an artistic medium only from the works he commenced during the mid 1970’s. From then on, he made more honored works like “Seopyeonje”, “Chunhyang”, etc. Although Im doesn't not have a unique directorial signature, he is a consistently skillful director whose narrative structure and beautiful visuals imbues an ultimately moving movie experience. In “Painted Fire”, director Im and cinematographer Jung Il-sung conjures up one astonishing visual after another, which keeps up with Jang’s paintings. Im also handles the central character very well. He doesn’t soften Jang Seung-ub’s drunken, lust-filled activities, but he is also careful to not reduce the characters’ inner torment into a caricature. Within the volatile times & tragic happenings, Im is able to weave a Zen-like calmness that makes to look beyond the artist’s passion and unworthy addictions. There are certainly few flaws in the narrative structure, especially in the way it fails to create a well-rounded female character. The director wants to connect Jang’s art and social class with the changing times, which haven’t been efficiently achieved. But, such flaws don’t bother us much, when witnessing the thundering performance of Choi Min-shik. 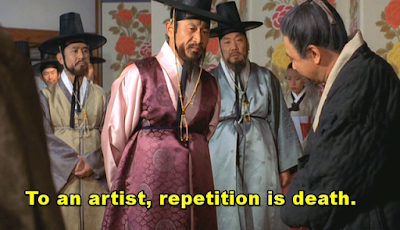 Choi Min-shik and Gary Oldman are two of my most favorite actors, who have the incredible ability to bring out a characters’ inner agony and primal instincts. They both can channel in this mix of anger and agony to create extremely tormented personalities as well as bad guys (for eg., “Oldboy”, “I Saw the Devil”; “Leon”, “Immortal Beloved”, etc). These two great performers zest also reminds me of Toshiro Mifune. As Jang Seung-ub, Choi Min-shik brilliantly brings out the artists’ central paradox: he is so ambitious but hates the success & fame that comes from it; he applies his soul to create such images of infinite beauty, yet he submits to wild cravings. Despite Jang’s boorish manner towards women and the young helper, Choi finds enough room to instill empathy for his character (in the same vein, Timothy Spall’s portrayal of eccentric painter JMW Turner remains as startling as this). In one of the movie’s powerful scene, Jang unable to find inspiration for painting lets out a scream like an animal. That little moment perfectly conveyed the inner screams I experience, whenever my creative spirit is left unsatiated with mounting failures.

“Painted Fire’s” historical elements and sufferings of the period are somewhat shown in simplistic manner, but many of Jang’s anguish-filled words leaves us a lot to contemplate about artistic creations. Why artists anguish themselves over restless perfectionism?  From where does this fire to create art come from and when does it vanish without a trace? What drives them to expand the boundaries of their art – Is it the spectators’ approval & denials or to transcend their own feelings of unworthiness? Of course, these aren’t easily answerable questions, but films like “Painted Fire” allows us to look at a existence filled with torment and self-doubt (like all our existence) which is transformed and enlivened by the unceasing pursuit for beautiful art.

“Painted Fire” (120 minutes) is a fascinating & blazing character study of a rebellious and hedonistic artist. It offers an emotionally overwhelming experience that doesn’t make us worry over some of its formulaic, artist-biopic conventions.

at May 24, 2016
Email ThisBlogThis!Share to TwitterShare to FacebookShare to Pinterest
Labels: Korean Cinema