Court [2014] – A Brilliant Indictment of a Creaky Gargantuan ‘System’ 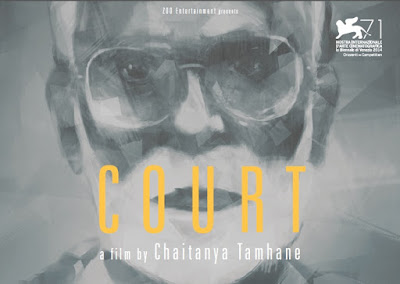 The one great thing I felt about Chaitanya Tamhane’s remarkable feature-film debut “Court” (while watching it the 2nd time) is how the film-maker has shunned any preoccupations to explore the timely themes through a rigid sociopolitical lens. And, so a viewer watching it shouldn’t chain its keenness and unique stylistic approach with the label ‘courtroom drama’. Yes, it exposes the absurd nature of a rabbit hole called ‘Indian Judiciary System’ and subtly broods over certain dark realities of Indian society. But Tamhane draws in these aspects on an intriguing humanistic level which instills a profundity that would be missing in ‘movies-with-a-agenda’. “Court" (2014) is about the modern Indians who don’t see or don’t want to see the bigger picture. It doesn’t just inquire upon the clueless, labyrinthine and highly interpretive nature of our legal system; it delves further into our clueless, byzantine thoughts, even when doing deeds out of sheer goodwill.

The film opens with a shot of a 65 year old social activist and folk singer (‘people’s poet') Narayan Kamble (Vira Sathidar) in a dense, local community, teaching school children the archaic, unchanging subject of Indian geography. Then he walks through the mazy neighborhood, boards a bus to commemorate a fictional ‘wadgaon massacre’, which could be related with the many brutal attacks on Dalits. The white-bearded gentleman Kamble now starts the real education for oppressed people by singing a song that denounces racism, caste-ism, nationalism and unbridled corruption. The director keeps his unwavering camera on Mr. Kamble’s performance and then transitions to long shot, observing the actions happening around the main action (police gather around the edges of the crowd). Then he is interrupted, arrested and charged for inciting a man-hole worker Vasudev Pawar to commit suicide (through another song performance). It is pretty much obvious that the charges are politically motivated and the judiciary system rather than reinstate old man’s right to freedom of speech espouses Victorian laws to swallow any voice of opposition.

Nevertheless, “Court” isn’t solely focused on the judiciary struggles of Narayan Kamble. While the film, on one hand, observes the absurdity of cases being adjourned for inane reasons, it also follows the inanity in the lives of three principal players – defense attorney Vinay Vora (Vivek Gomber), public prosecutor Nutan (Geetanjali Kulkarni) and Judge Sadavarte (Pradeep Joshi), who are all vital in sealing the fate of Narayan Kamble. The prejudices, perceptions, insecurities and their so-called goodwill make us ask:  how can the judiciary system remain objective in this ocean of bias and rigid moral conditioning? Vinay Vora is an upper Middle Class Gujarati, who likes jazz, cheese and good liquor. Although he is far removed to perfectly grasp the struggles confronted by his oppressed clients, he is thoroughly committed to the cause. Nutan is sick of seeing the same ‘old faces’ and thinks it would be good if they put away guys like Narayan Kamble for 20 years or so. But, despite her pitiless and bureaucratic manner of speaking, she is a middle-class working wife, taking care of two children and a diabetes-afflicted husband. The family enjoys having their little pleasures, like going out to have a lunch and watching a ‘proud’ Marathi drama about casting off ‘immigrants’.  The judge is the perfect representation of a nightmarish Kafkaesque character, whose procedural rigidity allows no room for basic humanity. 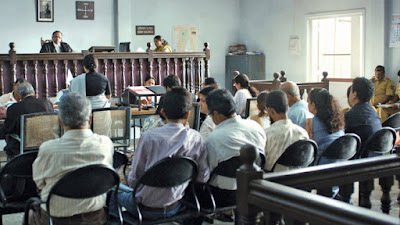 Even though the characters in “Court” are blissfully ignorant or painfully clueless of the ‘bigger picture’, director Chaitanya Tamhane has impeccably grasped this ‘bigger picture’ and elucidates it through static, long shots. In this formalistic approach, Tamhane’s dispassionate long shots (cinematography by Mrinal Desai) ask us to observe the whole frame, where the diverse people of India, withholding diverse ‘moral’ values, occupy it. Often, in the court scenes, we see characters pinned to their positions in a static shot to represent the stagnation of legal system. Tamhane flawlessly captures that lack of urgency in courtrooms, where any human emotion is dried out by incessant deferrals. Injustice lurks in each of those long shots (that takes place both inside or outside the court) and the numbed presence of human in those frames frightens us the most. Indian films dealing with societal injustice rarely capture people in their own emotionless milieu and allow the emotions to be naturally felt by audience. By not bringing his own anger, fiery commentary into the narrative, Tamhane is able to justify the character detours. With his cool, dissecting, subjective eye the director/writer imbues acute naturalism to the characters, whose interpretation of law & justice is shaped by their preconceptions. Tamhane also purposefully starts an action long before or extends long after the characters exit the frames to add extra layers to his pointed critique on out-dated traditions & laws (the most memorable moment is when the judge ruefully postpones a case since the woman complainant’s attire isn’t appropriate).

When legal process replaces humanity with dry, complex legal formulas then the whole judiciary process could itself be transformed into a punishment for those seeking freedom. Tamhane also notes how language plays a role in the courtroom. The laws, including the outdated, vicious ‘Dramatic Performances Act’, are inherited from British and they are in English. The majority of court people, except for defense attorney (he is a Gujarati) are all Maharashtrians and so they easily switch on to Marathi. The language of legal discourse is also something that’s not only baffles the accused, but even the attorney conducting the cases (like the bizarre ‘UAPA Amendment Act’ used to imprison Narayan Kamble). Finally, the greatest of absurdity in the court room lies in the manner the judge paraphrases the argument to the stenographer, typing the verbatim transcript. Even after hearing all sides of an argument, judge is able to twist the attorney’s words (mainly defense attorney’s) while paraphrasing it. Anyone who had observed a court procedure could find perfect truth in these sequences and for others it will be a shattering of illusion. One of my favorite sequences in the film happens towards the end, when the camera, fixed inside the courtroom, observes the humans packing out on the last working day before court’s summer vacation. Up until the point, the lights are turned off, screens closed, and doors locked to full darkness, the shot remains static, passing us the feeling of gazing into a bottomless void.

Tamhane and his crew not only took on the daunting task of shooting in real locations, but also selected a cast, compiled of untrained actors. The directors’ workmanship is evident in the manner he had extracted the performances. Tamhane shot only one scene at a day and sometimes a sequence took 30 -60 takes. It is a huge challenge, especially after considering many of the ‘no-cuts’ scenes. Many might have complaints about the way the shots are stretched out and also about the ending episode, but the level of mastery the 28 year old director, achieved in his debut feature astounds me. Those with a preoccupation about the narrative may find certain elements digressive, but it all fits nicely into his vision of inhumane bureaucracy. There were few accusations on Tamhane that he had adopted ‘European art-house film form’ to cater for Western audiences. It is a ridiculous comment which is being said back from the days of Satyajit Ray classics. In fact, the director’s refusal to simplify caste system or nuances in portraying the Gujarati, Marathi family could easily be grasped by Indian audiences rather than Western. It also would be futile to regard a particular film-form to be ‘Indian cinema’ since it is so diverse.

“Court” (115 minutes) is a multifaceted examination of the modern Indian society, where lives are being ebbed away by inane, arid societal divisions and onerous bureaucracy.  Stark, real social truths reverberate in each of the movie’s frames.