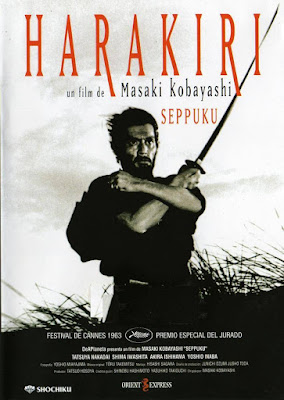 Why should one disapprove the rigid nature of an establishment or a system? Doesn’t that rigidity keeps people in line and allows justice be served? The question we need to ask back is: what kind of people become prey of this ‘rigidity’ and what kind of justice is served? When you seek answers for that question, you can come across the pompous and vacuous nature of an inflexible establishment. The argument for ‘rigidity’ or ‘justice’ is tossed around by the sentinels of the establishment, whenever their decisions have to circumvent basic humanity.  And, our history, most often, is not only written by victors, but also by humans who perceived fellow human tragedies through set of codes and intellectual reasoning. Great men of history have construed rituals and customs more often to advance their own ends and use it as a means to cut down any perceived menace. Japanese master Masaki Kobayashi’s “Harakiri" aka “Seppuku” (1962), set in 1630 feudal Japan, pointedly contemplates on this vile human nature, which I’d like to call as the ‘callousness of establishment’.


The movie opens with the arrival of impoverished and master-less samurai Hanshiro Tsugumo (Tatsuya Nakadai) to the domain of Iyi clan. He is seeking to commit the ritual suicide by disembowelment -- ‘Harakiri’ or ‘Seppuku’ -- in the clan’s courtyard. Tsugumo claims that the peace has unemployed him for years and rather than live like a dog, he prefers suicide by Bushido code. The clan chief Saito (Rentaro Mikuni) narrates a cautionary tale to Tsugumo, upon hearing his request. The tale concerns the fate of Chijiwa Motome (Akira Ishihama), a young samurai from a similar defunct clan, approached Iyi to commit harakiri. The clan’s advisors state Motome is simply trying to extort food or job by threatening ritual suicide. They are ashamed about how a samurai could trade in his unwavering honor for survival. Saito and his underlings of the clan get more enraged when they see the bamboo substitute for a samurai sword. The clan is determined to see Motome commit harakiri with the same bamboo sword or else to cut him down. Motome vainly appeals to Saito to postpone the ritual, but eventually in a brutal sequence he slowly pierces his bowels.

Tsugumo answers that he is a man of his word and would never waver from his decision. The preparations for the custom are made and the important clan members gather in the courtyard to witness it. Tsugumo requests fine swordsman Hikokuro Omodaka (Tetsuro Tanba) to be his ‘second’ – to deliver the mortal blow to head after the disembowelment act. Unfortunately, due to fatigue Omodaka has sought relief from his duties for 3 or 4 days. Tsugumo pleads Saito to bring the swordsman to finish this ritual. While men depart to solicit Omodaka, Tsugumo starts telling his own life story from the time his clan was abolished. He talks about the fate of his beautiful daughter Miho (Shima Iwashita), her husband and their sickly little child. The tale also reveals Tsugumo's reasons for choosing Iyi clan for performing 'Seppuku'.  His incisive looks, words, and actions exhibit the shame and hypocrisy of the clan’s unbending protocols.

By now, cinephiles might be aware of how ‘chanbara’ or ‘samurai' movies gained prominence in the post-World War II Japan (later influenced many Western films & film-makers) and how the great film-makers Akira Kurosawa and Masaki Kobayashi’s approach to this genre differed. Apart from exploring the darker, nether side of Bushido, Kobayashi’s exemplary works beautifully plays with the generic expectations of ‘samurai’ movie. “Harakiri” has astounding sword-fighting set-pieces, like any other great films belonging to the genre. But, what makes it a timeless classic lays in the way Mr. Kobayashi sets his priorities right. Right from the opening shot of the ‘sacred symbol of ancestors’, the film-maker adds narrative weight onto his character and finds enough room to mount the powerful social criticisms. Even when the real hacking and slashing commences, we don’t just see the protagonist outrunning his attackers, but also his fatigue and the sad realization of how one man (despite being a hero) couldn’t overcome a repressing establishment. Nevertheless, Kobayashi’s “Harakiri” heaps most of its damages on the villains through potent words. If we draw parallels to what happened in Japanese feudal era to any oppressive regime in a country, we can come to a conclusion that those empty governance will fall eventually. How? Because, however, majestic and powerful the establishment is, its foundation of hypocrisy & lies are like quick sands, waiting to topple everything. May be our history books on empires might say different things. Alas, history is truthful & real as people make it to be.

The precise directorial techniques of Kobayashi are a wonder to behold. Often the director impeccably establishes the geography for his tale, before bringing in the characters. In “Harakiri”, Kobayashi opens with the shots of clan’s neatly aligned structures. The camera movements, the framing plus the placid, lined surroundings indicate the ‘rigidness’ or the alleged ‘semblance of order’. The zoom-ins and camera pans are incredibly handled and showcase how one character’s relationship with another transforms within those physical, rigid borders. The framing of ‘ceremonial mat’ in the middle of courtyard indicates the empty adulation on the part of clan observers. Kobayashi amply employs high-angle and low-angle shots to demonstrate the hierarchy between Saito and Tsugumo. The elevated presence of Saito urges us to think upon his non-literal distance (or indifference) with Tsugumo’s plight. The black-and-white cinematography by Yoshio Miyajima weaves a sumptuous aesthetic that emphasizes on the spaces, characters finds themselves in and never tries to lighten up the figurative starkness.  My most favorite of the staging happens when Omodaka confronts Tsugumo at his cramped up hut. Tsugumo takes up Omodaka’s challenge to fight and they both slowly pass through a cemetery, a forest filled with dense bamboo trees, and a field in the mountain, rustling heavily under the wind. The sequence elegantly leads to a duel under the ominous, gloomy sky. Of course, one can’t forget the iconic, close-quarter sword fighting sequence in the climax. The way the swords slash, spear erupts and the walls come down with a brute force offers a visceral treat that’s hard to surpass by any modern action sequences.

Author Donald Richie claims the clan’s ancestor statue, cloaked in (red) armor suit as a metaphor for the false & empty nature of samurai code; its pomp and ceremony preached by rulers to the obedient menials. The statue is seen by Iyi clan as the representation of samurai honor, while a samurai’s blade is perceived as his soul. The uselessness of both the symbols is shown in a both figurative and literal manner. In the final fight, Tsugumo picks up the armored object and throws it, grasping its useless nature and with an intent to desecrate the object. But, despite the destruction of the sacred object, the clan members cover things up to retain an order, and with such an empty act they desecrate the very honor they wanted to uphold. Similarly, by clinging to his coveted sword, Tsugumo understands his own stupidity (but too late) for adhering to ‘figurative’ honor when he could have done a lot to save his family. These two different acts ruminate upon the same thing: on how rituals and ideas of honor become empty and ceremonious, when the much-needed humanity is taken away from it. The lack of humanity creates more fanatic individuals, interested in upholding honor rather than saving human lives. You can take this aspect of “Harakiri” and come up with many parallels in our own corners of society, where inflexibility and hierarchical nature prevails.


The script and dialogues writtten by Shinobu Hashimoto (wrote the script for Kurosawa’s “Rashomon”, “Ikiru”, etc) and Yasuhiko Takiguchi matches the ferocity and preciseness of the direction. The dialogues Tsugumo speaks to recall the fate of his daughter’s family gives us a hard time holding back the tears and at other times, they sharply blend in old Japanese sayings (“The suspicious mind conjures its own demons” – what an insightful line!).  Tatsuya Nakadai’s central performance as Tsugumo doubles the fierce strength of the film. He blends in the fury and tragedy when he narrates each word of his life story. His part exasperated, part sinister laughs (the laugh raises from the guts – the kind which frightens the enemy) and way he holds the sword like a bird ready to fly are some of the iconic Nakadai images. Rentaro Mikuni as Saito has also given a formidable performance, whose expressions exhibit hate and hidden shame in equal proportions.


It would be futile to perceive “Harakiri” aka “Seppuku” (133 minutes) as a samurai movie or as a simple morality tale. Masaki Kobayashi’s masterpiece indicts the perpetual human nature to compromise humanity for preserving hollow ideals.