Compulsion [1959] – An Absorbing Study of a Dark, Remorseless Deed 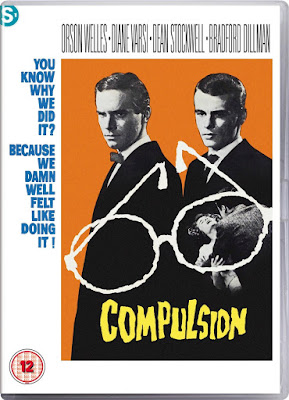 Our world is frightened by ‘evil’ kids. The word ‘juvenile delinquents’ is seen as a ponderous term to describe something dark and distressing. Part of the reason for why we and our media get intrigued by youngster committing soulless act is because it allegedly confirms our inner fears that the young generation is corrupted by the meaningless advances of nature. We the adults could easily embrace the idea that the current generation of teenagers are monsters, dallying with murderous intent. It’s not just us, but it’s what the previous generation (our parents) thought of us too. The 1924 case of Nathan Leopold and Richard Leob made the older generation of the era to think that the good world they have known is beginning to end. The vile social experiment done by 19 year old Leopold & Leob definitely make us cringe and coerces us to blame it all on the corrupt nature of modern teenagers. But, what we fail to contemplate is the inherent flawed layers of our society that perpetually breeds the indifference or twisted sense of superiority over the fellow human beings. By cursing the so-called modernity, the old generation tries to severe evil as an outside entity, having no connection with their society.

The 1924 was the era in America (before Great Depression) when illicit alcohol and rejoicing prosperity were the talking points. But, the meaningless crime of Leopold & Leob gave the American public and media to chew upon an outrageous act in a civilized society. The boy’s homosexuality, Jazz, booze and Nietzche’s ‘Ubermensch’ were brought under scrutiny to find concrete reason for the killing of a harmless 14 year old boy Robert Franks (newspaper called the case ‘crime of the century’). The murdering duo admitted that the killing was a social experiment to demonstrate their intellectual superiority, before being caught by carelessness. From Alfred Hitchcock’s “Rope” to Michael Haneke’s “Funny Games”, the Leopold & Leob case had a great influence in cinema. In 1956, Meyer Levin wrote a novel based on his personal knowledge of the case, which was adapted to screen by Richard Murphy and efficiently directed by Richard Fleischer (“Soylent Green”, “Boston Strangler”). And, although Fleischer’s “Compulsion” (1959) never proclaims that it is based on the 1924 murder case (the names of Leopold and Leob are changed to Judd Steiner and Arthur Strauss respectively), the narrative vividly follows the real-life events.

Of all Nietzche’s ideas, his concept of ‘Ubermensch’ (‘Superhuman’, explained in his book ‘Thus Spoke Zarathustra’) has received a lot of criticism as the embodiment of amorality. From the racial twist added by Nazis to the Superman’s archenemy ‘Lex Luthor’, Nietzche’s thoughts were often interpreted to call for the enslavement of weak and domination of intellectual superiors. Judd Steiner (Dean Stockwell) shows similar clumsiness in grasping the ‘Superhuman’ concept and revels in superior detachment. Judd is a talented a ornithologist, scion of rich Chicago family and a introvert with repressed rage. His odd, extroverted, wealthy friend Artie (Bradford Dillman) also believes in their superiority and he wants to take it further. They both are pursuing law studies in a reputed university. Despite the homoerotic overtones, the relationship between Judd and Artie doesn’t divulge the idea of romantic love. Artie wants to prove the idea of their superiority. And, so the due start with a petty crime of robbing fraternity houses. When Artie drives Judd’s car, he sees a gesticulating drunk in the middle of the road, he wants to commit a murder, just for the fun of doing and getting away from it.

Judd refuses to commit the murder, but Artie’s dominating mindset provokes Judd to prove his intellectually superiority theories. A little later, a 14 year old boy is brutally murdered. Judd and Artie’s fellow classmate (and budding reporter) Sid Brooks (Martin Milner) helps the police for positive identification of Kessler and Sid finds glasses along the body, which doesn’t belong to Kessler. It soon becomes clear that it was Judd, who had lost his glasses while disposing of the young boy’s corpse after kidnapping and killing him (with the help of Artie). It isn’t long before District Attorney Mr. Horn’s (E.G. Marshall) scrutinizing eyes falls on the young, rich boys with a water-tight alibi. Of course, Mr. Horn breaks through their intellect and in comes the famous lawyer Jonathan Wilk (Orson Welles) as defense attorney. While Wilk without ignoring the suffering of victim and the grieving family, puts on trial the furious demands of public, capital punishment and the legal system.


The narration of “Compulsion” is divided into three parts: the first concentrating on odd, symbiotic as well as envious friendship between Artie and Judd, while the second is designed as cat-and-mouse game between Attorney Horn and the two delinquents, and final part belongs to Wilk, who meditates upon the issue of capital punishment. But, the script handles all these transitions in a slightly impromptu manner that emotional impact for a viewer lessens with each part. Richard Brooks’ true crime masterpiece “In Cold Blood” (the movie’s seamless editing is unforgettable) faced a similar kind of challenge to portray events before the murder and the societal frenzy, legal proceedings post-murder. Due to strict production codes, back in the 1950’s, director Fleischer weren’t able to portray the gruesome reality experienced by Paul Kessler and there wasn’t also a chance to show the boy’s corpse. Martin Milner, who plays Sid, effectively enacts the emotional shock of seeing the corpse of brutally murdered boy, but when compared to the visceral impact of “In Cold Blood”, in relation to the murder of innocent family and the subsequent hanging of perpetrators, “Compulsion” remains less remarkable.  Apparently the engrossing, anti-capital punishment speech made by Wilks doesn’t disregard the suffering of Kessler and his family, but I think this film hasn’t made the leap to be the most powerful film it could have been. 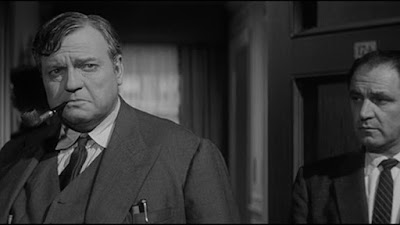 Director Richard Fleischer effectively stages the movie’s key sequences. Consider the scene, when Mr. Horn explains how the glasses could only belong to Judd. Mr. Horn places the glasses on a table, waits for Judd’s response and there Fleischer uses a static shot, where the passage of time is gracefully defined. Later, we learn in passing that Judd has agreed about losing the glass. Although, the sole presence of such shots is to save time, considering the lengthy procedure involved with the murder trial, it is established effectively. After Wilks delivering his emotional closing speech, district attorney Horn slowly rises from his seat, and waits until Wilks takes his seat. It’s a simple gesture of respect or commendation from one attorney to the other. “Compulsion” isn’t without the hints of melodrama, but director Fleischer for the most part restraints from loud emotions or childish gestures. Welles’ final monologue about the capital punishment doesn’t come off heavy-handed. He makes his points with a grace that’s missing nowadays in courtroom dramas (shouting and pounding fists have become a regular element). One of the important reasons to watch this film is to experience the acting performances of three leads. Stockwell, Dillman and Welles shared ‘Best Actor Award’ at the 1959 Cannes Film Festival, whose performances smooths out some of the irregular transitions in the script.

“Compulsion” (108 minutes) is an intriguing character study and social drama that ponders over a purposeless, malevolent crime. It isn’t extremely powerful like the other classics of ‘True Crime’, but a must watch for Welles fans and for those meditating upon the nature of evil.

at May 11, 2016
Email ThisBlogThis!Share to TwitterShare to FacebookShare to Pinterest
Labels: Based on True Story, Hollywood Movies, Social Drama