Omar -- The Venomous Tang of Occupation 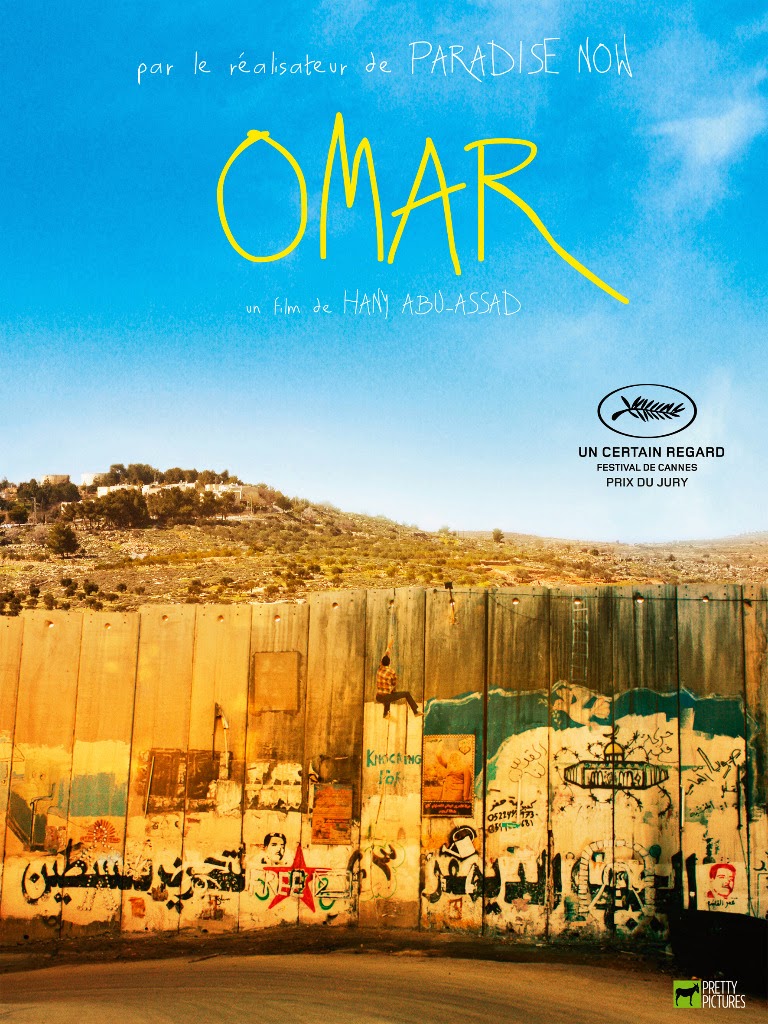 Trust is the best affiliation for mankind. Love and friendships are built on trust. We reveal our secrets to those whom we trust. But, what happens when this great virtue like trust gets mangled by a treacherous thing, say something like politics or radical belief. Then, it would cut a man so deep that everywhere he looks, he sees the beast called distrust. It boosters bad beliefs and feelings that continues for one’s life time. Omar in Hany Abu-Assad's “Omar” (2013) gets consumed by distrust; an impression conjured upon him by the dynamics of power.

Gillo Pontecorvo’s volatile classic “Battle of Algiers” explored why people suffering under occupation resort to terrorism. Abu-Assad’s 2005 controversial drama “Paradise Now” also explored those same themes. “Omar”, although not an unequivocal masterpiece like ‘Algiers’, tries to shine the light on a broader theme: psychological distress of men living in the oppressed conditions. The poster for ‘Omar’ makes us think that it is a romantic movie set amidst the border conflict. But, it is not correct. Like Iranian director Asghar Farhadi's movies, Abu-Assad leads us into layered truths and mistaken conclusions. It has an old-fashioned romance, but the atmosphere of paranoia, gives it a whole new dimension. 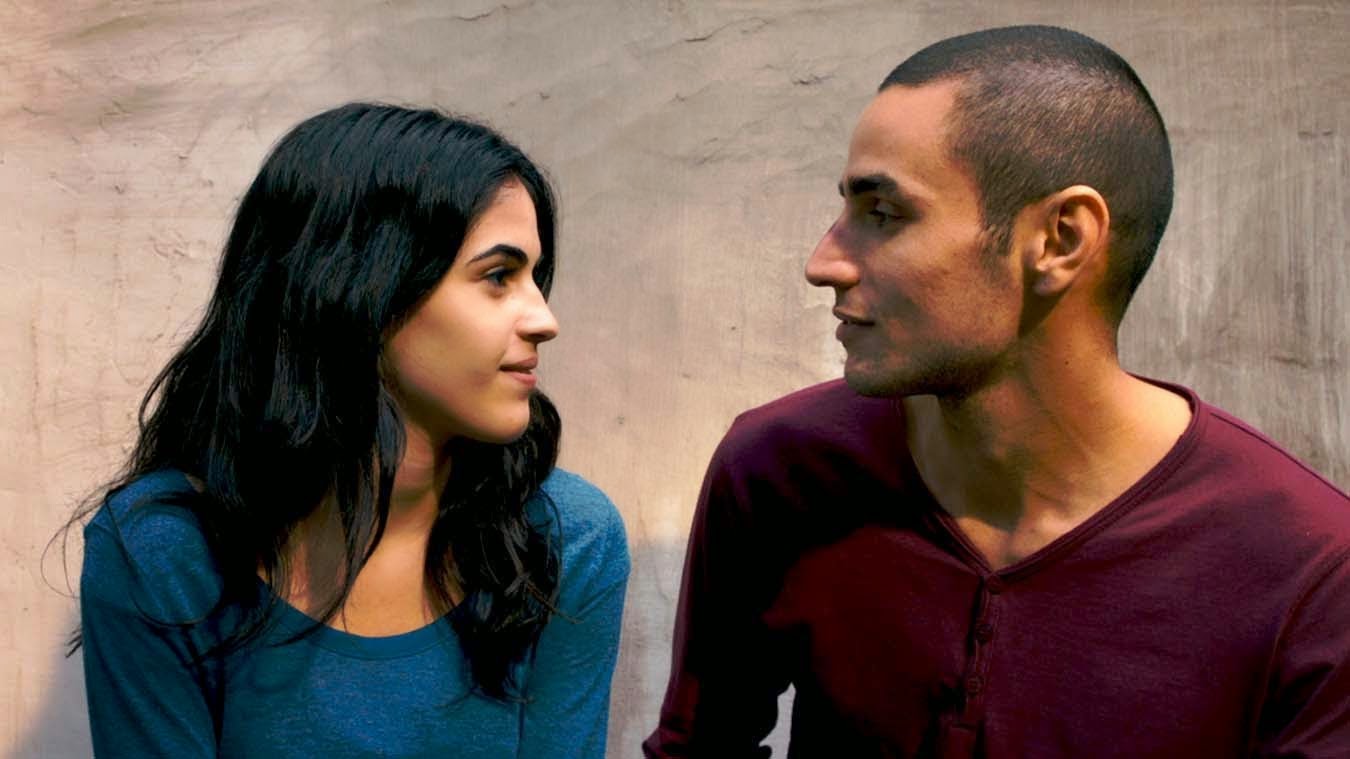 Omar (Adam Bakri) is a baker. He is a handsome young man earning decent wages. At the start of the film, he hops isolation wall, over the Israeli-occupied West Bank, outruns security forces and knocks on the door of his lover, Nadia (Leem Lubany). Nadia, the 17 year old girl, is the younger sister of his childhood friend Tarek (Eyad Hourani). Nadia too loves him. Tarek doesn’t know about Omar’s courtship and things get a little awkward when another childhood friend, Amjad (Samer Bisharat) loves Nadia. Amjad is just a funny guy who does a “Godfather” Marlon Brando impression. Omar and Nadia are talking about where they’ll have their honeymoon (Mozambique or Paris?). However, Tarek seems to have ties with Palestine militant organization. He vaguely talks about the oppression and politics.


One day, Omar is humiliated and beaten up by some Israeli soldiers, when he tries to cross the wall. Omar becomes a angry young man, commits himself to the Palestine rebellion by planning to kill an Israeli soldier. The plan succeeds and Amjad pulls the trigger. But, Omar soon gets arrested, hung naked, tortured to give up the names of his accomplices. He resists all their cruel methods, but falls prey, when he erroneously says to another prisoner "I'll never confess." The fellow prisoner turns out to be Rami (Waleed Zuaiter), a notorious Shin Bet agent. He gives Omar two choices: to live rest of his life in jail (faces 90 year in jail) or rat out Tarek to live with Nadia. He makes a rational decision. He is given a month to find Tarek. Rami doesn’t trust Omar, and Omar doubts that there is another informer among their organization. On the other hand, Tarek and his friends doubt that Omar’s a traitor. One manipulative doubt implanted by agent Rami spreads like a contagious disease and changes the fate of everyone involved. 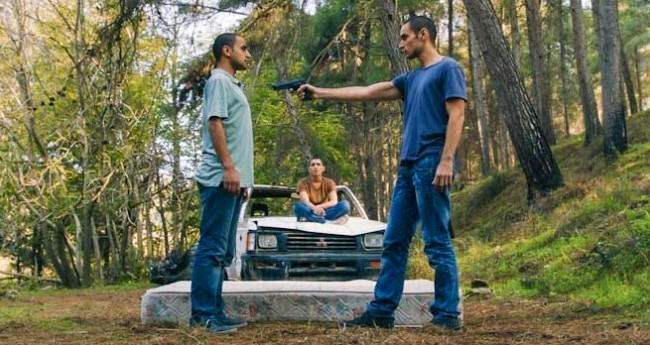 Various protestations were held against “Omar” by Jewish and Israeli groups, disputing that the film encourages anti-Semitism and such gruesome attacks, and that its Oscar nomination should be rescinded. I think there is little amount of politics in this film. It is mostly thriller set amidst a doomed romance and its violent acts don’t show blowing up a public bus. With little alteration, this same story could be set in Cold War Berlin or in any other country with border conflict. The film only depicts the corrosive nature of a poison (distrust) that oozes out of a radical and government agent. Last year’s eye-opening documentary “The Gatekeepers” showcased the interviews of former leaders of Shin Bet, Israel’s internal security service. If the political philosophy expressed in this documentary is found to be correct or normal, then I don’t think there is nothing controversial or wrong in “Omar.”

Abu-Assad’s “Paradise Now” portrayed two men, bereft of any options, turning into terrorism. That kind of character trajectory could be accused of being in support of such behavior. But, “Omar” shows no interest in terrorism or its causes. Abu-Assad just captures the everyday reality of living in West Bank and what are the psychological costs of such anxiety-filled life. On Tarek’s part, killing an Israeli soldier is great action for his cause. Omar is in on that plan because of the humiliation he suffered and for the love. He is just simple guy, who gets caught, manipulated and seems oblivious to the consequences of shooting a soldier. Whereas, Tarek repeatedly escapes from the Israeli traps because he is shrewder. The only time he loses his cool is because of some personal conflict. The contrast in characterization between Omar and Tarek could be seen as the difference between a commoner and extremist. When a powerful force like Rami gets in, relationships get reshaped by broken trust and betrayal. Amjad is just as devious as Rami, but the reason for his crookedness are more selfish. If Omar and Tarek are the ‘Good and the ‘Bad’, Amjad is the ‘Ugly.’


The character of Rami was also brilliantly handled. He doesn’t come off like a crude villain. In another context, the same guy could come off as a hero. Omar genuinely likes this guy, despite the contradictions. Beneath the coercion, Rami too exhibit a feeling of mutual respect, but their shared destiny in the end is totally unpredictable. The performances are top notch, especially by Bakri and Waleed Zuaiter. Bakri’s Omar strides through diverse emotional waters. The depth of his expressions gives the web of deceit, a real emotional weight.


“Omar” (95 minutes) points out to a harsher truth (a hopeless future). Abu-Assad shows the measure of true love and that love provides a strong political statement all its own.