The Wild Bunch -- The Aftermaths and Realities of Violence 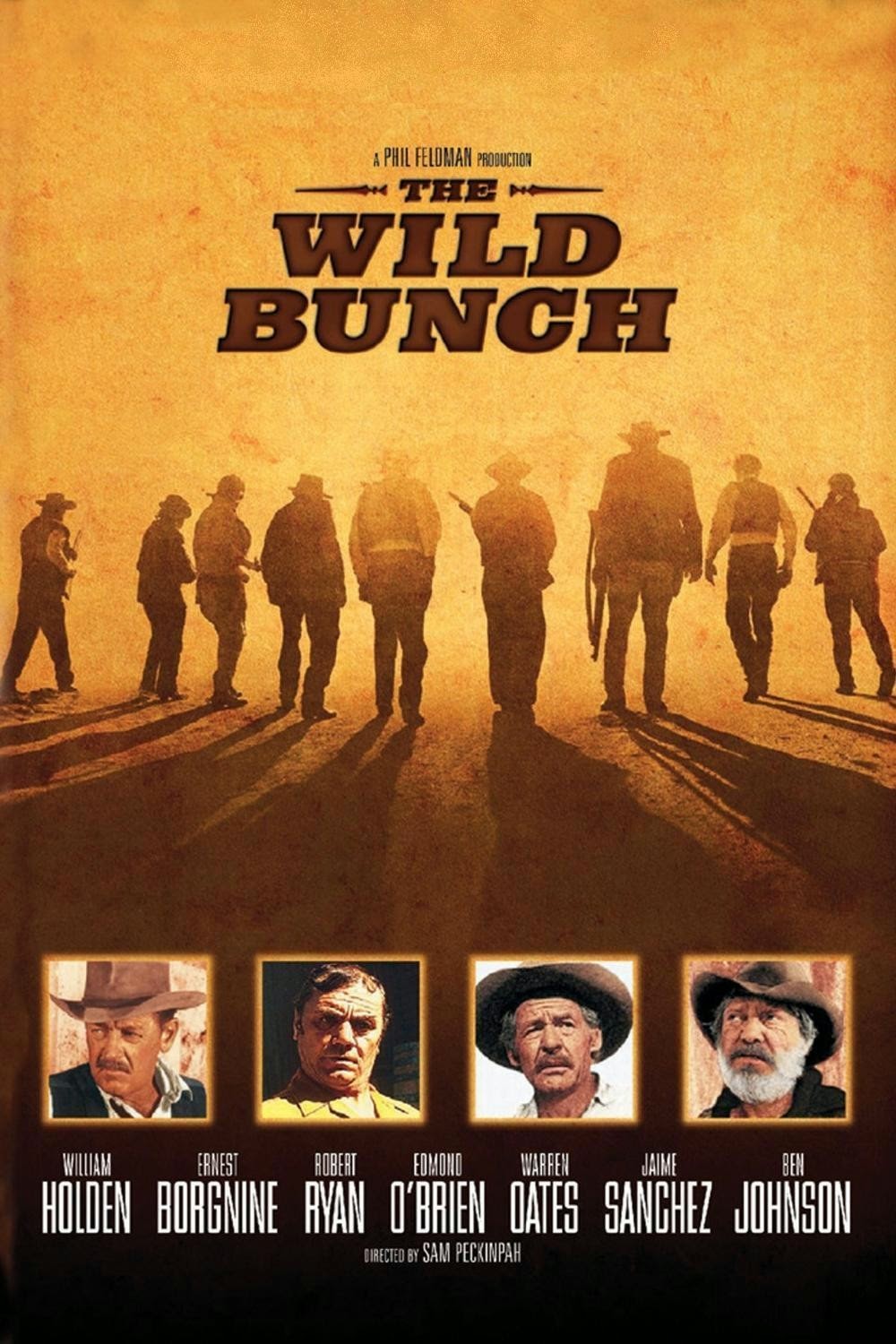 Most of the modern day, shoot-‘em-up action movies resemble the nihilistic comics. No complexity is shown in weaving the characterization of these violent men. Forty five years ago, when Sam Peckinpah’s violent epic “The Wild Bunch” released it caused quite a stir. It’s gritty, uncompromising style and the harsh depiction of Wild West made Motion Picture Association of America to slap the film with an NC- 17 rating (released later as “director’s cut”) and held up the film's re-release for many months. Sam Peckinpah, one of the greatest American directors, was always accused of romanticizing or glorifying violence. Although one can’t deny that fact, his movies are not just about getting people killed. He told intense tales of male bonding, where honor and loyalty remained as the changeless codes. In films like “Straw Dogs”, “Bring me the Head of Alfredo Garcia” and “Wild Bunch” he set out to demythologize the American hero figure. He has also influenced a generation of film-makers like John Woo, Quentin Tarantino etc.

Some of the critics perceived “The Wild Bunch” as a political allegory of America’s constant political intervention in political countries. Peckinpah said that, “I am just trying to tell a simple tale about bad men in changing times.” Allegory or not, this film turned violence into a haunting poetry and summed up the corruption of guilt in the Old West. The film is set in the year 1913, when US cautiously watched over from its border, while Pancho Villa (Mexican revolutionary leader) tormented the corrupt Mexican Government. It was also the era, when outlaw gangs were intently pursued by lawmen, and the Wild West got slowly tamed down by civilization. At this time, a gang of soldiers arrives at a small south Texas town of San Rafael. A group of grimy children giggle as they watch a scorpion being eaten alive by a colony of red ants. Amidst the soldier’s arrival, the bourgeoisie people of the town are holding a temperance meeting. The soldiers enter the railroad office, but suddenly start to rob the office of its cash receipts. 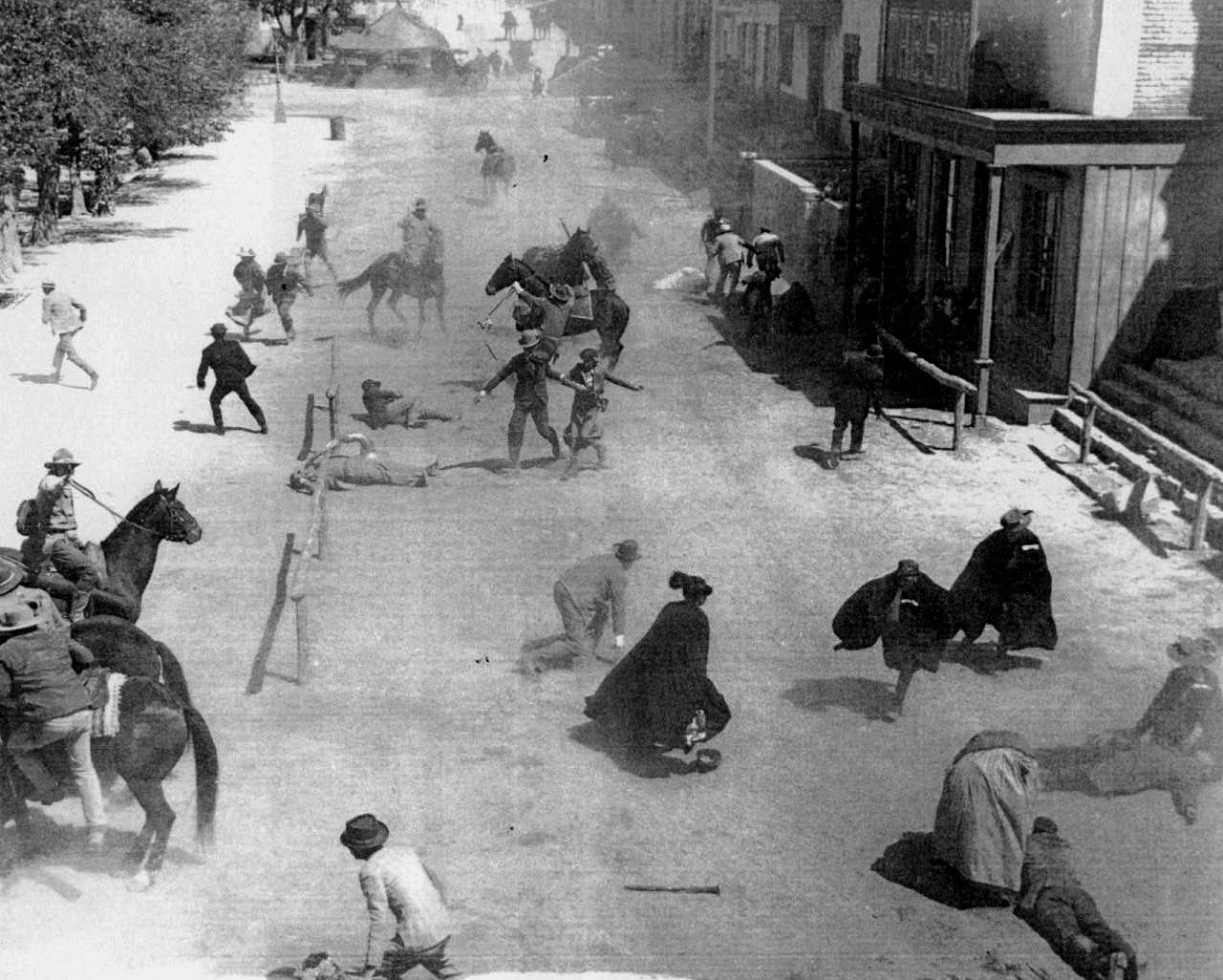 Pike Bishop (William Holden) is the leader of this group, an aged but ruthless leader. He and his men has planned this heist to little details (like the soldier attire), but what they don't know is that it's a setup. The money bags don’t have any coins and dozens of gun-toting bounty hunters and railroad men are hiding behind each of the building. In that same time, the townsmen start to parade down the street. What ensues is a bloody shootout, in which numerous innocent citizens are caught in the crossfire. After losing four men, the gang escapes the town with the bounty hunters hot on their trail. The failed attempt makes Pike to feel his age. Pike’s right-hand man is Dutch (Ernest Borgnine), another veteran outlaw.

Other members of the gang are Sykes (Edmond O'Brien), Angel (Jaime Sanchez), and the Gorch Brothers (Warren Oates and Ben Johnson). One important member and friend of Pike has gone missing: Thornton (Robert Ryan). Thornton was arrested because of a mistake made by Pike and now he seems to be commanding the mercenaries, who are hunting down his old buddies. Knowing that Thornton is on their trail, Pike plans for one last heist before retirement. They meet with a corrupt Mexican general (Emilio Fernandez) and his German allies. The general offers them a job: to rob a shipment guns the US army sends by railroad. Whether they rob the train or not, Pike knows that this job won’t end with them riding off in the sunset. 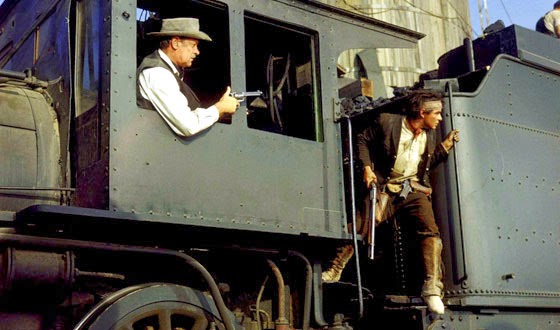 Sam Peckinpah and Walon Green’s script is interested in giving a mirthful account of chaos, corruption, and defeat. One of the important recurring themes is loyalty. The script observes the irony of maintaining a code of honor in an immoral world. Pike summarizes the theme in one scene, “When you side with a man, you stay with him.” The script also relates the violence surrounding the children. The eyes of children brim with a sadistic glee, as they pit red ants against scorpions, and finally set fire to all the combatants. It shows how the violence around them is slowly corrupting their souls. At the same time, this scene is also a metaphor for what’s going to happen to the outlaws in the end. The children in this film are not used as emblem of innocence. The children of Texas are curious onlookers of violence, but when the story travels to Mexico, we could see that the hardships of continual violence setting up a transition, which makes the kids from an observer to participant; they too start waving guns in the name of revolution.

“The Wild Bunch” could be just viewed as a great action movie. Multiple angles and quick cuts, body counts and edge-of-the-seat shootouts and other traditional elements of the genre is a testimony to its greatness. However, Peckinpah’s showcase of violence repulses a viewer rather than exhilarates – as in an action movie. Unlike in a John Woo movie, blood spilled here doesn’t makes us relish in enjoy; instead it makes us think. The shootouts portray the harsh reality that everyone is vulnerable, whether they are good guys or the bad guys, they are liable to die.

“The Wild Bunch” (145 minutes) revitalized the dying Western genre, launching some interesting films. Its dissection of violence remains thought provoking and horrifying rather than exalting.

Great review of an equally great film... enjoyed reading it almost as much as I had enjoyed watching the Peckinpah film. You also acutely touched upon the political allegories associated with the movie. Here, I would like to add that The Wild Bunch was deeply inspired by Leone's Dollars Trilogy. Had there been no Italian Spaghetti Westerns of Leone (Dollars Trilogy) and Corbucci (The Great Silence, Django), there surely wouldn't have been Peckinpah's The Wild Bunch.

@ Murtaza, Thank you. Yeah, Wild Bunch owes a lot to Leone. The main cast riding into town with frame frames naming the actors and then the chaos in the gunfight sequences are all akin to Leone's style.