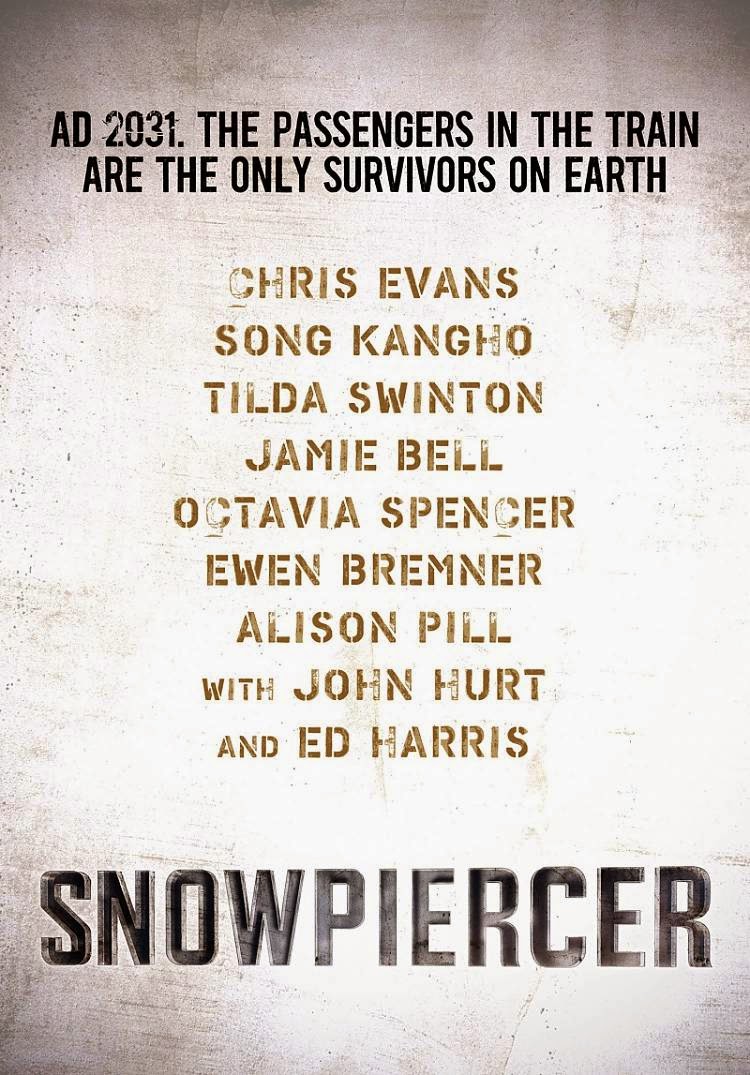 ‘All the World is a stage, and all the men and women are merely players’ – Shakespeare’s often cited line could be twisted a little to form the plot line for South Korean director Bong Joon-ho’s allegorical post-apocalyptic movie, “Snowpiercer” (2013): ‘World’s a train, and all the humans are merely passengers.’ Adapted from French cult graphic novel “Le Transperceneige”, ‘Snowpiercer’ marks the English language debut for gifted Korean genre director Bong Joon-ho (“Memories of Murder”, “The Host”, “Mother”) and inspired lot of talks about Harvey Weinstein’s unjustified demand for a 20 minute cut, in an effort to make it more palatable to western crowds. Slotted for an August release (in 2013), the film is finally going to be released in USA on June 24th (with cuts). There is no doubt that “Snowpiercer” poses a trickier marketing challenge: its final cut is too violent and dark for PG-13 rating; and, the film’s top-billed actor Chris Evans, outside his Captain America suit, hasn’t got much of crowd-pulling power. But, the studio’s attempt to dumb it down doesn’t make sense, since many recent, big-budgeted movies like “District 9”, “Life of Pi”, “Gravity” are all constantly expanding the boundaries of a genre, blending in both the art and blockbuster traits.

The events in “Snowpiercer” happen inside a train that travels through a frozen future landscape. How the world’s last remaining survivors ended up in this highly advanced train? We don’t know how, but the why is explained. In 2014, humans in order alleviate the growing threat of global warming launches a chemical substance CW7 into the atmosphere, which only inflicts a reverse reaction, turning every humans into frozen statues, except for the precious few, inside the train. Seventeen years later, in 2031, we see a bunch of grimy-faced have-nots, who are all scrabbling for food in the train’s tail section. The hundreds of tail-section people live a hellish life and are controlled by few gun-toting soldiers. They are fed a slimy-looking protein bar; children are forcibly attempted from the parents and any kind of insurrection s quelled by using cruel methods. Gilliam (John Hurt), the wise elder and Curtis (Chris Evans), a stoic rebel with a dark past are the unofficial leaders of these poor people. Curtis’ second-in command and side-kick is Edgar (Jamie Bell). 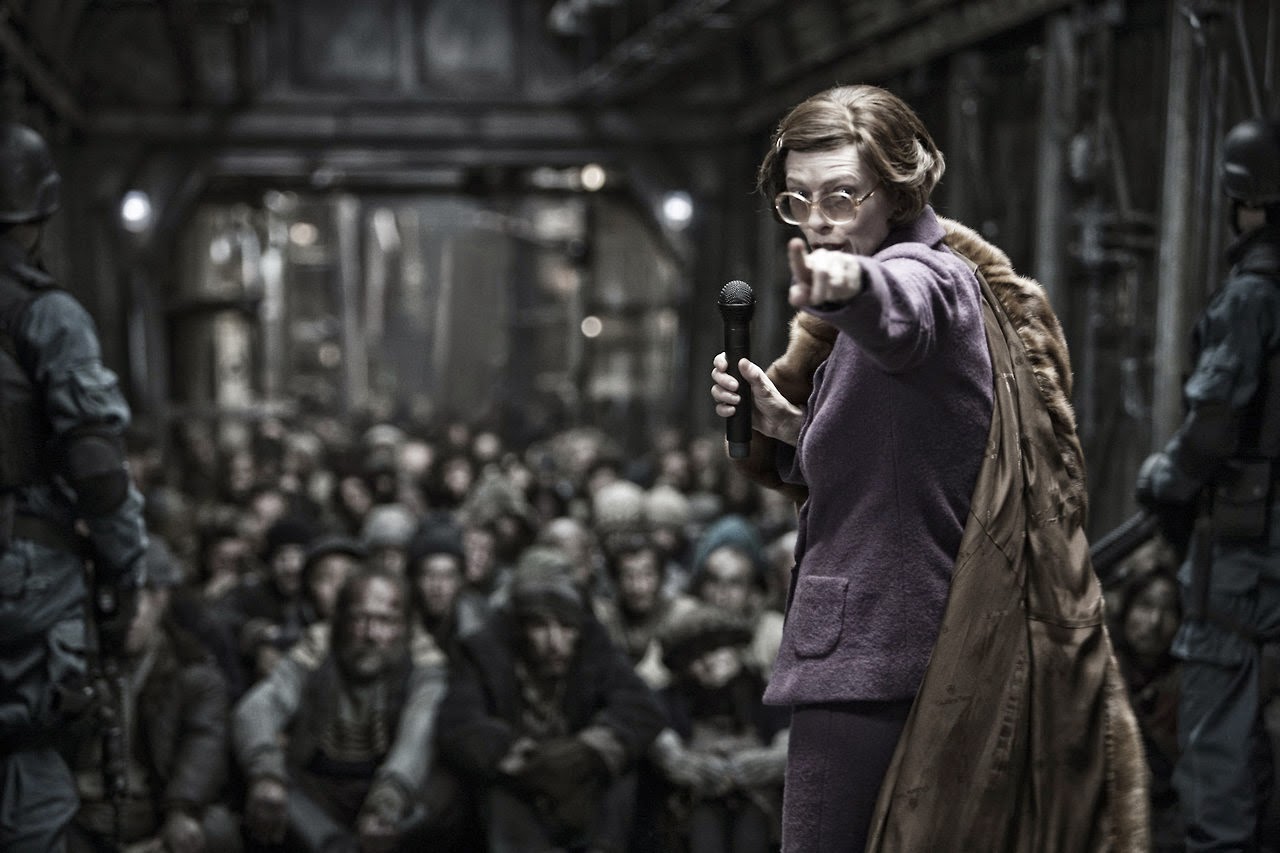 The three of them are planning for a rebellion to take control of the train and make it all the way to the perpetual-motion engine. The train with a self-sustainable sacred engine is invented by Wilford (Ed Harris) of Wilford Industries, who seems to be an old pal of Gilliam. Wilford’s second-in command is the fanatical speaker Minister Mason (Tilda Swinton). She and merciless enforcers cannot be easily defeated. The one good thing for the rebels is the cryptic messages they have been arriving from the front section, concealed in the gelatinous protein bars. The message asks them to free a Korean security expert, Namgoong Minsu (Song), from custody in the train’s prison car. 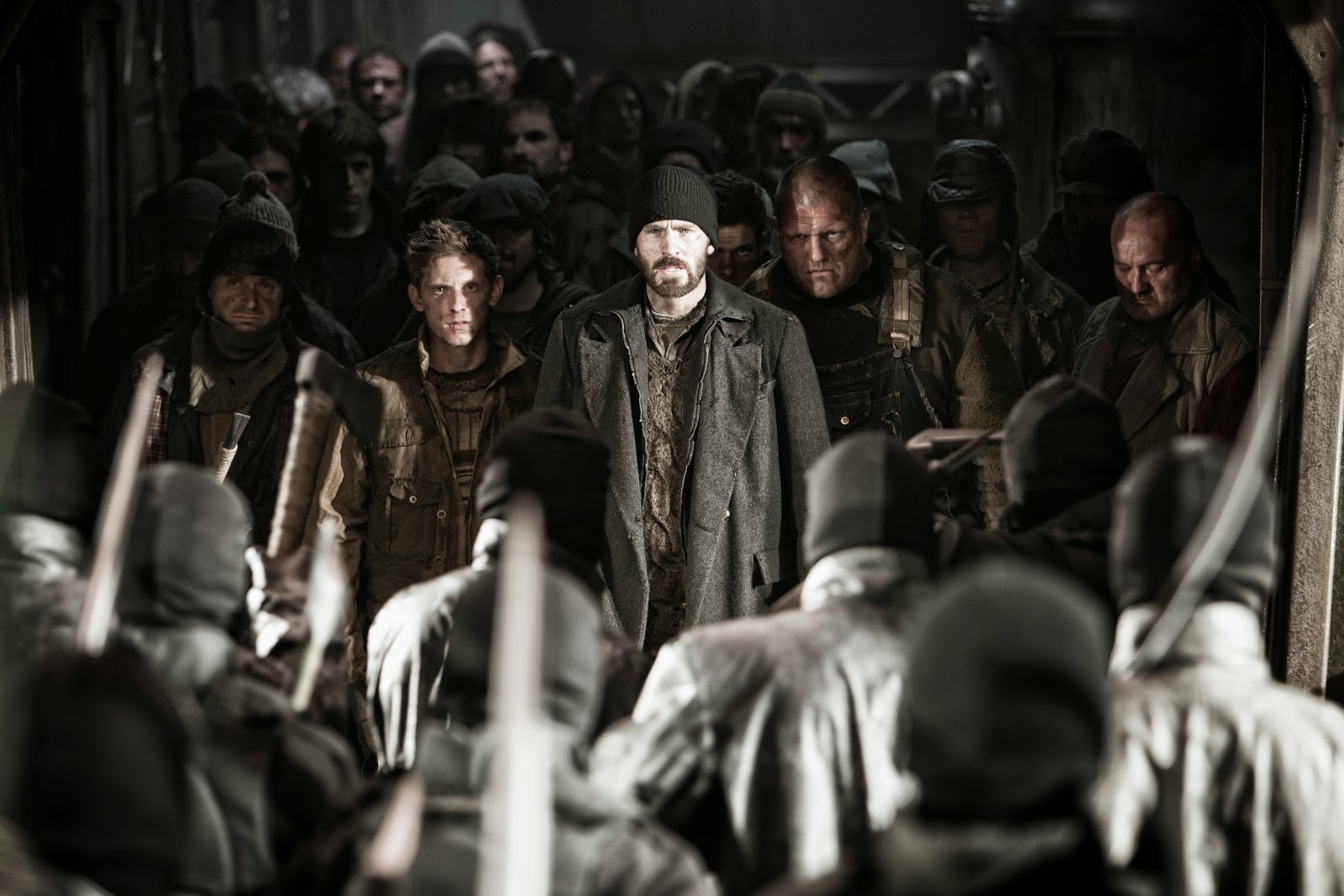 The downtrodden passengers push down their oppressors and free the security expert, to open all the doors ahead. Nam and his plucky 17 year old daughter, Yona (Ko Asung) tag along the group – their reward for opening each door is a fix of the hallucinogenic drug ‘Kronol.’ Later, the rebels clash with a group of axe-wielding men in a narrow place. If you think that the oppressed would push all the oppressors and then live a happy long life (as shown in “Elysium” or “In Time”), think again, because Joon-ho, to our delight conjures up both mayhem as well as political allegory. As Curtis & group advances through each compartment, we are introduced to a new, surprising facet of this eerie locomotive.

Director Bong’s proletariat revolt progresses, not just with bloody action, but also with a grand design, which puts us in the perspective of this international posse, who like us never knows what lies ahead of them. Each compartment is filled with decadent surroundings and the train’s blithe one-percenters seem to have been oblivious of their surroundings. The script written by Bong and Kelly Masterson (“Before the Devil Knows You’re Dead”) gives urgency to the plot where it needed (‘ax fight’) and also slows the pace to let us identify with the characters and be absorbed in their dystopian world. Each advance makes us feel that none of the character is safe in this tumultuous situation. 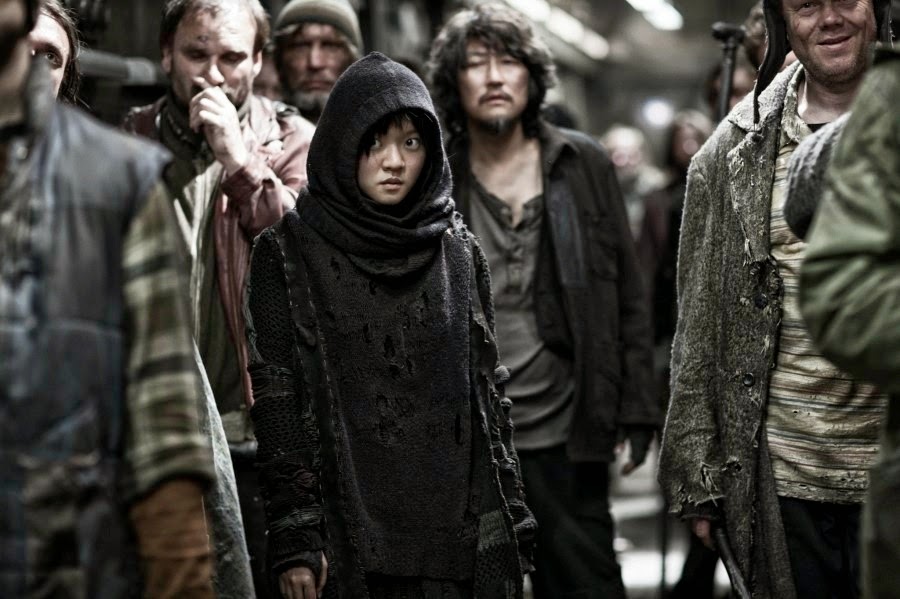 The characters are well fleshed out for good vs. evil tale. Curtis, at first looks like the typical malcontented Hollywood hero, but the character’s arc gets revealed in a specific moment which will make you rethink about Curtis. Nam and Yona’s characters do not come with the usual Hollywood label of ‘exotic Asian.’ Bong even makes Nam speak in Korean (hi-tech translator equipment translates it to English) and walks around in his own way, instead of cuddling up to his ‘white’ leader. Bong’s long time cinematographer and production designer Ondrej Neksavil brings up a remarkably rich setting, even though the film is restricted entirely within the train.

Chris Evans gives an electrifying performance as Curtis, especially that haunting monologue, which explains his efforts for being the good guy. However, two supporting performances stand tall: one is Tilda Swinton’s scene-chewing performance as the ultra-reactionary minister; and the other is Alison Pill’s morbidly cheerful school teacher role. John Hurt has been playing the role of shabby intellectual for decades (“1984”, “Midnight Express”) and so draws out our attention, whenever he is on the screen. The Romanian actor Vlad Ivanov is particularly menacing, without ever uttering a single line of dialogue. 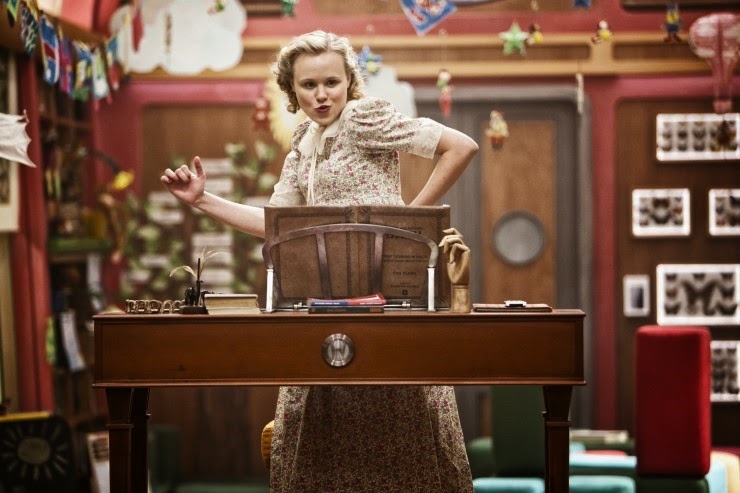 Flaws and holes are inherent part of this sci-fi tale (how the hell can the train run so fast and so long for 17 years?). Towards the end, Bong, repeatedly hammers the modus operandi of modern-day capitalism, which makes the political allegories, a little less layered. However, if we could over look some of the glaring flaws, our mind could provoke certain questions, which has been asked for long in dystopian movies: Whether mankind is worth trying to save at all? Does survival incites greater costs? And is it worthwhile to be inhuman for the better chance of preserving humanity? As I said, these questions has been asked a lot of times, but in ‘Snowpiercer’ we could genuinely feel the temptation in a character that facing a difficult decision, since none of the choices is going to be a easy one. The final choice or the event that made it happen could be viewed either as optimistic or pessimistic, depending on an individual’s view. I think only very few big-budgeted Hollywood movies have posed questions and have dealt action set pieces secondary to characterization. So, for these reasons alone, we could neglect the problematic aspects of the story.

“Snowpiercer” (125 minutes) is devilishly unpredictable and dazzles us ceaselessly. The unorthodox pacing, dark humor, violence and the film’s view on capitalist society may question its survival in the box-office; nevertheless this is an enthrallingly executed piece of allegorical sci-fi cinema.