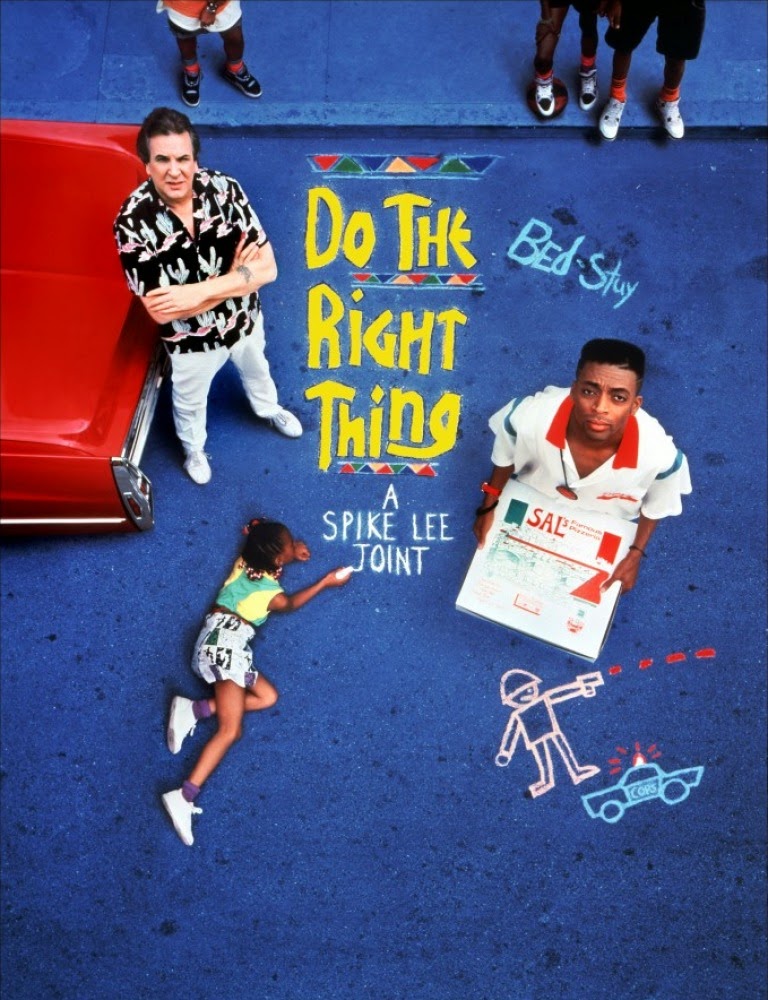 The true happenings in the aftermath of the Civil Rights Act of 1964 were well documented in many Hollywood movies. But, the racial divide or tension that existed and still does after the 1960’s was not given much thought by American film-makers. However, there were some exceptional films (for e.g., “Killer of Sheep”) about African-Americans, who were not stereotyped for entertainment purposes. Spike Lee, the quintessential African-American film-maker’s third movie, “Do the Right Thing” was one such towering achievement that takes look at the racial divide of urban American in the late 1980’s. Now twenty five years later, the movie hasn’t aged one bit, and still packs a punch. Lee did a rare thing by using cinema as a means for direct social commentary among his people, and he dealt with racial and societal issues, unlike many White directors.

The film chronicles the single day happenings in Brooklyn’s Bedford-Stuyvesant neighborhood. It starts with Senor Love Daddy (Samuel L.Jackson) – a local disc jockey – playing songs and providing commentary on the going-ins in the locality. It is one of the hottest days in summer. The protagonist of the story is Mookie (Spike Lee), an African-American pizza delivery guy, who works for Sal (Danny Aiello), an American-Italian. Sal, who runs his shop for 25 years, is happy about serving pizzas in a black neighborhood. Sal wants to get along with everyone and doesn’t show any of his racial prejudices. But, his sons – angry Pino (John Turturo) and dull-minded Vito (Richard Edson) aren’t thrilled to be working there. Pino can’t put up with the contemptuous comments of the local people and often calls them ‘animals’ or ‘niggers.’ Vito gets along with Mookie and doesn’t care about all these racial things. 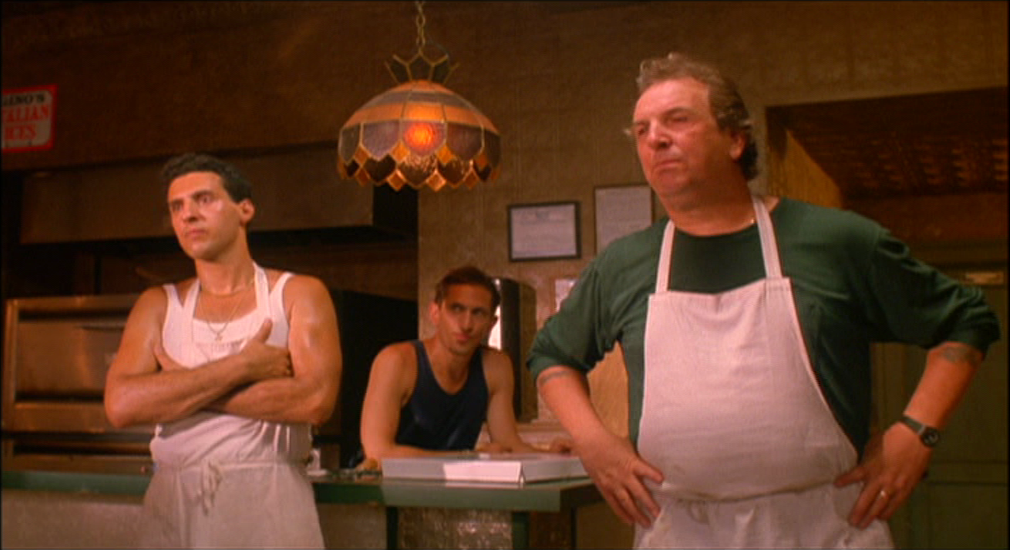 Mookie stays with his sister and can’t hold a job. He is also an irresponsible father, leaving his girlfriend Tina (Rosie Perez) and little boy to live with her mother. Sal often complains about Mookie’s ways of slowing the pizza delivery – he wears a Jackie Robinson shirt and gets busy with ‘brother talk.’ The other neighbors on the block are: the elderly statesman called ‘Da Mayor’ (Ossie Davis), an alcoholic but wise man; Mother Sister (Ruby Dee), who sits in front of her house and watch over the street all day long; Radio Raheem (Bill Nunn), who wanders the neighborhood with a ridiculously large and loud boom box; eccentric Buggin’ out (Giancarlo Esposito); and stuttering Smiley (Roger Guneveru Smith), selling photos of Malcolm X and Martin Luther King. 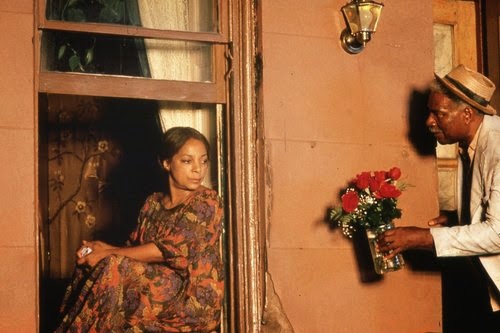 Also in the mix are the three jobless, middle-aged men named ML, Sweet Dick Willie and Coconut Sid. The trio talks about everything from politics to global warming and at the same time wonder, how the Koreans have managed set up a shop in their neighborhood. All the little racial provocations sour high, when the sun sets. Buggin’ points at the Sal’s Italian-American wall of fame and asks, “How come you got no brothers up on the wall here?” Buggin’ out -- the guy who takes offence out of everything -- sets off the climatic showdown against Sal. 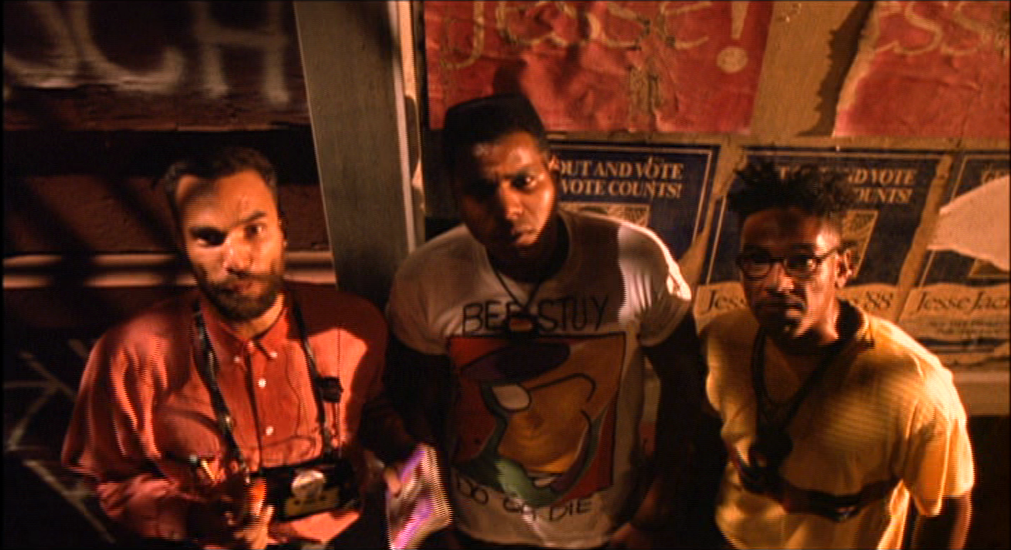 The film’s themes are volatile and political, but Spike Lee opts for some humor rather than making it a full-fledged serious drama. Lee uses the summer heat as one of the character. All the characters represent wide range of viewpoints within the African-American community: from the conciliatory (mayor) to reactionary young men (Buggin’ out). Lee doesn’t do the mistake of turning any character as an ‘all-bad’ one. Despite Sal’s outburst towards the end, we can feel sympathy for the man. Pino, who fiercely hates blacks seems to love African-American movie and sports stars. Through the three bums, Lee challenges the black community to get off from the somber mood and to create their own business opportunities.

Lee never tells us ‘what’s the right thing?’ or ‘who has done the right thing.’ It is great that he hasn’t given us any easy answers. Da Mayor in a casual exchange asks Mookie to ‘do the right thing.’ In the end, when riot ensues after the killing of Radio Raheem by law officers, Mookie throws a trash can on the window of Sal’s and as a result everyone follows suit. He has done the wrong thing, but was provoked by people, who are supposed to enforce the law. He wants to rise up against the injustice done against his friend, but the sad thing is, instead of rising against those responsible, he and his men have decided to rise against the closest white guy available. This scenario was simply explained by the slightly contradicting end quotes by Malcolm X and King. Both quotes says that violence is wrong, but Malcolm alludes that when you are wronged by the people who claim to be upholders of the law, then that law ceases to be law. Da Mayor is the only guy, who tries to defuse the situation, but he can’t instill common sense amidst the thuggery of Buggin’ Out. 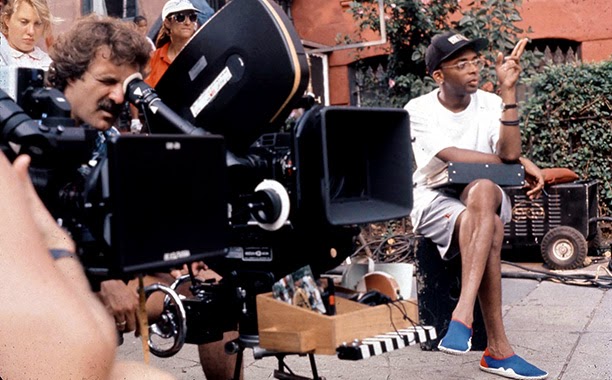 As an end note, there is an announcement from the government that they will conduct investigations on  property destruction. It taciturnly asks why should law must be focused on property and overlooks the murderous actions of police? Director Lee was criticized for leaving upon the drug problems on under-class black community. Lee said that adding the drug issue into this film would cloud the race issue. Besides, Lee has later dealt with the drug problems of the community in his movies, “Clockers” and “Jungle Fever.” The camerawork by Ernest Dickerson was outstanding, especially the impression he creates about the unrelenting heat. Spike Lee, intelligently, casts him as Mookie, since we would think that he was going to preach us about the right thing, but the character does exactly the opposite thing, underlining the fact that there is no heroism here.

Racism is one of the pervasive issues that exist throughout the world. The racial ills we encounter in Bedford-Stuy for two hours touches upon the hatred that is seething beneath the surface in cities or neighborhood across any country. “Do the Right Thing” tackles the prejudiced viewpoints with as much humanity and reality.