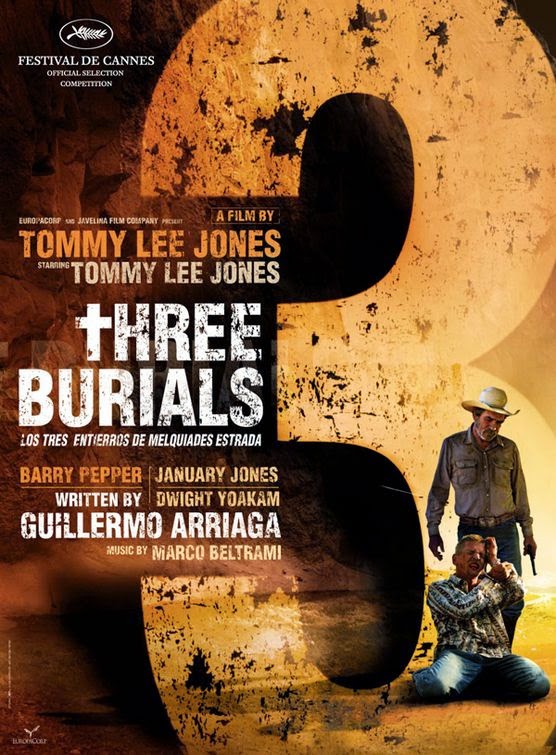 Guillermo Arriaga pens scripts like constructing puzzles, where each pieces are meticulously distributed out. At first they seem like unimportant particles attached to the air, but those resolutely intriguing passages slowly attaches to one another in their own time. This fragmented style –which was previously used in “Amores Perros”, “21 Grams” – was deployed in Tommy Lee Jones’s soulful directorial debut, “The Three Burials of Melquiades Estrada” (2005). The tag ‘modern Western’ just served as a framework to outstandingly explore the themes of friendship, loyalty, sex, forgiveness and death.  The film gained both acting and writing awards in the Cannes Film Festival. It might generate great interest among those, who have a penchant for less dramatic, darkly comic tales.

Maverick American film-maker Sam Peckinpah ventured to South of America in his movies, “The Wild Bunch”, “Bring me the Head of Alfredo Garcia”, and “Pat Garett & Billy the Kid.” Those films are about characters, namely old-timers, who value friendship and loyalty over other wealth. They stubbornly cling to these values, even though the path might lead them to an imminent death. The principle character in Tommy Jones’ “Three Burials” belongs to that era of old-timers, who in order to fulfill a promise, embarks upon a reckless journey. The film opens on a rugged landscape of Texas, where a corpse of a man is found half-buried out in the middle of nowhere. The buried man is later identified as Melquiades Estrada (Julio Cesar Cedillo), by his friend Pete Perkins (Tommy Jones), a ranch hand. Estrada seems to be an illegal immigrant, who has crossed the border to find a job to support the family. 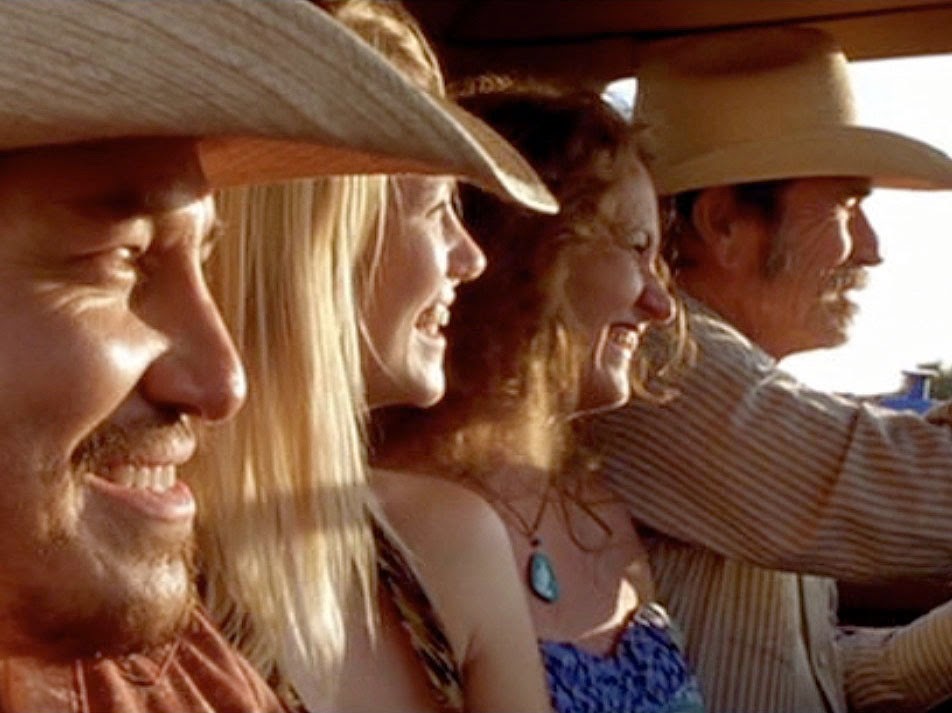 In the jumbled-up flashbacks, we see Estrada forging a strong bond with Perkins. Pete’s doesn’t have much of a human connection, except for Estrada and Rachel (Melissa Leo) – the waitress and wayward wife of local restaurant owner. Rachel also has an affair with local Sheriff Belmont (Dwight Yoakam). The death of Melquiades Estrada is accidental. The man, who was firing at a coyote, was mistakenly shot by a border patrolman Mike Norton (Barry Pepper). Through the flashbacks, we get to Norton, who is a hot-headed and quick-tempered guy. He has married his high-school sweetheart, Lou Ann (January Jones). The uncommonly gorgeous Lou Ann hates Norton’s sullen mood and gets bored with this small town, and spends her day in the vacant diner, staring at other tables.

Norton hides the body (burial no. 1) and the sleazy sheriff digs it out and buries it quickly (burial no.2) to stop any investigations on the killing of an illegal immigrant. But, Pete is not the guy who would leave his friend to rot in unmarked grave. He has promised earlier to Estrada that, he would bury in his home town and pass the news to his family. Taking Estrada’s family photo, Perkins kidnaps Mike and forces him to first dig up the body, hoists it on his horse and takes along Mike for a journey, beyond the river in a Mexican town called Jimenez (burial no.3). Norton’s fate hangs in balance, while he recognizes the stupidity and severity of his own horrible act.

Jones’ acute direction and Arriaga’s script gives the journey a full-bodied dimensionality. The traditional journey in Western film has always served as a metaphor for the divide between civilization and the wilderness, but in “Three Burials”, the journey is wholly meant for Norton’s redemption. The hot-tempered, self-possessed Norton disregards everyone but himself (his sex scene with wife, Lou Ann is the film’s most heart-breaking as well as bleakly funny scene), but in the end, he seems to be the weakest of the characters and truly begs for the forgiveness. So, in the end, it’s not just about three burials of Estrada, but also about the rebirth of Mike Norton. Arriaga also uses the narrative as a critique on American treatment of illegal immigrants.

Comic absurdity is rampantly spread throughout the scene: particularly, in the scene, when Pete’s attends to Melquiades’ rapidly deteriorating corpse, by partially burning it to kill the devouring ants and later gently brushes the corpse’ hair, which falls in clumps. One particular sequence conveyed the harsh realities of this landscape: not the snake bite, Norton endures; it contains the impactful cameo of Levon Helm (a 70’s rock legend), who plays the role of blind hermit. The visually challenged 70+ man has no one. His son might have died. All day, this old man only hears a Mexican radio station, not because he understands the language, but for the ecstatic voices. When Norton and Perkins arrive he gives them food and shelter, and later pleads to Pete to help him by end his life, since he finds suicide as ungodly act. This eloquent sequence will definitely stay with you. 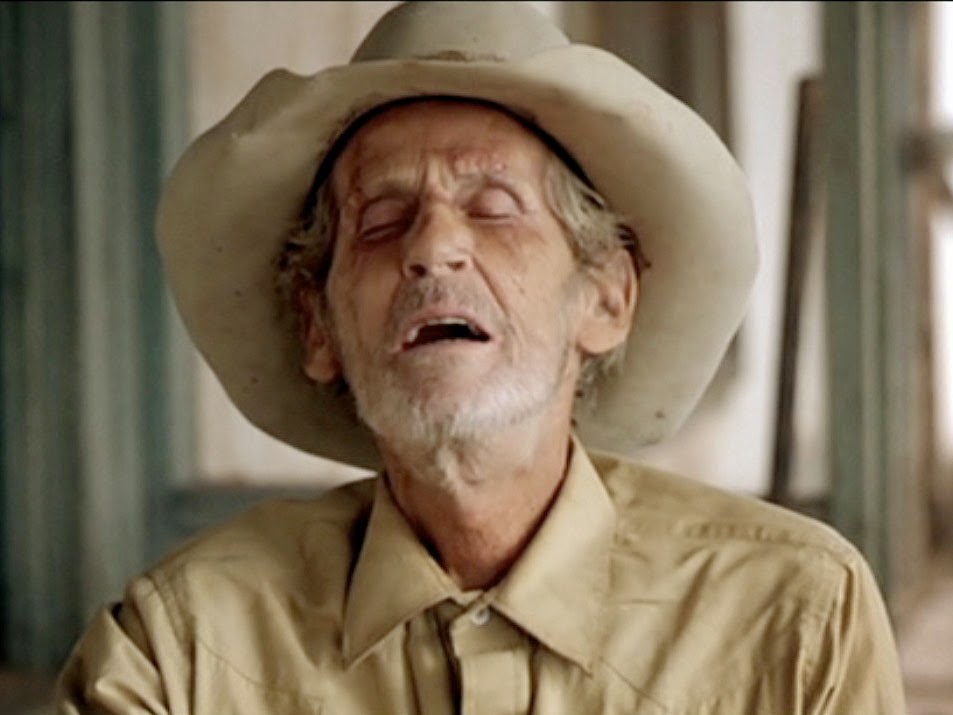 Chris Menges, the Oscar winning cinematographer gives an overtly epic feel while, at the same time concentrates on the characters and their dilemmas. The sun-baked, rocky mountainous terrain seems to be the expression for the character’s tortured inner lives. Although Jones’ style makes us remember the iconoclastic works of Peckinpah, John Huston, Budd Boetticher and John Sayles, he gives the movie, a life of its own beyond that of mere tribute. As an actor, Tommy Jones’ performance might seem simple and direct, but he always hides strong and complex emotions beating just beneath the surface, mainly to base the story in a definitive reality. Barry Pepper also turns in an exemplary performance as he tries to placate the mood swings of his erratic kidnapper.

“The Three Burials of Melquiades Estrada” keeps us intrigued till the last as we don’t have no idea of which direction it is heading. It is an unforgettable meditation on friendship, forgiveness and loyalty, and is bolstered by note-perfect performances.

I think your praising this film just sold me on it. It sounds good! Not something I'd usually watch, but I watch everything so it doesn't matter.