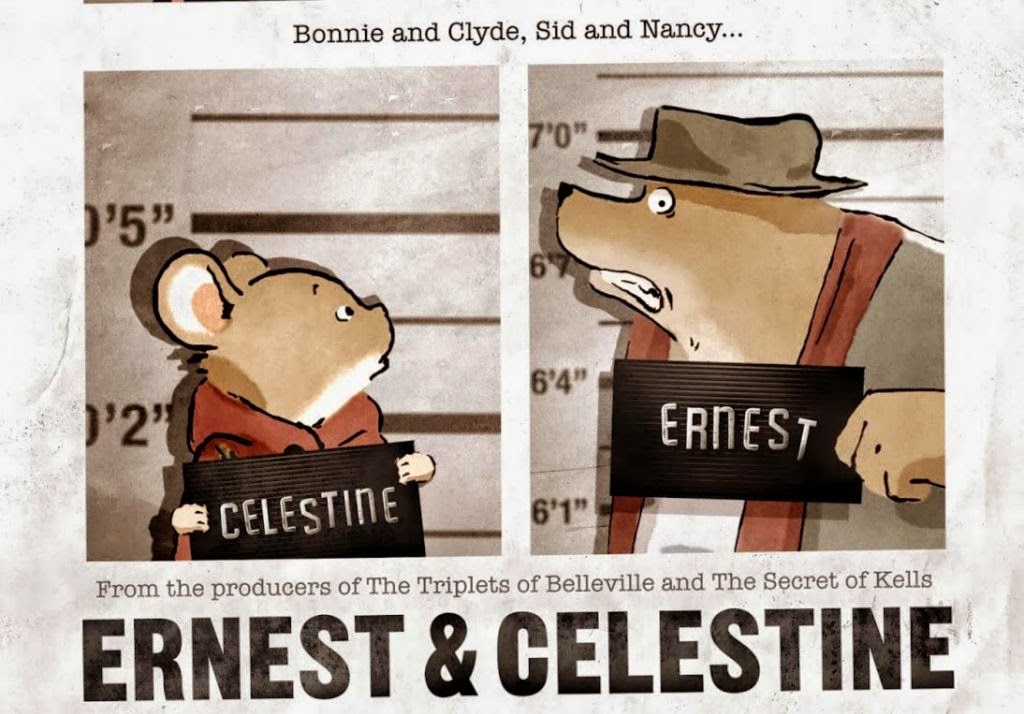 Computers have brought innumerable wonders to the animation movie genre, but every so often it’s nice to see a hand-drawn, traditionally animated film like the “Spirited Away” or “Triplets of Belville.” The delicately water colored French Belgian animated film “Ernest & Celestine” (2013) is one of those charming little story, without a blasting 3D or excessive CG. The young directors Stephane Aubier, Vincent Patar and Benjamin Renner have based their story on a long-running children book series, illustrated by Belgian author Gabrielle Vincent. The film tells a tale of unlikely friendship between a bear and a mouse.

Celestine is a young orphan mouse, who draws a crude childlike sketch of a bear and even dreams of befriending a bear. However, the whole mouse community uses a variety of scare tactics to avoid having any contacts with the bears. The mice lives underground, in the sewers and their economy is driven by bear teeth. Above ground, the bears tell stories to their children about how the mice are disease-ridden devourers.  Like Celestine, Ernest is the outcast of bear community. He is a bumbling and lonely bear, who is fined by police for performing in the streets.

Celestine, on one of her beer teeth collecting trip breaks into the house of George – a candy store owner, and his wife Lucienne – runs a teeth replacement store. Ernest comes across Celestine and first tries to gobble her up, but the mouse gives him an idea to break into the candy store. Later, the mouse helps Ernest to escape from the police. In return, the bear helps Celestine to steal the tooth from Lucienne’s story. But, when the bear steps into the sewers, carrying the tooth, the whole mouse community panics and outcasts the mouse girl. Similarly, Ernest is hunted by the bears for his run-ins with the law. These two, despite its different size and backgrounds, develop a relationship that's part father-daughter, part mentor-protege.

With its fearlessness and funny banter, Celestine is the most memorable character. Her character rises to the point that she dwarfs large sized characters. The film shows communities driven by fierce wealth-procuring schemes: a little bear whose father and mother own a candy store and tooth store – one business cause the teeth to fall out and the other provides replacement; the underground mice world has ruthless economic codes, often employing terror tactics. The both characters’ rejection of this normalcy remains as a main cause for this unconventional friendship. The directors have provided many memorable images, including the oppressive walls of the orphanage tower, mouse village, and the colorful display of spring season.

The message in “Ernest and Celestine” is simple and sweet-natured. It is surprisingly subdued and gives the kind of experience, which you’ll want to pass along. Like “Toy Story”, it will be loved by adults as much as children.

Seems to be a nice one. I am sure my son will like this !