Joe -- An Examination of Hardscrabble Existence 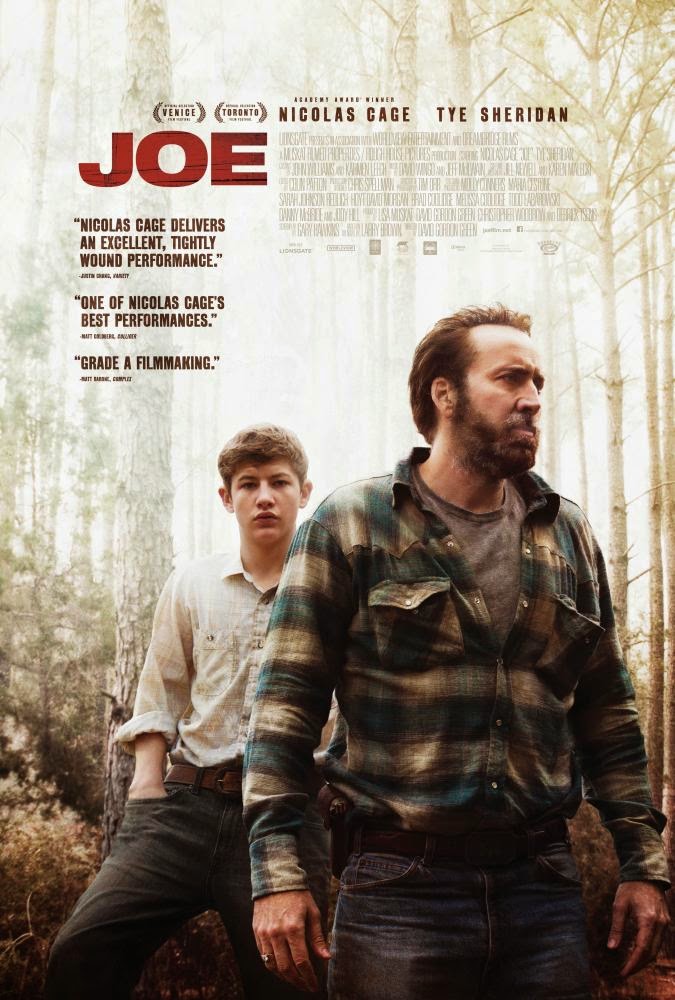 Nicolas Cage, one of the immensely talented Hollywood actors has been in on the joke for the past few years. With movies like “Drive Angry”, “Season of the Witch”, “Sorcerer’s Apprentice” and “Ghost Rider”, Cage has caged himself inside worthless, non-amusing projects. The first-rate actor of “Leaving Las Vegas”, “Adaptation” digressed himself into doing big-budget schlock. But, this strange detour has now come to an end with David Gordon Green’s “Joe” (2013). By playing the role of solitary ex-con, Cage has once again amply used his measure of dedication and talent. Director Green, following last years’ “Prince Avalanche” has stayed with his small-scale indie roots and has once again given us a dingy realist drama. Based upon 1991 novel by Larry Brown, “Joe” is about people who work in the dirt to lead a clean life.

The movie is set in rural Texas, where the land is filled with scrubs and wasted space. Joe (Nicolas Cage) is the hard-drinking, hot-tempered ex-con. He often visits a bordello and lives a solitary life. Approaching 50, he now runs a crew of African-Americans, whose is to poison the trees on land barons’ acreage. It is a dispiriting job as Joe himself mentions that poisoning trees is an illegal practice. Once the poison kills the tree, the lumber companies can waltz in and buy the land at a cheap price to plant more-profitable pines. Just like the mutt he has kept chained in the yard, Joe tries to put a lid on the rage, always seething inside him. But, despite his troubled past, Joe works alongside his employees and pays them fair.

Gangly teenage boy Gary Jones (Tye Sheridan) drifts along with his family and one day eagerly seeks work from Joe. Gary’s father, Wade (Gary Poulter) is an abusive alcoholic guy, who exhibits an aversion towards work of any kind. So, it is up to Gary to take care of his mute sister and muddled mother. Joe reaches up to Gary and sees a hard working, loyal boy. Gary sees Joe as a surrogate father figure. Joe is reluctant to be the boy’s role model, since violence and troubles always have a way of finding him. But, when he sees that every good deeds he had done to Gary is thwarted by the mad-drunkard Wade, Joe has no choice but to step up. 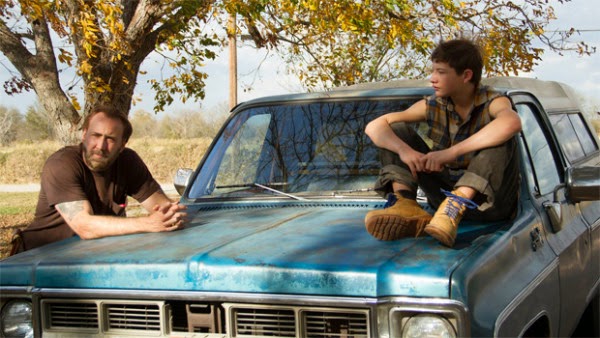 The story of “Joe” looks like a doppelganger for Jeff Nicols’ Southern-Gothic drama “Mud” (both films have Tye Sheridan playing an important role). Both the stories chronicles a boy’s coming of age and a middle-aged man’s redemption. They are finely etched out morality play; a detailed character study; and an elegiac journey. Green’s movie is the darker and bleaker of the two, because the titular character lives close to the society (unlike McConaughey in “Mud”), where violence seems more than a heartbeat away. Although, the primary villain here is Wade – who violently beats a homeless old man for a drink – the sense of evil seems to be brooding in every corner. The dark skies, ramshackle homes, poisoned trees, snarling dogs and toxic drinking are all part of this malign land where all kinds of hope seems to be snuffed out, except for few.

The camaraderie of the men on Joe’s crew; Joe’s protective feelings for the boy; Gary’s love for the family; and the sheriff’s gentle objections about Joe’s behavior are the exceptional few, which makes us think that the large brooding evil force can be kept at bay. Gary Hawkins’ script works very well in the bone-deep characterization of Joe. The relationship between Gary and Joe is deftly developed with the use of sensitivity and humor. Green’s restraint direction skill brings us into the small Texas town, perfectly capturing its inhabitants and their humid surroundings. 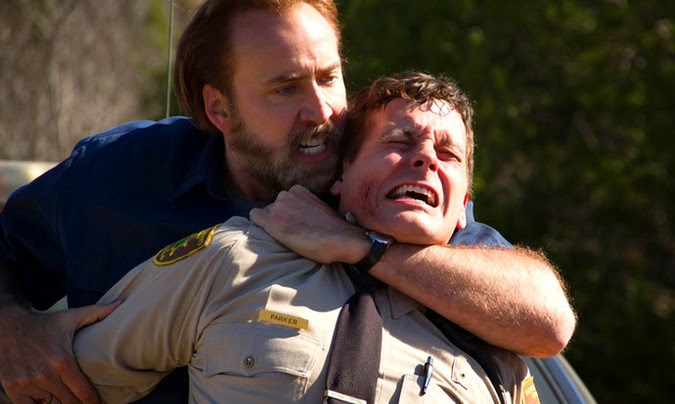 Nicolas Cage has previously played roles about guys with shady moral code, but in “Joe” he stays rooted to the ground. Even though, “Joe” is a trite character for movies, Cage makes us feel that we have known this guy very well. Few of his explosions – like outrunning a cop or making a furious pit stop at the whorehouse – keeps his performance in check and make the viewer genuinely unnerved. Gary Poulter, who plays Wade, was a real-life homeless man before getting recruited by a casting director. He has never acted in a movie, yet he not only brings a feral authenticity to the drunkard character but also a glimmer of submerged humanity. This performance could have easily given a career for Poulter, but unfortunately he died on the streets, a few months after shooting.

“Joe” (117 minutes) is a muted character drama that shows the self-inflicted hardships of men, living in dire circumstances. It is a soliloquy about a culture on the brink of collapse.

I have been told this is probably one of Cage's best performances in a long time. Is it true? I'm yet to watch the film

@ Haricharan, Yeah Nicolas Cage has chucked out all those foolish theatrics, we saw from him in the last decade, and has given authentic, soulful performance.