Beasts of No Nation – The Collective Nightmare of Cursed Children 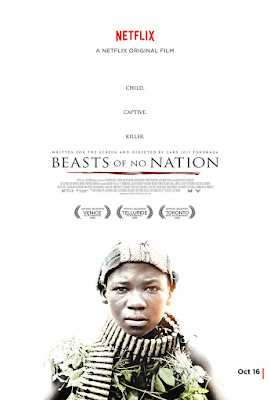 California born Japanese-American film-maker Cary Fukunaga’s “Beasts of No Nation” (2015) opens in some unnamed West African nation, the frames occupied by dilapidated shacks, military outposts and dirt roads, which sort of makes us think ‘oh, not another English language film about African civil wars!’ However, the West African milieu doesn’t cut to silhouette of a White American/British aid worker. We see a jubilant group of small boys walking with an old TV set frame and trying to sell it to people as ‘Imagination TV’. The boys humorously enact soap operas & reality-shows to the men seeing through the frame. An empathetic Nigerian soldier buys off the TV frame and gives away few food parcels to the boy named Agu (Abraham Attah). Later this imaginative boy goes through gruesome experiences that are beyond imagination – his as well as ours.

“Beasts of No Nation” is a film that raises lot of red flags on a movie buff’s mind: It is a film about West African child soldiers made by non-African film-maker; the movie’s cast includes the name of accomplish actor like ‘Idris Elba’; and it starts off with the voice-over of the boy protagonist saying, “Our country is at War”……….”I’m a good boy from a good family”. So the initial setting feels like a conceit. That it is going be another insensitive story about a war-torn African nation with some White savior hovering around an aid camp or UN premises. But, the film keeps on surprising the viewers in constructing an uncompromising nightmare, where the only White faces we see is that of UN workers inside a truck taking pictures of the gun-toting children and traveling in the opposite direction.

On a visceral level, “Beasts of No Nation” could be considered as one of the great works of the year, but its script, based on 2005 Uzodinma Iweala’s novel does get struck in a quagmire, where we feel that movie misses some specifics to become the truly memorable war movie. Fukunaga had maintained ambiguity regarding the backstory of the war to make it a more universal story about the plight of child soldiers. It is great that the writer & director have opted to showcase the broad emotional damage, endured by a child fighter, but I felt that the movie is devoid of a unique perspective to label it as ‘great’. The initial sequences are straightforward & simple as we are introduced about the endearing family of Agu.

The sun beautifully shines upon Agu as he has fun with his friends, despite the threat of a war. But since some agreement is broken and the military is about to enter Agu’s town, the elders decide to send away woman and children. The men are asked to stay for protecting their land. However, Agu’s father, brother and other townsmen are rounded up and shot to death. Agu runs into the bush to be found by a warring rebel faction, led by a paternalistic and inherently evil ‘Commanadant’ (Idris Elba). He takes in Agu to train him to be a warrior. And when Agu becomes a fighter he only sees and does more gruesome things. The prospect of getting reunited with mother only gets dimmer for Agu. The sun still shines upon Agu, and this brightness makes the blood shed more nauseating. The light in Agu’s eyes is eventually replaced with an emptiness experienced by a traumatized soldier.

In the middle part of “Beasts of No Nation”, a young boy calls Agu and gives him some brown-brown and a morale booster. Then, Agu’s consciousness gets disoriented as he steps through various bloody fields and sits among another session of Commandant’s lecture. The viewers are able to feel through Agu’s eyes how he loses the sense of time and place. A little later, the visuals itself begin to change color: plants and other surroundings takes on blood-red hue; sky and Earth are painted in sickly gray. Agu seems to have crossed a threshold point that needs some adjusting. Gradually, the color changes and Agu has survived the transformation, and now comes a bloodcurdling, fluid tracking-shot, where the by himself commits the atrocious acts. Such directorial and cinematographic flourish (Fukunaga is also the film’s DoP) is what makes the impact more gruesome and maintains the atmosphere of heightened tension. Some of the violent sequences do threaten to become too exploitative (like the scene where an engineering student’s bald head is cut down with a machete), but most of ‘horrors of war’ scenes imbues the traumatic experience.

By avoiding the details on who is attacking on whom or for why places the viewers in the same confused state as that of Agu. Director Fukunaga while maintaining a brilliant visual style in these sequence, never forgets to tap into the degrading sense of humanism. Fukunaga plays with light right from the start as the film opens in a sun drenched school ground. The recurrent visual motif of a bright sun always hovers around whenever Agu’s emotional state transforms for the worst. In a earlier scene, when Agu and his family is hiding in a dark room, sun shines through the bullet holes; when the panicked members of the room open the door, sun light drenches them as much as the bullets. Fukunaga’s repeated shots of sun could be equated to that of a silently observing God, while the brightly-lit fire (the fire of burned villages; or the heavy fire of artillery) seems to be an all-consuming dark force.

The story behind the conception and making of “Beasts of No Nation” itself seems to be a grim one. Fukunage has written the script for ‘Beasts’ along with his illegal immigrant drama “Sin Nombre”, but the lack of ‘white savior’ character and absence of Hollywood dramatics made studios to pass up the project. Even when the film moved to shooting stages, Fukunaga’s crew have experienced diseases, gone through bureaucratic blows (filmed in Ghana) and near-death experiences. Despite the hardships, the movie didn’t make much in the theaters, although it might reach wider audience base, thanks to the purchase by internet streaming media ‘Netflix’. As in “Sin Nombre” or the TV series “True Detective”, Fukunaga is at his best when he conveys the cult-like ceremonies or when he depicts chaos through those surrealistic tracking-shots. Apart from the stable, maneuvering shots (in the trench, mansion or when Commandant leads his minors’ battalion through the combat-ready streets), Fukunaga wonderfully conveys the movement of time through subtle shots (for example, the scene when Commandant waits in the lobby to meet Supreme Commander).

It is a bold decision to cast a well-known actor like Idris Elba in a significant role (one of the producers too). Elba starts by bringing out his usual brand of magnetic charisma and gradually transforms into a dreadful father figure and as a man blinded by power. Non-professional actor Abraham Attah’s entrenching performance reminds us of young Florya’s experiences in Elem Kilmov’s scathing Russian World War II movie “Come and See” (1985). Attah’s eyes convey how the light is extinguished from his life. The way he delivers those final words to Amy would make even veteran actors envious (“I am like old man and she's like small girl…….you will think that I am sort of beast or devil”).

Beasts of No Nation -- IMDb
at October 22, 2015
Email ThisBlogThis!Share to TwitterShare to FacebookShare to Pinterest
Labels: Hard-Hitting Movies, Social Drama