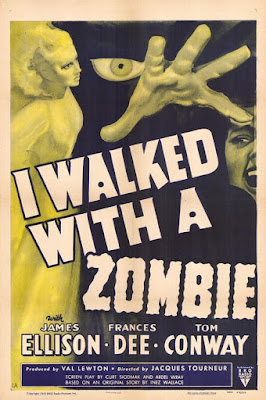 Between 1942 and 1946, RKO Pictures – one of the ‘Big Five Studios’ of Hollywood Golden Age – produced a string of horror films, whose story-line had the elements of a cheesy pulp fiction. Russian born American producer & screenwriter Val Lewton oversaw these productions (named as head of RKO’s horror unit) and each of the films were made within a budget of $150,000. The studio made sure that the films had a limited running time of 75 minutes or less. The studio-heads also provided the simple, inelegant titles. Lewton’s work is to concoct cheap chillers that turn up huge profits. Lewton immediately hired Jacques Tourneur as director and the duo made “Cat People” in 1942, which earned $4 million (made on budget of $134,000). The next year, the producer-director combination gave two more critical and commercial hits – “I Walked with a Zombie” & “Leopard Man”. Before Lewton was kicked out of the studio in 1946, he gave directing opportunities to Robert Wise (who in his long career directed classics like “West Side Story”, “The Day the Earth Stood Still”, “The Sound of Music”) and Mark Robson (who in his 45 year old career gave us films like “The Seventh Victim”, “Isle of the Dead”, “Von Ryan’s Express”, etc).

“Cat People” (1942) was hailed as one of the great minimalist horror flick (the movie is included in Roger Ebert’s “Great Films”), whose influence is said to have hovered over horror masterpieces like “Jaws”, “Alien”, etc. Tourneur’s “I Walked with a Zombie” (1943) might not have evoked the strong dreamlike power of its predecessor “Cat People”, but it is one of the most significant chillers of the era, which deftly used an ethereal & dark atmosphere as a horror element. Although the film credits Inez Wallace’s story (the script is credited to Curt Siodmak, although Lewton wrote final drafts for his films), it heavily borrows from Bronte’s ‘Jane Eyre’, Daphne du Maurier’ ‘Rebecca’ & Jean Rhys’ “Wide Sargasso Sea”. But these are just passing allusions, because at a 68 minute running time, the studio only wanted a cheap sensationalist visceral film rather than a deep exploration. “I Walked with a Zombie” is in many ways the B-movie it wants to be and it may seem too out-dated for the contemporary viewers, but this film has a lot of sensibilities & great atmosphere, which many of the modern CGI-riddled Hollywood movies lack. 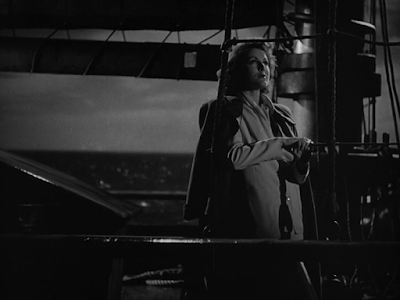 As I said earlier, Tourneur-Lewton didn’t have the time or money to make a staggering opening shot that dwells on the concept or mood of the film. So, they just jump into to the main plot, which is about a young & little naive Canadian nurse Betsy Connell (Frances Dee) accepting her job offer to take care of the wife of a plantation owner in the Caribbean islands. Later, as Betsy makes her trip on the boat, she ruminates on the calm sea, warm wind & on the effervescent sky. A voice cuts short her thoughts and states how putrescence & death hovers all over their surroundings. The voice, which belongs to Mr. Paul Holland (Tom Conway), the plantation owner, says “beauty of nature only serves to disguise death and decay”. May be Paul’s statement on beauty was really about his sick wife, whom Betsy had arrive to take care of. 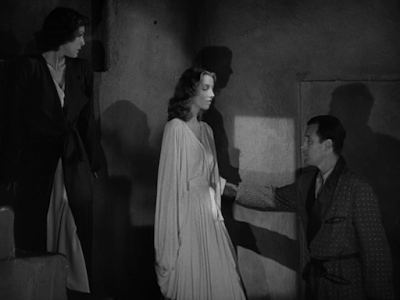 As Betsy travels to Paul’s house, from the ship, in a coach, she chats up with a native man, who says how his ancestors’ were brought to the islands, chained to the bottom of slave boats. The happy-go-lucky Betsy comments “They brought you to a beautiful place, didn’t they?”. Her naive statement was equally dismaying as Paul’s earlier one in the boat. Both these conversations happen within the movie’s first five minutes. The rest of the film is about how these two people figuratively meet at a mid-way point, casting off their respective unbridled darkness and nonsensical blitheness. Of course there is a significant plot element involving Jessica (Christine Gordon), Paul’s wife, whose ailment had turned her into a zombie (not the flesh-eating Romero version; she is just deprived of liveliness). Jessica’s ailment is pertained as an indirect consequence for her affair with Paul’s acerbated half-brother Wesley Rand (James Ellison). Betsy as usual falls for Paul and vows to restore his wife’s health (as an act of love) by seeking all means, including the local belief, voodoo. 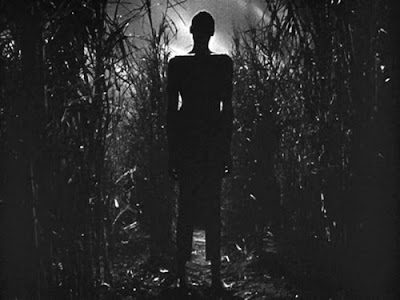 Director Jacques Tourneur’s elegant use of light and shadows reminds us of the German expressionist cinema (“The Cabinet of Dr. Caligari”, 1919). Most modern day directors insist on a perfect atmosphere to unfold the plot. Tourneur may not have had ample time to explore the distinct character traits, but he was one of the first Hollywood film-makers to use portray the thematic motifs through the deftly laid dark atmosphere. Unlike most of the Hollywood B-movies of the era, which included monsters, vampires or werewolves, Tourneur-Lewton’s works examined real-world fears – like the fear of unknown or some ancient ritual. So, the power of suggestion and the poetic sense of darkness bestow a great effect to the simple plot. One of the much talked about eerie sequence in “I Walked with a Zombie” was Jessica and Betsy’s walk through the sugarcane fields. Tourneur didn’t use any music for this sequence as we could only hear the wind rustling through the fields. Even the sudden, shocking appearance of the skeletal male figure seems to be a part of the mysterious atmosphere rather than jump-scare tactic. 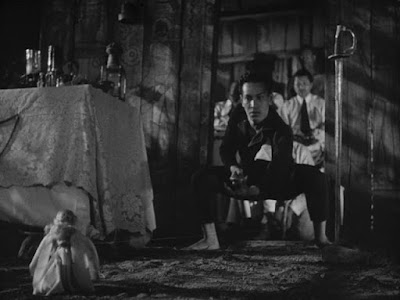 The character introductions are pretty much a stereotypical depiction, but the uncredited Lewton and Siodmak gradually stop these characters from becoming a caricature. There are enough dialogues to unmask a character’s naivety or their insincere attitude. There is no clear-cut protagonist or antagonist as every character (including Mrs. Rand) seems to have a lighter or darker side that opposes their external characteristics. There is also enough narrative ambiguity, especially towards the ending. Is Jessica’s ailment really a punishment of the ancient Gods? Did she face her fate as designed by the dancing voodoo priest or is it her lover’s decision to free her from pain and suffering? Such little obscure narrative elements are what make us to place ‘Zombie’ above other deplorable B-pictures of major Hollywood studios. Lewton & Tourneur must also be commended for their respectful portrayals of non-white characters (which is very rare in those times). The characters might condemn the locals’ rituals as archaic, but the narrative doesn’t pass a easy judgement and never shows the black-skinned people as the sole threatening force.


Despite its B-picture origins, “I Walked with a Zombie” (68 minutes) is a rare perceptive & atmospheric film of quiet horror. Modern horror audience may not find the film interesting, but it might provide an intriguing experience for a cinephile.


I Walked with a Zombie -- IMDb

I Walked with a Zombie : The Film Sufi
at October 16, 2015
Email ThisBlogThis!Share to TwitterShare to FacebookShare to Pinterest
Labels: Hollywood Movies, Horror