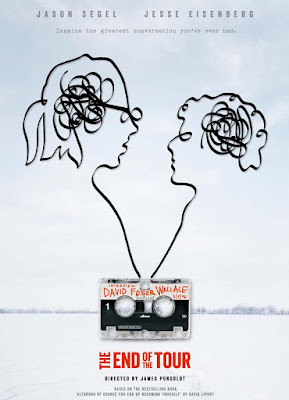 At an earlier point in James Ponsoldt’s probing character drama “The End of the Tour”, journalist David Lipsky states: “To Read David Foster Wallace was to feel your eyelids open”. Lipsky also describes Wallace’s legacy like this: “We think a thousand things at a time, and David found a way to get all that across in a way that's incredibly true and incredibly entertaining at the same time”. Those words would ring true if you ever start reading Wallace’s works. His immensely complex clauses and meticulous digressions remained inscrutable for me (I haven’t even finished his essay collections and so I think it would be futile to start reading his magnum opus “Infinite Jest”). But, Ponsoldt’s charming human drama urges me to delve more into Wallace’s stubbornly complex prose & mind.

“The End of the Tour” (2015) isn’t a biopic on the genius writer. It is more or less about two intellectual men forming a tentative connection and talking about their own insecurity & identity along with divergent themes like American celebrity culture, pop consumerism, artist’s dilemma, etc. Despite the lengthy conversations, the script (written by Donald Marguiles based on Lipsky’s 2010 memoir “Although of Course You End Up Becoming Yourself”) handles the themes deftly, making us to forge an emotional connection. The movie was based on Rolling Stone journalist Lipsky’s five-day road trip (back in 1996) with David Wallace, who is about to end his publicity tour for “Infinite Jest”. The film starts on 2008 as David Lipsky pulls out a cassette tape of his interview his Wallace after hearing the news about Wallace’s suicide. Then, the narrative jumps 12 years back to offer small fragments of David Lipsky (Jesse Eisenberg), an ambitious New York intellectual, who has recently published his not-much heralded debut novel “The Art Fair” (in real life, however, ‘Art Fair’ is said to have made into Time Magazine’s “Best Books” for the year).

Lipsky hears about the arrival of a great modern American writer named David Wallace (compared with the likes of Scott Fitzgerald, Salinger, and Hemingway) in his social circle. He immediately picks up “Infinite Jest” and when he is little into the book, Lipsky, the journalist, gets an idea to write a lengthy piece on the author, who is at the peak of his fame. The 30 year old Lipsky persuades his editor about the idea, since Rolling Stone has never written pieces on writers, and then travels to icy mid-western state Illinois to meet the secluded, socially awkward, bandanna-wearing, dog-loving literary legend (played by Jason Segel). Wallace initially seems little reticent and Lipsky does nothing to break the ice as he immediately puts forth a recorder. Nevertheless, the two men gradually start to exchange their perceptions over smoking, junk foods, TV shows, rock-star Alanis Morissette, lack of meaningful relationship, technology, self-doubt, etc. Lipsky also accompanies Wallace to Minneapolis for the publicity tour and witnesses the palpably human side of the author. 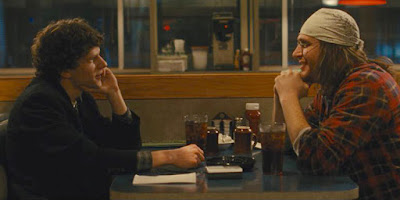 “The End of the Tour” pretty much happens in an era, where technological advances haven’t fully consumed our attention. The lack of highly sophisticated gadgets, the presence of cassette tapes and real books makes the conversations riveting (because now it would seem hard for intellectuals to make a lengthy conversation without ever looking at their mobile screen). Although the events took place just a couple of decades before, the narrative feels like throwback to a wholly different world. Director Ponsoldt and writer Marguiles haven’t also turned the film into mind-wrestling game. Despite the array of contemplative questions, the script also departs to showcase the authors’ vulnerability and ironical behavior (‘Mall of America’ sequence was well conceived without becoming self-parody).  Ponsoldt and Marguiles also hint at the bond between two men, regardless of their contradictory ideas, but this alleged bond isn’t used to give us a gooey closure (I liked that little anxious moment towards the end where Lipsky tries to hug Wallace, while Wallace remains content with the handshake).

I don’t know much about Wallace’s personal life or haven’t watched his interviews, but still “The End of the Tour” doesn’t come across as a profound account on Wallace. It is mostly Lipsky’s subjective account on Wallace. We also equally learn about the insecurities of Lipsky. We can relate to Lipsky’s experience with Wallace since the movie makes us to think how we would react & feel when we meet our own idols. Lipsky admires as well as envies Wallace (by measuring his success against the genius writer) the same we would when we meet a renowned personality. Wallace is sometimes what Lipsky wants him to be, while at other times incredibly complicated. The conversations also become more interesting since Lipsky is there with a preconceived agenda. Ponsoldt perfectly brings in all these dilemmas and self-awareness into the narrative. The movie also weaves a wonderful message on how our restless pop-culture urges people to move toward simple-mindedness (“the technology’s just gonna get better and better and it’s just going to get easier and easier and more and more convenient and more and more pleasurable to sit alone, with images on a screen given to us by people who do not love us but want our money. And that’s fine, in low doses. But if it’s the basic main staple of your diet, you’re going to die. In a very meaningful way, you’re going to die”). 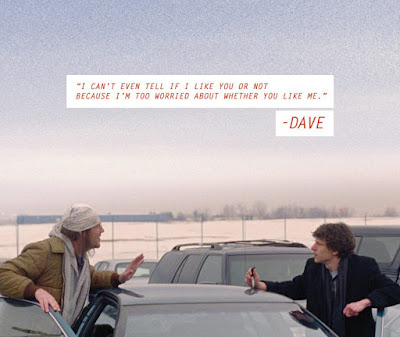 James Ponsoldt, who has previously directed two spectacular character-driven movies (“Smashed”, “Spectacular Now”), is a huge Wallace fan and so he brings out the humanistic as well as the intelligence side with deftness. It is also nice to see the director not wallowing over the cliches of showcasing the authors’ process of writing or his drinking habits. Jason Segel is excellent as Wallace (this is his most true and breakout performance) as he immensely helps the film to reach its dramatic peaks. Segel has brought the emotional power to the complicated writer, who is trying to give voice to his inner doubts. The perpetual restlessness, media addiction and wise remarks of the author are disclosed with intimate detail.


“The End of the Tour” (106 minutes) is a reflective and engrossing conversational drama which might join the ranks of “My Dinner with Andre”, “Mind Walk” or the “Before Trilogy”. The movie inspires us to tackle David Wallace’s books.

The End of the Tour -- IMDb
at October 29, 2015
Email ThisBlogThis!Share to TwitterShare to FacebookShare to Pinterest
Labels: American Indie Films