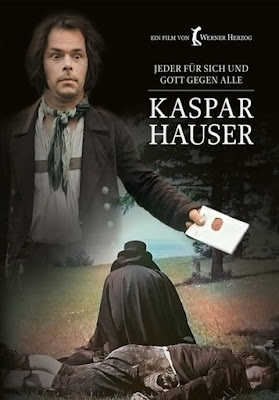 Kaspar Hauser is one of the most debated individual, whose name immediately provokes both exaggerated accolades and ridicules. This wild-child (alleged) of Germany has inspired a lot of literary works (including many non-fiction works) and a number of documentaries & films. Modern pioneers of medical field are still trying to figure out the origins of Kaspar, while historians have fervently worked in trying to prove or disprove Kaspar’s stories. German auteur film-maker Werner Herzog’s 1974 quasi-biographical film on Kaspar Hauser titled “Jeder fur sich und Gott gogen alle” (in English it means, “Every Man for Himself and God against All”) doesn’t try to unfurl the facts about the wild-child or boy, but it mostly works as a heartrending examination on human nature. The movie was of course known by its international title “The Enigma of Kaspar Hauser” and despite the cynical nature of the original German title, the film encapsulates diverse subject matters and proves to be tricky to categorize.

Herzog’s story inherently believes in Hauser’s alleged origins and mostly omits the viewpoint of Kaspar’s detractors. The director instead offers a profoundly moving account of a society’s failure in recognizing a man for what he is. As usual, Herzog amalgamates his own brand of nihilism with dark humor. Although the film is about human absurdity and the ambiguity of emotions, Herzog imbues images of nature’s overpowering beauty and astoundingly captivates human innocence that stops us from using the words ‘distressing’ or ‘dark’. Addressed by critics as ‘Expressionist Biographical film’, “The Enigma of Kaspar Hauser” commences with the beautiful images of a hazed over man in rowboat, a glowing face of a woman, an ominous tower and a elderly woman rubbing clothes against a washboard. A quavered music plays in the background as a foreword chronicles the appearance of mysterious Kaspar Hauser in a Nuremberg Town Square, in 1828 Germany. The foreword is cut to an awe-inspiring static shot of a windy grain field and a meditative question appears on screen “Don’t you hear that horrible screaming around you? That screaming, men call silence”. 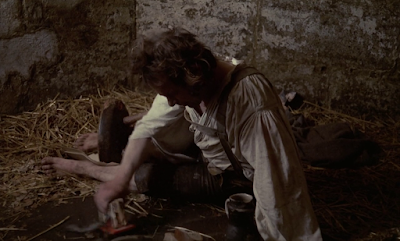 We see a 16 or 17 year Kaspar (Bruno S) chained up like a circus animal in a dungeon shack. Kaspar plays with his wooden horse, which seems to be the only tool of interaction. Then a mysterious man appears who tries to teach him to write & speak. The man releases Kaspar from captivity and instructs him the words ‘I want to be a gallant rider like my father was’. The feral boy was left in a town square, clutching an introductory note. His weird demeanor and inability to converse kindles the townspeople curiosity. The local law and medical officers make a thorough examination of Kaspar and places him in a jail cell. Kaspar learns a little of human moral values when he is placed under the care of a serene family and later also gets to experience the cruel side, when the townsfolk enters him into a freak-show. Kaspar is later adopted by kind & wealthy professor Daumer (Walter Landengast). Under the care of Daumer, Kaspar learns to write and read fluently and also develops a penchant for music. He also takes an unusual viewpoint in explaining the things he sees. Kaspar’s is increasingly agitated as his purest individuality is tried to be confined within the preconceived societal or religious values or trappings. 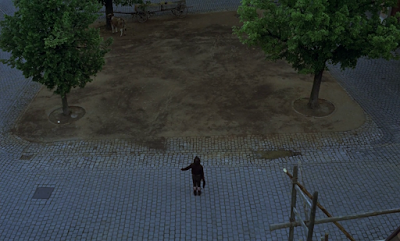 Kaspar’s caretakers and historians allude that the boy was a pathological liar and that the wounds gained by Kaspar due to various assassination attempts were only self-inflicted (to arouse pity or to suppress the quarrels he had with Mr. Daumer). The theory about self-inflicted wounds and the rumors about Kaspar being the ‘Prince of Baden’ weren’t entirely proven, but Herzog doesn’t waste time on disproving or approving theories or for that matter, he isn’t attempting to depict a historically accurate version of Kaspar Hauser. Herzog is more interested in exploring how a feral boy, with no previous connection with human or earthly things, would see the world or the trappings created by humans in the name of society and religion. While, the international title seems to insist the work as an expose on this mysterious boy, the enigma in the narrative is played out through the eyes of Kaspar Hauser. The people of 1828 Germany might be curious to place Kaspar’s appearance in context, but at the same time Kaspar itself is trying to adjudicate the weird behaviors of the social animals and the mechanism of overpowering nature. 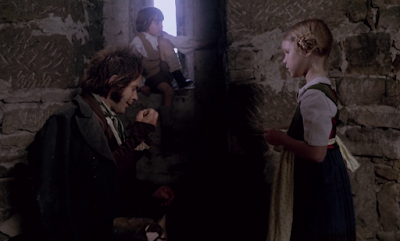 Beneath the oddball nature of Kaspar and absurdity of human conduct, Herzog diffuses an apparent layer through which humanity shines. Kaspar’s tears as he holds the infant (“Mother…I am so far away from everything”); his panic stricken reaction on seeing a chicken; and his moving response on hearing the music are some of the poignant sequences in the film. Renowned critic Roger Ebert calls the film "a lyrical movie about the least lyrical of men” and we could see what he means through some of these sequences. It would be futile for a viewer to approach “Enigma of Kaspar Hauser” as a narrative about the famous historical character. Herzog’s movie tries to offer an assortment of human behavior and splendid images to reflect or illuminate the mystery that lies inside each of us. The story of a desert caravan lead by a blind tribe leader is more about Kaspar trying to figure out the mystery of human condition rather than other way around. Herzog shows how mankind hates ambiguity and its absurdity to approach everything with logic. The professor’s logical question and the final autopsy sequence, followed by the elated reaction of the old man (“What a wonderful, precise report this will make”), portrays how the underlying beauty of things are ruined by simple facts. 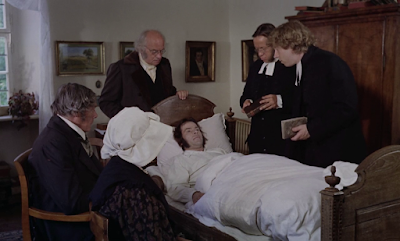 Kaspar is the perfect Herzog protagonist. Like all his documentary and feature film characters, Kaspar dreams about escape, only when he is placed into an enormous space, but confined by what’s called as  ‘civilization’. Herzog’s visualizes Kaspar’s perplexing thoughts about humans and nature through the obscure, foggy images. His confusing thoughts, however, makes up for some of the film’s excellent humorous reflections. Kaspar’s question to the female house-keeper, “What are women good for?”; his bewildering response about the tower space; the first time he comes across the word ‘emptiness’; and the way he muses “My coming to this world must be a terrible fall”, are my favorite contemplative comical moments. There is also the trademark Herzog sequences of cold philosophical inquiry, but somehow Bruno’s blank-faced vulnerability transcends this coldness. 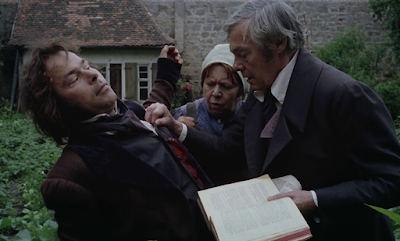 Herzog never approaches acting in a conventional sense. He doesn’t search for a Daniel Day Lewis, but instead casts performers, who inherently embody the essential part of the central character. Bruno S, a street performer was in real life locked away for 23 years in various mental institutions. Herzog states that Bruno was never insane, although he was little bull-headed and has the stubbornness of a child. So, Bruno isn’t really wearing a performance mask to portray Kaspar. The simplicity, vulnerability and the way he looks at the camera side-wards belongs to Bruno as much as to Kaspar. His reactions to the flame, the line-reading recital, and the manner he reacts after the stabbing are few of Bruno’s wondrous moments, which no other great professional actor couldn’t have imparted easily.

Werner Herzog’s “The Enigma of Kaspar Hauser” (109 minutes) is about a man trying to understand the niggling misfortunes of human existence. It depicts a virtuous individual emotionally touched by the beauty of nature and music, and untouched by degrading human traits such as cynicism, hatred, etc.

The Enigma of Kaspar Hauser -- IMDb
at October 20, 2015
Email ThisBlogThis!Share to TwitterShare to FacebookShare to Pinterest
Labels: Based on True Story, Existential Movies