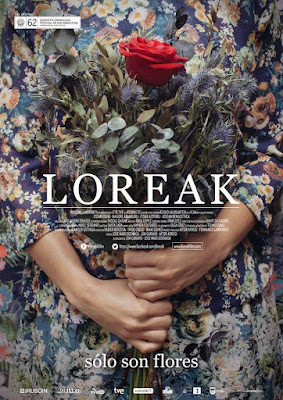 It is a tricky thing to depict the love felt by a world-weary, middle-aged married woman towards a person other than her husband. On-screen, the love is quickly transmuted to lust and soon the narrative contrives a full-blown affair waiting to annihilate the woman’s familial bonds. But, ‘love’ isn’t just a stepping stone to reach the destination called ‘lust’. Rarely do we come across films that deal with love of a middle-aged married woman without introducing sexual affair in the second act. Jose Mari Goenaga and Jon Garano’s minimalist Basque language movie “Loreak” (“Flowers”, 2014) is the rare, mature work that deals with the slippery feeling love imbues on us. It shows how source of love could emanate from strange things and how love changes one’s perception of others. “Loreak” is also an exploration of loss (death) and lack of communication. Its glacial pace, melancholia and unresolved ending makes it a film for grown-ups and for those vexed by watching inane romantic flicks.

“Loreak” commences with forty plus Ane (Nagore Aranbaru) hearing from the doctor that her menopause has started early. The doctor says there would be few changes like weight gaining and a feeling of melancholia. Ane, an office worker at a construction site, talks little to her husband Ander (Egoitz Lasa), who is glued to the TV screen. She literally has no friends at all to talk about loneliness & grief. But, unexpectedly Ane starts receiving bouquet of flowers every Thursday from an anonymous person. Inquiry at a local flower shop confirms the fact that the one sending flowers is a man. Ane feels pleased by the attention she receives through flowers and starts waiting every week for the courier guy to deliver. Ane places those resplendent flowers in the middle of house, which infuriates her husband. Later, she conceals those flowers and takes them to her office.

The narrative then jumps off to show us the life of toll booth attendant Lourdes (Itziar Ituno), who is married to a crane operator Benat (Josean Bengoetxea). Benat, who works in the same construction site as Ane, spends his day in the crane looking at workers & other things through his binocular. Lourdes has a boy named Mikel from previous marriage, and she is agitated by her mother-in law Tere’s (Itziar Aizpuru) disapproving attitude. The two women are silently fighting over for influence over Benat, while he tries his best to retain harmony between them. Unfortunately, Benat dies in a car accident. His loss makes the two women in his life to confront their feelings they had for him. Ane is also impacted by Benat’s death as she comes across hints that point out Benat might be the anonymous bouquet sender.

For an average moviegoer, “Loreak” might seem like a work where nothing much happens. Of course, it has a very simple story and devoid of any dramatic twists or sentiments. But, the subtle questions the movie raises on love & loss and the manner in which characters are mystified by loss warrants a deep reflection. At one point, Tere says “People don’t die, right until we forget them”. Benat definitely lives in the memory of three women even after his death, although he was ignored & berated when he was full of life. Directors Jose Mari Goenaga and Jon Garano points out the perpetual irony of how our perception of a deceased person varies from the perception we had when they were alive. The film-makers explore the basic restless human nature in search of love and the silent rage one feels when the loved ones die suddenly. 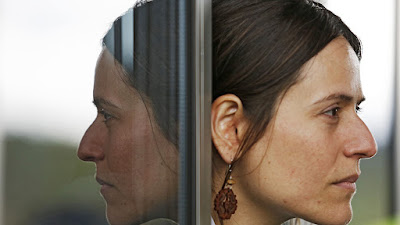 Through the lives of three women, the narrative showcases assortment of emotions like grief, despair, love & hope, but these emotions doesn’t work its way to bring about dramatic, unrealistic changes in the characters’ lives. For Ane, the flowers seem to infuse little color into her drab existence. For Tere, the flowers are the means to cherish the memory of her son, while the same flowers for Lourdes fetches grief and doubt. Despite the obvious symbolization of flowers, its importance changes from the way it is perceived by the characters. The flowers of “Loreak” apart from a being symbol of love transcends into a symbol for death. In one brilliant, symbolical sequence, the image of frozen body of Benat, under the covers (Benat arranged for his body to be donated to medical school) is juxtaposed with the image of drops of dew clinging around the flowers. 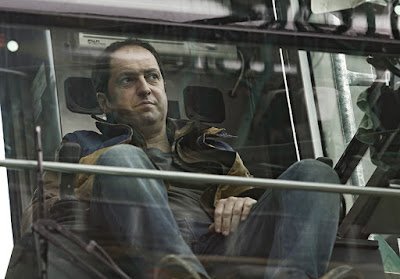 Love is portrayed in its original amorphous state in the film. It has tangible presence between husband and wife; mother and son; a woman and secret admirer, but this isn’t the kind of love whose role is determined easily. Love isn’t used to spew out melodrama or to provide grievous twists. It rather connects three fragmented personalities in a way unexpected by viewers. Nevertheless, this linking up love transcends its quality as the ever changing time and environment factors kick in. In the end, grief, love and memories are won over by all consuming force called ‘time’, although the film-makers try to instill some hope through that final image of flowers. Garano and Goenaga’s long takes and precise compositions reward the attentive viewers.

In the hands of some other film-maker the tension between the characters might have been used to deteriorate the sense of authenticity. At times, the symbolization seems more than necessary (especially the lamb accident scene), but for the most part the restrained direction eloquently observes things. The performances enhance the impact of the subtle script. The emotions portrayed by three central female characters transcend language barriers. Aranboru excellently brings out Ane’s confused state of love (her melancholic smile tells a lot). Itziar Aizpuru and Itziar Ituno as Tere & Lourdes pretty much play a cliched roles, although the dignity and strength they brought makes their characters three-dimensional beings. The scene where Tere, affected by dementia, and Lourdes converse in the end was brilliantly staged and acted which genuinely earns viewers’ tears.

Basque-language Spanish drama “Loreak” (100 minutes) is an intricate and engrossing exploration of alienation, love and loss. The absence of dramatization and the presence of obscure ideas, a bleak environment might equally irk and reward movie-buffs.