Riders of the Mist – A Celebration of a Resplendent, Multifaceted Tradition 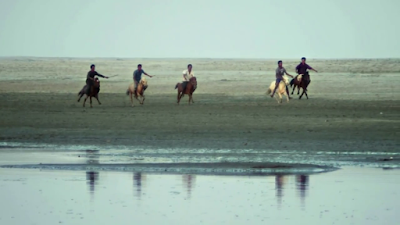 A carnival or a festival in a region could be viewed as an expression of the culture that encapsulates spectacular ceremonies & extravaganzas. The central element of the carnivals is to celebrate & recognize the cultural pluralism that is prevalent all over the world. India is a nation which is embellished by the words ‘Unity in diversity’. Despite being a land of pluralistic culture, there have been few evocative, pictorial works that observe this beauty and symbiosis in the diversity. Roopa Baruah’s “Riders of the Mist” (2015) is one of the rare Indian documentaries which honor a beautiful, unique tradition, conducted for the past 135 years in the Northeast Indian state, Assam. Like the Western carnivals, the anchor point of this Assamese tradition is bareback pony racing.

The pony race are part of Upper Assam’s Jorhat district, held in the local gymkhana from 1877. The annual races are the much-awaited event, especially for the riders of Mishing tribe (second largest ethic group in North-east India). Mishing tribe is known for their affinity towards Brahmaputra River and has raised ponies for many generations (to assist them in transportation). Initially, the races were started in British rule for tea planters, who used their horses for work in tea estate. But, over the years, the race has turned into a heritage event that brings together distinct ethnic or cultural groups of Assam. The thoroughbreds were replaced with semi-feral country ponies (and organizers of races provides fund every year for the development of Mishing community). 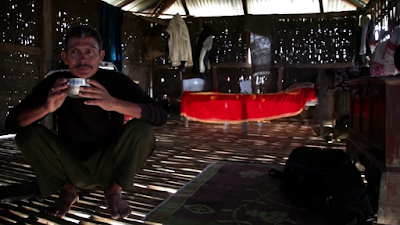 As the title beckons, “Riders of the Mist” starts on a misty morning along a riverine island of the majestic Brahmaputra River. The wild horses are being rounded up by the villagers to train them for the annual competition. Most of the participants in the race are third or fourth generation pony riders, who work in the fields or as laborers, rest of the year. Director Roopa tracks down the life of Deepak Bora and Heman Tai – men who have inherited the penchant for bareback racing from their forefathers. Deepak provides some vivid insights and intriguing myths about horses and their relationship with humans. The complex level of bonding these village men share with their semi-feral horses is absolutely astounding. For these jockeys, the festival sense slowly creeps in as they anticipate to win the coveted ‘Governor’s Cup’.

However, the desire to win the cup doesn’t arise from reaping the economic benefits of a victory. In fact, as Deepak explains, ‘the winner gets an award and five sheets of tin roofing as donation’. Deepak goes on to say that if he win the race, he will give away his donation for temple. In another occasion, we hear another rider telling how the preparation for racing only costs them money. So, the bareback pony races are purely based on passion and that fiery passion is much evident in the eyes of these calm-faced young men. Deepak and Heman wasn’t the only third or fourth generation people involved in the racing; there are also young stewards in the Gymkhana club who have been observing & preserving the age-old tradition as their great-Grand fathers. 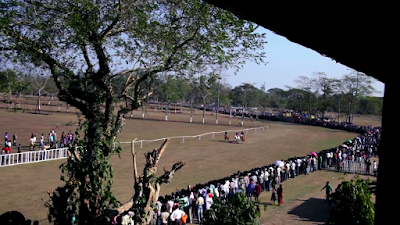 “Riders of the Mist” isn’t a simple sports documentary that traverses through the life of race participants to give us the winner. It wonderfully observes the symbiosis between humans and horses and between the humans, hailing from different socioeconomic class. The villagers’ preparation for the race and their various rituals & exciting myths might seem quirky for the uninitiated, but the film-maker is clever enough to observe the quirkiness that prevails inside the club. Oddities aside, the annual tradition seems to amalgamate the contemporary and age-old societies. Director Roopa’s restrained, nonjudgmental style depicts how passion flows in an unbridled manner, both inside and outside the opulent club. But, the documentary isn’t also just about the uniting of diverse people. There is the vital third element, which are the selfless animals itself. 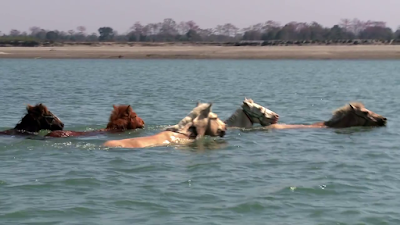 Couple of stunning passages is documented in “Riders of the Mist” (cinematography by Vikram Srivastava) that shows the arrival & departure of the ponies. These visuals convey not only about the selfless lives of the animals, but also how they had played a significant role in our cultural & economic thriving. There are wonderful words that adorn the final images of the movie (as the horses swim back across the river) portray how these animals allow us to ‘share the moments of joy’. A vast life lesson is buried within the altruistic attitude of the horses. As the director Roopa delivers those words, the title ‘Riders of the Mist’, which seems to denote the literal images of the riders on their pones, diffuses a metaphorical sense on us. Editor Hemanti Sarkar (“English Vinglish”, Peepli Live”) has done a commendable job in bringing together the seemingly different elements of the tradition. A sequence towards the end, where the dance hall of the elite merges with the hut of a tribal man, is one such astounding example of the editing.

“Riders of the Mist” (65 minutes) is one of the rare & best Indian documentaries that celebrates the nation’s indefatigable cultural pluralism. It is an outstanding glimpse into a custom held together by passion and altruism.

Riders of the Mist -- IMDb