The Aura – The Existential Stress of a Wallflower 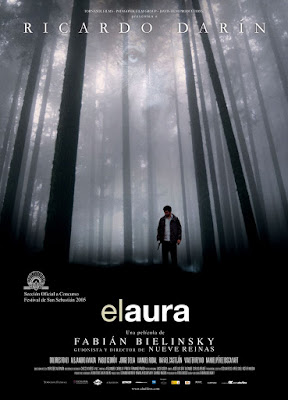 After the release of astounding existential heist thriller “The Aura” aka “El Aura” (2005), the movie lovers were robbed off a rapidly budding talent in Argentinian & world cinema. Buenos Aires born film-maker Fabian Bielinsky, whose brief but gleaming career (“Nine Queens”, “El Aura”) came to end on June 28, 2006 due to his sudden death (heart attack) at the age of 47. Bielinsky attained the directorial chair only through hardships and unceasing apprenticeship (he directed his first movie nearly after two decades entering into the industry, in 1983). Nevertheless, Bielinsky with his two films have explored or portrayed themes & visuals, which some of the mainstream directors haven’t pursued throughout their career. His penchant for the definitive style of narrative construction is evident, especially in ‘Aura’ and by each of the re-watches of “El Aura”, a movie-buff is left to ponder over what kind of master narratives did Bielinsky’s mind held for us?

The movie opens with a man lying on a white tile floor. He gradually grasps his surroundings, gets up and as the camera pulls back, we see he is in the lobby of a bank ATM. Later, we learn that the man has had an epileptic seizure. His name is Esteban Espinosa (Ricardo Darin) and we see him in his workshop, preparing the lifeless body of a fox (a taxidermist) for a museum in Buenos Aires. The loud music in the workshop drowns out the beckoning of his wife. Espinosa has a photographic memory and his favorite hobby is to design elaborate robbery fantasies, which he explains to a fellow taxidermist Sontag (Alejandro Awada), while waiting to get paid for his work. Sontag asks the loner Espinosa to accompany him on a hunting trip through the forests of southern Argentina. Espinosa immediately rejects the proposal, but when he returns home, he sees that his wife has left him and agrees to the hunting trip.

Espinosa, the man experiencing an existential crisis, seems to have been affixed to a place. He is stuck inside himself and this lack of movement (literal as well as figurative) is wonderfully visualized in a earlier scene, where the side profile of Espinosa sitting in his bed (with the letter his wife has left), seamlessly morphs into him sitting in the airport lounge, then in the airplane and finally in the jeep, going to a forest resort. Since the local casino is gearing up for its last run, the town is riddled with guests and so Espinosa and Sontag are forced to stay in a backwoods cabin, managed by an elderly man Carlos Dietrich (Manuel Rodal). As Dietrich has gone on a trip, his young wife Diana (Dolores Fonzi) is in charge.

The next day hunting doesn’t go as planned as Espinosa botches Sontag’s chance to hunt a deer. They both exchange some caustic remarks and later Sontag leaves due to a personal problem. Espinosa, the guy who doesn’t want to kill animals, wants to prove to his friend that he is a tough guy. Ultimately, he takes a shot, but unfortunately, he brings down some bystander. The accidental killing, however, opens up new possibilities in Espinosa’s life. Through a series of coincidences and unpredictable turns, Espinosa gets the chance to perform a real time, perfect heist. But, this isn’t a conventional gripping thriller as the protagonist is both an uninvolved onlooker and a chief player.

Espinosa is the perfect ‘noir’ hero, besieged by loneliness and lack of ties. The film’s title indicates the trance state the protagonist experiences before the epileptic seizure. Espinosa explains this to Diana: “everything stands still and a door opens in your head and lets things in. There is nothing you can do to stop it. You're free: no options, no choice, nothing for you to decide. Things narrow and you surrender yourself”. Since noir heroes are defined by their downfalls, one gets a feeling that Espinosa has been in this trance state for a long time, waiting for the inevitable. Espinosa’ epilepsy isn’t some gimmick that is instilled to move forward the narrative.

The theme of frozen time (or the state of ‘aura’) is repeatedly evoked in the narrative; through Espinosa’s vivid photographic memory or even in the moments when he points a gun at someone. There are many analogous sequences in the film, where time freezes and all that’s left for the protagonist is to surrender himself. Director Bielinsky diffuses this idea of getting stuck in time or place to other minor characters too. Diana and her brother Julio are in a state, where nothing is left for them to decide. One of the vicious thugs (Pablo Cedron) says “The first I saw you I said, ‘this isn’t going to work”, but he goes with Espinosa’s plan as if it is inevitable. The other old thug (Walter Reyno) is more afraid of moving out than a botched heist plan.

Bielinsky’s script has got to be one of the original scripts in cinema. It is crafted with such attention to detail, which transcends the nature of some of the conventional crime cinema elements. The script evokes the dreamy, deeply psychological narrative approach of Antonoini’s or Christopher Nolan films (“Insomnia” & “Memento”). The vivid explanation of Espinosa’s psychological state imbues us the sensation to contemplate on the blurring line that separates reality from fantasy (just like in “Memento”). Bielinsky was also wonderfully inventive in moving forward the narrative. Two sequences were absolutely awe-inspiring for the way it was written and visualized on-screen: the botched heist involving Vega as Espinosa observes from a detached state; the scene in ‘El Eden’, where Espinosa makes a little conversation with the little girl, Vanina and learns a lot. Bielinsky was also able to keep the suspense till the end, even though on the outset, the narrative seems to be a simple setup.

Director Bielinsky diffuses other themes like the treatment of women and the symbiosis between animal and human. The vital & minor characters seem to be men, who had ignored their life-partners or has beaten them down. The romantic potential between Diana and Espinosa is hinted at, but Bielinsky is clever enough to not go down that predictable route. For Diana, the prospect of a new relationship seems to be less intriguing than a life that liberates her from the chains of men.  The recurrent close-ups of the ominous dog symbolize the arousing animal side of the protagonist (or his transforming moral sense). The scene where the dog gives a baleful, accusatory look to Espinosa over what unfolded in the woods was one of the few moments that proclaim Bielinsky’s superior directorial abilities.

Music is another strong point of the movie, which heightens the thrilling sensation particularly in two contrasting sequences: when Espinosa trembles with the rifle after sighting the deer; and when Espinosa calmly observes the shoot-up in factory, where people scatter like a deer in the forest.  Performances are all top-notch and Ricardo Darin is perfectly convincing as the damaged existential hero. Through limited dialogues, he conveys his characters’ dilemma & unrestrained fantasies. Look out for the sequence when the two thugs take Espinosa into the woods after discovering Dietrich’s cellphone; Darin conveys ingenuity, fear, detachment and deceitfulness within that brief scene.

“The Aura” (134 minutes) is an excellent existential noir and a superior atmospheric thriller. Beneath the film’s taut, simple narrative lie complex, unobtrusive themes and perceptions that perpetually seize us.

The Aura aka El Aura -- IMDb