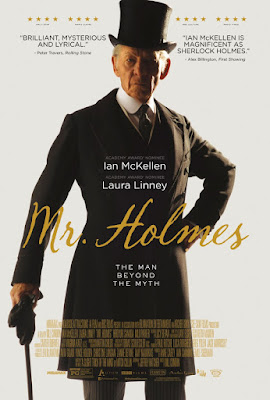 “Death, grieving, mourning, they are all commonplace. Logic is rare, and so…I dwell on logic” says a 93 year old Sherlock Holmes, with failing memory, to a young boy full of life in Bill Condon’s elegant character study “Mr. Holmes” (2015). Nevertheless, this film is about the celebrated detective coming to terms with those ‘commonplace’, humane feelings. Arthur Conan Doyle’s fictional detective character is one of the most durable and easily adaptable characters in theatrical, cinematic & literary medium. More than dozens of actors have played Sherlock and contemporary authors keep on speculating on the detective’s later year adventures (“Beekeeper’s Apprentice” series by Laurie R. King). Mitch Cullin’s 2005 novel “A Slight Trick of the Mind” is one of those Sherlock spin-offs with a touch of melancholia. Mr. Holmes growing old isn’t entirely a fresh idea for now, but Cullin’s novel isn’t a detective story, unlike the voguish modern versions.

“Mr. Holmes”, based on Cullin’s “A Slight Trick of Mind”, shrewdly performs the difficult task of touching upon the traditional motifs of the famous sleuth, while also travels inward to confront the puzzle-solver’s own emotions.  We all know that Conan Doyle’s super-sleuth is the epitome of rationality, but Bill Condon’s movie works its way to showcase how the man's coveted rationality fails or disables him to solve an enigma or a problem. The film starts with very old Holmes (Ian McKellen) arriving at his farmhouse, governed by a brusque housekeeper, Mrs. Munro (Laura Linney) and her effervescent young boy, Roger (Milo Parker). The year is 1947 and Mr Holmes has returned from a tired journey to Japan, in search of ‘prickly ash’. For nearly three decades, Holmes has been a beekeeper and has written a monograph on “The Value of Royal Jelly”. Thanks to Sherlock’s lack of refinement, the farmhouse has seen a succession of exasperated housekeepers.

The latest domestic help, Mrs. Munro isn’t also looking to stay long with the old detective. She already has an offer from hotel owners in Portsmouth. But, her son Roger, whose father was killed in the war, is intrigued by the deduction skills of Holmes and by the recollection of the detective's last case. Of course, the elderly sleuth couldn’t write the story, not just because he has written about his cases (the writings were all taken care of Mr.Watson and the doctor is blamed for having diffusing his own fictional ideas), but because Holmes couldn’t simply remember what happened (and he doesn’t want to leave the world with a ‘sense of completion’). ‘The Royal Jelly’, which is now replaced with ‘Prickly Ash’, is the means to kindle his memory, but the real inspiration comes from Roger. The boy’s innocence and marvelous energy pushes Holmes to journey inward. And, the 30 year old comes back in little pieces. Holmes’ last case, as explained in series of brief flashbacks, is about a young mysterious & melancholic wife Ann Kelmot (Hattie Morahan) and her alleged fixation on glass harmonica. 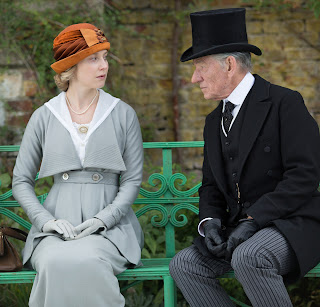 As in the tradition of spin-offs, Jefrrey Hatcher’s adapted screenplay is filled with revised, cool details. The long gone Dr. Watson is said to have made fictions or created a legend on the detective’s exploits (who of course is itself a fictional character). 221B is portrayed as fake address (once again conceived by Watson) to keep off the general public. Holmes isn’t also as eccentric as his literary counterpart and he was never fixated on the deerstalker hat or the pipe. The script also enhances some of the familiar characteristics of Holmes to generate a bit more poignancy. Holmes loves or endures solitude; he doesn’t have time for nostalgia or grief; and uses people as they seem fit (Holmes’ famous misanthropic view).

“Mr. Holmes” weaves three different story elements -- rendezvous in Japan; friendly relationship with Roger; and the mystery of final case – to explore Holmes’ prickling conscience and how he comes to terms with it, by showcasing real emotions and by concocting a soothing, make-believe story. Of course, Holmes approaches each of the experiences with his trademark cynicism. Holmes’ especially sees Roger as a means to take care of his dying bees. But, gradually Holmes accumulates knowledge from the boy that replaces cynicism with hope and makes him understand grief and yearning. He not only learns about his base human emotions, but also learns to respect others’ grief & desire. There are few rough edges in the way director Bill Condon weaves these series of elements. The way Holmes attains the sense of completion may seem a little contrived, but these are all little blemishes in an otherwise well-made character study. 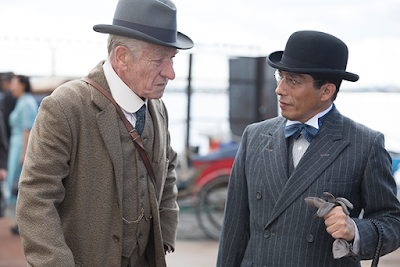 A lot of viewers might be irked by the fact that “Mr. Holmes” is a character study with no chilling central mystery. As Holmes grasps inside his mind to solve the enigma of Ann, the viewer might be led to think there is indeed a complicated puzzle at the center. However, Ann’s elusive conversation with Holmes simply reiterates the fact that the film isn’t a procedural thriller. Ann’s story is about a woman who desperately wants her feelings to be understood.  Her husband Thomas places the blame for Ann’s grief on an eccentric outsider. Holmes approaches Ann with his usual style of rationality, thinking there might be other grave intentions for Ann’s deception. But, there’s no complex, bad intention involved. Ann thinks at least this ‘rational man’ could understand her. However, Holmes patronizing reply (“You have a husband who loves you. Go home to him”) only makes Ann to choose the already made-up decision. Holmes’ coming to terms with Ann’s fate enables him to understand that sometimes lies and genuine display of emotions (like grief which Holmes thinks as a weakness) could really save people from misery. He also learns how clear-cut rationality isn’t always a problem-solver. 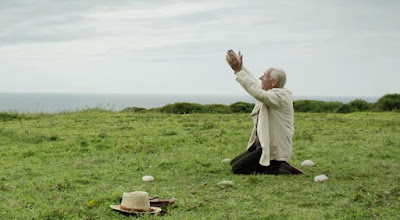 The bee vs wasp analogy doesn’t seem to be simple good vs evil struggle. The wipe-out of wasps more or less signals the banishment of Holmes’ unbridled cynical attitude. Or is it a confirmation of Holmes’ belief that ‘Queen, drone, workers’ hierarchy (of bees) is the perfect way of life than the anarchist, self-destructive behavior (of wasps). Whatever it is, it is a great sight to see Holmes in the end, a man who fully embraces the British way of life, to encompass a little of multiculturalism (as he does the stone-placing funeral ritual of the Japanese).  Director Bill Condon and veteran actor Ian MacKellen previously collaborated for the semi-fictitious last days of the director James Whale titled “Gods and Monsters” (1998). Condon has adapted the same understated, character driven nature of his previous collaboration with McKellen to “Mr Holmes”. There is nothing ostentatious about the direction, although at times the melodrama gives us a ‘made-for-TV’ feeling. McKellen’s performance takes in all the baggage of his characters’ solitude, offering up poignancy and mature wisdom.

“Mr. Holmes” (105 minutes) lays bare the less explored sides of the much revered Conan Doyle’s character Sherlock Holmes.  Those who seek a thrilling mystery must be forewarned, since this is a character study of a highly intellectual man disclosing the frailties of his mortal life.