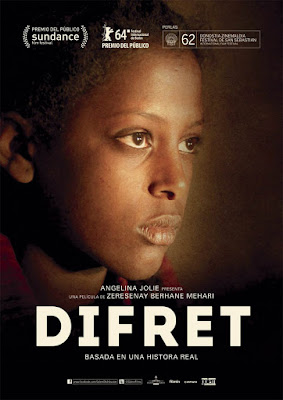 Ethiopian film-maker Zersenay Mehari’s feature film debut “Difret” (2014) is the kind of work that amply uses the cinematic medium to shed light on things, which may not have attained the same impact with a public lecture. Early into the film, a fourteen year old girl Hirut Assefa (Tizita Hagere), belonging to a farming community, stands nervously in the classroom as her homeroom teacher is about to tell the test results. After asking few questions he says to Hirut: “I putting in a recommendation to promote you to fifth grade”. As the classes finish, the girl walks with a smile on her face, feeling the cool air on her face, but soon a bunch of pony-riding, gun-toting men kidnap her and escape into the woods. “Difret” of course isn’t a thriller about teen abduction. It is a social drama that condemns the long-held tradition of ‘Telefa’ – the practice of abduction for marriage in Ethiopia.

The movie takes place in 1996, a year in which the decision on Hirut’s case criminalized the ‘telefa’ tradition among the villages of Ethiopia (based on the case of Aberash Bekale) [although the abductions for marriage declined vitally after the 1996 case, the practice of ‘telefa’ is said to have increased in recent times]. Hirut’s poor farmer dad wanted his girl to be well-educated. His elder daughter was abucted & married few years before Hirut’s abduction. The kidnapping was in fact seen as a grand romantic gesture and was said to be encourage by village elders. Hirut was locked in a mud-house and in the night she was raped. Next day, her would-would husband announces there is nothing to worry and that they would get married soon and later blessed with a child. Hirut makes her escape by stealing her ‘suitor’s’ gun and when cornered, she shoots and kills him. As per the custom, she has to be immediately killed (by slicing the throat), but the village police takes her in their custody. 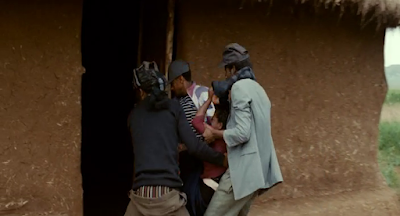 Meaza Ashenafi (Meron Getnet), who lives in the capital city of Addis Ababa, works for Andinet Women Lawyers Association, crusading for women’s rights. She calmly handles the blatant sexism thrown at her from every corner. Earlier, we see her handling a domestic abuse case in a dignified & lega manner. When Meaza hears about Hirut, she immediately appears in the village station, but is only met with disdainful answers by DA and local inspector. The law officers suspect that the girl might be 17 or 18 and blocks off medical treatment or bail, claiming that Hirut shot a man in cold blood. They are neither disturbed by Hirut’s abduction nor ready to question the brutal tradition. Meanwhile, village elders convene to impose a harsh punishment on Hirut’s family (for opposing the village custom). 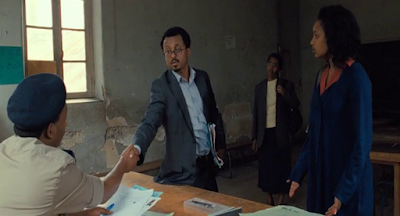 “Difret” is utterly predictable. It mixes the Hollywood legal thriller setup into the docu-drama structure. Director Mehari’s execution, however, is very good at many places and the raw performances by the two lead female characters make us look past few of the narrative turbulence. The real Meaza Ashenafi founded Ethiopian Women Lawyers Association (EWLA) in 1995 and received ‘Hunger Project Award’ in 2003 – known as African Nobel Prize – for advocating women’s rights & empowerment in Ethiopia. Aberash Bekale case (Hirut in the film) is what brought Meaza’s name and her organization to prominence and so Mehari chosen it for his debut narrative. Since, Meaza was a young lawyer (and her organization just started), the struggles and doubts she faces provides for natural story elements. 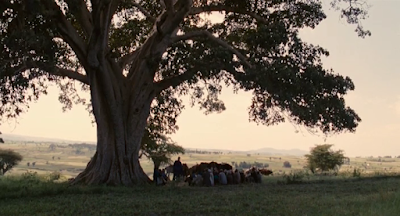 Director Mehari learned film-making in USC School of the Cinematic Arts (Los Angeles) and has returned back to his country of birth (after working near a decade in Hollywood) to make impactful film on the social issues faced by the African country (the film premiered Sundace Film Festival and shortly before the premiere Angelina Jolie is added as ‘executive producer’). Through “Difret”, Mehari hasn’t portrayed Ethiopia as a nation steeped in out-dated, despicable traditions. He doesn’t even demonize people who strongly believe in the custom of ‘telefa’. He subtly depicts how sexism prevails among the entire top to bottom layers of community, but at the same time the director is smart enough to turn the narrative into a bleak feminist movie, where every male is a misogynist. Hirut’s father and teacher stubbornly fight against the village tradition, just like Meaza. 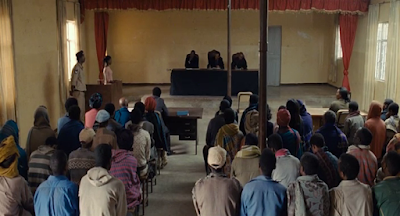 The scene where the village elders convene to decide on fate of Hirut was one of the powerful sequences in the film. We hear appalling comments from the men gathered, but these people are not demonized for their views. Later, we see Meaza going to the house of a villager, who has vowed to kill Hirut. The man who made caustic remarks earlier doesn’t holler at her and a woman from his family invites Meaza for lunch. It would have very easy to demonize these people, but the director chooses to show them as human beings and also highlights on the villagers’ amazing hospitality tradition. The distressful feelings that mask Hirut, while staying away from the family, were also excellently presented without a strong dose of melodrama. Nevertheless, Mehari’s movie does struggle from few pacing issues and narrative quirks.

The director builds up the intense emotions involved behind Hirut’s case in the final scene, through different people tensely sitting in front of a radio. But, the court proceedings don’t infuse enough tension on the viewer. A witness character is introduced at the last minute and he doesn’t seem to provide any fresh context on Hirut’s struggle. There are few other amateur narrative tropes in the film’s third act that forces us to remember that it is a directorial debut. As I said earlier, the two leads are more than strong. Hagere as Hirut (her bewildered reactions to modern conveniences are a delight to watch) and Getnet as Meaza sensitively explore their respective characters’ inner conflicts without employing easy, over-the-top emotions.

Difret -- IMDb
at October 13, 2015
Email ThisBlogThis!Share to TwitterShare to FacebookShare to Pinterest
Labels: Based on True Story, Social Drama