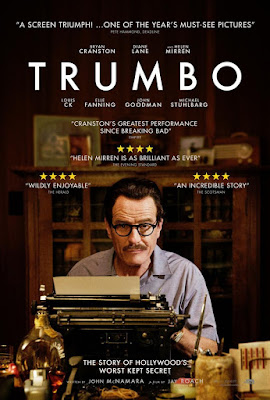 On screen, Hollywood likes to showcase its heroes standing up against injustice, although the industry’s notorious off-screen injustices had rarely been a talking point. The story of Hollywood blacklist haven’t been addressed much in American cinema and if so, the dark period of McCarthyism is confined to the court-walls, where the footage of prominent celebrities being asked ‘Are you now or have ever been a …..?’ is shown. Jay Roach’s “Trumbo” (2015) offers a fine perspective on the alleged ‘Red Menace’ inside Hollywood. Even though the director Jay Roach had been known for films like “Meet the Parents” & “Austin Powers”, he is restrained and earnest in this particular portrayal of the mid 1940’s to early 1960’s Hollywood.

After the surrender of fascist powers at the end of WW II, democratic America and communist Soviet Union whipped up the political climate by making it to be a contest for ideals. Immediately, the ideals that were were received or tolerated in the name of democracy became UN-American. The House of UN-American Activities Committee started their investigation on alleged dark clouds of communism and gained nation-wide attention by inquiring upon famous actors, screenwriters and film-makers. In “Trumbo”, a committee spokesperson declares “Movies are the most powerful influence ever created” and with such statements, the creative liberty of honest writers were scanned over invisible ‘red menace’. The public hearings involving the era’s greatest celebrities paved way to marvelous political theater, but the blacklisted writers and other film personalities went through decades of unemployment and banishment. Novelist and screen writer Dalton Trumbo (1905-76) is one of the significant and defiant screenwriters of that period, who despite all the agitation faced, never wavered from his belief in free speech. 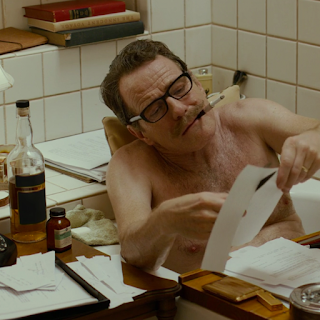 The first time we see Trumbo (Bryan Cranston) on-screen he is sitting and thinking at his favorite place: a bathtub with a half-smoked cigarette. Once he gets an idea, he whirls into frenzy by clicking into the typewriter. In the early 1940’s Trumbo had been the most acclaimed and highest-paid screenwriter, who is always involved with Oscar-winning hit films. He was busy writing poetic dialogues for Edward G. Robinson’s (Michael Stuhlbarg) gangster pics and signing up contracts with MGM. Trumbo had been a member of the American communist party and with the brewing Cold War, he was instantly identified as Communist sympathizer. The alleged Red Terror in Hollywood is shown to be personified by columnist Hedda Hopper (Helen Mirren) and famous star John Wayne (David James Elliott). When Trumbo and his screenwriter buddies refuse to testify before the UN-American activities committee, they are blacklisted (known as ‘Hollywood 10’), their contracts nullified and eventually sent to prison. 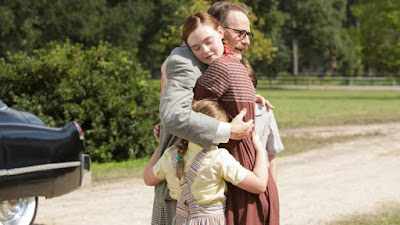 Trumbo’s family is composed of a loving and supportive wife Cleo (Diane Lane) and three kids – the strongest and challenging of them is the eldest Nikola (Elle Fanning). Upon his release, Trumbo starting using pseudonyms to crank out cheap scripts for King Brothers’ (John Goodman & Stephen Root) low-budget flicks. He also secretly sells his screenplays to studio writers, which are made to movies like “Roman Holiday” (1953) and “The Brave One” (1957) and even fetched screen-writing Oscars. Trumbo’s streak of egotism, desperate steps to stay afloat financially, combined with contradictory virtue of selflessness does temporarily break him up from wife and kids (fueled by booze & pills). However, his patient struggle to end the blacklist gets under limelight as Kirk Douglas (for Spartacus) and Otto Preminger (Exodus) promptly & publicly credits him for his amazing script writing talent.

Bryan Cranston’s elegant and witty performance as Trumbo serves as the anchor point for narrative, which was otherwise riddled with biopic bromides. The actor finely brings out the inherent contradiction to Trumbo’s nature: lectures like a radical and lives like an autocrat; an elitist writing for the masses. But, Cranston never makes this conflicting force of Trumbo to make him a cynical figure. He adopts the screenwriter’s rough, deep manner of speech, although it never becomes a mere impersonation. From the performances perspective, apart from Cranston, “Trumbo” offers a whole lot of scene-stealing presences. Part of the delight in those performances is seeing actors playing well-known personalities like John Wayne, Robinson, Otto Preminger and Kirk Douglas. Some of the actors playing such renowned persons don’t look like them, but there are reasonable facsimiles to make it feel authentic. The best of all famous personality cameos belongs to Christian Berkel’s overbearing Preminger (and let’s also not forget the baseball bat bashing sequence of Goodman). 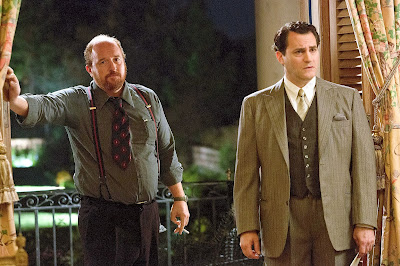 Director Roach had done well with the evocation of vintage Hollywood and mixes quite a few old news reels (featuring Humphrey Bogart, Lauren Bacall, etc) to a good effect. But, both Roach and screenwriter John McNamara is often caught between the efforts to broaden their canvas and detailing the events of Trumbo’s life. So, the occasional phony biopic elements are pushed up to concentrate on the central character, while losing its focus on other significant players. When Arlen Hird (a composite character of many real-life screenwriters, played by Louis C.K.) asks Trumbo, “Do you have to say everything like its going to be chiseled in rock?”, we are hinted at how writers are so invested in their cause that they neglect a lot of things around them. However, neither Arlen Hird nor his contemplative question is never profoundly dealt with. Instead, we get a typical familial tribulation which is resolved with a simple, sentimental sequence.  Despite such little bumpy turns, the heart of “Trumbo” is at the right place and so we get a potent sense of how heroic the screenwriters really were in those oppressive times (the final inspirational speech diffuses a poignant feeling). And, for those who learn or approach historical moments through cinema, “Trumbo” perfectly entertains as well as enlightens.

Despite stumbling into moments of didacticism, “Trumbo” (124 minutes) remains as the compelling and lively account of Hollywood’s blacklist era. The mixture of heroism, idealism and self-obsession Cranston brings to his titular character is a reason enough to watch the film.

Trumbo -- IMDb
at February 23, 2016
Email ThisBlogThis!Share to TwitterShare to FacebookShare to Pinterest
Labels: Based on True Story, Hollywood Movies

A very good movie, incidentally on the topic of "Nationalism". Watched just few days back. Direction is too good.