12 Years a Slave -- Strangles the Myths about American Slavery 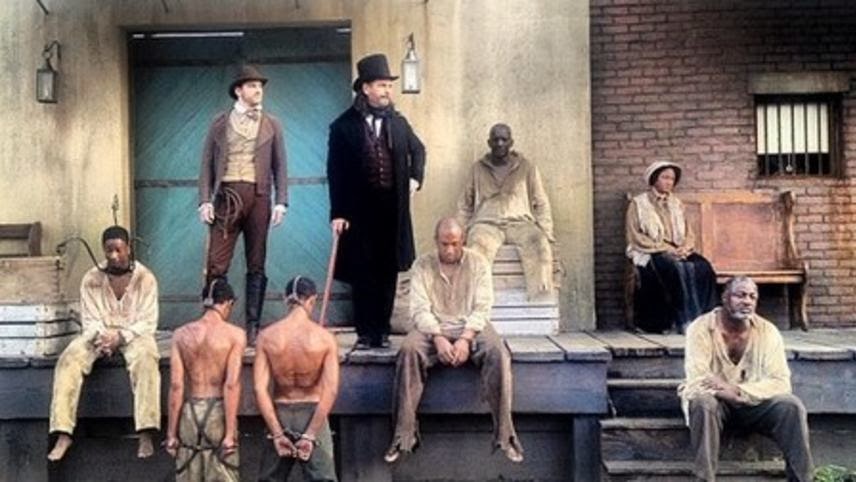 Director Steve McQueen’s two previous movies were known for making graphic, unflinching studies on unpleasant subject matters. He makes these rigorous case studies by remaining intellectually detached. He also keeps his camera on affairs, which other film-makers would leave it to the viewers’ imagination. However, there is no denying that the emotion and empathy he brings on his subjects is something we have never experienced inside the confines of Hollywood.  His latest offering – ‘unrelenting masterpiece’ for some and ‘Oscar-bait‘ for some – “12 Years a Slave” (2013) tells the true story of Solomon Northup, an African-American freeman plunged into the horrific chapters of American history. Based on the 1853 memoir written by Solomon, this film doesn’t merely tell his story; it immerses us into his appalling experiences.

The American civil war was mostly seen (especially in Hollywood movies) as the battle over states’ rights and it was alleged that the slaves actually lived very well under their benevolent masters until all this talk of freedom. From the cinematically grand and thematically abominable “Gone with the Wind” (1939), most of the movies gave away this idea that the antebellum ‘American South’ is a paradise, filled with charm and kindness. The mini TV series “Roots” (1977) created a mass cultural impact and totally written off all these perpetrated historical lies. Movies like “Glory”, “Amistad” and “Amazing Grace” didn’t fully re-create this unspeakable human de-gradation. The wallop of the whippings (both emotional and physical) in “12 Years a Slave” may not reach the heightened sense of “Roots”, but at the same time, it broaches the subject of slavery without squandering it carelessly. 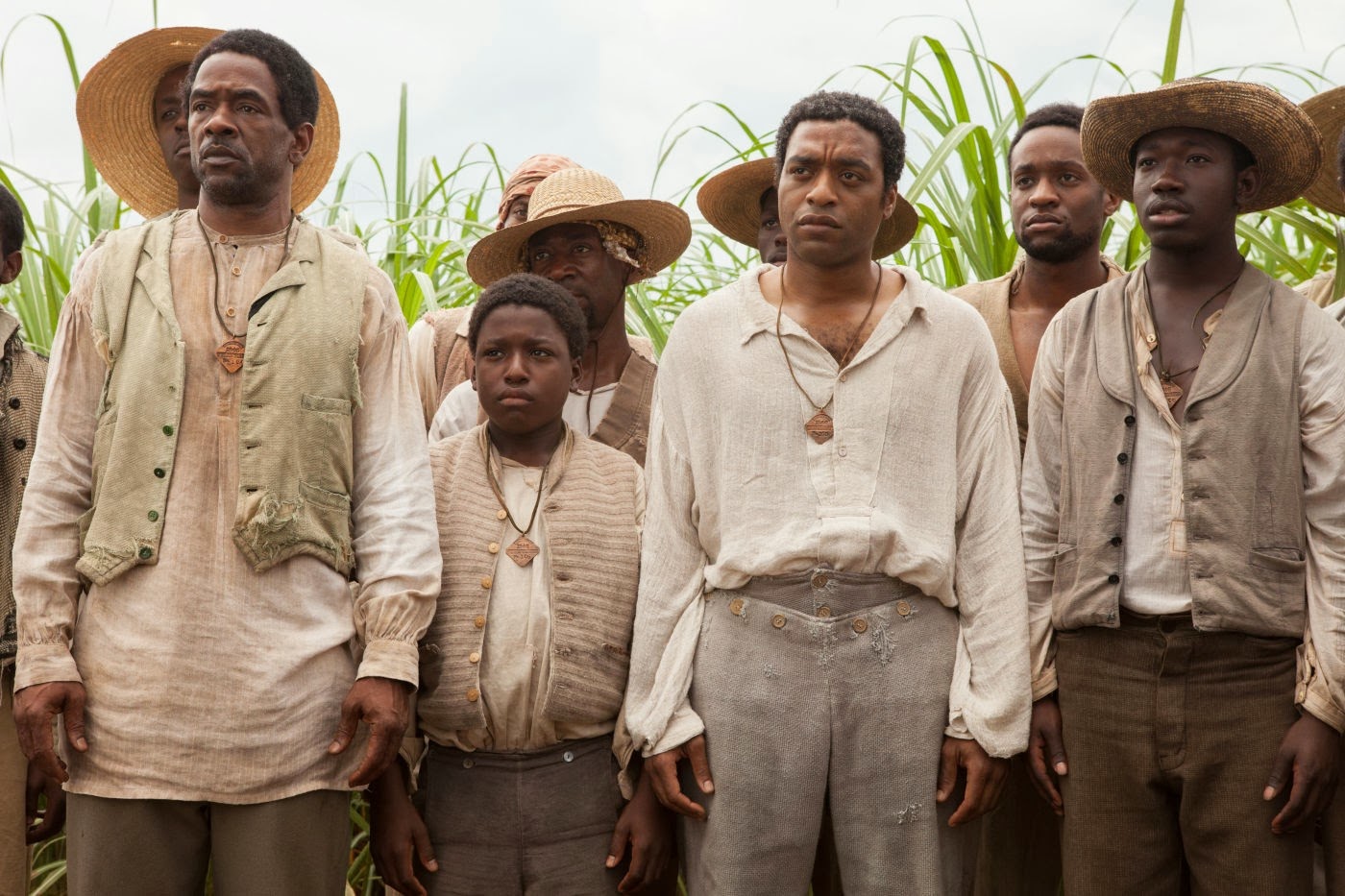 “All right now, y’all fresh niggers, y’all gonna be in the cuttin’ gang.” says a white overseer to the bunch of slaves, including Solomon Northup (Chiwetel Ejiofor).  Through a flashback shift, we see that this enslaved cane cutting man was actually a freeman, residing in Saratoga, New York. Solomon Northup is a gifted violinist and lives with his wife and two children. In 1841, a couple of cheap-jacks persuade him to come with their traveling circus crew. Solomon gets a good pay for the two weeks work, but after the fancy dinner, he wakes up to find himself inside a brick cell in shackles. After realizing that he has been sold to slavers, Northup protests against his fate. However, the savage beatings make him silent. He is transported with other captives to South. A cruel slave trader (Paul Giamatti) names him ‘Platt’ and sells him at an auction to Master William Ford (Benedict Cumberbatch).

Ford is shown as a well-mannered hypocrite. On Sunday, he preaches Scripture to his slaves and this pious man contradicts himself by separating a mother forever from her children. Ford is also very much aware of Northup’s intelligence and his previous status as ‘freeman’, but the debt he owes to the slave traders keeps him quiet. When Northup trounces Tibeats (Paul Dano) – one of Ford’s loathsome overseer – he is strung up on a tree, surviving for hours, by only by standing on his toes. Later, Ford sells him to the sadistic cotton famer Edwin Epps (Michael Fassbender). There he fully understands the despair of the fellow slaves and tries not to give into the temptation of escape, while nurturing little hope for making a contact with outside world. Epps is obsessed with a beautiful young slave Patsey (Lupita Nyong’o), which fuels the anger and jealousy of Epps’ wife (Sarah Paulson) and leads to further unspeakable sufferings. 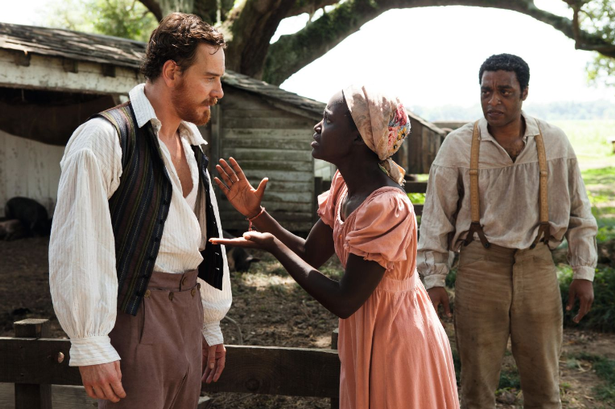 All the three of McQueen’s films has the quintessential, dynamic performance of Michael Fassbender. Their powerful and productive bond is something similar to the celebrated link between Martin Scorsese and Robert De Niro. The uncommon ferocity of Fassbender – especially in the scene, where he brings his face close to Solomon to determine whether he is lying – vividly brings out the most nightmarish master imaginable. Ejiofor has played notable supporting roles in the past (“Children of Men”, “Dirty Pretty Things”), but Northup is by far his most essential role to date. He slowly walks us through this hell with a stunned bewilderment. The title itself gives away the story’s proceedings and the ending, but Ejifor’s performance takes up the challenge by portraying the character with dignity and passion. By remaining motionless, and by keeping up the decency among all this madness, he forces us to behold events we don’t want to watch, to hope for his deliverance. Brad Pitt’s extended cameo as Canadian carpenter is a bit distracting because of his celebrity status, but it’s also a key performance that might have helped the movie to get made. Lupita Nyong’o and Benedict Cumberbatch’s memorable performances create a greater impact, even though they have a very limited screen time. 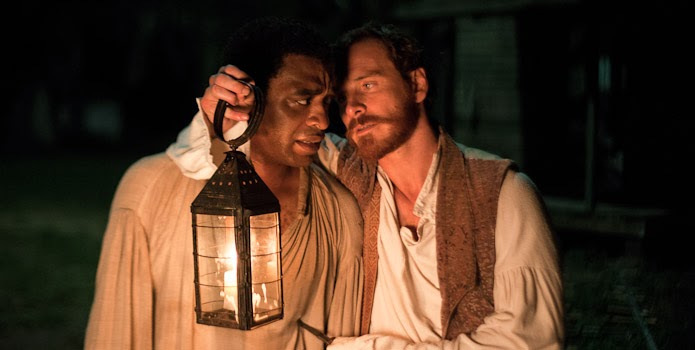 Northup’s memoir was written chronologically, but John Ridley’s screenplay astutely starts in the middle, with Northup’s new identity ‘Platt’, which makes the flashback doubly shocking. Ridley’s script doesn’t set out to pluck our heartstrings; it rather unfolds this historical horror show without demurring any of the brutal truth. Director McQueen sheds most of his art cinema conventions to adapt the narrative of classical cinema. Here, he doesn’t heavily emphasize on the visual style, like in “Hunger” and “Shame”; he rather keeps his focus on Solomon’s desire for freedom. Still, you could find his directorial style in the moments of silence, such as in the scene, where Solomon stands alone in the woods, listening to the sounds of nature, while trying to wrap his mind around the current situation. Few of McQueen’s camera angles and juxtapositions, gives a chilling experience. One particularly effective scene, which employed such techniques, is the one, where Paul Dano sings an unpleasant song of warning about what happens to runaway slaves. Most often, McQueen tries to show the effect of violence on the mind and soul, except for the climatic whippings, which is the only sequence designed to wring out the tears.

“12 Years a Slave” is the most clear-sighted feature film about slavery. It makes us cry, not only for Northup’s 12 years, but also for all those forgotten men and women, who never knew what freedom was like.

Rated R for violence/cruelty, some nudity and brief sexuality
at January 11, 2014
Email ThisBlogThis!Share to TwitterShare to FacebookShare to Pinterest
Labels: American Indie Films, Based on True Story, IMDb Top 250

Nicely done, Arun... my favorite performance of the film was Fassbender's... I don't think it impressed you as much.

@ Murtaza Ali, thanks for the comment. I think both Ejiofer and Fassbender were equally great.

Really appreciate the way you cover the story and all the characters in your review. But don't you think so, this movie had nothing new to offer. It had the same celluloid which we already witnessed in The Help, Django Unchained and similar kinda movies..

@ Monali, thanks for the comment. I thought it had lot to offer than "Help" and "Django Unchained." Both of those aforementioned movies reduce the experiences of black people sufferings in a way, so that those experiences play in white people’s moral educations. It has moral shortsightedness. "Whiteness", in "12 Years a Slave" is not just seen from a neutral point. It is also shown as a complex construct, which merges itself dangerously to class and gender. The movie also shows how slavery coarsened the moral sensibilities, not just of the white people who practiced it, but of the black people too. Solomon did terrible things to survive, unlike Aibileen Clark (Viola Davis) in "The Help", who is a saint, or Django, who is an action hero. I liked "Help" (both the book & movie) and thought "Django" was a brilliant revenge picture, but "12 Years a Slave" examines the issues of slavery in an unsparing manner. Django is like a slavery-era superhero, whom with the bloodshed, gives the audience, a satisfying catharsis, but "12 Years" asked me this: What possessed people to think themselves as superior to the extent that they would stack and ship them across seas? and How could a society collectively nod "OK" to this enslavement of millions? And it subtly asks many more questions, which I think requires a separate article to explain.