Captain Philips -- A Hijack Thriller Made with Unfailing Compassion 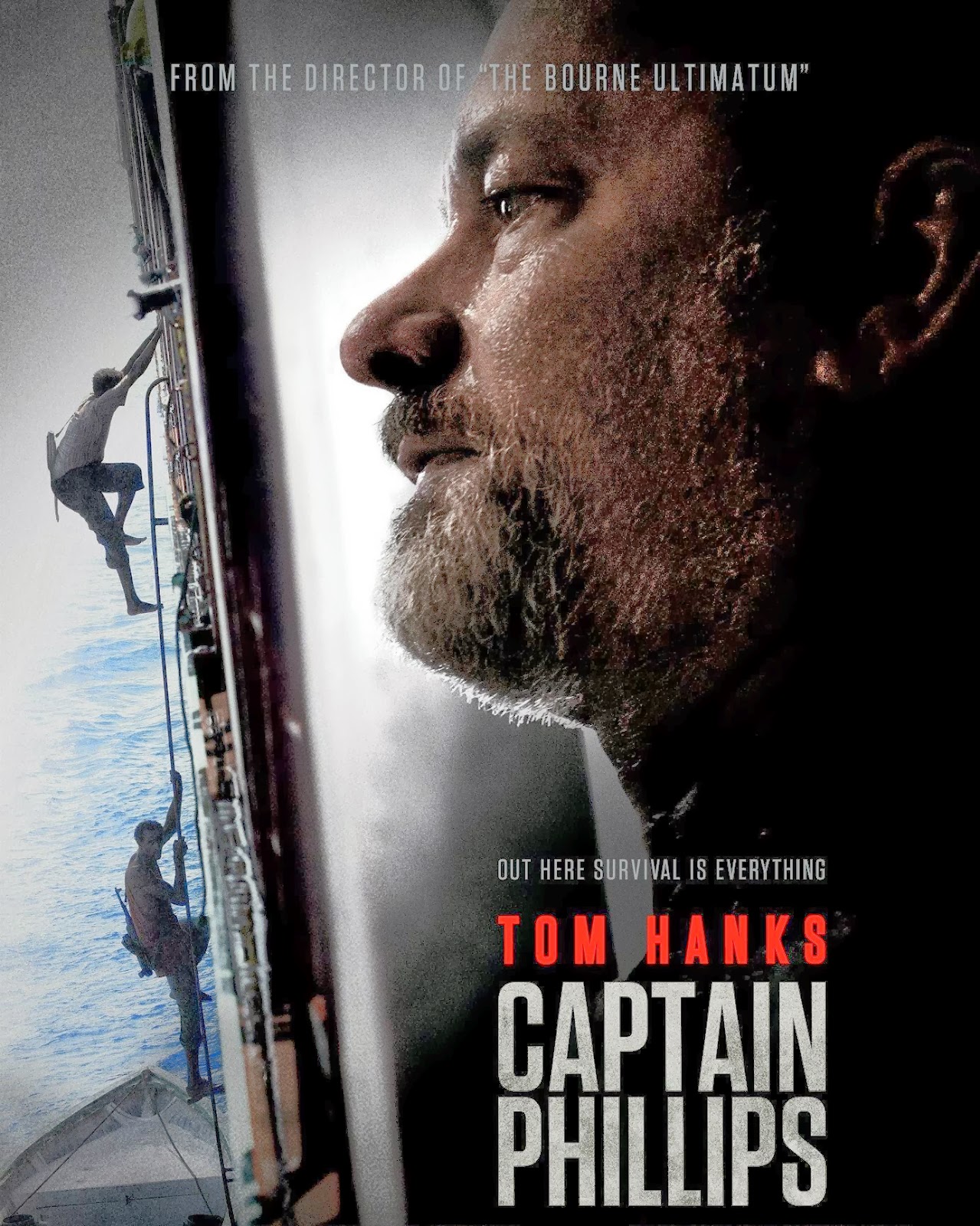 “Gravity”, “All Is Lost”, “12 Years a Slave” – 2013 has seen most marvelous survival movies from Hollywood. Another heart-tweaking survival saga, which deserves to be added to the list, is Paul Greengrass’s “Captain Philips.” The movie is about a Somali pirate attack (based on a true event, in 2009) on an American container ship. This dramatized true event is not just a suspenseful hijack thriller. It also hides different layers of thematic elements, which incorporates bigger economic and political factors. And, if you have seen Greengrass’ “United 93” – 9/11 hijack nightmare – “Bloody Sunday” or “Bourne Ultimatum”, you know what to expect: shaky camera work, shallow breathing, clenched teeth, and confrontation that is colossal. The principal explanation of why this movie works so well is the presence of Tom Hanks (his best role in a decade or so) and first-time actor Barkhad Abdi.

At the beginning, we See Richard Philips (Tom Hanks), a middle-aged captain, saying his good-byes to his wife and leaves the Vermont home, in late March 2009, to travel to Oman. In Oman, he takes charge of an immense cargo ship, “Maersk Alabama”, which sets its sail to travel around the horn of Africa to reach Kenya. The ship’s crew comprises of US citizens and with the escalating tensions, due to Somali pirates, they are extremely attentive to security matters. Meanwhile, in a Somali fishing village turned pirate city, a journey of different are being organized. The chief organizer of this group is a skinny Somali fisherman Muse (Barkhad Abdi). 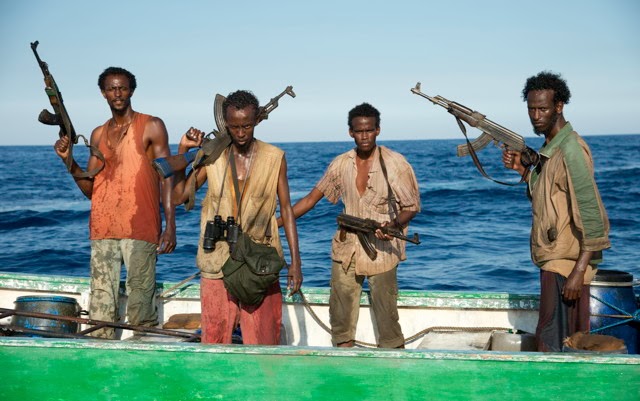 Muse belongs to the community, who is terrorized by local warlord. He has no choice, but to gather his troops and hijack some ship to demand ransom. Most of the money he acquires goes to the warlords or for buying guns. Muse was eagerly joined by 20 year old and teenagers. They take two small boats and travel some 200 kilometers to spot ‘Alabama.’  Philips and his crew elude the pirates in their first pass, but they board into the ship, the following day. The pirates have no sense of the ship and when they don’t find any of the crew to take hostage, their situations turns desperate. The crew surprisingly brings the pirates to a standstill, by capturing their leader, but in a turn of events, Captain Philips finds him inside an orange, ugly-duckling lifeboat as a hostage. The pirates steer the lifeboat to the nearest coast of Somalia and intends to demand $10 million from the company for Philips’ life. What unfolds from that point is an intensifying cat and mouse game.

Director Greengrass makes gripping thriller in an all-too-real settings. With “Captain Philips” he does it more effectively, by finding a middle ground, providing an edge-of-the-seat thriller as well as a moral depth to the proceedings. He makes subtle, apparent social commentary (about globalization, consumerism) that speaks very much to the viewer. He wonderfully sets up Muse’s back ground in that simple village scene. And, in the end, there is no sentimental moment in which the two men (Philips and Muse) understand each other. Greengrass’ hero, Philips, has the blandness of a common man. He isn’t into swashbuckling action set pieces or stirring speeches. The hero is just a quick-thinking character, who feels the trauma like every other captive. 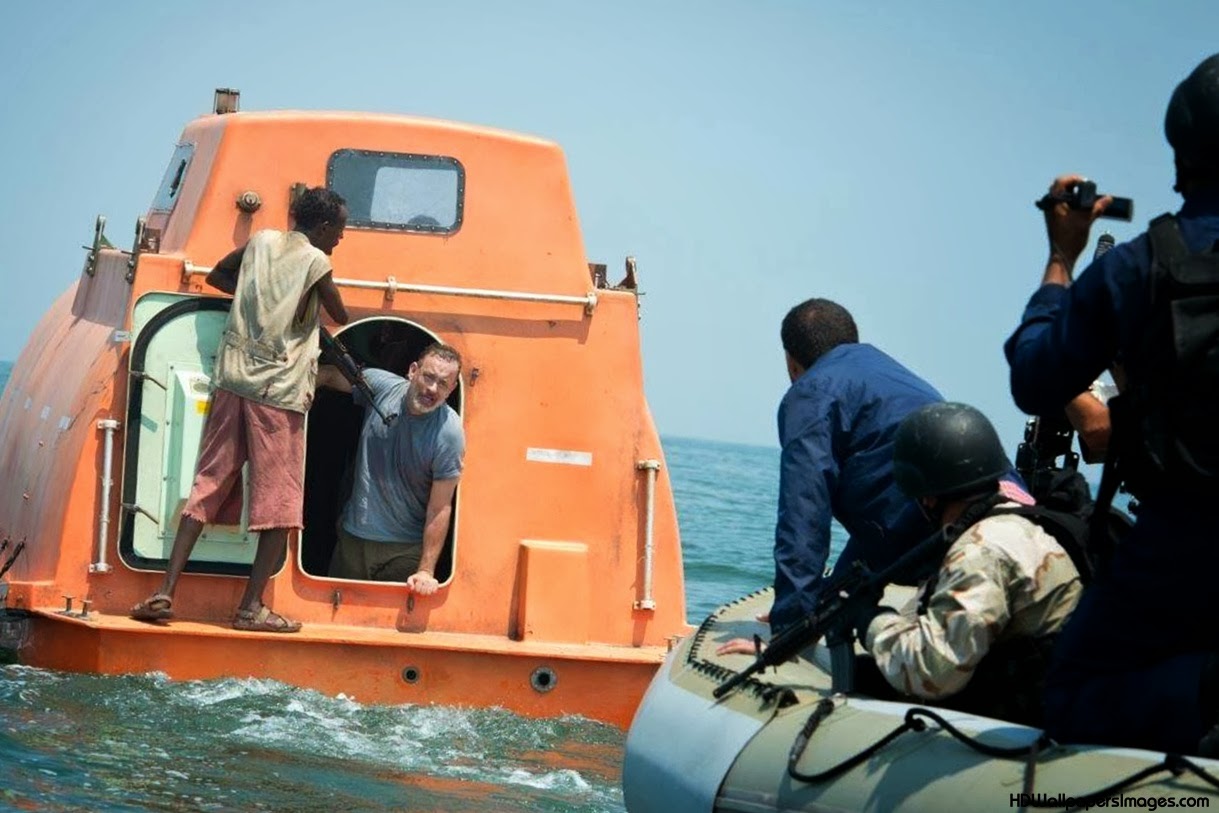 Script writer Billy Ray (“Shattered Glass”) builds genuine suspense, despite the fact that we know how this story ends. Ray and Greengrass don’t condone the piracy acts, but they definitely give us a crucial sense of why these men do what they do. "There's gotta be something other than being a fisherman or kidnapping people," says an exhausted Philips to Muse, for which, the Somali replies without missing a beat, "Maybe in America." In another instance, Muse speaks to SEALS commander: "Captain, relax, nobody gets hurt. No Al Qaeda here. Just business." Moments like this makes us ponder over that the pirates are as trapped as the hostages they procure. Greengrass’ ace cinematographer Barry Ackyord ratchets up the tension organically, without any manipulation. The customary hand-held was overused a bit in film’s early parts, but later they provide a nerve-gangling effect to the proceedings. HenryJackman’s electronic score for most of the action gives a pulsating experience.

Apart from “Cloud Atlas”, Tom Hanks has reveled in his iconic status without challenging himself. But, as Philips, Hanks not only excels in capturing the quiet authority of a captain or the overwhelming shock of a hostage, but also strips away all his overly dramatic acting style (for which he was cherished). Towards the ending, Hanks’ response to the attack and its aftermath -- wordless silence, delayed hysterical tears – is something we have never seen in a Hollywood hijack thriller. In that particular sequence, Greengrass and Hanks have dismantled the usual Hollywood macho heroism and gave us purely emotional moment, which was as shattering as the kinetic action moments. The first time actor Barkhad Abdi is a revelation as Muse, who as a small boy fled from Somalia with his parents and made his way into Minneapolis, USA. He is the perfect counterpart to Hanks. Throughout the movie, Hanks changes from being an authoritative to unfortunate person, while Abdi moves from being a stick figure to a guy full of bravado. And, at times Muse also comes off as a genuinely sympathetic guy.

It is true that lots of liberties were taken to build this terrific plot (in reality, Phillips took his craft within 240 miles of the Somali coast, despite a U.S. advisory to remain at least 600 miles offshore). But, the human element incorporated into this true event makes this film interesting and multidimensional. “Captain Philips” is not a hollow, patriotic propaganda movie (like the recent “Lone Survivor”). It sees over a dysfunctional world, where the everlasting poverty is going to be its new enemy (not terrorism). As Muse says: “Big ships come to our waters, take all the fish out. What is left for us to fish?”

at January 25, 2014
Email ThisBlogThis!Share to TwitterShare to FacebookShare to Pinterest
Labels: Based on True Story, Hollywood Movies, Survival Films, Thriller

Truly 2013 has been a great year for movies. Haven't seen this one, but after your review, it seems that I should.