Her -- Love and Relationship in the Advanced Era of iOS 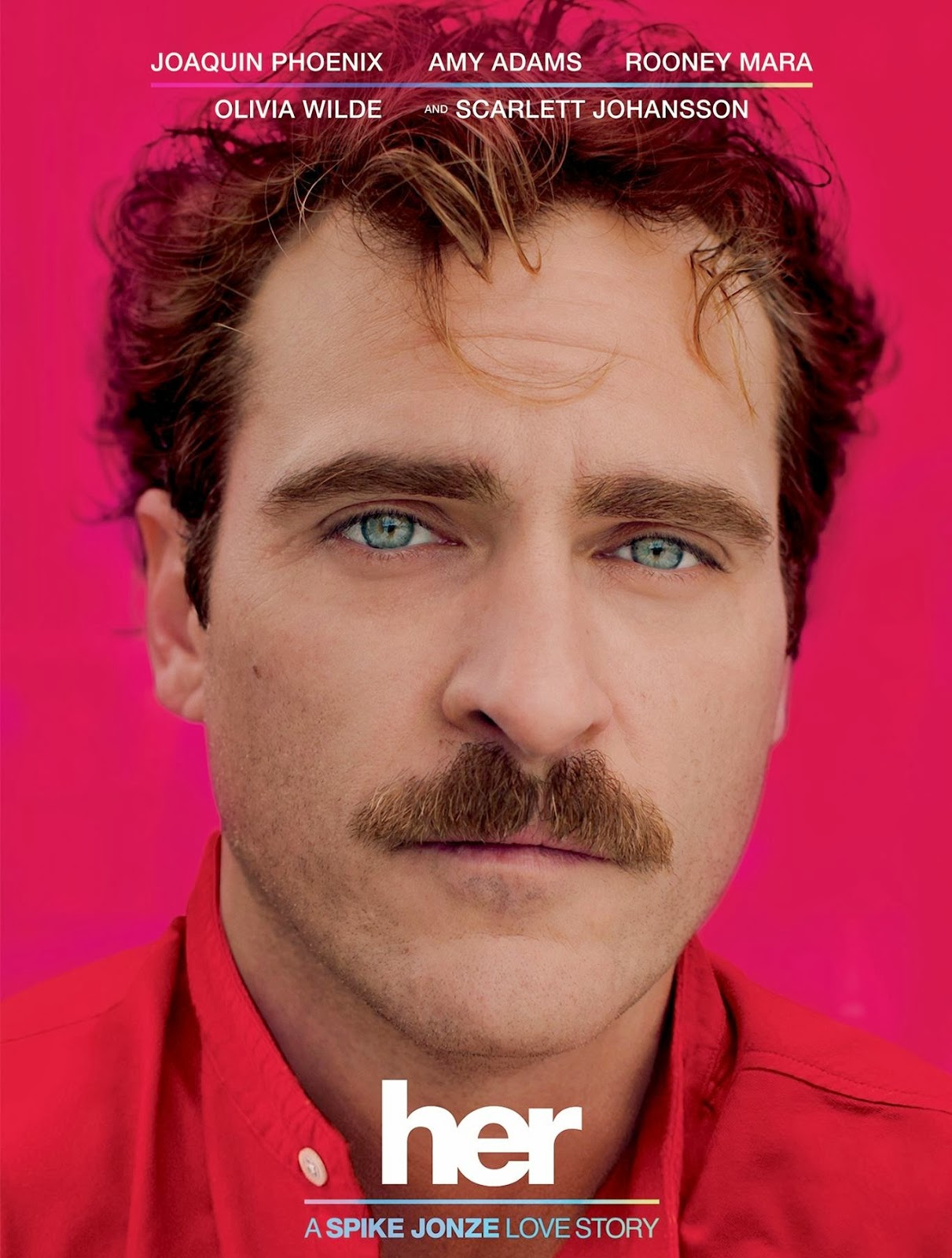 The highly ambitious film-maker Spike Jonze loves to disturb our peace and makes us asks questions for which there are no easy answers. His mind-blowing collaborations with writer Charlie Kaufman stooped after “Being John Malkovich” and “Adaptation”. So, for the last decade, except for the oft-kilter “Where Wild Things Are”, he has discontinued his film-career. However, now he is fiercely backed by a haunting iRomance (first movie Jonze written on his own). “Her” – Jonze’s exploration of machine sentience – is a beautiful, economic sci-fi movie, which investigates a philosophical ambition, rarely found in big-budgeted sci-fi: How are we and our relationships changing, in accordance with the technology?

“Her” opens with a man dictating a letter to his computer. The words that come out of his mouth seem to be passionate and sincere. But, how could this guy in his 30’s write a letter for a golden anniversary. At that point, the camera pulls backward to take us through a roomful of workers, dictating similar heartfelt letters, in a sleek, multicolored office. A phone ring and is answered as ‘Beautifulhandwrittenletters.com.’ The story happens in the near-future in some unnamed metropolis, where everyone seems adrift and comforted only by their virtual pals. The guy whom we first saw is Theodore Twombly (Joaquin Phoenix), a soft-spoken man. His job is to craft the lost art of letter writing. He is been writing letters for many years that he knows the recipients’ characters very well. But, Theodore is a very lonely guy. His awkward separation with his wife, Catherine (Rooney Mara) has left him uncertain. 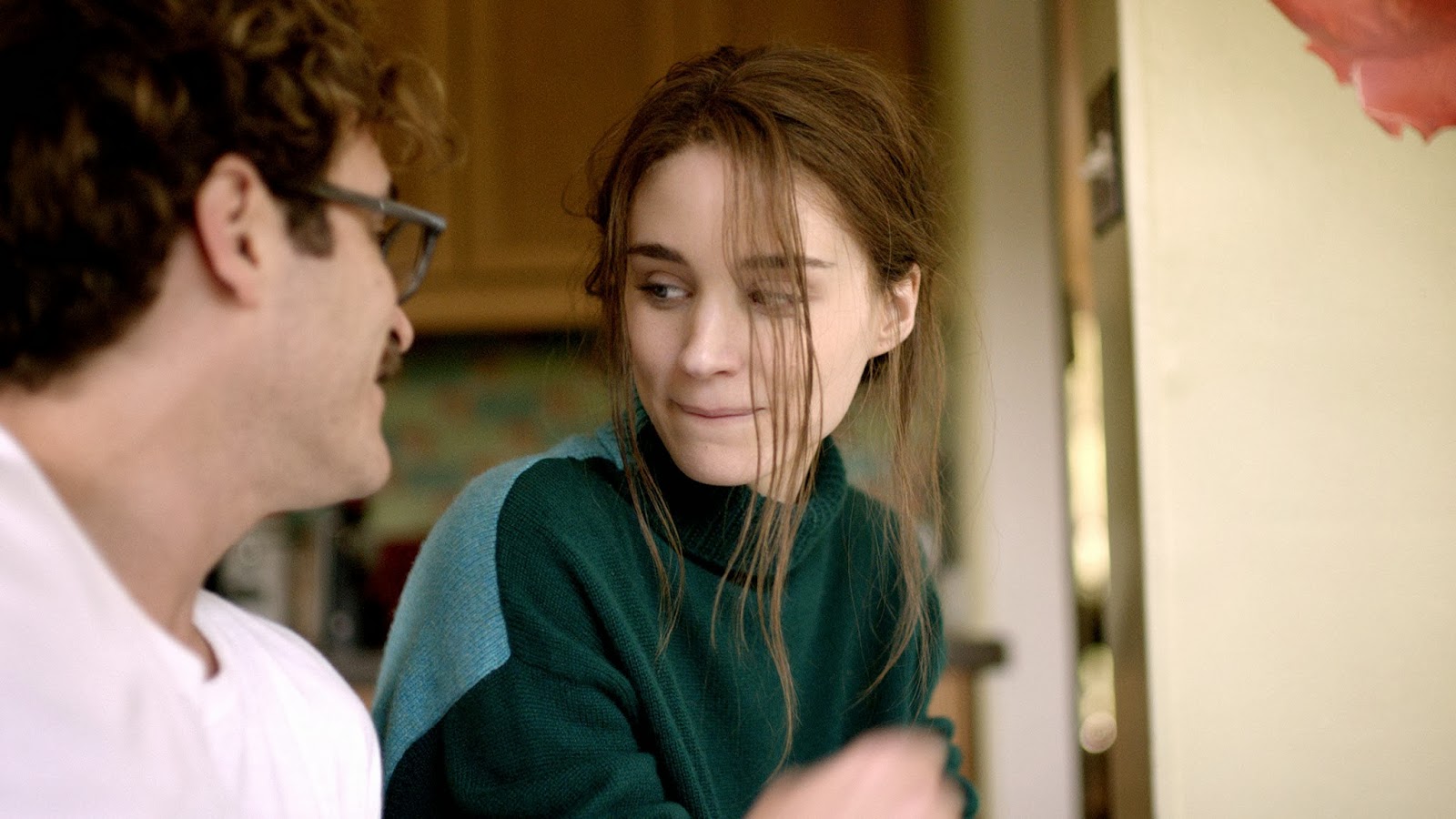 Theodore doesn’t spend time with his best friends too: Amy (Amy Adams) -- a video-game designer and wanna be documentary film-maker – and Charles (Matt Letscher). This new companionship-looking guy finally gets a break when he buys a breakthrough computer operating system named ‘OS1.’ After few preliminary questions, an alluring female voice (of Scarlett Johansson’s) speaks into Theodore’s wireless earpiece with a casualness that contradicts its digital origin. When Theo asks what her name is, the OS reads a baby naming book in a millisecond and answers “Samantha.” She starts as a helpmate by organizing Theodore’s inbox and even laughs at the jokes inside his old e-mails. She guides him through the 3-D adventure game and talks him to sleep, slowly becoming a soul-mate. However, Theodore real life doesn’t look better.

The dating Samantha sets him up for ends up in suspiciousness and yelling. He also constantly mourns for his lost marriage. Theodore takes late night outings with a monitor propped in his pocket, camera side out, so that Samantha can watch. The mutual sharing and all the flirtations eventually makes him fall in love with his operating system. How does Theodore find bliss in a relationship, where he can never touch the entity? And what does ‘love’ means to an OS? Questions are raised without judging the inherent nature of this unconventional relationship. Spike Jonze’s vision doesn’t fixate the end of human-to-human relationship. He is also not imposing misogynistic views or celebrating the life of lonely guys. He just brings out an odd as well as a sad love story, which ponders over technology as a catalyst for social loneliness. Even this odd couple has the same difficulty all kind of lovers has, getting it right. They grow towards each other and then away as Samantha is something Theo wishes she was. Jonze’s script doesn’t try to mock the protagonist for being so detached from the human experience. He brings this ‘non-standard’ relationship similar to that of mixed-race, homosexual, etc. So, some of them freak out (calling him ‘weird’) after hearing about Theodore and his OS, while some others treat it as if there is nothing wrong with it. Jonze also deals with the impersonalization of all the personal things. In the first frame, you could see Theodore uttering, "I've been thinking of telling you how much you mean to me" – a genuine feeling dictated to a computer by a third person. In one of the scenes, Theodore asks his lonely game-designer friend, Amy “Am I in this because I’m not strong enough for a real relationship?” “Is it not real”, Amy asks him. It is the existence of these questions and the absence of any ready-made answers makes Jonze’s singular vision look colorful. 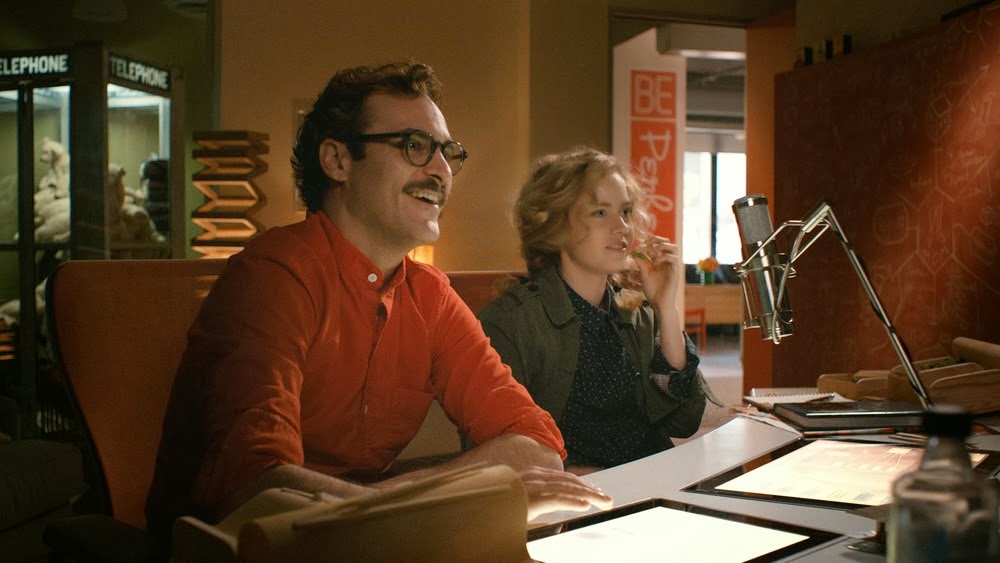 Jonze’s directorial style is contemplative, lingers long enough and talky, as you can’t expect anything different, especially when your lead spends his time talking with a voice. He creates a realistic future society without pushing the futurism to a stalemate. The meticulously imagined color schemes of Jonze and cinematographer Hoyte Van Hoytema creates an immersive universe, full of Valentine’s-heart reds and plain-vanilla tones. Much of the shooting took place in bits of the real Los Angeles and in Shanghai's new purpose-built Pudong district.

Joaquin Phoenix is at his strongest, when he plays the ‘poor soul’ role. Last year he marvelously inhabited the role of Freddie Quell in “The Master” and with “Her”, he once again ventures into an odd role and ends up with another convincing performance. For a large part of the movie, Phoenix is onscreen by himself, lost in his thoughts and giggling at his Os’ jokes. In all those moments, he authentically looks like a vulnerable man, whose emotionally arrested development can eventually weigh him down. Amy Adams plays a small part as the nerdy and misunderstood girl. Even so, her part is the emotional central of the movie, which prevents this fable of a human-machine love affair from drifting off fully into the digital. Like “2001 Space Odyssey’s” HAL 9000, Johansson’s Samantha seems to be a complex character. The witty and velvety human-sounding voice successfully brings a new person to life, whose warmth and joy are infectious.

Jonze’s “Her” (125 minutes) remains emotionally genuine and never underestimates the viewer’s intelligence. It is not a grand social satire. It just tracks the way we throw ourselves at our devices and how we may truly live in the future. It is also a rare futuristic movie, where the digital beings seem as touchingly confused as the humans.