American Hustle -- Caper Comdey Set in the Era of Excess 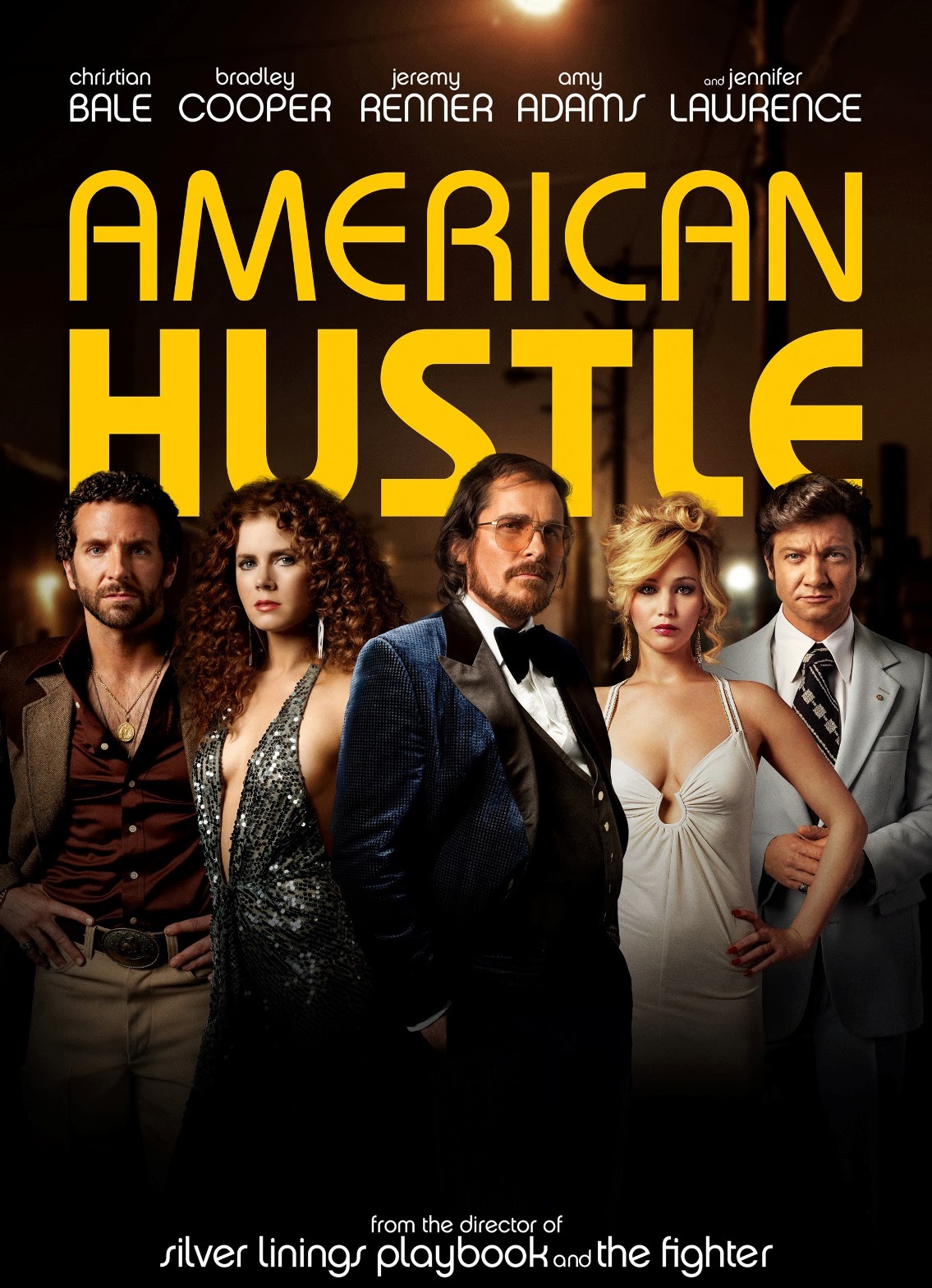 Director David O. Russell has this flair for playing around with classic Hollywood genres: war in “Three Kings”; melodrama and sports in “The Fighter”; oddball comedy in “Silver Linings Playbook”; and, now he once again comes up with a hyper-kinetic film about the con men of 70’s in his “American Hustle” (2013). It claims that ‘some of this really happened’, especially to give an historical perspective to this crime cinema. It’s also a playful trick -- like the one used by Coen brothers in “Fargo” -- to entice anyone, who demands facts from films set in historical reality. The con we are dealing here is the ‘Abscam’ FBI sting operation of the 1970’s, where they nabbed seven members of Congress (on video) for taking bribes. From artificial hairs to atrociously plunging necklines, “American Hustle” contains plenty of artifices, but within this excessive 70’s era, there is some truth and honesty, which, both the con men and a viewer can’t really resist.

The film opens with Irving Rosenfeld (Christian Bale), arduously piecing his hairpiece in a luxury suite at Plaza Hotel (in Mahattan) before going on an attempt to bribe the mayor Carmine Polito (Jeremy Renner). At this point, we quickly see the Bronx-born con artists history. Irving runs a string of dry cleaning stores and also indulges himself with art forgery and personal loan scams. His love and crime partner is Sydney Prosser (Amy Adams). She was a stripper, but fakes a British accent to become ‘Lady Edith’, an English noblewoman, just for the elaborate conning schemes of Irving. Plus, Irving has a wife named Rosalyn (Jennifer Lawrence) and has adopted her son. She is a wild, uncaring type, who makes an entrance by nearly setting the family home aflame by falling asleep under a sunlamp. 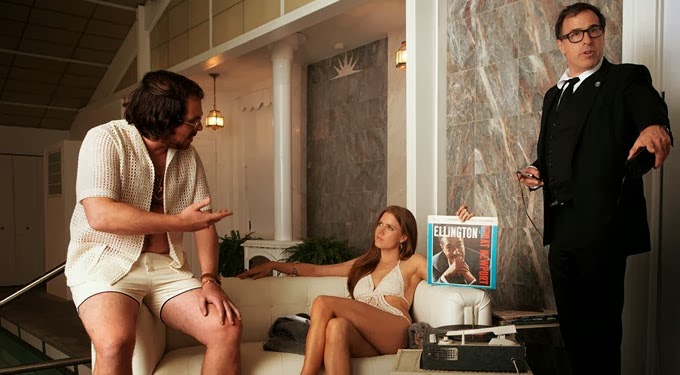 The fabulous love and con life of Irving is rattled by a loose-cannon FBI agent Richie DiMaso (Bradley Cooper). He forces them to do a white-collar crime sting until they snare him a bigger fish. One of the bigger fish is the mayor Carmine Polito, whose construction plans for Atlantic City casinos inevitably, brings in the mafia and politicians. The team uses a Mexican-American FBI agent (Michael Pena) as Arab Sheikh for this ensnaring scheme. As the con moves forward, a change could felt in the characters’ inner selves especially that of DiMaso, who gets ready to cheat on his fiancee, abuses his superior and is, determined to do anything to get ahead. 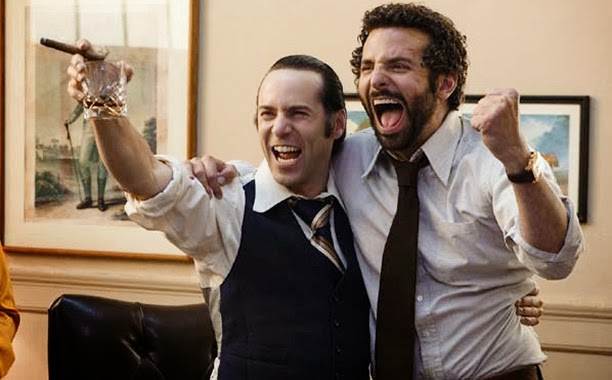 Bale drops his superhero mannerisms and gains a lot of pounds to play the pot-bellied Irving. It is appalling to see Irving showing a fundamental conscience, but Bale somehow plays it in a matured manner. As Sydney, Amy Adams (known for next-door girl roles) with her low-cut dresses plays the toughest role in her career. Cooper is stuck with the least likeable role, but keeps finding brilliant little bits of scenes, where he mocks and teases his overly cautious boss. Jennifer Lawrence (once again does the part of older girl) plays both the liveliest and depressed character of the film. Her motor mouth role is something we often see in a Scorsese movie. Jeremy Renner brings a boyish charm to the role of mayor. He is the most sincere character in the film, even though he bends few laws for the sake of Atlantic City. De Niro looks gleefully menacing in the uncredited cameo. 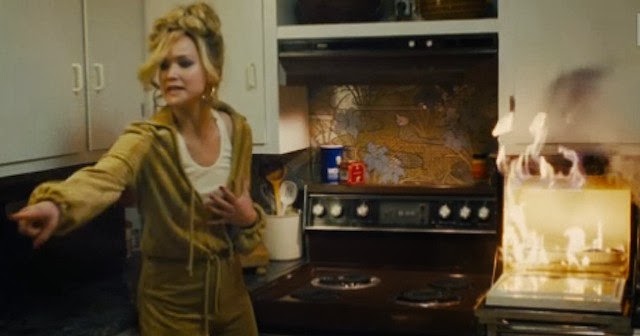 The script (by Eric Singer and Russell) on a scene-by-scene basis looks impressive, although the whole procedure seems like a toned-down version of Scorsese’s gangster sags. Linus Sandgren’s camera prowls through ’70s luxury hotels and suburban homes just like in “Casino” and “Goodfellas.” You could either call these homage or explicit evocation. The narrative convolutions don’t maintain that exhilarating feel, but the script only aims at a character study. The razzle-dazzles of pulling a con may indicate the American dream, which is like the character’s soul -- a colorful but a meaningless shell. If you are expecting some condemnation of this no do-gooders, there is actually none. Indeed, the ending showcases that murderous Mafia bosses are more honest and admirable here than the FBI sting operatives. May be, Russell is questioning the overreaching arms of law enforcement or he is trying to blur the line between good and bad.


“American Hustle” is an entertaining off-beat caper comedy. The hustles are predictable and don’t add up to anything complicated, but at the same time, it’s a funny take on badly behaving people.

Rated R for pervasive language, some sexual content and brief violence
at January 09, 2014
Email ThisBlogThis!Share to TwitterShare to FacebookShare to Pinterest
Labels: Based on True Story

Nice review..will watch it for sure..