Mandela: Long Walk to Freedom -- An Introductory and Balanced Portrait of a Natural Leader 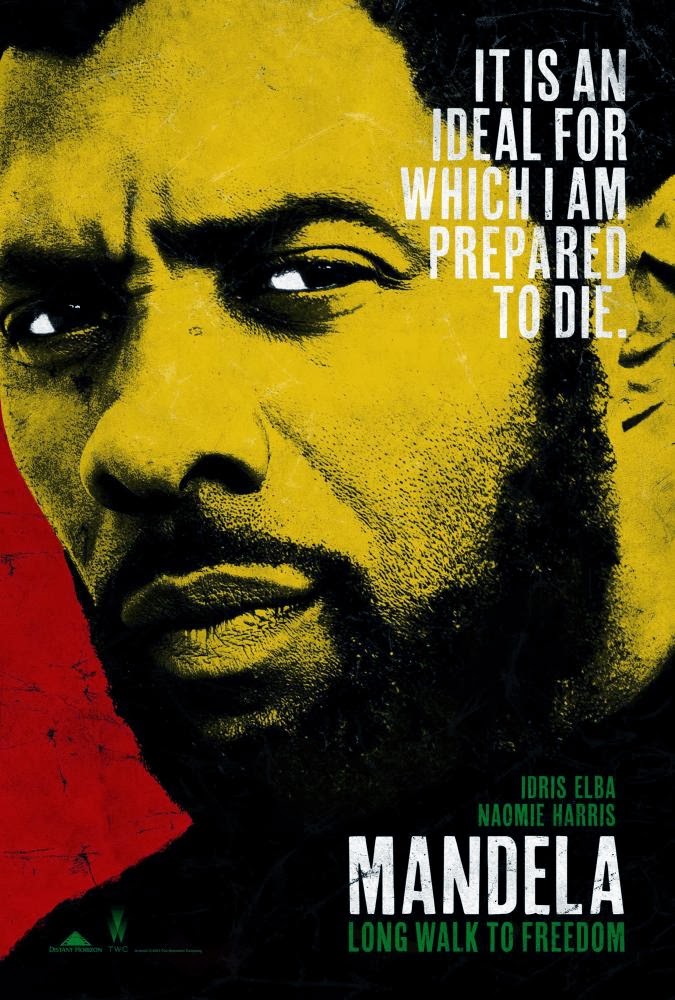 It’s not an easy task to make a biopic about a legend. You need to flatten the legend’s life to fit to the screen. Then, he/she must be transferred to custom-made film hero, which might demand some gaps in their life. The end result might be like an introductory textbook for the unknowns rather than an insightful examination of a famous and remarkable life. The story of iconic South African leader and anti-apartheid revolutionary, Mr. Nelson Mandela was brought out by Justin Chadwick’s “Mandela: Long Walk to Freedom” (2013) and as usual it follows the myth-making tropes. Even a 135 minute running time is not enough to portray this icon’s 95 year life. So, at times, we get a feeling that it leaps from one event to the next too swiftly without making much of an emotional impact. However, problems aside, this Mandela biopic is the best of the lot, since it finds a right actor, who imparts the legend’s passionate commitment and dignity.

Indian-born South African, Mr. Anant Singh set out to produce Mandela’s 700+ pages memoir, 25 years ago, back in the late 1980’s. But, he encountered difficulties financially and was limited to apply the biopic treatment, whose fame already presided over the global imagination. After lot of scrutiny, writer William Nicholson and director Chadwick has pushed five decades of South African history and Mandela’s life through the filters to portray the historical hero in a slick and efficient way. The movie opens with slow-motion images, which briefly glimpses Mandela’s boyhood. Children are running in a village across a wheat field at dusk. They are about to go through a ritual in which teenage boys (one of them Mandela) become men. Few minute later, the story shifts to 1942, where Mandela works as a lawyer. He sets his mind to fight against a imbalanced, racist legal system. 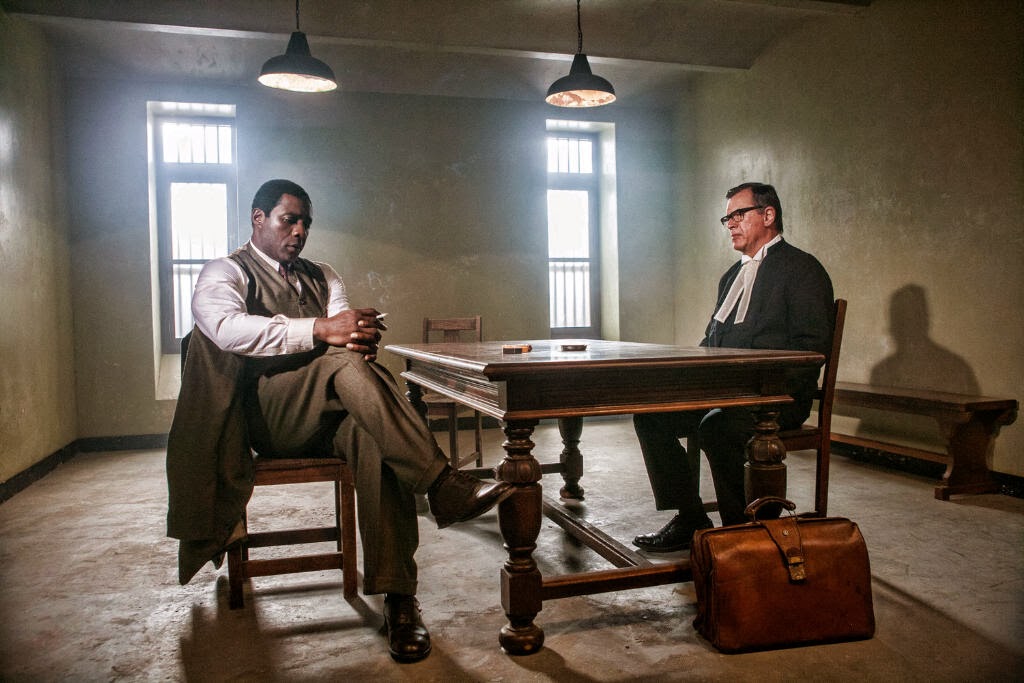 He finds some support from the compatriots in emerging African National Congress (ANC). He joins and recruits others for the resistance movement to challenge the white apartheid rule. After his fractious first marriage, Mandela falls in love and marries ANC’s social worker, Winnie Madikizela (Naomie Harris). The movie’s next act is dedicated to Mandela’s 27 year prison time (for sabotage). In his mid-40’s, on Robben Island, he is forced to wear short pants and did hard manual labor. The script moves through his prison time faster, picking some humanizing moments (like the successful campaign for the prisoners to be given long pants) to keep away from the worshiping tone. The final act covers Mandela’s wary reunion with Winnie, who herself has become a militant with no interest in the reconciliation of the races. The rift in their relationship deserves a lot of time, but since the movie has so many things to cover, it quickly lurches to other events. 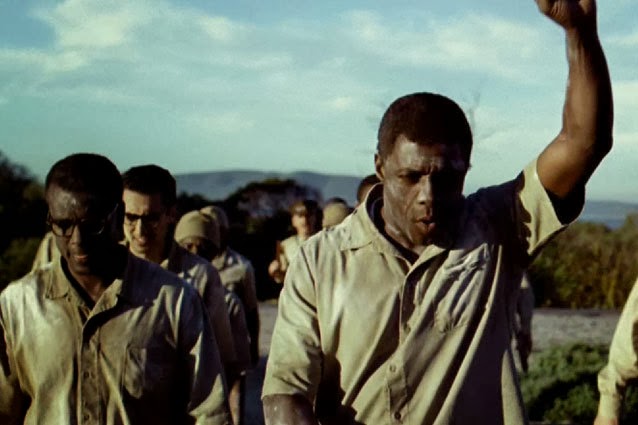 “Long Walk to Freedom” is not a hagiography of Mandela. It depicts the ladies’ man side of him. He casually cheats on his first wife, abandons his son, later destroying the marriage. Considerable weight was also given on his sudden embrace of guerilla warfare, even though he knows that there’s a cost to the violence he perpetrates. "You alone are small; your people are mighty"; “We cannot win a war, but we can win an election” – lines like these from writer Nicholson resound beautifully on-screen. Chadwick heavily dramatizes many events, neglecting lighter touches. Nonetheless, there are some moments, which squash aesthetic overkill sequences. One is the glimpse he gets of his daughter Zindzi, another is the long walk Mandela took n February 1990, when he emerged from a small warder’s house, free at last. 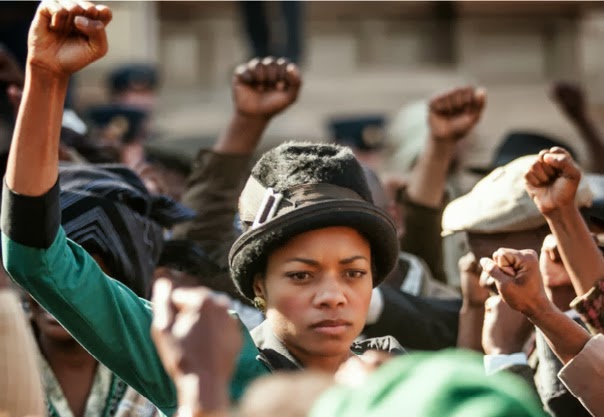 Idris Elba doesn’t look like Mandela at all. He is heavily muscular, but he retains same sharp, hyper-alert gaze, which looked all the horrors and eventually turned him into a humanitarian ideal. Despite a crafty makeup, Elba wears Mandela's secret look and connects to a layer inside this complex figure. In the moments of sorrow, his face reflects a bone-deep anguish. The way Elba carries himself in the prison scenes gives a crucial human dimension to this streamlined epic story. Naomie Harris channels her fire cracking energy to play the revolutionary, Winnie. After Winnie’s solitary confinement for 17 months, she was released. In the following scene, Winnie tells her supporters and press that she is no longer afraid of anything. The emotion and look she conveys through her eyes makes us believe in her words. Her radicalized viewpoints are the finer moments of “Mandela”, but a thinly drawn script jumps to chaos and arrests, leaving out this dynamic character.

The intentions of making “Mandela: Long Walk to Freedom” are noble and the overall effect is inspiring and enlightening, but it also jumps quickly between events, just to tick off all the milestones of a monumental life.

I hold immense respect for Mr. Mandela and this seems to be worth a watch. It goes on the list. Thank you for sharing. :)