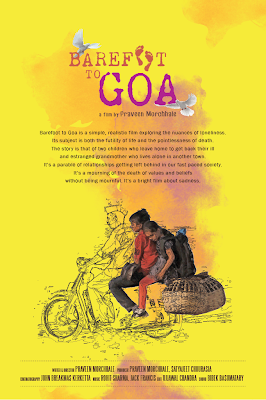 The Indian family structure is very unique. Some see it as an entrapment, while some ascertain that it is the best means to attain spiritual merit. The families have strong ties of affection. The women share their domestic responsibilities, whereas men provide the shared income. In this patriarch family tree, oldest male is the spearhead and he calls the shots. A girl’s fate in this system is different. Once married off, they become part of their husband’s household, relieved from the task of supporting their parents. The nuclear family, drenched in traditions and values has its own set of merits and de-merits. However, this system has nullified the word called ‘loneliness.’ Especially, the children never feel the lack of love, since the Grandparents shower them with affection. Praveen Morchhale’s debut film “Barefoot to Goa” (2013) welcomes us to modern, upper-middle class India, where there is lot of space for materials than for human beings.

“Barefoot to Goa” belongs to this year’s list of small-budgeted, big-hearted movies (“Ship of Theseus”, “Lunchbox”, “Lucia”).  This nuanced tale about two siblings is a road movie as well as an illustration of the huge differences between urban and rural India. 11 year old, Prakhar and 9 year old Diya are living among the concrete jungle in Mumbai. The children’s sick grandmother is living in Goa. She writes letters and sends sweets but her brooding daughter-in-law keeps it away from children and her husband. One day, Diya finds out her grandmother’s letter. After reading about granny’s lung cancer, they try to convey the message to work-obsessed father. But, he has no time to listen to them and soon flies overseas. The innocent siblings hatch a plan to travel to Goa and bring back their Grandmother to Mumbai. The children travel by various means (train, motorbike, bus, cart, and lorry) through open fields and even get a chance to stare at the starry sky. They also taste unbridled rural hospitality.

In movies, we can understand a lot through silence. However, Indian cinema has this habit of filling the screen with dull dialogues; totally neglecting the fact that cinema is a visual medium. Director Praveen Morchhale expertly uses the silence. Diya and Prakhar exhibit a lot of emotions in the hushed up scenarios. The director takes up a viewpoint of a stranger, where he just conjures up the images of frenzied urban lifestyle and leisurely paced rural lifestyle. The social context isn’t subdued but at the same time, the film refrain itself from giving long sermons on the decaying family values of Indian society.

Within an 80 minute movie, Morchhale subtly brings out many of our societies rarities: the truck drivers and farmers’ temperament; police officers’ lethargy in taking the complaints for missing kids and their bribe-demanding nature, even if all the papers for a vehicle are perfect. “Barefoot to Goa” exhibits a lot of deep running emotions through materials: we see the father reading a book and the house riddled with valued-volumes, but still he is totally clueless about his mother; the dark, abandoned well  displays a sense of loss and the sweet showcases the strong bond between the young and old generation.

John Kerketta’s gorgeous cinematography is a treat for the eyes: the reddish sunset, lush green fields and dusty brown villages. Morchhale’ cast is effective and their acting, faultless. The two child actors portray their loneliness through utmost silence and exude charm, which is reminiscent of the child performers of Iranian new wave cinema.

“Barefoot to Goa” is a beacon among the loud, mainstream Bollywood fares. What happened to the children at the end? How did they get back to Mumbai? The film isn’t concerned about giving answers. It raises powerful questions and leaves the answers to viewers.  Take this journey with utmost patience and attentive mind.

wow.. what an interesting plot. .thanks for writing this up.. Where can I watch this movie?

Firstly, I must congratulate you for writing another brilliant film critique, one that does full justice to the movie. Once again your pithy and deeply evocative film analysis manages to capture the essence of the movie it aims to explore, assess and dissect. Also, I must thank you for choosing to review it on your film blog.

Please do take some time out to checkout my review of Barefoot to Goa, if you haven't already:

@ Vivek, Thanks for the comment. The movie will release soon.

@ Murtaza Ali, Thanks for the comment. This is one of the rare Indian cinema with a good amount of symbolism and silence. Will definitely read your review.