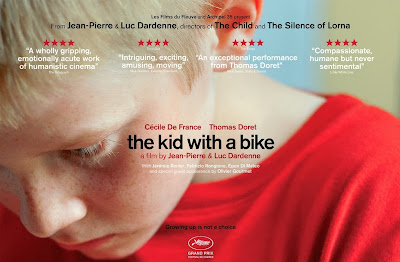 The Belgium director duos, Jean Pierre and Luc Dardenne (known as ‘Dardenne brothers’) are known for their low-budget, social-realist dramas. Their movies often combine humane, empathetic tales with a deadpan style of a documentary. Belgium’s underclass people are often focused through their lean, elegant and often haunting fables. And for the most part, Dardenne’ concentrate on rebellious or angry young people, who find it a struggle to survive. “Rosetta”, “The Son”, “The Child”, “Lorna’s Silence” – all of these films has juveniles desperately attempting to live and often weighed down by dire circumstances.

Dardenne’s unadorned and elliptical storytelling method owes a lot to Italian Neo-realist movement. Like those classics, their films see the possibility redemption, even in the cruelest of circumstances. However, even the Palme d’Or winning flicks of Dardenne brothers might seem to sound like non-entertaining and medicinal. You will get their views only after watching it. If you want a more accessible or brighter story to get inside the world of Dardenne brothers, then you must start with “The Kid with a Bike” (2011). The kid in the title is a 11 year old boy, whose never-smiling face illuminates after meeting a guardian angel. 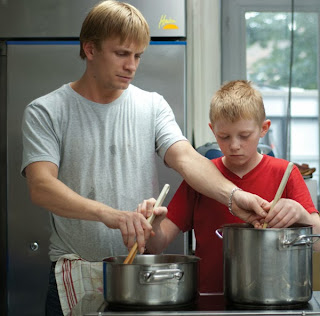 Cyril (Thomas Doret) is a desperate, unruly 11 year motherless boy. He lives in an orphanage. He has a perfectly healthy father (Jeremie Renier). However, his father won’t or can’t face up to single parenthood. Cyril’s attempt at connecting with his father fails, since he can’t reach him by phone. A small investigation leads Cyril to discover that his father has moved out of his old place and has even sold his favorite bike. Cyril can’t believe that he has been abandoned and so he hangs around his father former apartment.

When the youth counselors comes searching for Cyril he hides in a doctor’s office. There, he clings to a woman in an effort to keep the foster home counselors from taking him back. The woman is Samantha (Cecile deFrance), a single and childless hair-dresser, who feels pity to this troubled boy's cry for help. Samantha agrees to become the boy’s foster mother and the orphanage allows Cyril to stay with her on weekends. She locates the boy’s bike and tries to track down his father. Despite Samantha’s merciful acts, Cyril’s desire for a male figure to look up to leads him into a friendship with Wes (EgonDi Mateo), a foxy teenage gangster. 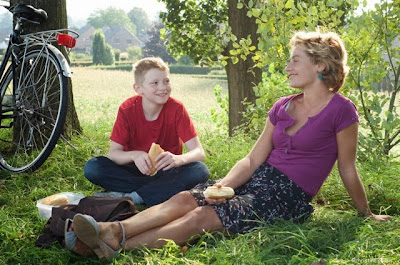 The handheld intimacy and unprettied realism of Dardenne brothers’ camera makes us fear greatly for Cyril’s future. This naturalistic set up makes us want to look away when the boy makes terrible choices by latching onto those who would hurt him. Unlike, Hollywood’s young adult, the director duos only stay in the present. There is no back story and psychological perspective. Why a single, middle-class hairdresser suddenly has an interest in parenting? Why does the boy have a hard time in facing Samantha’s compassion? Or why doesn’t he feel hatred towards his father, who has even sold his favorite bike? These questions are never answered. It is rather interested in the activities of Cyril and Samantha, only at present.

The father’s act of abandonment is expressed symbolically through the selling of his bicycle. So, the act of finding the bike by Samantha is another symbolic gesture of a new parenthood. Literally as well as figuratively, the bicycle remains as a central character like Vittoria de Sica’s neo-realist classic “Bicycle Thieves” (1948). The boy’s situation is bleak, but Dardenne’ have infused optimism through their soft touches. The unexpectedly beautiful symphony music and the change of new season (mild summer) in the end (when Cyril rides his bike) seem to bathe a viewer with hope and comfort. 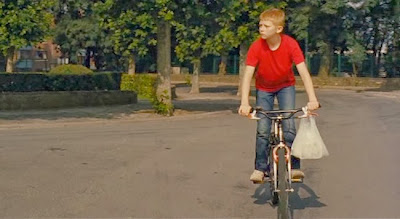 The completely unknown kid, Thomas Doret, gives an utterly convincing performance as Cyril. The genuine face of the kid makes us recognize the desperate cry for help. The Dardenne brothers’ direction of the kid is so masterful comparable to that of Truffaut, Spielberg and the new wave Iranian directors. The beautiful Belgian actress Cecile de France embodies a down-to-earth goodness as Samantha. Her characters’ temperament to endure Cyril’s bad behavior is admirable rather than being questionable.

“The Kid with a Bike”, devoid of any sentimental gimmicks, stands as a testament to love’s abiding power and the inevitability to which we are all exposed.

The Kid with a Bike -- IMDb