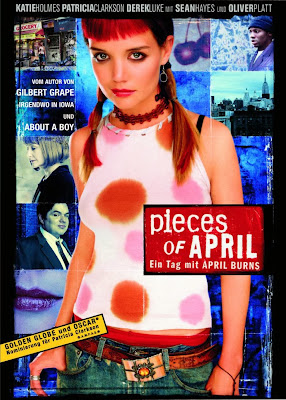 Screenwriter and novelist Peter Hedges’ directorial debut, “Pieces of April” (2003) takes a dysfunctional family and makes it endure a holiday tradition (Thanksgiving). This is not an easy task, since the film has to find some middle ground between comedy and hard-hitting drama. In that way, Hedges succeeds and this Thanksgiving family reunion drama has a genuine heart and original characters. The whole movie takes place within a day, but makes us come across themes of terminal illness, nostalgic moments and the need to mend old wounds.

April Burns (Katie Holmes) lives with her African-American boyfriend, Bobby (Derek Luke) in a dismal apartment. She remains estranged from her family due to the grievous relationship she has had with her mother, Joy (Patricia Clarkson). Joy is suffering through the final stages of breast cancer and so the dad and April feels the need to reconcile. She invites her family for Thanksgiving. Trouble is, April has never prepared such a feast before and the family doesn’t know about the grimy neighborhood or about her new boyfriend. 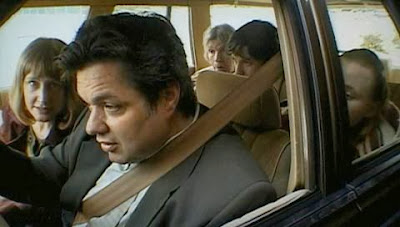 Jim (Oliver Platt), the well-meaning husband of Joy is willing to give April a second chance. Joy dreads all those dreadful encounters she had with her erratic daughter. Joining them in their trip are the self-righteous daughter, Beth (Allison Pill), pothead son Timmy (John GallagherJr.) and senile but affectionate grandmother (Alice Drummond) (who is picked up from a nursing home). Getting into the car, Jim declares, “We're going to have a nice time." He recalls that April has left her drug-dealer boyfriend and is trying hard to makeup. However, when April takes the turkey and puts it into oven, everything goes wrong.

Peter Hedges brings in the contrasting differences between two lifestyles with subtlety. April’s apartment peoples are stereotypical – which includes the usual diverse races – but the way those characters are weaved is quite an achievement. The good-humored, middle-aged black couples (Lillias White, Isiah Whitlock), in the downstairs apartment; the stuck-up ‘5D’ apartment owner, Wayne (Sean Hayes) who has a new deluxe oven; the vegetarian, who can’t stand the smell of burning flesh; and the affectionate Chinese family are all important characters, written to rise away from the conventional conception. The Burns’ family is not a perfect candidate for saints. They have also made mistakes. Even their sterile-white house looks frozen, lifeless and as if it hasn’t changed for decades. A viewer might feel for the terminally ill Joy, but she exhibits meanness to her older daughter. She urges her family to fill up on doughnuts and gives them advice on how to throw-up, so they don't have to eat her cooking. 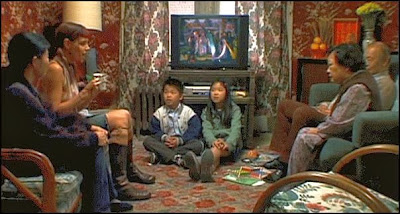 Peter Hedges worked on the scripts of “What’s eating Gilbert Grape” (he also wrote the novel) and “About a Boy.” These exceptional works should have made him realize as how characterizations are important to the plot. Hedges have chosen the lighter tone, instead of dark tone – usually inherent in dysfunctional family dramas -- because he wants a high emotional payoff at the end. When the Turkey is cooking inside the oven of Chinese family, April tells them the story behind ‘Thanksgiving.’ That scene points out, how everyone needs each other and also makes us think whether Joy and April will be able to see each other. The highly satisfying final act avoids the overly sweet reconciliation, but it is filled with gratitude and magical moments. Hedges has chosen digital video medium to make this story (shot in 16 days). This adds a certain tension to the proceedings and takes us closer to this effective personal story. 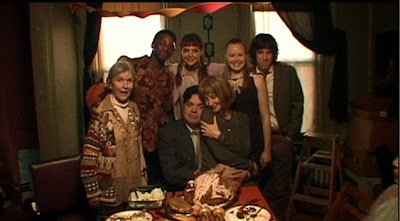 Hedges have amassed such an excellent ensemble. Katie Holmes, in one of her best performances, has balanced her characters’ edges by keeping an indifferent composure but subtly exhibits her damaged inner soul. With smudged eyeliner and magenta hair, she makes us feel the higher stakes that is involved in this family feast. Indie favorite Patricia Clarkson anchors the dry humor in the film. Through her vulnerability and sorrow, she pushes the movie without getting into the sentimental swamp. Oliver Platt – one of the best character artist – wonderfully performs as the steadying force of the family, while tunneling in all his sadness.

With a running time of 81 mins, “Pieces of April” is eventually a tear-jerker, but works hard at getting those tears. It isn’t unnecessarily sentimental and contrived. It is a picture about love bringing in glimmers of hope.

I have not seen this one and after reading your post this one goes in my list :)

Seems interesting ! The stories where people from different races and backgrounds get thrown together with their prejudices surfacing to the fore, are always interesting and at the hands of an able director, they become masterpieces.

Btw, Have you seen an old one - Guess who's coming for dinner ?

@ themoonstone, Thanks for the comment. "Guess who's coming for dinner?" is a classic movie with an excellent cast and one of the first films to deal with interracial marriage.