Pieta -- The Devil's Pursuit for Money 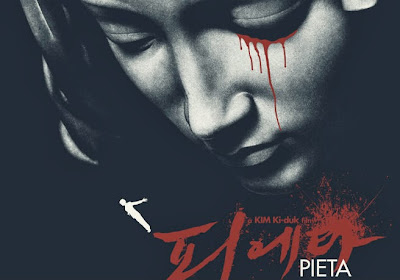 Winner of the ‘Golden Lion’ at Venice Film Festival, South Korean auteur Kim Ki-duk’s 18th film “Pieta” (2012) is an unpleasant journey into the life of a sociopath. It is an infuriating tale about the capitalism’s wreckage. Kim Ki-duk is one of the best contemporary directors to balance both the style and content. Most of his movies have a serene, reflective style (“3 Iron”, “spring, summer….”) and implies butchery or violence, only off-screen. His movies have vile or stupid characters doing some disgusting things. For a viewer, it is usually very hard to reconcile aversion with appreciation, but Kim’s films normally do that. In that way, “Pieta” is another original Kim Ki-duk vision, which demands enough curiosity to swallow the revelation of the master plot.

A man on a wheel chair wraps a thick chain around his neck. The chain descends from a hook. He presses a button and with mechanical whir, his body is lifted from the chair. A high-pitched scream is heard. “Pieta” opens with these shots and then travels faster to a failing urban industrial district to establish the character of Gang-do (Lee Jeong-jin). The 30 year old man has no friends, lives alone in a small apartment and has intimate relations with his pillow. He is a debt collector for a local loan shark. However, he is not the regular anti-hero, who has certain rules in collecting the debts. Gang-do’s dead eyes glow with pride when he is sadistically crippling and maiming the poor debtors, especially to cash in on their insurance claims. 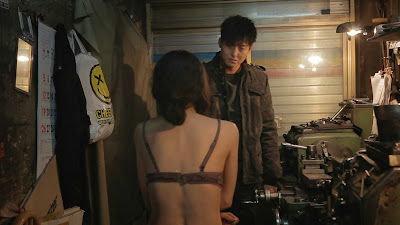 One day, a middle-aged woman (Cho Min-soo) follows him and shows up at his apartment begging for his forgiveness. She claims that she is her mother, who has abandoned his when he was an infant. Gang-do treatment after hearing this shocking: he pushes and slaps her and even sexually assaults her. Despite Gang-do’s nature, she follows him around to see his ceremonious limb-crushing job. He also beings a phase of gradual transformation and eventually believes her. He submits at her feet with an emotional dependence of a child. Mother’s unbridled love makes Gang-do to fail at his job and this opens the door for vengeance as well as redemption. 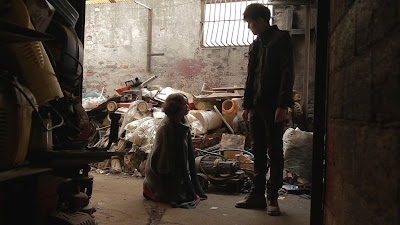 The film’s title “Pieta” is actually taken from the famed Christian sculpture depicting the Virgin Mary cradling the corpse of Jesus Christ. So, at the center, Kim Ki-duk deals with the undying love of a mother for her son. Love’s power is always a bit complicated, since it changes the giver no less than the recipient. The film’s devastating final frames implies this, as the mother stands at the top and cries for the fate of her ‘sons.’ Kim Ki-duk ventures into a darker territory when he takes the subject of capitalism and money.  All the debtors, who are at the mercy of Gang-do, have failed in their pursuit of money. Russian auteur Balabanov’s “Cargo 200” portrayed the collapse of a system based on a rigid belief (Communism). The system here (in “Pieta”) is exactly the opposite. 'Rigid Faith' is replaced by ‘money.’ The money in this failed industrial capitalist town cranks out downtrodden people like metal parts from a factory. (Gang-do asks, “What is money?” “The beginning and end of all things” replies his mother). 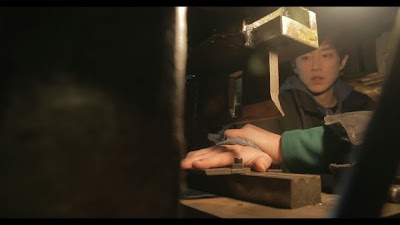 Kim’s economic film-making is visible as he has cheaply shot in a digital video. It is actually good, since the grimmest corners of the city (claustrophobic alleyways, living places and industrial shops) takes the center stage rather than the movie’s melodramatic plot. The bloodcurdling violence often happens off-screen, which is more menacing since it makes our imaginations run wild. We can easily predict where the story is heading but the film’s soul stirring climax gives a message that is deeper and blacker. At times, frustration sets in, which is actually usual for a Kim Ki-duk flick.

“Pieta” is a tough but an enigmatic and rewarding movie experience. It asks tough questions and provides no easy answers. There is lot of madness, but Kim never loses sight of the value of love in this dirty, indifferent world.