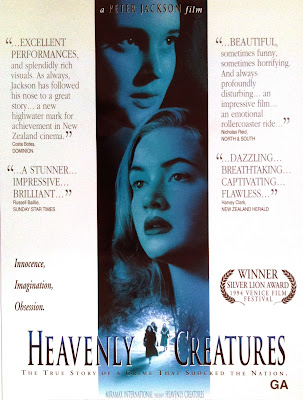 He was once known for his inventive splatter, sci-fi movies – “Bad Taste”, “Brain Dead” – which gained the status of cult classics among his fans. His foray into the digital film-making era was a grand success. He perfected the expansive vision of J.R.R. Tolkien and bathed our eyes with exuberant landscapes of New Zealand. But, apart from these polarized visions, the New Zealander Peter Jackson, made the startling “Heavenly Creatures” (1994) – a re-telling of the 1950’ tabloid murder. It is the story of an exceptionally powerful love and explores the explosive world of high-hormone adolescence, capturing its characters' chilling detachment from reality.

"Next time I write in this diary, Mother will be dead. How odd, yet how pleasing." “The deceased had been attacked with an animal ferocity seldom seen even in the most brutal murders.” The first quote was from Pauline Rieper’s diary, a miserable 15 year old girl. The other quote is from the police reports. The 1954 infamous matricide in New Zealand involved two ninth-grade girls – Pauline and Juliet. Peter Jackson’s movie is doled out from the court transcripts, interviews and from the extensive diaries of Pauline and Juliet Hume. The film-maker observes the event from the fantasy-filled world of those two girls. Surprisingly, “Heavenly Creatures” is even-handed and never judges the films’ lead as some kind of monstrous sprouts. 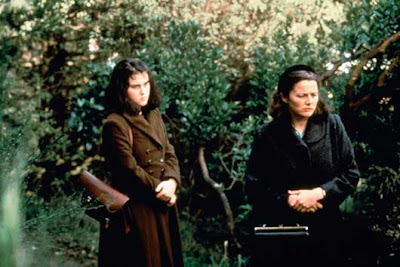 In the beginning of the film, we get to see Pauline’s (Melanie Lynskey) photo of her class at a girls’ school in Christchurch, New Zealand. She sticks out among all those blond-haired girls. She is the fat girl with unruly black curls. Her mother (Sarah Pierse) runs a clean boarding house. Pauline snapped out of her shell when Juliet (Kate Winslet) arrives from England. Juliet is an imperious, beautiful girl, who shares Pauline’s disdain of parochial Christchurch society. Juliet provokes hostility with her French teacher by merciless correcting the teacher’s grammar. Pauline is curse with a bone disease and stays from the athletic life of her classmates. The fairy princess Juliet’s curse was tuberculosis. The girls’ curses add another common status as the ‘invalids.’

By constructing an elaborate fantasy world, derived from the myth and pop culture, both Pauline and Juliet live in the land of ‘Borovnia’ – creating stories of bloody revenge and sexual escapades. Pauline’ working-class parents and Juliet’s cosmopolitan parents eventually decide that the girls have been spending too much time together. Juliet’s parents make a decision to cure her ailment by sending her to aunt in South Africa. In the face of a inevitable separation, the two girls head down the insane, murderous path. 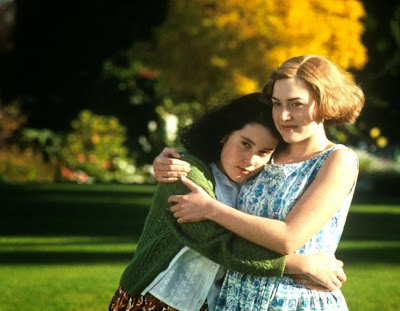 Peter Jackson and his co-writer Fran Walsh have painstakingly established the weird trajectory of the girls’ friendship. They didn’t turn the girls’ romance into what someone would call as ‘lesbian film.’ The 50’s were the time, when homosexuality was seen as pathology. The murderous instincts of these girls could have been easily remonstrated with the words ‘homosexual.’ The script views that theirs is a great romance, which falls into unclassifiable territory, neither misconstrued nor innocent. On the directorial level, Jackson sends his camera racing, feverishly following the girls as they run breathless through the woods. The aggressive shooting technique leaves no stationary movements. Jackson’s usual tongue-in-cheek humor is evident in the films’ first frames. He registers Christchurch as a peaceful, well-ordered place through a 1950 newsreel and immediately cuts to the brief glimpse of murder scene. 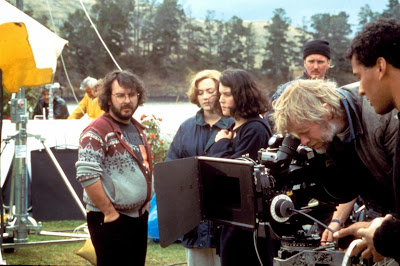 Melanie Lynskey in her first film remains quietly smoldering as the delicate Pauline. Both Melanie and Winslet (her first movie too) never turn their characters into monsters. They play them with utmost sympathy and their chemistry carries the movie from its stagnant moments. Sarah’s guileless performance as Pauline’s mother brings an emotional heft to the movie. The script shows her as a frightened woman, who has made lots of mistake in the past. So, somehow her character sees the wrong steps of Pauline but remains incapacitated to correct her daughter’s mistakes. “Heavenly Creatures” leaves out the objective facts of the crime, since the viewpoint is objective. This may irk viewers who expect a crime/murder story.

“Heavenly Creatures” doesn’t give any answers to the girls’ crimes: Whether the fault lies with the girls, or with the cramped morality of the time? However, this powerful, wide-open question is what makes this movie an unforgettable experience.

Rated R for a chilling murder and some sexuality
at November 15, 2013
Email ThisBlogThis!Share to TwitterShare to FacebookShare to Pinterest
Labels: Based on True Story, Films from 'Down Under', Hard-Hitting Movies

Ooooo the plot the subject and from what i read even the treatment is not meant for faint hearted!

I really liked your blog and have nominated you for the Liebster Award. You can visit the link http://life-with-anand.blogspot.in/2013/11/liebster-award-nominations-and-questions.html

@ Richa Singh, Thanks for the comment. The movie is not so violent when compared to contemporary movies, but the theme is a bit disturbing.

@ Anand, thanks for nominating me for the award.

I watch it last night after reading your review... I must say it was quite disturbing but barring the brutal ending (it reminded me of Kieslowski's A short film on killing) I enjoyed the movie a lot. Thanks for making me watch it!!!

@ Murtaza Ali, I am very glad that you watched this movie after reading my review. I hope Peter Jackson makes movies like this than being stuck in the Hobbit land.