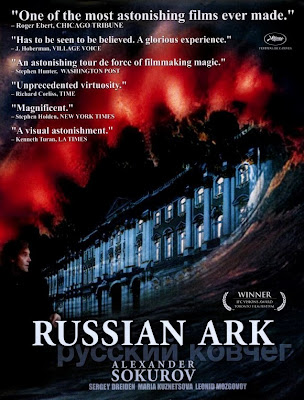 Russian auteur Alexander Sokurov is known for his intelligent films, which often moves in a dream-like fashion into the Russian culture. His movies are glacially paced and approach thematically colossal objects from an odd angle. The perfect example of this is his 2002 sublime film, “Russian Ark.” This movie had the longest continuous take in the history of motion pictures (95 mins.) until this year. Swedish film “7333 Seconds of Johanna” recently broke this record with a running time of 122 mins. With thousands of costumed actors “Russian Ark” seamlessly flows in a single tracking shot. But, apart from the logistical and technological achievement, this is one of the best contemplative cinemas about history and time.

The imaginative film is set inside St. Petersburg’s ‘Hermitage museum.’  A mysterious man or the narrator (entirely shot from his POV) – who is of course Soukrov – finds himself inside St. Petersburg Winter Palace, in the early 18th century. He seems to be invisible to others and is baffled about how he came here. He soon meets a sophisticated 19th French Diplomat Marquis (Sergei Dreiden). Marquis is also displaced in time, but is perfectly visible. The two witness scenes from the Russian history as they take a stroll through the enormous palace: Peter the great trouncing one of his generals; Catherine III watches a play about herself and frantically searches for a pot to piss in. 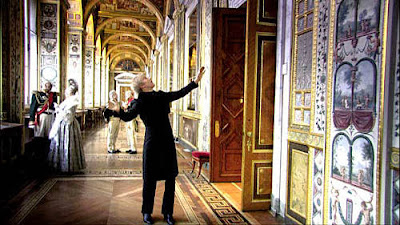 Few moments later, when they open a door of a museum gallery, we catch up with 21st century museum-goers. Marquis meets Hermitage Museum, director. The narrator recognizes the men and marquis has a fractured conversation about Italian painting. Later, Marquis is guided by a blind woman – identified as an angel – through the dazzling collections of painting. The blind woman was a great connoisseur, who elaborates a Van Dyck painting of Madonna and child. Each fly-on-the-wall scene takes us through massive art collections and important historical events -- the Czar’s official reception for a Persian ambassador – while meandering on the social and political issues.

Reading the plot, it might sound like a dry Russian historical lesson, but the opulent way in which Sokurov has shot this movie is like taking a strangest amusement park ride. Imagine making a movie inside a 150 room museum with nearly 2000 extras in period costume (including live orchestras). All of the actors should be at the exact place and must speak their lines with split-second precision, since there is no second take. But, this is not just a stunt or a gimmick. A viewer can really feel the movie’s unparalleled visuals as if they are floating about the Russian cultural cloud. Cinematographer Tillman Buttner slowly peers into each artwork, doors, and windows, delivering the treasure trove of culture. People perfectly fall and slip on cue within the slightly wide-angled field of vision. In the royal ball scene -- towards the ending -- the camera waltzes behind hundreds of dancing courtiers. Sokurov’s final flourish – coming down the expansive staircase – adds a different meaning to the long take.

“Russian Ark” is not just an eccentric film-maker’s approach of historical fiction, by constructing a staged chronology to represent key events. Sokurov does not totally indulge a viewer with the dramatized glimpses of historical figures. He wants the viewer to feel the mystification. A traditional art film – on this subject -- would employ several long, static takes, by toying with frames, but giving in lot of context. However, Sokurov’s approach is the exact opposite. By elaborately explaining the arts and politics, he gives in many key details, but provides very little context. So, this style forces us to focus on the visions of two floating persons. This sense of artificiality and handling of history is more about aesthesis rather than explanation. A cinephile will be engrossed in this bizarre experience, even if he/she is totally unfamiliar about the Russian history or arts. 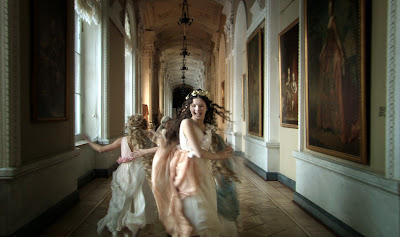 The final reference to the Ark of the Bible is sumptuous. It says, like the Ark, the majestic buildings of St. Petersburg have only carried a select group of inhabitants through riotous currents of tide and time. The reference also contemplates on the survived Russian culture – as the movie ends with the line, “we’re destined to sail along forever, to live forever.”  As the slightly puckish and flamboyant diplomat, Dreiden is strange enough to keep the viewer momentarily lost in time.

Sokurov’s “Russian Ark” draws us into the strange, vibrant world and gives an unforgettable and unparalleled cinematic experience. It has such a hypnotic intensity to behold.

Very well written! This one has been pending for quite some time now... your review tempts me to watch it right away. I have been a fan of Sukrov ever since I watched his brilliant Faust (2011) - a breathtaking improvisation on the classic German legend of Faust. The riveting film won Sokurov three awards at the 2011 Venice Film Festival including the prestigious Golden Lion.

Do check out the following review of the film:

@ Murtaza Ali, Thanks for the comment. I haven't seen Sokurov's "Faust." But, after your words and Mr. Jugu Abraham excellent detailed movie essay. I have a great urge to watch more of the Russian master's movie.

A different film, I was intrigued to see it because of the single-take.

Have your seen Baraka?

@ Ravi, thanks for the comment. Yeah, i have seen Ron Fricke's "Baraka" and "Samsara," which i thought were serenely beautiful to watch.