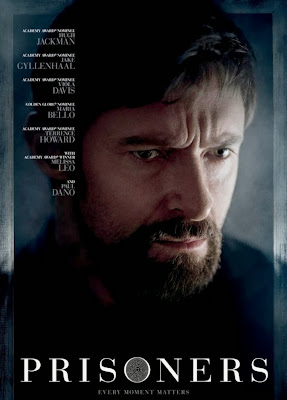 Hollywood Whodunits are always wrapped inside certain genre trappings. It either becomes an unemotional police procedural or a stripped-down Dennis Lehane like tale. But, like David Fincher’s “Se7en”, “Zodiac” or Clint Eastwood’s “Mystic River” there rarely comes out a Hollywood crime/drama, which haunts in all the best ways – psychologically or philosophically. French Canadian director Denis Villeneuve’s auspicious American debut “Prisoners” (2013) belongs to that rare kind. It has all the general trajectory of a whodunit thriller, but takes its time to explore each characters involved. It is a tragic tale of violence against children, which might grab you, extracting the expected levels of grief and anger and all the while making it hard to shake it away.

It is another Thanksgiving Day in a small town, in western Pennsylvania. The weather is moody and chilly. Keller and Grace Dover (Hugh Jackman and Maria Bello) visit their friends and neighbor, Franklin (Terrence Howard) and Nancy Birch (Viola Davis) along with their teenage son and kid daughter. The Birch’s have two daughters, both at the same age group as of Dover’s. The kids Anna Dover and Joy Birch are playing around the neighborhood, when they come across creepy RV parked in front of a house. The teenagers Eliza Birch and Ralph Dover takes the kids away from the camper and figures that someone is watching from inside. In the late afternoon, the teenagers have crashed in front of TV. The couples are having one of their heart-pouring conversations. 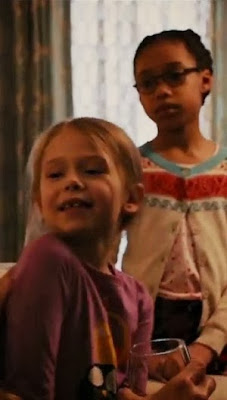 The kids want to get a whistle from Dover’s house. After getting the permission from their parents and without the help of their siblings they have gone outside. Keller, the bearded survivalist, first realizes the girls’ absence. Soon, panic and fear sets in. After a quick neighborhood search and recon, Keller gets to know about the RV and he calls the police. Detective Loki (Jake Gyllenhaal) is a tattooed lone-wolf cop, who never failed to solve a cast. He is sitting in a diner when he gets a call about the missing children and the RV. In his pursuit, Loki finds Alex Jones (Paul Dano), who at first hides inside the rotten RV. However, it soon comes to light that Alex lacks mental capacity to successfully to do a kidnapping.


Keller incites Loki not to leave Alex. When Alex gets released (after 48 hours), Keller confronts him in the parking lot in front of the media. In a hushed tone, he says, “They didn’t cry until I left them.” Alex goes with his reserved aunt (Melissa Leo), who has raised him. The wounded Keller becomes a vigilante when he kidnaps Alex. He brings him into his old, desolated house and intimates his friend, Franklin. On one side Loki is considering all the possibilities, whereas Keller resorts to brutal torture methods to extract a confession from Alex. The trauma brings a venomous stress on the families as the clock is ticking away. What happened to the girls? That will not be the only question in your mind, when watching this hand-drawn puzzle. 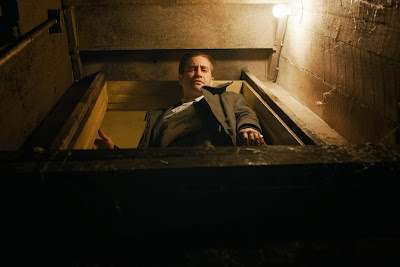 “Prisoners” is not a “Taken” kind of story, where a rogue father saves his daughter. The characters etched out by screenwriter Aaron Guzikowski are down-to-earth people. They don’t have enough mental strength to cope with the tragedy. Although, Keller is the leading man, he is not a hero. He succumbs to darker inclinations and justifies his torture methods without confirming whether Alex is guilty or not. When Keller lashes out unimaginable violence on Alex, the horrified Birch confronts him asking, “Have you lost your mind?” He replies, “Do you have a better idea?” So, as a viewer we feel sympathetic to this man and at the same time we can’t approve this man’s wrath. Aaron, not only interweaves the families’ agonies, he also brings in an enigmatic police figure, Loki. This slick haired, tattooed investigator suggests that he also has come from a dark background. The writer alludes that the police work is Loki’s way of exorcising the demons of his past. The script also has biblical imagery at every corner. The snakes and mazes are written in to show the movie’s main theme – rebuking God. The layers of social allegory are not hard to uncover. I can’t talk about the way the film has ably handled the child abuse because that would spill some important plot points.

Dennis Villeneuve’s 2011 drama, “Incendies” is about the terrible legacy of a sectarian war. It was definitely robbed of its Best-foreign film Oscar. Now, he makes his Hollywood debut with a star-driven endeavor, which might force directors to certain changes. But, Villeneuve’s astute directorial methods take a good leap from the last movie. He cleverly mends the serial-killer genre tropes without totally relinquishing them. His deft direction is evident, when he makes the character’s torment to enter into our bloodstream. Each and every frame conveys the feeling through a menacing wintry landscape. Veteran cinematographer Roger A. Deakins’ grey and brown palletted cinematography brings takes a viewer into the setting with a charge of free-floating fear. The rain never looked so miserable as in “Prisoners.”


The five members of this first-rate cast have previous Oscar nominations. Hugh Jackman’s Keller gives the most noteworthy performance of all the members. As a builder, hunter and grief-stricken father he shows more depth with his characters than he has ever done in his career (including the Oscar nominated “Les Miserables”). Like Ryan Gosling, Gyllenhaal continues to power through the darker roles. His performance reminds us of characters from classic noir films. Maria Bello and Viola Davis heart-breakingly show us how broken woman deal with emptiness. They are underused but amply convey the overwhelming despair. The moon-faced Paul Dano’s underplay makes us ask whether he is a villain or not? 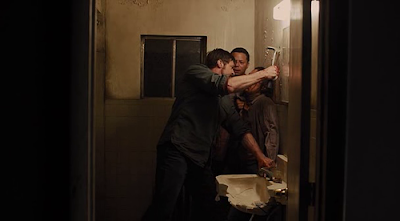 “Prisoners” raises moral questions about vengeance, vigilantism, innocence and guilt. It resists many of Hollywood’s dogmas. If you have the patience to get inside this dark, sleety vision, you might feel that this is one of the best vivid, unsettling and unexpected thrillers of this decade.